I'm not so sure about this for several reasons.

As a collector of old glass plates, I have many hundreds from France, I don't think I ever found one of that age in that type of envelope, all mine were generally boxed and labelled.

The writing on the envelope appears very modern and the term Photocrom definitely doesn't refer to this type of photography.

When the plate is removed from the envelope, whilst partly obscured by the hand, the subject appears to be written as Cat, odd given this is a French speaking part of the world.

The images themselves are just too sharp, even in full daylight those animals would have had to remain perfectly still for some time to achieve this result with the camera equipment available at the time.

It all just seems to convenient given the posters background.

And just to be nitpicky, surely the title of this should be "Prints Glass Plate Negatives" given no developing takes place, the plate is already developed?

You know, I had the thought.. It just seemed so nice.

It always does. This is how Jesus ends up on toast - so that a thousand credulous newscasters can end their evening on a "lighter note" complete with media-ready 15-second clip. "Well, Janet, I guess we've always loved cats." (anchors chuckle and tap their notes)

Here's my beef: If you know anything about photography, you know that it used to be a bitch. If you've been doing it for a while you even remember. Cyanotype? yeah that's a bitch. 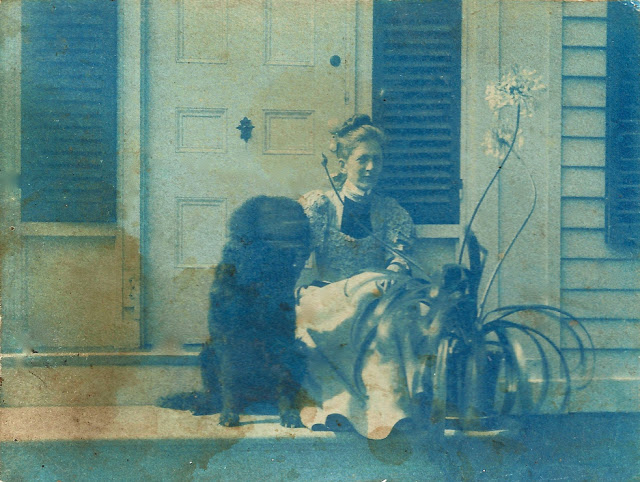 and this truly majestic cat photo from the article. 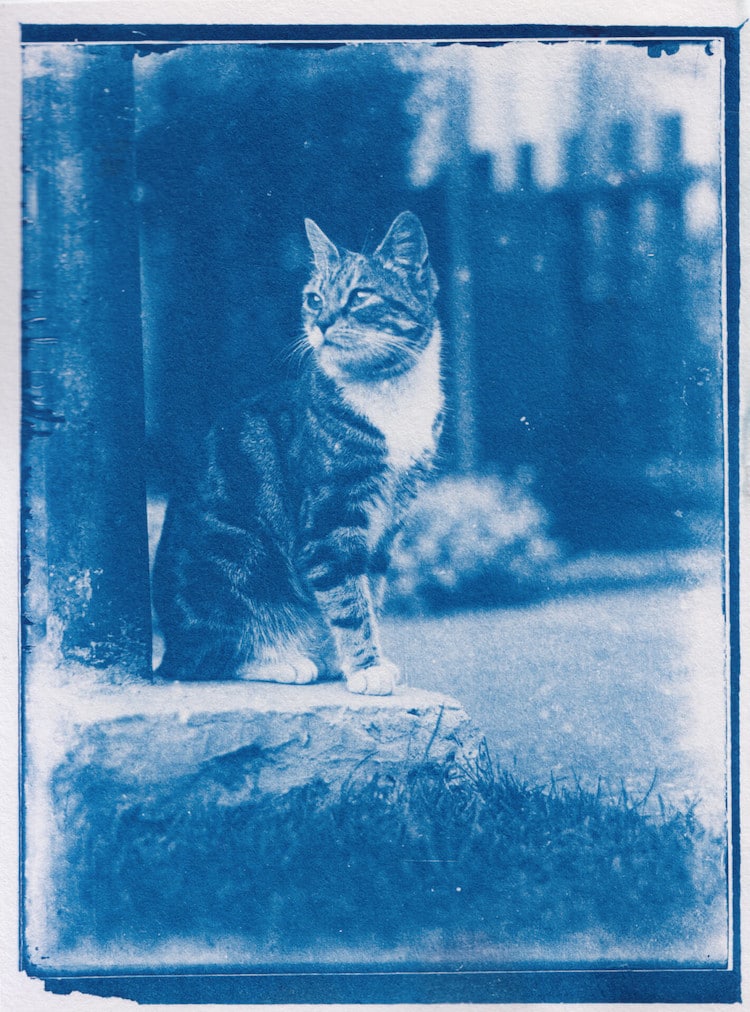 Few things about the Edwardian image. First, the depth-of-field is near-infinite. I worked with a Voigtlander Bessa-L from 1929 and it had a lens that would go from about f/5.6 to f/22. That cat? You can see how there's about a six-inch patch of grass that's in focus with everything falling off on either side. This is possible because you can buy an f/1.2 lens on Amazon for $1300, something our mysterious undiscussed Belle Epoque teenager couldn't do. More importantly, though, shallow depth-of-field photography has never been particularly popular outside the Internet, where it has become a stand-in for penis size because that lens costs $1300. It was virtually unheard of in professional photography until the late '70s/early '80s and even then didn't show near the "look how big my lens is" pompousness on display here.

Notice the dog in the Edwardian photo, and the plants. There's profound motion blur on both because when the photographer tells everybody to stand still, only humans listen. This is a photo taken at magic hour, full sun to the left of the image, and you've still got a half inch or more of movement captured in the alliums. The cat? You can count the hair in his ears. That's a 1/500 or 1/1000 shutter speed. In 1900 Eastman Kodak introduced the Brownie and marketed it heavily to children. Brownies would do 1/30th of a second on roll film. A 1904 Century No. 2 will go to 1/200 (and f/5.6).

Finally, look at the delicate "age damage" on the cyanotype. Notice that there's no fogging, no hazing, no wear other than some obvious mechanical damage. Obvious mechanical damage that extends exactly as far as what's visible, no further; there's no collateral hazing or lifting. It's almost as if someone used their Canon EOS to take pictures of a cat, knock the chroma down to zero, make a glass plate negative of it and then put it on their blog with an ass-ton of affiliate links.

Look - if there was so much as a bored housewife in 1900 taking pictures as good as that cat, I wanna know about her. She was a goddamn prodigy. She had absolute killer equipment and she used it better than anyone of her generation. If I'm a photography enthusiast I'ma shoot a damn documentary about this lady. This is like the Antikythera mechanism for photography nerds. But instead we've got a guy going "hey guys found this time capsule be sure to hit subscribe and sign up for my patreon using the link." And I mean, you type his name into Google and the fourth link is his Facebook page, which is titled "experimental photographer/viral filmmaker."

But nobody does that anymore.

Ancient photography is hard core. Ancient photography is badass. Cyanotype? Fuck cyanotype that shit stinks and it disintegrates in sunlight and anyone who romanticizes cyanotype never had to deal with actual blueprints because you legit can't look at them in a closed room for more than a few minutes because they give you a headache. But more importantly, tell me something interesting, don't make up a story so you can push more traffic through your affiliate links.