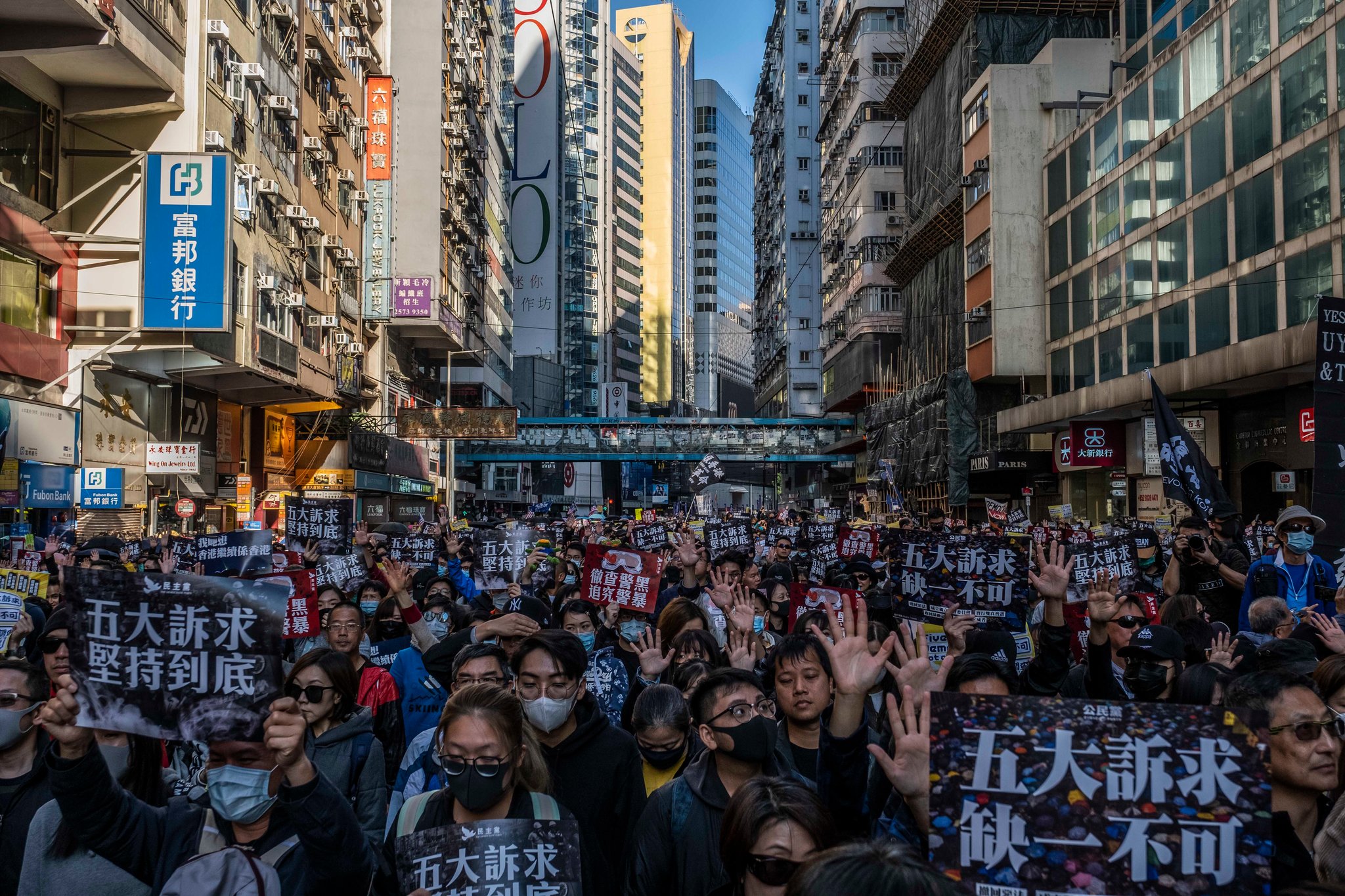 HONG KONG — Hundreds of thousands of protesters, basking in a recent election victory by Hong Kong’s pro-democracy camp, poured onto the city’s streets on Sunday in one of the largest marches in weeks to pressure the government to meet demands for greater civil liberties.

The huge turnout was a reminder to China’s leader, Xi Jinping, that the monthslong campaign against his authoritarian policies still had broad support in Hong Kong despite a weakening economy and increasingly violent clashes between protesters and the police.

Tensions in Hong Kong, a semiautonomous territory, had eased somewhat in recent days, after pro-democracy advocates won a stunning victory in local elections two weeks ago, giving new hope to the movement.

On Sunday, demonstrators returned in force, packing city streets to denounce Mr. Xi’s government, rail against police brutality and reiterate demands for greater civil liberties, including universal suffrage. They beat drums, sang protest anthems and chanted, “Fight for freedom.” Though the march was largely peaceful, some demonstrators vandalized shops and restaurants and lit a fire outside the high court.

“We want Hong Kong to continue being Hong Kong,” said Alice Wong, 24, a biology researcher who stood among protesters gathered at Victoria Park. “We don’t want to become like China.”

As many as 800,000 people attended the march, according to Civil Human Rights Front, an advocacy group that organized the gathering.

The mood at the march was relaxed, with people taking selfies against a backdrop of the vast crowds. Children, some dressed in black, marched with their parents, holding hands as they shouted, “Stand with Hong Kong!”

A sea of protesters, spread across several miles, filled major thoroughfares as they moved between towering skyscrapers. In some areas, there were so many people that the crowds moved at a snail’s pace and spilled into adjacent alleys. Some small businesses encouraged the turnout by promising giveaways if more than one million people joined the march.

The protesters said they intended to remain peaceful on Sunday, but some vowed to use more aggressive tactics if the police cracked down. In the evening, the police readied canisters of tear gas as they stood opposite crowds of protesters who had barricaded a street downtown in a briefly tense moment.

The large turnout could further embolden the movement’s confrontational front-line protesters, who said they planned to disrupt the city’s roads and public transportation system on Monday. The call for further action seemed to resonate among some protesters on Sunday.

“If the government still refuses to acknowledge our demands after today, we should and will escalate our protests,” said Tamara Wong, 33, an office worker who wore a black mask as she stood among the crowd gathered at Victoria Park.

The protesters have demanded amnesty for activists who were arrested and accused of rioting, as well as an independent investigation of police conduct during the demonstrations.

Despite the show of strength on Sunday, it is unlikely that the protesters will win further concessions from Beijing, which has worked to portray demonstrators as rioters colluding with foreign governments to topple the governing Communist Party.

Jean-Pierre Cabestan, a professor of political science at Hong Kong Baptist University, said that even though Sunday’s march showed the protest movement remained strong and unified, Beijing was unlikely to listen to its demands.

“Hong Kong is condemned to live in a permanent political crisis as long as China is ruled by the Communist Party,” Professor Cabestan said.

Mr. Xi, who has cultivated an image as a hard-line leader, has demanded “unswerving efforts to stop and punish violent activities” in Hong Kong. He has publicly endorsed the city’s beleaguered leader, Carrie Lam, to bring an end to the unrest.

Chinese officials have suggested that the United States is responsible for helping to fuel unrest in Hong Kong, pointing to statements by American officials in support of the protests. Last month, President Trump signed tough legislation that authorizes sanctions on Chinese and Hong Kong officials responsible for rights abuses in Hong Kong. The move was welcomed by many protesters but also seen as exacerbating tensions between the two countries.

In a possible sign of increased scrutiny of American citizens working in Hong Kong, two leaders of the American Chamber of Commerce in Hong Kong said on Saturday that they had been denied entry to Macau, a semiautonomous Chinese city. Mr. Xi is expected to visit Macau this month to mark the 20th anniversary of the former Portuguese colony’s return to China.

Tara Joseph and Robert Grieves, the president and the chairman of the American business group, said they had planned to attend an annual ball put on by the chamber’s Macau branch.

“We hope that this is just an overreaction to current events and that international business can constructively forge ahead,” Ms. Joseph said.

The protests, which began in June in opposition to a bill that would have allowed extraditions to mainland China, has hurt the tourism and retail sectors, pushing the city’s economy into recession.

In recent weeks, the violence has escalated, with protesters intensifying their efforts to vandalize businesses they associate with hostility to the movement. The police shot an antigovernment protester last month, inflaming tensions. Then, in some of the worst violence, universities became battlefields, with black-clad students hurling gasoline bombs, throwing bricks and aiming arrows at the riot police, who shot rubber bullets and fired tear gas in return.

Many demonstrators acknowledge that a compromise with the government is unlikely, despite recent victories. Mrs. Lam, the city’s leader, who is under pressure from Beijing to restore order without weakening the government’s position, has brushed aside their demands and has warned that the mayhem could “take Hong Kong to the road of ruin.”

Government officials have cast the demonstrations as primarily centered on economic issues, arguing that vast inequality in Hong Kong has exacerbated anger among the city’s youth. They rolled out emergency measures recently to counter the effects of the turmoil on the economy, including providing electricity subsidies to businesses and expanding job training for young people.

The authorities have justified their efforts to crack down on the movement by saying that protesters are endangering public safety. On Sunday, the police said they had found a 9-millimeter semiautomatic pistol, five magazines, 105 bullets and two ballistic vests, as well as fireworks, among other items, during a series of early morning raids.

Senior Superintendent Steve Li of the Hong Kong Police said early in the day that officers had received information that the firearm and fireworks would have been used on Sunday to create chaos.

The police have in recent months banned many protests and rallies in Hong Kong, citing safety concerns. But the government granted a rare approval for the march on Sunday, which was held to mark the United Nations’ Human Rights Day.

Demonstrators said they believed that the turnout sent a strong message: The protest movement would not back down.

“If the government thinks that we will give up,” said Adam Wong, 23, a university student who was waving a black flag, “today’s turnout will prove them delusional.”