Both the Central Intelligence Agency and the Pentagon have used the weapon while closely guarding its existence. A modified version of the well-known Hellfire missile, the weapon carries an inert warhead. Instead of exploding, it is designed to plunge more than 100 pounds of metal through the tops of cars and buildings to kill its target without harming individuals and property close by.

To the targeted person, it is as if a speeding anvil fell from the sky, the officials said. But this variant of the Hellfire missile, designated as the R9X, also comes equipped with a different kind of payload: a halo of six long blades that are stowed inside and then deploy through the skin of the missile seconds before impact, shredding anything in its tracks.

Details about the secret weapon and its deployment were confirmed by more than a dozen current and former U.S. officials. Its development and use haven’t been previously disclosed, though its existence has been the subject of speculation.

The R9X is known colloquially to the small community of individuals who are familiar with its use as “the flying Ginsu,” for the blades that can cut through buildings, car roofs or other targets. The nickname is a reference to the popular knives sold on TV infomercials in the late 1970s and early 1980s that showed them cutting through both tree branches and tomatoes. The weapon has also been referred to as the Ninja bomb. 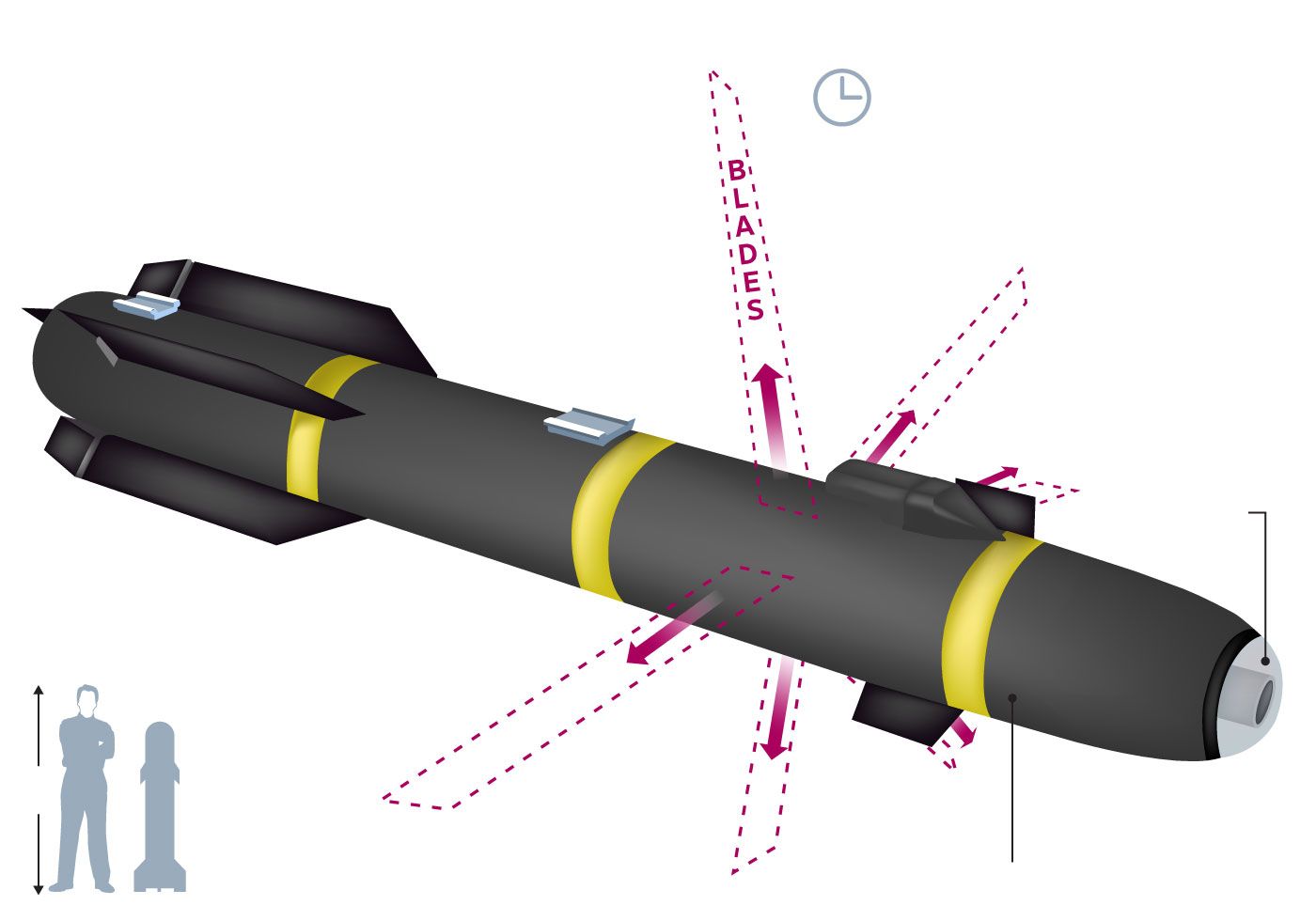 The missile was born of an emphasis, under former President Obama, on avoiding civilian deaths in long U.S. campaign of airstrikes in Afghanistan, Pakistan, Iraq, Syria, Somalia, Yemen and other locales. Aside from humanitarian and legal considerations, civilian casualties can undermine popular and allied support for U.S. strategic goals.

But there was another reason for the weapon, officials said: Increasingly, terrorist fighters were adapting to U.S. airstrikes, hiding among groups of women and children to put themselves out of reach.

The weapon was under development as early as 2011. A missile with similar capabilities was considered as a “Plan B” to kill al Qaeda leader Osama bin Laden in his compound in Abbottabad, Pakistan, that year, according to several of the officials.

The weapon is used infrequently, employed only in specific circumstances, particularly when a senior terrorist leader has been pinpointed but other weapons would risk killing innocent bystanders, the officials said. Conventional Hellfire variants are more typically used against groups of targeted individuals or against a so-called high-value target who is convening with other militants.

But when a lone individual is targeted, the R9X is a sought-after weapon. The Defense Department has used it only about a half-dozen times, officials said, including in operations in Libya, Syria, Iraq, Yemen and Somalia.

The Wall Street Journal was able to confirm two specific strikes in which it was used, one by the Defense Department and one by the CIA.

In January 2019, Jamal al-Badawi, accused of being behind the bombing of the USS Cole in 2000 in a Yemeni port, killing 17 American sailors, was killed by an R9X fired by the Pentagon. The Pentagon has acknowledged the strike, which occurred in Yemen, though not the specific munition involved.

In February 2017, Ahmad Hasan Abu Khayr al-Masri, an Egyptian national who served as al Qaeda’s No. 2, was killed in Syria’s Idlib Province by an R9X fired by a U.S. aircraft operated by the CIA. The CIA doesn’t acknowledge airstrikes it carries out.

The aftermath of such operations has prompted speculation about a possible new weapon among those who were there or viewed photos. The strikes bore no resemblance to the damage normally wrought by U.S. airstrikes.

A Hellfire, which is a little more than five feet long and weighs just over 100 pounds, typically leaves behind mangled, burned-out shells of vehicles, surrounded by debris and scorch marks over a large radius.

The R9X leaves no such signature. Photographs of the aftermath of the strike on Mr. Masri show an oblong hole torn into the roof of the car in which he was riding. There are no burn marks suggesting an explosion. The windshield of the Kia sedan is cracked, but the car’s windshield wipers are still in place.

One former U.S. official said the weapon addressed a longstanding “right seat, left seat” problem, suggesting it is theoretically possible to kill someone sitting in the passenger seat of a moving car, but not the driver. (Two militants reportedly were killed in the February 2017 strike.)

Because of the secrecy surrounding the weapon, the Wall Street Journal was unable to learn certain details about it, including its precise development timeline. The CIA and the Pentagon declined to comment.

Development and refinement of the weapon drew impetus from Mr. Obama’s policy announcement in May 2013 that set new rules for using lethal force outside of declared war zones such as Afghanistan. When taking action, there must be “near-certainty that no civilians will be killed or injured,” Mr. Obama said then.

The weapon was developed “for the express purpose of reducing civilian casualties,” a second former official said.

A third former official said the weapon can be used when there are doubts about the structural integrity of a building, such as a mud-and-thatch hut, where a terrorist is located. It could kill the terrorist without collapsing the building and injuring or killing everyone else inside, this person said.

The U.S. officials said extraordinarily accurate intelligence about a target’s location and surroundings are needed to use the weapon. But there is also an intelligence and cost benefit, they said. Because the weapon minimizes the risk of civilian casualties, there are more opportunities to take a shot, reducing the number of hours the military has to keep surveillance and armed aircraft aloft.

President Trump in March rescinded an Obama-era requirement for an annual report of civilian casualties from airstrikes outside of conventional war zones. Mr. Trump has also given more flexibility to conduct drone strikes to the CIA, which faces fewer requirements for public accountability than the U.S. military.

Two of the officials who agreed to discuss the secret weapon said they believed the U.S. government should have acknowledged its existence years ago. Doing so, one said, would send a message to the Islamic world that the U.S. takes extraordinary care to avoid civilian casualties.

Sarah Holewinski, who has advised the U.S. military on reducing harm to civilians in warfare, cautioned that if civilians know about weapons such as the R9X, they may take fewer precautions against exposing themselves to risk from airstrikes. She said she hadn’t been aware of the R9X’s existence.

But Ms. Holewinski, a senior fellow at the Center for Civilians in Conflict, said “there appears to be a ton of benefits” from such a weapon.