My 91-year-old mom fell again and had partial hip surgery: repair not replacement. I have more to say on this in due course.

I only contacted my four scattered siblings about this most recent fall. My youngest brother is an Orthodox Chassidic Jew and a few of his 12 children have joined the Lubavich movement, also known as Chabad.

My brother's family lives in Jerusalem. My brother's children do not speak much English, but one nephew is studying in Brooklyn. Let's call him Benji.

I get an email from Benji entirely in Hebrew:

I send it to mivasairski for a translation.

He writes back saying that Benji is coming soon to visit his grandmother.

Whaat? This sounded like a lot of work for me. How was he coming? Did I have to pick him up at an airport?

My mother is doing better, but has to learn to walk. She graduates from the Surgical Ward to Rehab: another ward, another building. I'm with her the whole day. I forget about Benji. Then I get a call. He's on his way. Where should he go?

He's in Toronto. He had driven for ten hours from NYC, bypassed Hamilton Ontario where I am. He was now going to drive back, during rush hour. I tell him the hospital address.

I get a WhatsApp text from another nephew in London UK (whose English is pretty good) saying that Benji has NO phone and NO data and couldn't understand the location I gave him and could I text the location to the nephew in London who would get the message to Benji. I guess he will use the psychic paging system.

We wait. I have no idea where Benji is. I text the number he had called from earlier.

It was a borrowed phone. I can't reach him. By 8:15 my mother is falling asleep.

I’m ready to leave the hospital. I happen to look out the 8th floor window and see someone straight out of 18th century Poland standing by a huge U-Haul truck.

I take the elevator down and run across the street to talk to the driver. I say in Hebrew, "Where is Benji?” I know that much Hebrew.

He says Benji went up to the 8th floor. Back up I go and find him trying to explain who he is and who he is looking for to the bewildered nurses. I’m just in time to rescue them - and him.

My mother is conscious enough to have some words with him. He sends greetings and messages from the family. He says to my mother, "I haven't seen you in 10 years." Just before he leaves, I remembered the hubski demand: "Pictures or it didn't happen." I manage to shoot this: 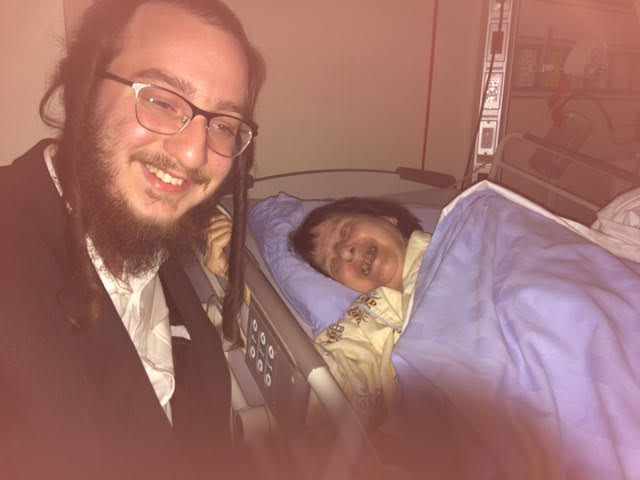 What I didn't know is one of Benji's friends was moving from Brooklyn to Toronto and asked three classmates to drive a U-Haul to Canada. None of their phones had service in Canada. I invited the three drivers to stay the night, but they had to return the truck. So back they went on another 10-hour drive, stopping only for a visit with Benji's grandmother. They said that they will drive all night switching drivers every few hours.