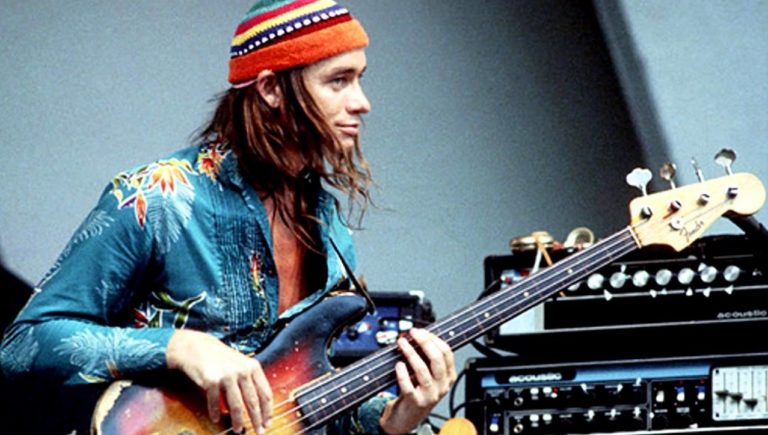 In Tiburon, CA there was this little upstairs club called The Dock; a small narrow place with a long bar on the left, a piano on a little 4-inch high riser on the right, and probably 15 2-top tables. Total capacity of the place was probably 50 people.

Halloween 1986. My band (swampy blues, Elvin Bishop kind of band called “Hu Yu Kiddin?”) has a gig at a Halloween dance at a high school near Tiburon, and I go walk around Tiburon looking for dinner before our show. I’m 18 years old, wearing red skin-tight Levi’s, motorcycle boots, my new Smiths “Queen is Dead” t-shirt, and this insane West Point cadet’s jacket that is half cut with long tails, and two rows of enormous brass buttons down the front. I’m a metalhead, and I’ve got long curly hair down to my nipples.

Anyway. I eat. See a flyer for Jaco playing tonight at The Dock, and then go to my show. I think, “hey, if we finish up early enough, maybe I’ll come see Jaco play...” 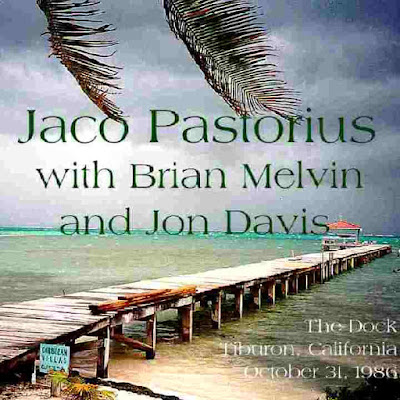 I guess we ended about 10:00, so I packed up my stuff quickly and drove back to The Dock. (Yeah, I’m 18, but I don’t look it, and have been playing in, and going to bars, for a couple of years. Never get carded, but have a fake ID, just in case.)

When I came in he was playing, and had been for a while. There’s maybe 30 people in the place.

I sit at the bar, right near the piano. There’s just enough space for people to walk between the bar patrons and the piano; I could reach the piano with my foot without getting off the barstool. I mean, the place is NARROW.

There’s Jaco, a drummer on a little 5-piece jazz kit, and a pianist. No amplification, except Jaco has a small amp, like a Fender Bassman 15, or something.

They play two songs, I think, and take a break.

Jaco comes over to the bar and sits down next to me, and strikes up a conversation.

Jaco: “Yeah! Love your outfit. Saw you walking around town earlier, and I thought, ‘when THAT guy shows up, I can really start to play!’”

We then just sat and chatted for about 10 minutes, then he said, “ok, I gotta get back on stage.”

I didn’t know his songs well, at that point, so I don’t know the setlist. But at one point he just started jamming some great tune with the band, and eventually he took turns on each instrument... started on bass, then took over the drum kit and played with the pianist, then he switched to piano, and his band were sitting at a table and watching with the rest of the crowd.

He then went back to bass, cranked up the little amp so it got all fuzz distortion, and ripped through the Star Spangled Banner, playing the Jimi Hendrix version from Woodstock, note-for-note WITH all the feedback and guitar pyrotechnics. Jimi’s version ends by going into Purple Haze, so Jaco does the same; the band rejoins Jaco on stage, and they ran thru a blistering version of the song. (Turns out, after a little Googling, I found that the entire show was recorded.)

And there were probably only 20 people there, by then.

After the show he came back and sat down with me at the bar again. People would interrupt and ask for autographs, or shake his hand. We talked about everything, and shut down the bar together.

He was staying somewhere close by. So I told him about my other band, and that we had practice the next day. “Do you wanna come by and jam?”

“Sure!” He says. So I give him the address and draw a map on a napkin for him, and we go our separate ways. (That’s how we did it before smartphones, kids! :)

He never showed up.

He died the next year.

That’s the only time I ever saw Jaco play, and it was long before I’d gotten deeply into him, or truly understood what a magician he was.

Maybe that’s what he liked about me; I wasn’t a fanboy... I was just a long-haired kid in a groovy jacket. I never even asked for his autograph. Had my bass in the car, too... could’ve had him sign it! But nah... the memory of that night is a special treasure... just him and me, shooting the shit over drinks at the bar...

(Footnote: I originally wrote this as a stream-of-consciousness thing on my cellphone, when I woke up one morning. Working entirely from memory. Later, I sat down and did some googling and found the flyer for the show and the recordings. If you listen to the recordings, you'll realize there are two guitarists listed as well. As much as I rack my brain, I have ZERO recollection of there being any guitarists at all. Memory is a weird thing.)

What a wonderful story, thank you for sharing - one of the true bass legends.

you are my favorite always

Now I'm listening to Jaco Live albums and trying to put together my ten favorite bass players of all time list.

I think I prefer his live recordings to the studio ones... there's more heart and passion in the live ones, I feel. When he's playing with Zawinul and the other heavies, he is really deeply in his head, and in the music theory, and I feel he loses the grooviness he could deliver.

That's why "Come on, Come over" is one of my favorites. It feels like he is really loose, on that track, and just smiling his big ole grin the whole way through...

Damn, what a night. Jaco is one of the biggest legends in bass.