It's an interesting argument. I will say though, that wouldn't the government being forced to break apart major technology companies be a form of control in and of itself?

Consider the following. Facebook grows to become the only website on the internet. Everyone spends their time on Facebook-owned services. Social media is a niche platform, moreso than web browsers, operating systems, Standard Oil. It is a lot easier to switch websites than an oil company. Consequently, everyone becomes subject to Facebook's moderation. But, the internet still exists, and I can create a website no problem, except nobody would use it. That happened when Reddit users attempted to jump ship to Voat years ago.

So now the government decides Facebook is too big. They want to break it apart into smaller sub-forms, presumably with the intent of bringing back competition and allowing diversity of expression. Only problem is a) the government decides which rules are arbitrary and which are not, not the market and b) now we have a bunch of medium-sized players, each with their own set of the exact same rules because they're all competing with eachother. It's like having five big banks instead of one. You're going to get the exact same service and restrictions, with very slight variations.

Part of the issue with freedom of speech is it will always be a nebulous concept. Technically, you are free to do whatever the hell you please. The only laws binding you are the physical constraints of this reality. Jump off a building type shit. But then you have laws, which are nebulously defined in themselves as they're always subject to interpretation (is yelling "I have a gun?") free speech? What if I'm on stage performing a play? At this point the community determines what's allowed and what isn't, and the whole artifice essentially breaks down.

So you have a community of legal interpretation deciding what is or isn't capable of getting other human beings to throw you in jail. That's the only legitimate-use-of-force (thanks Weber) way to make somebody shut up. But, society, you know, the animal carcass you carry around in the present moment, one doesn't say or do certain things because it will make your life hell. If you wear a clown costume to work, if you dye your hair a funny colour, if you become an advocate for unpopular opinions or viewpoints, you might find your most valuable resource - other human beings no longer want to associate with you. That creates lost profits, reduced income, fewer opportunities for advancement, social isolation, inability to find romantic partners, even worse, possible institutionalization or death.

In practice "freedom of speech" really means, "freedom to say what you want provided it doesn't make you lose your food, water, and shelter." Wanting more than that creates further limitations. And if Facebook can create more jobs by blocking certain speech, who is free?

I will say though, that wouldn't the government being forced to break apart major technology companies be a form of control in and of itself?

Yes. As John Locke would say, the very control that we enter into a social contract to engender.

Only problem is a) the government decides which rules are arbitrary and which are not, not the market

Correct. This is the fundamental basis of antitrust law. The argument is that the government has interests other than the profit and health of the company monopolizing.

b) now we have a bunch of medium-sized players, each with their own set of the exact same rules because they're all competing with eachother.

Also correct. Allow me to give you an example of how this works in practice:

Now: you're poor and you wanna have a baby at my birth center. The state pays the same regardless of who you go with. You pay nothing. But me? I'm the business that fosters the competition here. See, you may come in having selected United Health to manage your Medicaid plan. You're going to talk to my receptionist and she's going to say "yeah, United's... okay? but they hassle you like hell on the following standard procedures we have to do, they tend to kick claims back twice as often as anybody else and their wait times are usually around twenty minutes. Molina, on the other hand, gives you a representative to call, rarely fights any of the stuff we do and oh hey, come to three scheduled visits before your due date and they'll give you a $100 gift card to buy a car seat."

These are not hypotheticals. no names have been changed. We jump through the hassle of getting people free car seats (it's a lot of paperwork) because we don't have to deal with United on the back end. So there it is. Market forces at work in managed care. The monopoly blown up into five (or more) competing factions, all working with the same size piece of the pie.

Part of the issue with freedom of speech is it will always be a nebulous concept.

Doesn't really matter tho because Doctorow's whole point is that poor application of anti-trust law creates de-facto free speech issues through the simple action of monopoly power. Fundamentally, the existence of monopoly allows the monopoly power to set whatever standards they want through market forces. The examples used are clear: eventually no one will be able to talk about politics because anywhere you're likely to talk about politics are under the control of a corporation that can exercise its free speech rights to control its environment. No animal carcasses necessary: if Google decides they'll only allow searches from people wearing clown shoes, we'll all end up with a pair of clown shoes by the end of the week.

"b) now we have a bunch of medium-sized players, each with their own set of the exact same rules because they're all competing with eachother. It's like having five big banks instead of one. You're going to get the exact same service and restrictions, with very slight variations..."

And even more importantly, all the same people still working on the same projects, with the same internal knowledge of the others, friend circles, and back-channel communications. So now you have institutionalized insider trading and back-channel cooperation making their products work better than any competitors' could. (See: MS Windows and MS Office.)

The only antitrust model that would work to break up a company like FB, would be to sell the IDEA to a third party (the IP, and possibly the codebase), and to close down the existing product.

So suddenly there is no Facebook, no Instagram, no Messenger. Those apps just stop working for 7-8 months until a new company can be formed, a new dev team can be hired (with NONE of the previous company's employees), trained on the code base, and then patching all the "holes" where their code (say, Instagram) integrated with FB and Messenger, so the app is "whole" and can work as a stand-alone app...

And now all the "users" need to redownload the app from the new company - call it "Latergram" - and set up new accounts, and all their previous data is lost, and...

Yeah. Breaking up a tech company will never work.

You can only kinda gently force them to open up to competition, a la Microsoft v Java, which STILL wound up in MS completely fucking Java, and then releasing an identical product that was Windows-only (C#), with hard-wired access into secret OS calls that made it completely fail on any non MS-owned OS or Browser.

This isn't hard at all. You say "your business is illegal. You are no longer allowed to make money on it." Suddenly Facebook can no longer collect ad revenue on FB or Instagram. The court gives Zuck 30 days to wind things down and let people download their data.

See, I don't know the answer there. But I know that suddenly we've introduced two or three different dimensions of vendor competition. Maybe I pay $10 a month to keep my shit completely locked down and roam freely over the rest of BookFaceNet with all my data intact. Maybe the kidz all install BookFaceTock because their favorite K-Pop star lives there.

I could break up fucking Facebook tomorrow. I could break up Microsoft tomorrow: M$ is no longer allowed to sell software. That means there's a trillion dollar market of businesses who need their M$ shit supported. Remember - theoretically docx is an "open protocol" (lol) so I just need to find the vendor that will disrupt my life the least while not ruining me in the process. 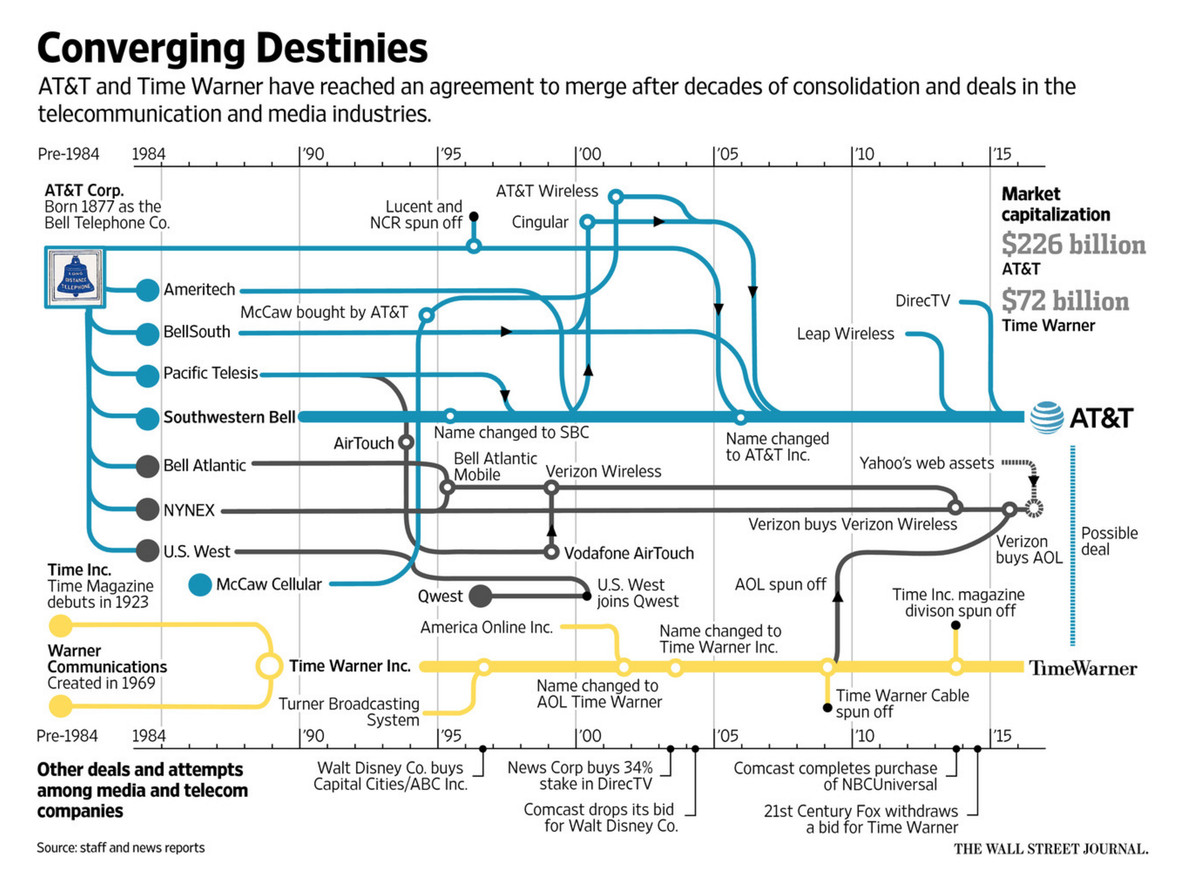 We wouldn't even have the Internet if Bell hadn't been broken up. What would we have right now if, instead of making a movie celebrating what an amoral dipshit Zuckerberg is, we tore Facebook the fuck down?

I still contend that you are going to put 2500 programmers instantly out of work, they will be hired instantly by others, and they will communicate via back doors and WhatsApp with each other, and collude in the dark to make their "friends" apps more successful and better integrated, and just build more impenetrable - and now diversified - defenses against competition.

Do whatever you want to the business... the cogs that make that business work, are still going to try and make their job easier (and the product more successful) in whatever way they can. And that'll involve back-channeling with the rest of the people they used to know at the Tech Giant that has just been broken up. Any new competitor outside of that whisper network is going to have a much steeper hill to climb to get to the same place.

It is, in a nutshell, why Facebook is evil: It isn't that someone at the top has an evil plan they have put in motion. It's because of the network effect of a million little bad decisions by thousands of programmers on long leashes, with little oversight or concept of what they are doing in the broader picture of the product, users, and society at large.

Now, instead of keeping all those evil little decisions wrapped up in one uber-evil organization, you send them all to the wind to do evil on their own... I just don't see that turning out well for anyone.

Facebook is evil because the way they make money is by selling access to their users. There has been no enforcement as to what their users own and what Facebook owns. Change the strategy from "sell our users' data for whatever we can get" to "sell our users' data for an acceptable profit margin because we now have to pay our users" and everything else takes care of itself. No "million little bad decisions" here - Facebook makes more money for better-targeted advertising and there is ZERO cost for increased targeting. Change that cost from "zero" to "anything" and suddenly there's a whole new business model.