I flew into Albany, NY on Sunday the 11th, rented a car and drove up to Newcomb, NY. Apparently a Buick Enclave is a mid-size SUV. The thing was huge. I didn't need to park anywhere small, though, and it worked out fine. Newcomb, NY is pretty small, and this part of the park is undeniably rural. Beautiful, but if I lived there it would take some time getting used to needing to drive twenty miles to find a gas station.

I got up about 4:15 Monday morning with one goal in mind: Allen. Allen Mountain is a little notorious among the High Peaks. It's 18 miles round trip, more than half of it is unofficial trail, and it's only a single peak for all that work. I left Newcomb about 5:00, getting to the trailhead at 5:30 and hitting the trail about ten minutes later. It was still dark, but there was a little gray in the sky. The first few miles of the trail are stupid easy and were easily navigated by headlamp.

My first view of Allen was through some blowdown through the early morning fog. 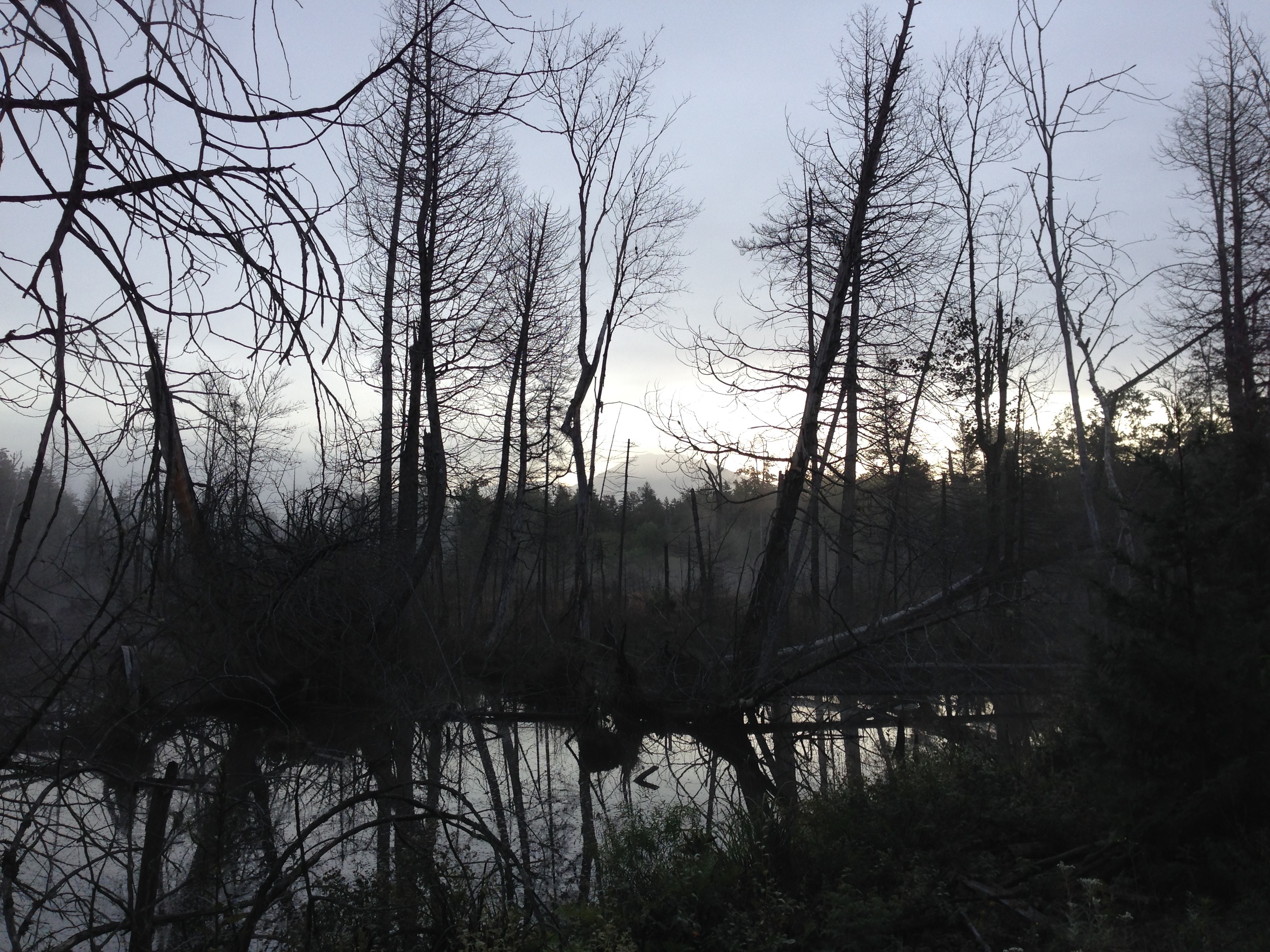 The official part of the trail was a breeze and made me want to take up trail running. The unofficial trail was pretty good, too. There were a couple brook crossings that might be difficult in high water, but it's been a dry summer. Finally I reached the real climb about seven miles in. Like most climbs in the Adirondacks, it follows a stream. Allen Brook has red slime, some sort of fungus, that is incredibly slippery. When it's wet, it's like ice. But its reputation is worse than reality. It's slippery, but it isn't constant.

On the way down I met two people, the only people I'd see that day. They were both faster than me, and the second caught up to me just as I was returning to the official trail. We hiked the rest of the way out together. My total time was ten hours, fifty four minutes.

I took Tuesday off from hiking to recuperate and relocate to Lake Placid. However, the weather forecast for Wednesday was pessimistic, so I ran a lap around Mirror Lake. It was about 2.5 miles around, so I added a little to round up to 5 km. The run felt really good. At first. Wednesday I was really, really, sore. The weather in Lake Placid wasn't that bad on Wednesday, or so it seemed. Having a free day, I drove up Whiteface Mountain. There's a road that goes nearly to the top. 3000' above Lake Placid, the weather was atrocious. Staying in was the right choice for me. It was windy, cold, and raining.

Thursday was another early day. I left my hotel around 5:45 with the goal of hiking Donaldson, Emmons and Seward mountains. The three form a ridge, and there's no reason to not hike them together. This hike was sort of like Allen, with a lead up of official trail and then a good deal of unofficial trail. The route I took forms a bit of a T with Donaldson near the junction. The trail up to the junction bordered on easy, but just past the junction was a difficult slab to get over to get up to Donaldson. As I passed the summit, I met the first two people of the day, two who were doing the same hike I was. On my way to Emmons, I got this picture:

Getting over to Emmons and back was pretty straightforward. Getting back down the slab by Donaldson, back to the junction, and down another slab toward Seward had me bump into the same two I saw earlier. They helpfully explained Seward wasn't as far as it looked (we could see it through the trees), and they were right. This was my view along the way:

On the way down, to my surprise I exhausted my 2.5 liter water supply. Helpfully, I had brought my filter pump, so I took a break to pump a liter of water out of the brook at the base of the ridge. I bumped into a few people hiking in late in the afternoon to spend the night. This was a 15.4 mile hike.

Friday was a lazy day around Lake Placid. I walked a bit to help keep my legs loose, and that was about it.

Saturday I wanted to do a straightforward hike. No unofficial trails, just a shorter hike to check off a peak I needed. Weekends can be busy, so I picked a less popular trailhead, hiking from the Rooster Comb trailhead up to Lower Wolf Jaw. I'd read about the hike, and every report said the same thing: easy to moderate until you get to the wolf's chin. Rock hopping up some small boulders took me to the base of a large slab. Against overwhelming odds, there's a tree growing in the middle of the slab. It helpfully provides some roots to grab and a firm place to plant a foot. Without that, I don't know if I could have made it up. But I did. Lower Wolf Jaw has poor views, but I got this on the way up: 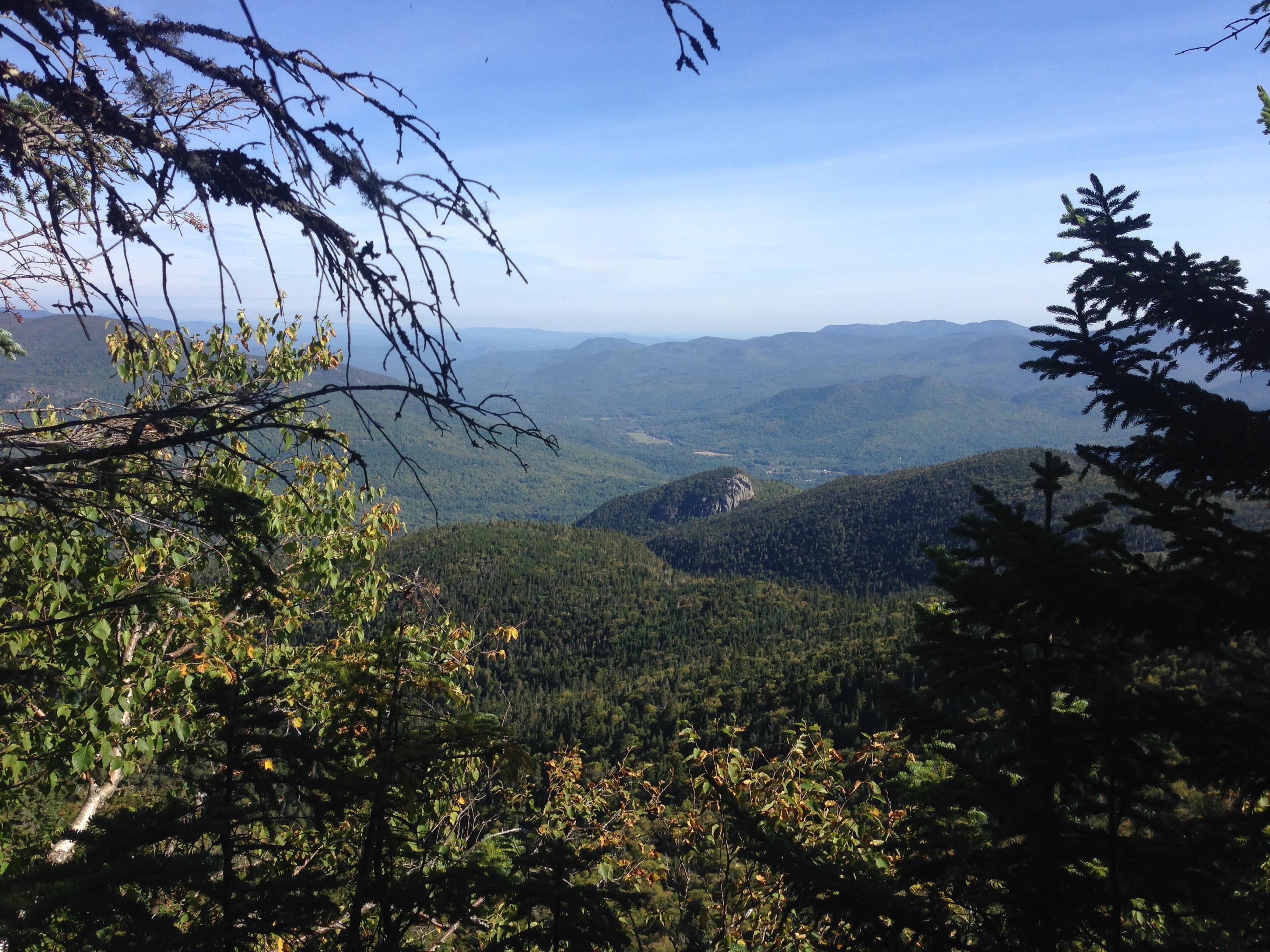 The cliffs in the middle are Rooster Comb, a lower summit and a side trip on the way down. The hike down was really nice, except for that wolf's chin. Lower Wolf Jaw is hiked more than Rooster Comb, but the Rooster Comb views are far better.

The notch to the right of center is the wolf jaws. Viewed from a certain angle, they look similar to an open wolf mouth. In the middle is Hedgehog Mountain, a minor summit with zero views. To the left is Giant Mountain.

I'd meant for this to be an easier day, and it was fewer miles (10 miles). But it ended up being the most elevation gain of my three hikes at 4655 feet.

In total, the three hikes were 43.4 miles and 13,555 feet ascent. There are people who can do all that in a single day, but for me this was a really great trip and set of accomplishments. Allen and Donaldson-Emmons-Seward in particular feel great to have behind me. There are 46 High Peaks, and this trip puts me at 25 completed. I have a mix of difficulties left. There are three hikes that are in the 18 mile range and four more around 15-16 miles. My goal is to complete the 46 by the end of 2018. If I made it a priority, and if I lived a few states closer, I could do it more quickly. But I like my current approach. Peakbagging shouldn't be a chore. I do it because I like it.

There is a star party up there in the late spring at the height of Galaxy Viewing Season. I'm itching to go as some of the regulars bring big fancy gear. The pictures look lovely and make me want to go even more.

Excellent, I'm there next month. This made me twice as excited, thanks.

Are you hiking as well? I'm a big fan of the area.

Hopefully a bit but unfortunately no time for full hikes, sadly. Also I daydream, so my 10-mile hikes turn into 15-hour excursions.

These trip reports are great. Hopefully you'll get to all 46 high peaks and get that bumper sticker. Not sure if you're a beer guy, but if you were around Lake Placid their brewery is pretty fantastic. Do you currently trail run?

I'm not really much of a beer guy anymore. From time to time, yes. I've definitely stopped in at the Lake Placid brewery; I ate there Thursday! It seems to be really popular with crowds even middle of the week. I had a glass of wine with my salmon sandwich.

I don't currently trail run, just roads. But when I look around Adirondack Park and locally, I think there's a lot I could do and enjoy that isn't road running and isn't summit hikes. I plot all my activities in Google Earth, and I have this fantasy of eventually connecting them all together instead of the mishmash of segments. Running some trail loops would be a great way to connect them.