So I’ve been meaning to post some of these for a while, but haven’t gotten around to it until today. I’ve been doing a lot of decoupaging on some of my off days and like anything else that takes practice, it’s both equal parts frustrating and relaxing. Sometimes it’s more one than the other. Unfortunately, since I give all of them away and don’t take pics of everything, this is just a handful of what I’ve made. They’re not the best, but I’m slowly getting better. If you zoom in on all four pictures and take a good look, you’ll see various characters where I’ve actually spent a lot of time cutting them out of the panels, making them stand alone images. I’ve actually gotten pretty good at that.

My friend’s boyfriend happens to be a pretty big Spider-Man fan, so I made this for her to give to him as a gift. He ended up loving it, which is great because this piece was hard to do. I’ve discovered that doing work on larger canvas pieces such as these are very difficult because A) canvas likes to flex making wrinkles a real possibility and B) when you’re trying to fill up something so large with such small images, you’re really tossing a lot of random stuff on there, destroying any real chance of having a good composition. That said, I was able to buy a ton of Spider-Man comics for dirt cheap, so I had a lot of material to work with for this one plus more left over.

(determinedkid, this is the one I was telling you about.)

This is another one I made for said friend. After learning my lesson with canvas, I decided to switch over to wood plaques. They’re much easier to work with as they’re smaller and don’t flex. It’s still a challenge to avoid wrinkling the paper, but much easier than with the canvas.

That said, I don’t know what happened with this one, but it didn’t really work out the way I intended it to. I knew she was a huge Kamala Kahn fan though, so I slapped a huge picture of her and and Carol Danvers as Captain Marvel. In the comic I cut this out from, the two were flying in the sky so the sun kinds of washes them out, causing the weird color. I was pretty disappointed with this all around and felt like this wasn’t a good enough gift alone, so I slapped together this for her . . .

I figure if her boyfriend is going to have a big Spider-Man canvas, she might as well get something to match. It’s a light switch, in case you can’t tell. I was much, much happier with this one. It was super easy to put together and all in all, I think it turned out more than alright. I think if I were to adjust one thing, I would have put Spider-Girl’s head on the bottom a little further to the right to balance things out. As it is, it’s a little left heavy. Oh well, lesson learned.

This one is my favorite that I’ve made so far. One of my friends is a pretty big fan of Captain America and while I’m not a Marvel fan, he’s one of my favorite Marvel heroes, so I’m glad this turned out well. The center image is Steve Rodgers from Rick Remender’s storyline “Castaway in Dimension Z.” I probably spent a good fifteen minutes cutting out that one image alone, trying my best to catch everything from the tears in his clothing to the dripping sewage. In all honesty, I don’t think I could have done better if given a second chance. My only regret is that you can clearly see where the panel this is from ends on the bottom and bottom left. I originally thought about covering it up with other pieces, but I thought Cap just looked so good, he had to be on top. In hindsight, I kind of wish I tried a little harder covering it up. Oh well, lesson learned.

So that’s what I have pictures of, guys. I’ll make more down the road for sure and maybe snag a few more pics to post on here before giving them away. I’m actually heading to two different comic shops today to pick up a few things, so I’ll browse through the dollar bins to see if anything catches my eye.

Have a good day guys.

I've made a ton of decoupage collages into art. 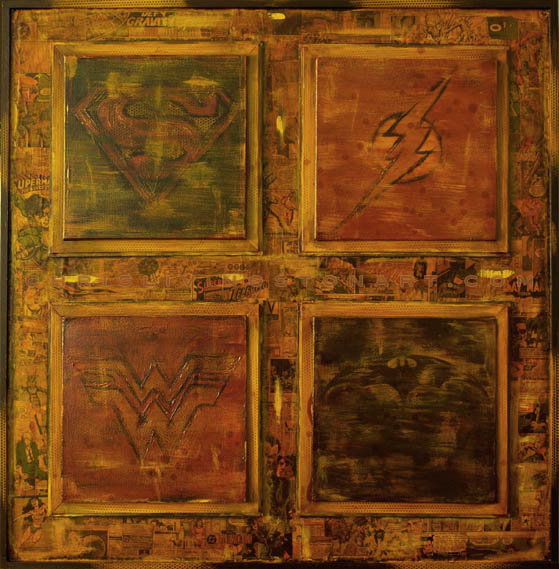 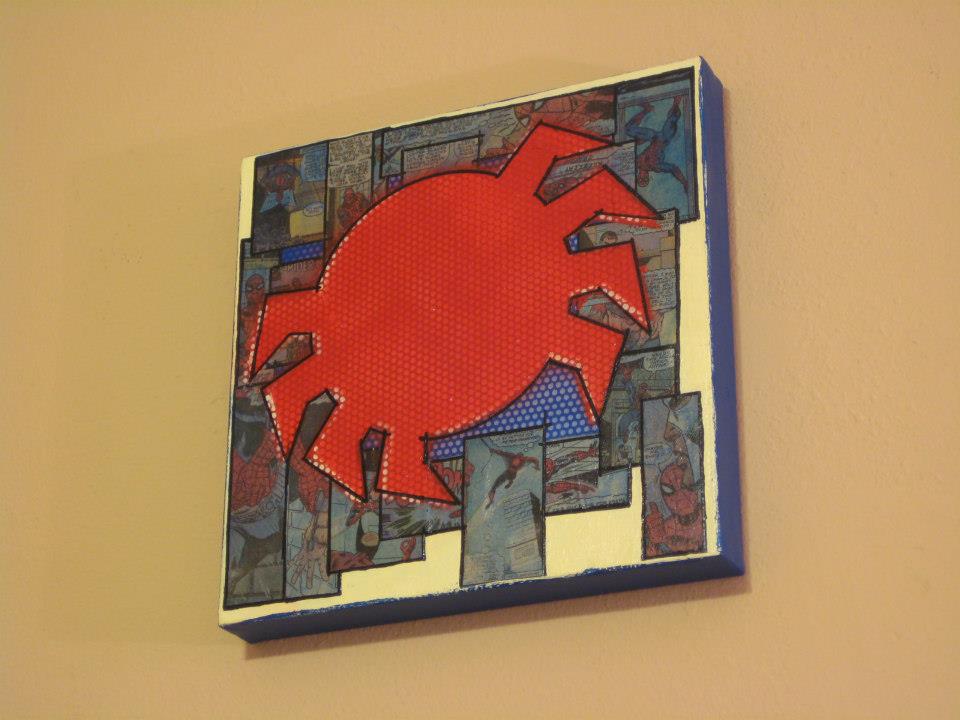 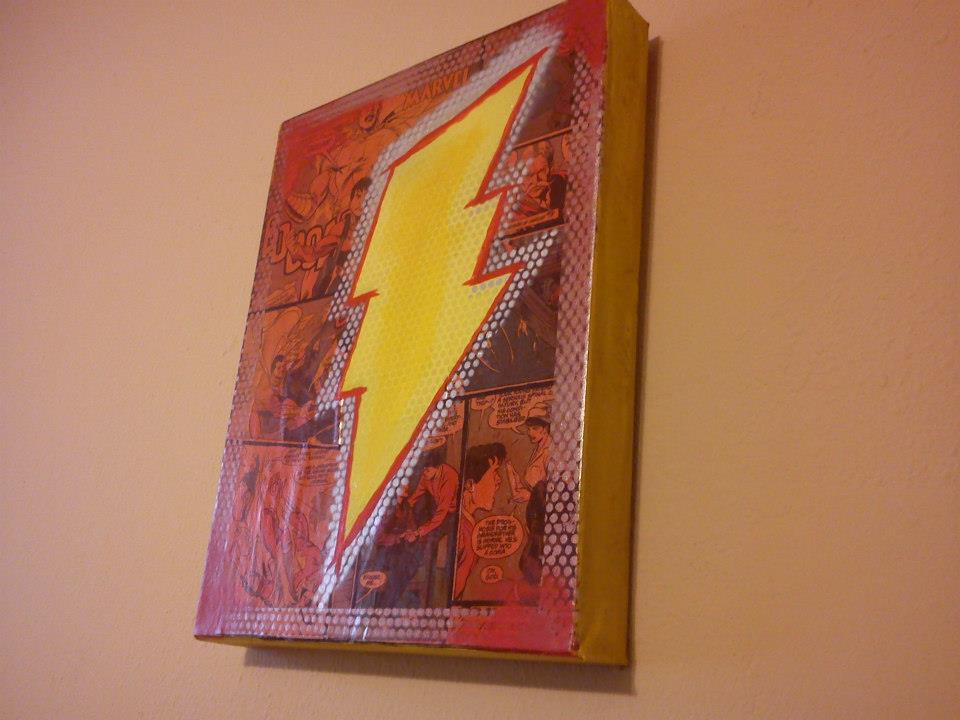 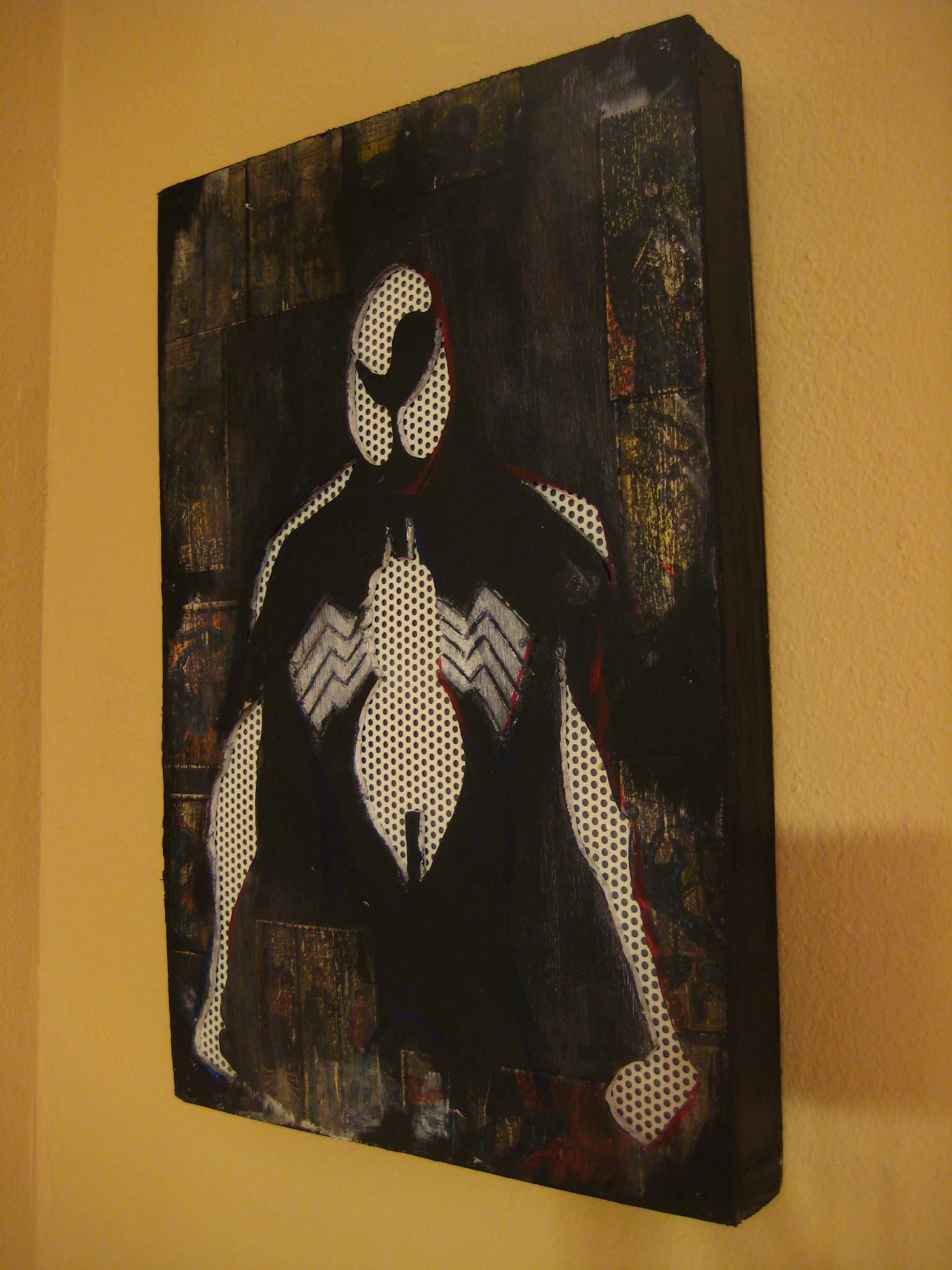 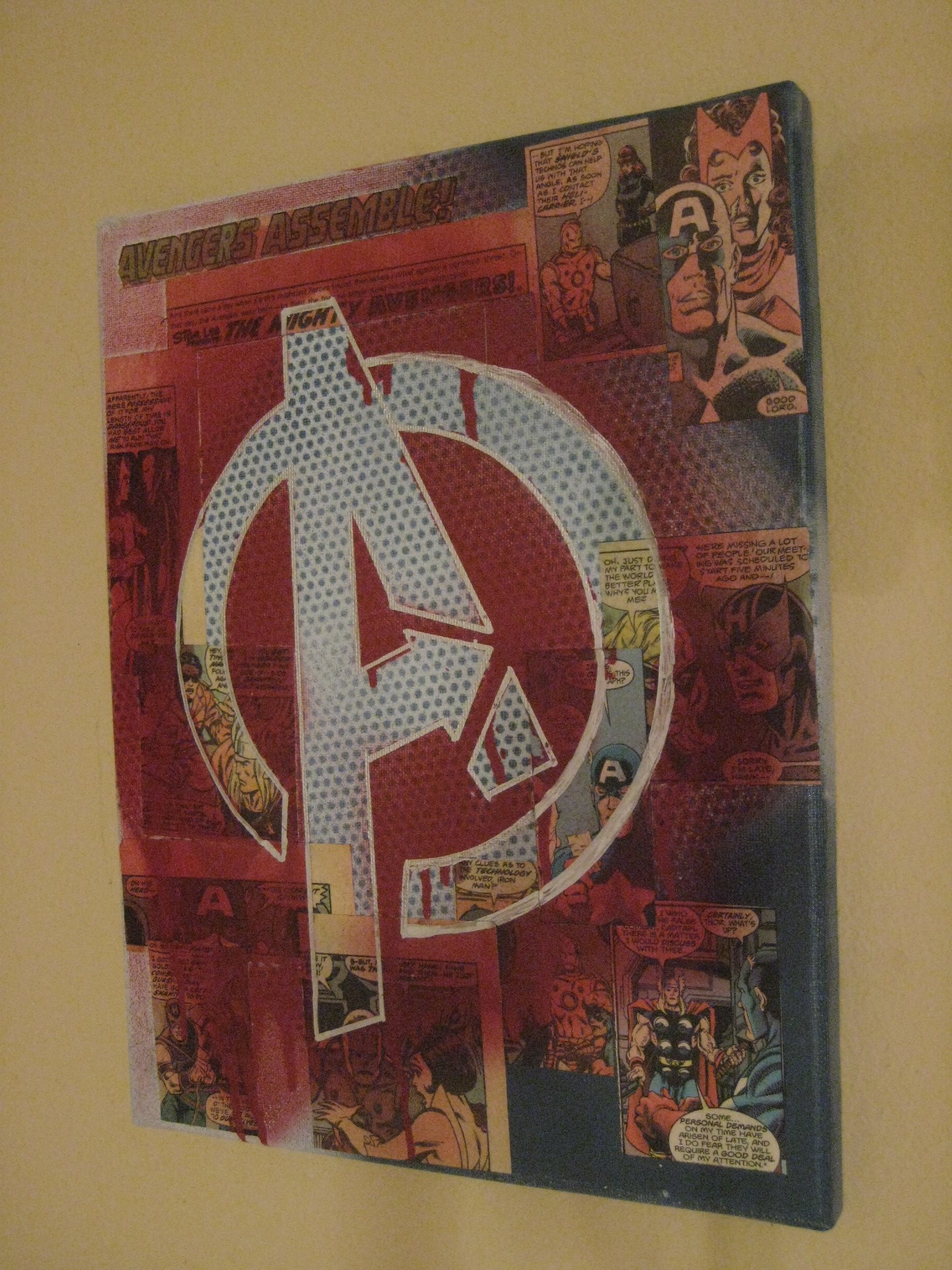 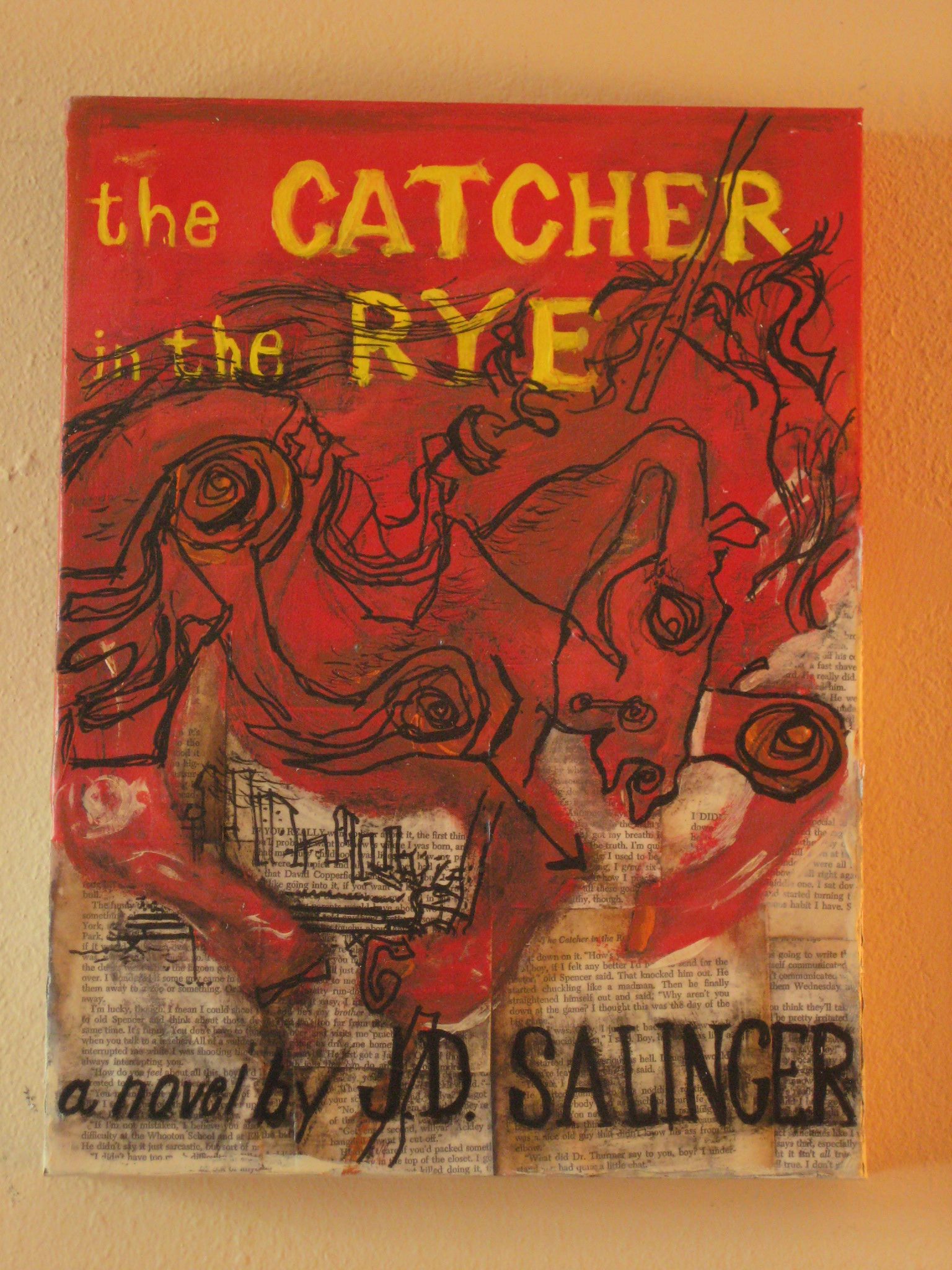 I got tired of repeating myself for two years or whatever and quit.

Dude. Those are beyond awesome. You really ought pick that back up. I'm hoping to incorporate paint in some of my works soon, I just want to get a bit better first.

I'm curious as hell. What technique did you use to get the mesh?

Edit: Have a badge man. I think they're great.

My dad sells metals so I used to have some perforated aluminum sheets. Perfect Ben-Day dots like that were a goal of mine for a long time.

It's all you man. If I come back to it I'll come back better.

Thank you. I have fun making them. :)

THIS IS SICK WTF.

I'm slowly getting better and I'm loving to learn this as I go. You should give it a shot. It's fun.