BECAUSE THIS ARTICLE WAS SHORT AND SIMPLE AS HELL AND BECAUSE I FUCKING LOVE THE AFRICAN SPOTTED DOG, HERE'S A BUNCH OF RANDOM FACTS ABOUT THEM BECAUSE THEY'RE FUCKING AWESOME!!!

While they're part of the whole "Dog" family, they're actually pretty far removed from dogs. The coyote and the wolf are much closer related while the African Dog is about as close as the Dhole. Fun fact, if you step back just a bit further in scope, you'll find the whole Canidae family is pretty damn similar with the exception of a few outliers such as the racoon dog.

Side Fact to Fact #1

Hyenas, while looking and behaving similarly to dogs in a lot of ways, are actually closer related to cats and civets on a genetic level. Don't ask me why. I'm not a biologist.

They're fucking big for "dogs." On the high end, dingos usually way around 40 pounds. Bigger coyotes weigh about the same. Most jackals are probably in the 20 pound range. Foxes, while pretty far removed, tend to weigh about 5-20 pounds depending on the species. The African Spotted Dog though? About 50 pounds. That doesn't sound like much of a difference, but these are hunters. That's ten extra pounds of muscle and fierceness. To the best of my knowledge, the only canine that is consistently bigger is the Grey Wolf at about 70-80 pounds.

Males and females split hierarchy roles for the packs. Males boss the males around, females boss the females around, and somehow, shit gets done. Additionally, for the sake of hunting, separate packs have been known to form temporary super packs when there's an abundance of food in the area that attracts multiple packs. 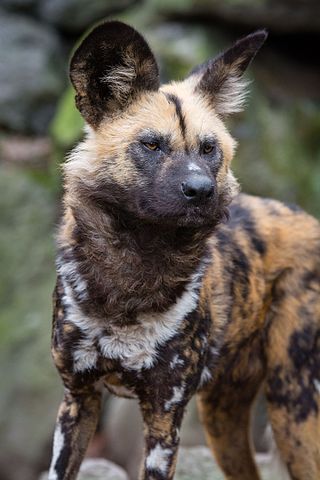 Don't let their looks disarm you though. They're not cuddly, they're not for interacting with, and they are fierce hunters who aren't afraid to fuck shit up. Brutally.

If you ever get the chance to see a documentary or read an article about the African Spotted Dog, African Wild Dog, African Dog, whatever someone is calling them, do it. They're fascinating as shit and a bunch of random ass facts double checked with Wikipedia so I don't look like an idiot doesn't do them even the slightest shred of justice.