I was going to say the same exact thing, excellent assessment. Nothing is going to come out of this, it's just a bunch of rhetorical mumbo jumbo CHARADE, per usual. Does anyone in DC go to jail or should I say, does anyone on the left go to jail?

Hey, when silicon valley is holding KNOWN fundraisers for Trump, how much is he getting in private? They know how much they stand to lose if it goes the other way, at this point. Does seem awfully fishy to me.

I remember that Team Murray X20R. Neighbor kid had it and I rode that off and on. Classic!

My neighbor had that Thunder Road. WOW, you just brought back a FLOOD of memories. Mostly, us crashing on the terribly maintained, steel mill days hills of Pittsburgh. Talk about crashing... potholes galore. We didn't care. 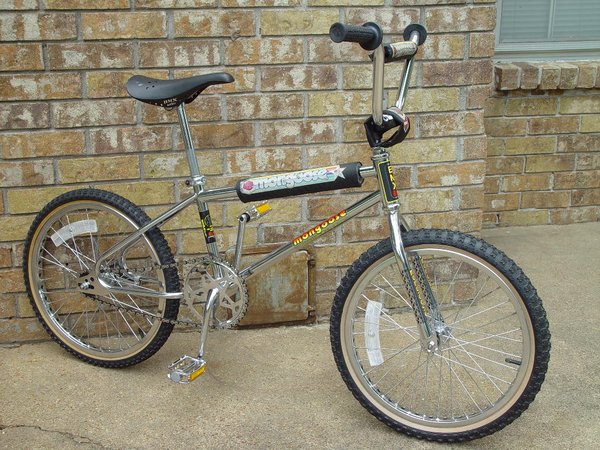 Jeebus, the last waterbed I was on, I think I was having sex with a high school gf, that was circa 1992.

My 9/11 connection, other than running from toxins in the air

This was when I was living in Queens and first tech job working for an Indian / American tech entity (developing WAP software, I was the marketing kid and they taught me some WAP cards development) called Zy Technologies. We were on 6th Avenue (AKA Avenue of the Americas) and 26th Street when the towers fell. So, yeah major plumes of smoke gushing up 6th.

We just thought it was it was an explosion or an accident, there was no way to tell, cops were directing everyone north (subway was closed), as there were no real alert systems (sounds funny right?) on mobile phones then. We actually ended up walking across the GW Bridge from The Bronx into Jersey to stay at a colleague's house, which was only around a marathon = 26 miles.

All of our clients were on Wall Street more or less, they were buying into WAP technologies at the time. Needless to say, we went under entirely and I ended up leaving NYC for Helsinki (for two years).

Two years later, when I got back to (my native) Pittsburgh and this is the weirdest part, I dated one of the pilot's daughter from Flight 77 (as you would imagine a nutcase because of it, granted loaded from the settlement). She wasn't too hard on the eyes, and we didn't stay together. I felt for her, but she was in deep pain and it was only cured by booze. She ended up dying a few years later, dating some big wig from NBC programming or the like.

Can all be searched, I can't post links yet.

Yes, they have. I am unable to post because I am a n00b even though ilex send me the ability via E-mail (it's didn't work, but I appreciate the gesture).

How the baby boomers — not millennials — screwed America

“The boomers inherited a rich, dynamic country and have gradually bankrupted it."

Everyone likes to bash millennials. We’re spoiled, entitled, and hopelessly glued to our smartphones. We demand participation trophies, can’t find jobs, and live with our parents until we’re 30. You know the punchlines by now.

But is the millennial hate justified? Have we dropped the generational baton, or was it a previous generation, the so-called baby boomers, who actually ruined everything?

That’s the argument Bruce Gibney makes in his book A Generation of Sociopaths: How the Baby Boomers Betrayed America. The boomers, according to Gibney, have committed “generational plunder,” pillaging the nation’s economy, repeatedly cutting their own taxes, financing two wars with deficits, ignoring climate change, presiding over the death of America’s manufacturing core, and leaving future generations to clean up the mess they created.

Well... I was born in 1973 and my parents are considered Baby Boomers. I like your explanation though ha... :-)

"How the American Medical Association deliberately created a U.S. physician shortage in order to protect jobs and inflate pay."

I now work in Medical and I would agree. They absolutely did that. There's plenty of evidence to support it too, I can't post links. I'm a n00b.

That's because Baby Boomers have FCKED you over so hard, you don't even know it. I'm a Gen X'er and see it everyday. Granted, my parents are Baby Boomers, but there's so much evidence that they have completely FCKED you it's silly. I wish I were able to post a link (I'm a n00b), but have tons of evidence to show you in that statement. You never had a chance.

That guy was as evil as it gets. Played both sides of the political spectrum too. No wonder he's dead.

Yeah, it's chopped up.

I've worked in automotive for the past decade and agree with this assessment. You'd have to really break down what you mean by "mainstream." To me it's chopped up in so many branding pieces it's not even funny. OEMs are all going to do their own thing, with their own design engineers and their PERCEPTION of what people want. The smart ones test this stuff, the others guess or just style against functionality and money saving tactics.

Sigur Ros - Glósóli but I am unable to post shit, I'm a n00b

Christ, I just broke my left foot middle toe and I'm crying like a baby. I can only imagine what it was like breaking your leg in the middle of nowhere! :-)

Hey, anything for funding, right???

I like the effort, plus it beautifies the land. I'm halfway to becoming a dual citizen of US and Ireland. Happy about that...

That's a VERY LOW sum and does it truly cover all of the pain and suffering? Hope that those that have suffered get their payout. I mean, there has to have been more than 572 opioid abuse cases. Let's say there were only 572 (but you know that number if probably 100 times that amount in OK). $1M each... yeah that's a super low amount, IMO.

Yes, one would hope, but there's been a bad precedent set for this kind of stuff. We shouldn't be surprised if the governing group (state of OK, in a recent case) gouges some of the payout for themselves. SMF!