a thoughtful web.
commentspostsbadges
Good ideas and conversation. No ads, no tracking.   Login or Take a Tour!
search: WeWork
relevancy  ·  time
comment on: "Yeah it's still water:" a tale of Texas Instruments · link
by: kleinbl00 · 1013 days ago


Adam Neumann ran up five.hundred.million.dollars in debt ahead of WeWork's IPO. As part of making him go away so they could douse the flames and cut the carcass up for dogfood, Softbank waved their hands and made that debt go away. They're also gonna let him sell the shares he has in the company for $200m.

Adam Neumann is going to make seven.hundred.million.dollars for losing more money as a landlord than anyone in the history of rent.

Elizabeth Holmes batted her eyes at her next door neighbor and convinced him she could revolutionize blood chemistry after one semester of Chem 101 at Stanford. Investors piled eight.hundred.million dollars into it not because they understood how it worked, but because they knew someone who said it would work and that they could sell it for more to someone else.

Travis Kalanick convinced people to give him twenty.five.billion dollars on the idea that you don't have to follow livery laws.

Now you know where that money comes from.

Halfway to WeWork's Gulfstream G650, tho.

comment on: Bridgewater has just bet a billion and a half on a March recession. · link
by: veen · 989 days ago


It feels to like we’ve been talking about the impending crisis for the better part of the past two, three years. I know markets stay irrational for much longer than seems plausible, but at the same time I’m also starting to think that there’s been some interesting pushbacks on the parts of our current economic system that seem to be the most risky. WeWorks’ dropped value and the Feds money pump come to mind.

Is it even possible that the adults in the room have learned from the previous crisis and we can stave it off pretty well, or do you think there’s something fundamentally broken that prevents us from entering some sort of post crisis era like we were promised in the nineties and zeroes?

I'm a huge believer in coworking spaces, have actively used and promoted them, and have been a member of - and know people who currently are members at - WeWork.

I had never heard of SPE's, though. That some crafty financial skullduggery, right there.

And a wicked-rickety tower to stand $20bn of valuation on top of!

I still like the Office Nomads model: Own the building. Full disclosure: I was a tenant for several years, and am personal friends with the owners.


This time, I believe the collapse will go deeper and happen faster because Dodd-Frank has decimated market makers’ ability to cushion it. Likewise, the Fed will be reluctant to bail out ridiculously priced bonds like WeWork and its many covenant-lite, unsecured brethren

We’re seeing classic end-of-cycle behavior: throw caution to the wind and plunge capital into the market’s riskiest corners. This artificially-induced buying is propping up companies that would otherwise succumb to the fundamental forces arrayed against them.

His parallel of corporate debt being the new mortgage debt is absolutely fascinating. 'Huge if true'. There have been discussions on here before about similar hypotheses, but I feel like this summarizes a bunch of those ideas together. So if I understand it correctly, regular stocks and bonds are no longer yielding enough to keep all our yield-based financial products afloat (e.g. pensions), which has pushed investors into riskier and riskier territory, as that final graph shows and as startup culture (and even crypto?) confirms. If the only things that have a return on investments are Greater Fool Theory-esque things that have little to no real value, it is increasingly likely that we're talking about a row of dominoes easily toppled by one and that

I also think there is an interaction effect between corporate debts/spurious VCs, student loan debt/spurious degrees and the erosion of the middle class that is entirely sidelined here. But I don't know enough about any one of those to connect those dots.

comment on: Everything Screams Inflation · link
by: kleinbl00 · 458 days ago

The Nixon Shock has been widely considered to be a political success, but an economic mixed bag in bringing on the stagflation of the 1970s and leading to the instability of floating currencies. The dollar plunged by a third during the 1970s.

And the Volcker Shock

I dunno what the hell happens. Maybe nothing maybe lots. As Galbraith said, and Rumsfeld butchered, "there are two kinds of forecasters: those who don't know, and those who don't know they don't know." I'll say this: DOGE doesn't go to 70 cents if /r/WSB and their ilk don't discover the grift when RobinHood halts trading in GME. WeWork doesn't have a $47b valuation in a world where a passbook savings account makes 4%. And for purposes of tariff avoidance and tax evasion, crypto matters. 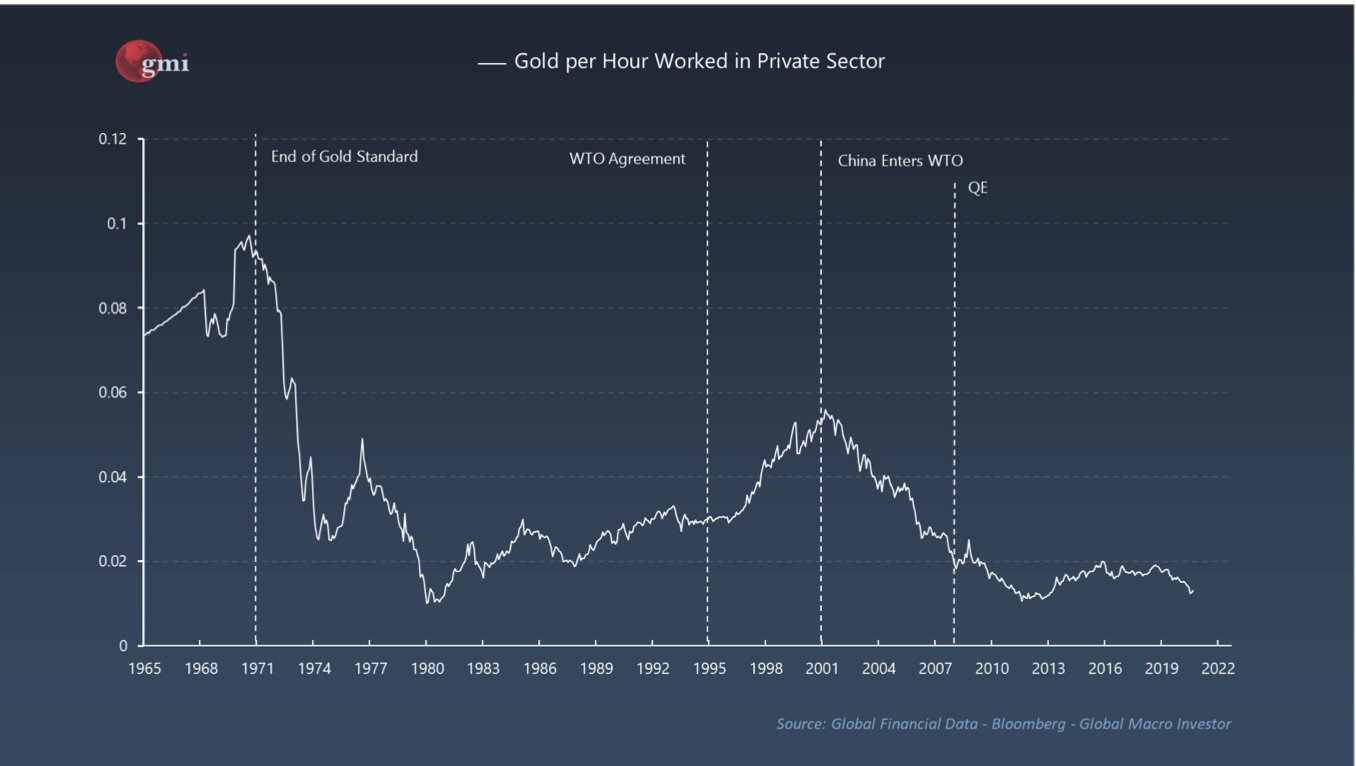 comment on: The Enablers: How Venture Capitalists are Deforming Capitalism · link
by: b_b · 622 days ago


This is a good read, but it doesn't go into too much detail about the generalizability of the WeWork debacle, which is the main thrust of the article. I found that lack of data disappointing.

comment on: New Seattle law requires third-party delivery apps to get restaurants’ consent to list their menus · link
by: kleinbl00 · 332 days ago

Postmates loses five dollars for every four it makes. Nonetheless, Uber bought it for two and a half billion dollars. Uber, meanwhile, is only "profitable" by juggling numbers in Uber Eats and Postmates.

It doesn't fucking matter, of course, because eight cents of every dime of stimulus that has gotten us through the pandemic has gone directly or indirectly into the stock market, which is a second-order popularity contest based on options flows.

At least the Soviets had a planned economy that didn't work. We've got a kleptocracy run by shitty equations and high frequency trading.

On the plus side? The only way Postmates and Uber work is by being extraordinarily shitty to their employees so they can convince disinterested Robinhooders and equity funds that they're "cutting costs" appropriately. Uber is throwing a quarter billion dollars at getting people to drive for them again and it isn't working because if it sucks driving jackasses around for less than $10, it only sucks a little less for more than $10. Eventually everyone has a "never fucking again" moment, like the PostMates guy behind me in line to get back into the mall. Who was there to pick up a video game preorder from GameStop. And no, the guy he was picking it up for wasn't interested in the poor driver picking it up from any other goddamn GameStop because this one had the magic stickers in it or some shit. He watched me enviously after I decided ten minutes was enough, and chose to walk all the way around the mall to get back to my car. That guy? That guy was making $3 to be told by some stay-at-home asshole that his time wasn't worth magic stickers.

So eventually the equation shifts and some stuffed shirt decides Uber isn't ever actually going to make money in a real way but before that we'll have AOL-Time Warner all fucking over again, WeWork valued at $47b and greater fool theory will keep the rich assholes rich and the rest of us waiting in line to pick up a copy of Cyberpunk 2077 for $3 until we all decide we're fucking done with it.

There's currently five jobs for every four unemployed people in the United States, according to the Commerce Dept. And most of them are bullshit that we all have stories about. I truly believe that the Pandemic taught most people that their job sucks and they aren't paid enough not because of economics or rationality but because the system is designed to fuck them over largely out of pure cruelty.

Six outta ten college students are women this year. It'll be two outta three in a few years. Now - it's pretty obvious that college is bullshit for boys and girls in this day and age. But why are the girls still cool with it? I reckon it's because a girl living at home figuring her shit out faces less stigma than a boy living at home figuring shit out but the center ain't holding on that one. Shit's gonna change.

What precedent will this set? I don't think any. But I think it's another grain on the sandpile and the avalanche is coming.

Last Lyft I took in LA cost as much as the last taxi I took in LA. Take out the bullshit and it turns out we knew the market rate all along. Eventually all the Uber and Postmates in the world are gonna be too expensive to bother with. The question is how much they'll destroy first.

I'm in a mood today


That's a great thread. I imagine many would be Silicon Valley entrepreneur types see WeWork not as a cautionary tale but rather Neuman personally as a success story.

comment on: Why Are Young People Pretending to Love Work? · link
by: Merlin · 1287 days ago


Good read. Interesting and little scary. I had to admit I chuckled a good bit about Adam Neumann's company WeWork transitioning to WeCompany in order to start up real-estate and education missions. It automatically brought to mind the book We by Yevgeny Zamyatin. Maybe he wasn't so wrong in his prediction....