a thoughtful web.
commentspostsbadges
Good ideas and conversation. No ads, no tracking.   Login or Take a Tour!
comment by psychoticmilkman
psychoticmilkman  ·  4 days ago  ·  link  ·    ·  parent  ·  post: Tips for Better Burgers

Was a cheesemonger for a short time. One of my favorite things to do was to suggest and give out samples of Gruyère, but make the customer try to pronounce it first.

Most people don't know it, but they probably need a little more Gruyère in their life.

This is a PSA now: everyone should put Gruyère on their burger, or Comté, or a smokey blue.

You get a small pass if you're buying American cheese to put in a homemade mac-and-cheese, but you should put some aged cheddar in there as well.

I’ll unabashedly admit to liking American cheese, but it’s not my favorite Mac-and-cheese cheese. That honor belongs to fontina. Fontina melts like cheddar, but has some funk to it—really lets you know you’re eating cheese in your Mac and not processed cheese product.

Fontana is a beautiful choice and always a good recommendation for melty things. Tuscan herb crusted Fontina will up your grilled cheese sandwich game also.

You are absolutely correct. Everyone needs more gruyere in their life. Around here we wolf Iberico because it's delicious on asian pear. Yet Kroger has absolutely no idea how to prepare sliced Havarti and if Boar's Head doesn't sell it, it's simply not available.

I actually have a less puritan take on American cheese than just about anyone around me. The wife won't tolerate it. My daughter was asking for brie by name at three or younger. Me? I find waaaaaaaay too many ways snobbery has been weaponized so I let it go and mourn what's been lost.

I never cared for American cheese when I was younger, but I dealt with it. Became a bit more vocal about the dislike once I realized just about everyone I knew had a nostalgia hard-on for Kraft Singles.

But then I started cutting, selling and sampling cheese for real.

I lucked out and worked in a department that had absurd amounts of money to spend on expensive cheeses. My manager (whom I loved) was the biggest coffee, cheese and wine snob I've ever met. We got a long great.

I'm not going to tell someone to their face that they suck for liking American cheese, but I will always suggest something else now. And I will counter if anyone tries to suggest Kraft Singles are the best choice for anything.

Here are some things I feel like sharing about when I cut meat and cheese that, for some reason, I am still weirdly passionate about, and feel the need to keep talking about:

Customers who ask for pairing suggestions and are open about trying new things are obviously the best and are likely to get more chill and specific help and likely more samples than most.

Our location had a regular customer who came in weekly to buy between 1-2 pounds of ultra thin sliced Iberico to feed to his puppy as snacks. He was definitely that asshole who was always flashing his money.

Pair your cheeses with fruit more often, most fruit has some cheeses that it can go well with. The fruits that pair with the most variety of cheese are probably: Apples, pears, grapes and figs.

Don't freeze your cheese. Just don't. Please... for me? even an aged low moisture cheese can form ice crystals in the freezer and ruin the taste and consistency. If you tell a cheesemonger you're going to go home and put the fresh mozzarella they just made into a freezer, you are responsible for the stroke they have.

If you go to a deli counter and ask for fresh thinly sliced American cheese in any amount over half a pound, you deserve the reserved spot the devil has waiting for you in Hell. That shit gums up the slicers so fast it's the most frustrating thing to cut, and if you want them thin, they will not be consistent.

White American cheese tastes the same as yellow and is sometimes cheaper, but no one cares because they need that dye in their life for some reason.

Boar's Head is not the best quality meat you can get...BUT it's popular because they are consistent with their products and have built up an impressive collaborative training and distribution service with grocery stores. Store management are their customers not you, and they treat them well to make as many exclusive deals as possible.

Gruyère is amazing, if you want to step it up even more, find some Kaltbach Gruyère, easily in the top 5 of my all-time favorites.

If you ask a cheesemonger, who is surrounded by expensive foreign cheeses, where the vegan cheese is, where the Velveeta is, where the string cheese is... they will hopefully tell you politely... but It's probably not at the artisan cheese stand and they're gonna roll their eyes at you when your back is turned.

Considering I don't like almonds, Marcona Almonds are worth the price because they are crazy delicious and pair well with a lot of cheeses.

That was a bit of a rant. But I guess I feel better now. Seems I'm a bit opinionated when it comes to cheese.

...I'm reeling from the idea of a puppy eating a pound of iberico a week. Poor thing must have shit marbles.

I would not change a word of your rant. Gimme the DL on cheese paper, though. There was an awesome hoighty toighty cheesemonger I went to once that insisted you had to wrap all cheese in cheese paper. "All cheese?" I asked, and he hedged a little with "All the cheese you're buying."

I'm not 100% sure but I hope the guy was exaggerating about the amount of ham that dog was eating. He was the definition of the word "chode", whatever you're picturing in your mind is correct. He had to be asked to not bring said puppy into the grocery store multiple times. That puppy was definitely being used to try and pick up women.

Hoighty Toighty Cheesemonger is correct. It's super traditional to wrap cheese in paper! If it was a small shop, it makes sense he wrapped in only paper. If he was the owner or had worked with cheese for a long time, he was probably a Certified Cheese Professional, gotta know a lot about cheese, but also, it's super snobby history : )

Everything I was taught about cheese; I was basically taught twice. Here we are in America in a grocery store where we can't have nice things (raw cheese) and we do things here this way because...blah blah blah, but the proper way it's done everywhere else is this way because France and or Germany are bigger cheese snobs than us. Basically, all the "best" cheese info comes from France and all the "best" tools and accessories come from Germany.

Cheese sweats, 'cause moisture (don't freeze your cheese!!). So wrapped in paper keeps a good enough barrier for most odors and your wanted blue molds to stay in, but let's some airflow exist so the moisture doesn't build up in one place and make the cheese go bad. It is also traditional to not cut the cheese until ordered. Most paper wrapped cheeses were cut and wrapped immediately after the customer ordered.

That being said. I've personally never wrapped cheese in paper. From what I understand it's going to take a couple weeks still for most cheese to start having ill effects from being wrapped in plastic. But in the short term, a plastic wrapped wedge will stay fresher than paper wrapped for a few days.

If someone was buying a large amount, I would advise them to take it all out of the plastic within a week, then wrap individually with wax paper and store in a closed container in the fridge (some air to allow the cheese to breathe, but not just open in the fridge where other weird odors can affect the cheese). storing a blue cheese next to a non-blue is also fine for short periods but if it's wrapped only in paper and next to a non-blue your blue mold can spread...not necessarily a bad thing...but not a good thing.

If I opened my own snobby cheese store. I would cut to order and wrap in paper. With the grocery store setup and us wanting to have a huge variety available, plastic was the way to go.

There is also a standard way to wrap different cuts of cheese. 99% of the cuts I wrapped were wedge shaped. If someone is doing it well, you can tell if it was wrapped right-handed or left-handed. I'm right-handed but I actually wrap left-handed style because my manager was left-handed, and before he could figure out the reverse to teach me, I was just copying him.

LOL the iberico you're talking about 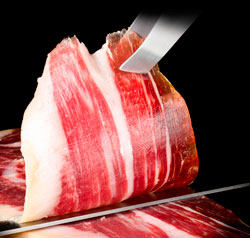 The iberico I'm talking about

That puppy fared better than I hoped.

I sincerely appreciate the disquisition on cheese paper. Cheese rarely lasts more than a week around here so I feel better now.

Haha! I love it. I was only a cheesenonger for like 8 months, so I'm still discovering new cheese. Now I need to track some down.

Trader Joe's usually has Iberico cheese. Of course, they usually have two kinds of Havarti and for the past two months have had neither.