Subpart B.1: A warmup

Did I tell everyone the weather looked miserable? Yes. Did anybody listen? No. Becuase we look at different forecasts, and mine are more right, more often, but more work to understand. That has been a theme this year. Anyyyyyyyyyyway. The allure of a relatively easy day, with many friends, and skiing a couple of thousand feet, was enough to convince me to go anyway.

At least it wasn't raining at the start. Go up both the snowfields, and a nice single pitch of 5.6 rock which I climbed in my ski touring boots (that was a first)! And then the rain and snow and wind came in and it was cold and the skiing was fun and then I just got rained on the entire walk back to the car. The end. 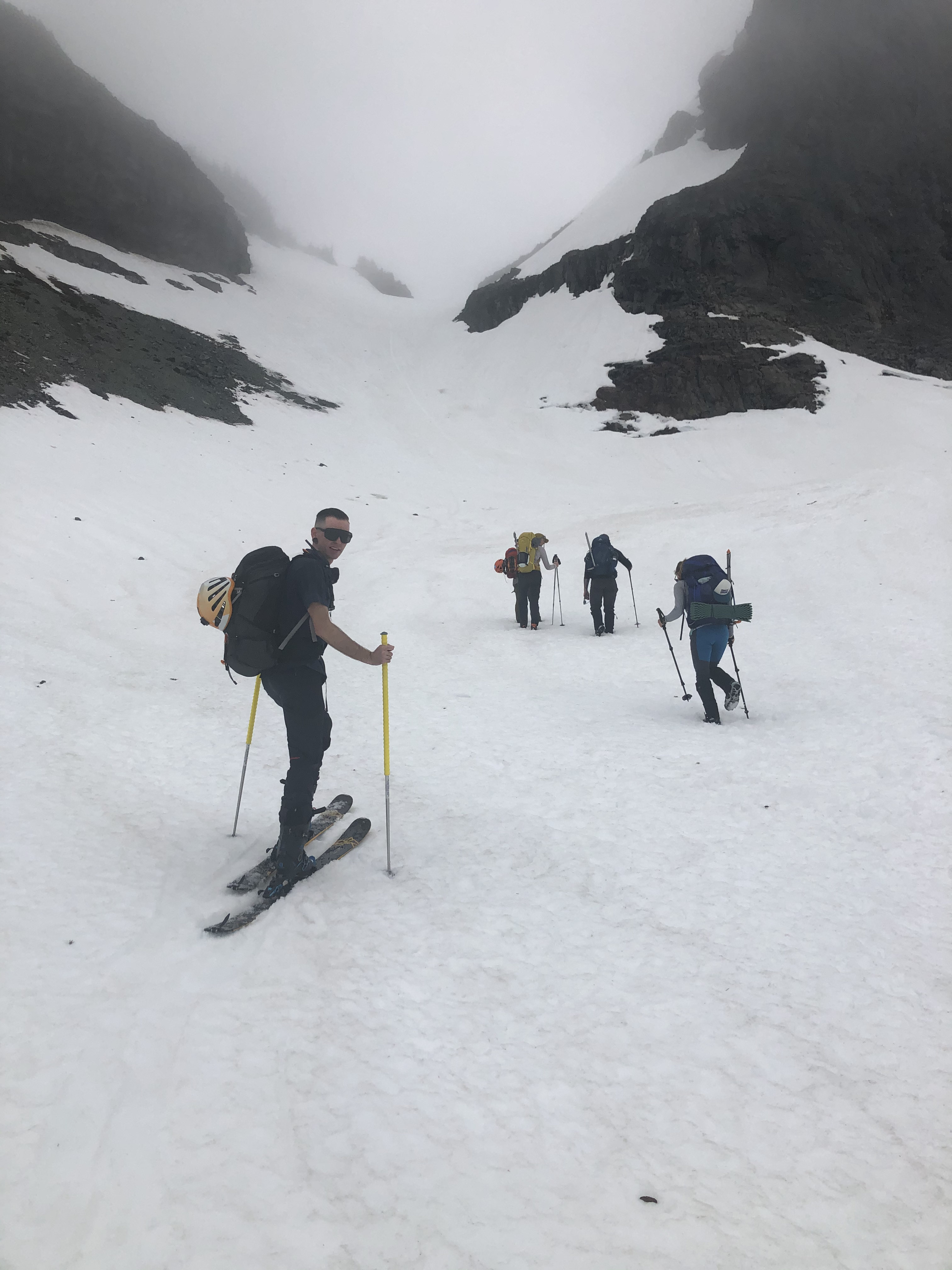 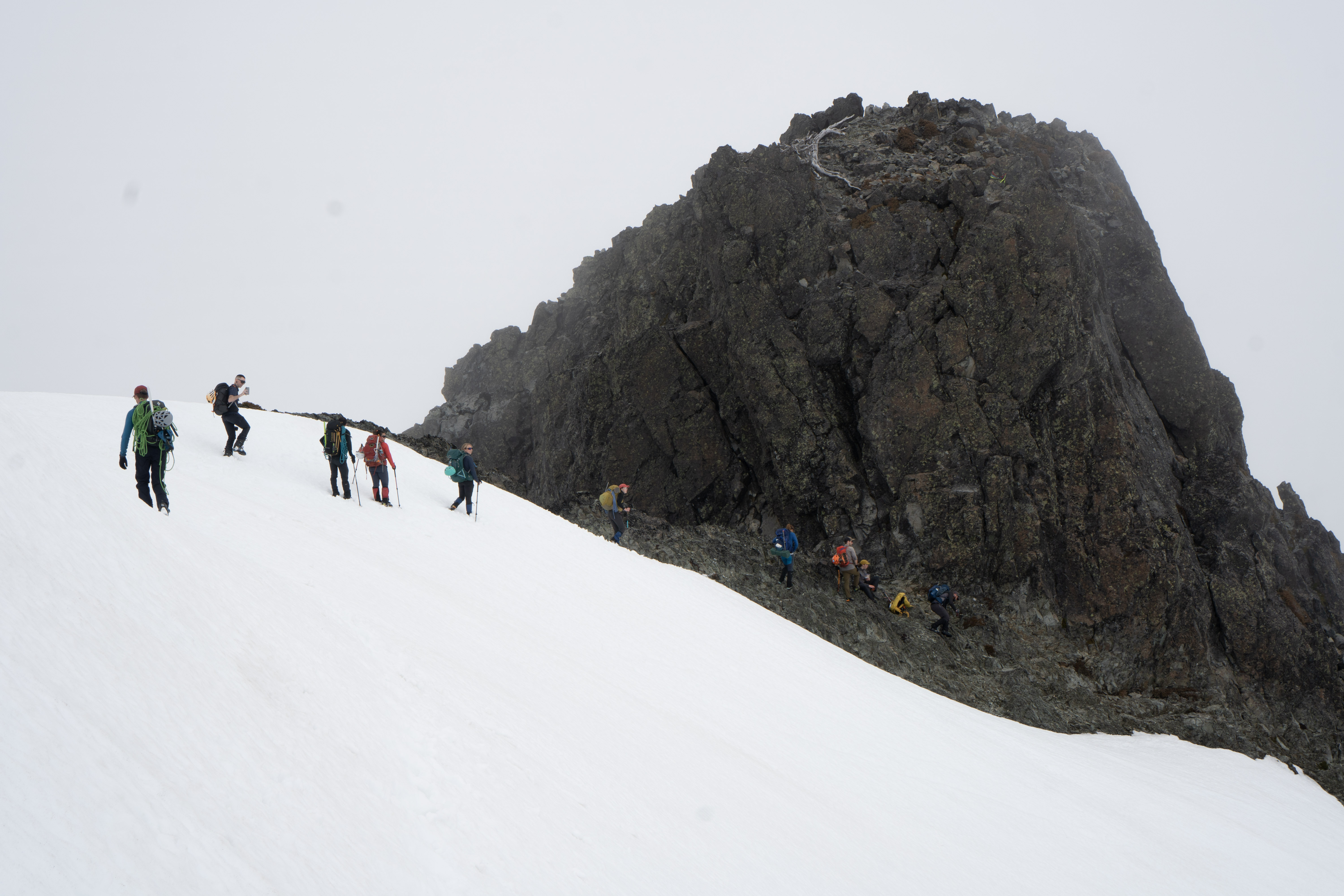 hey look it's me 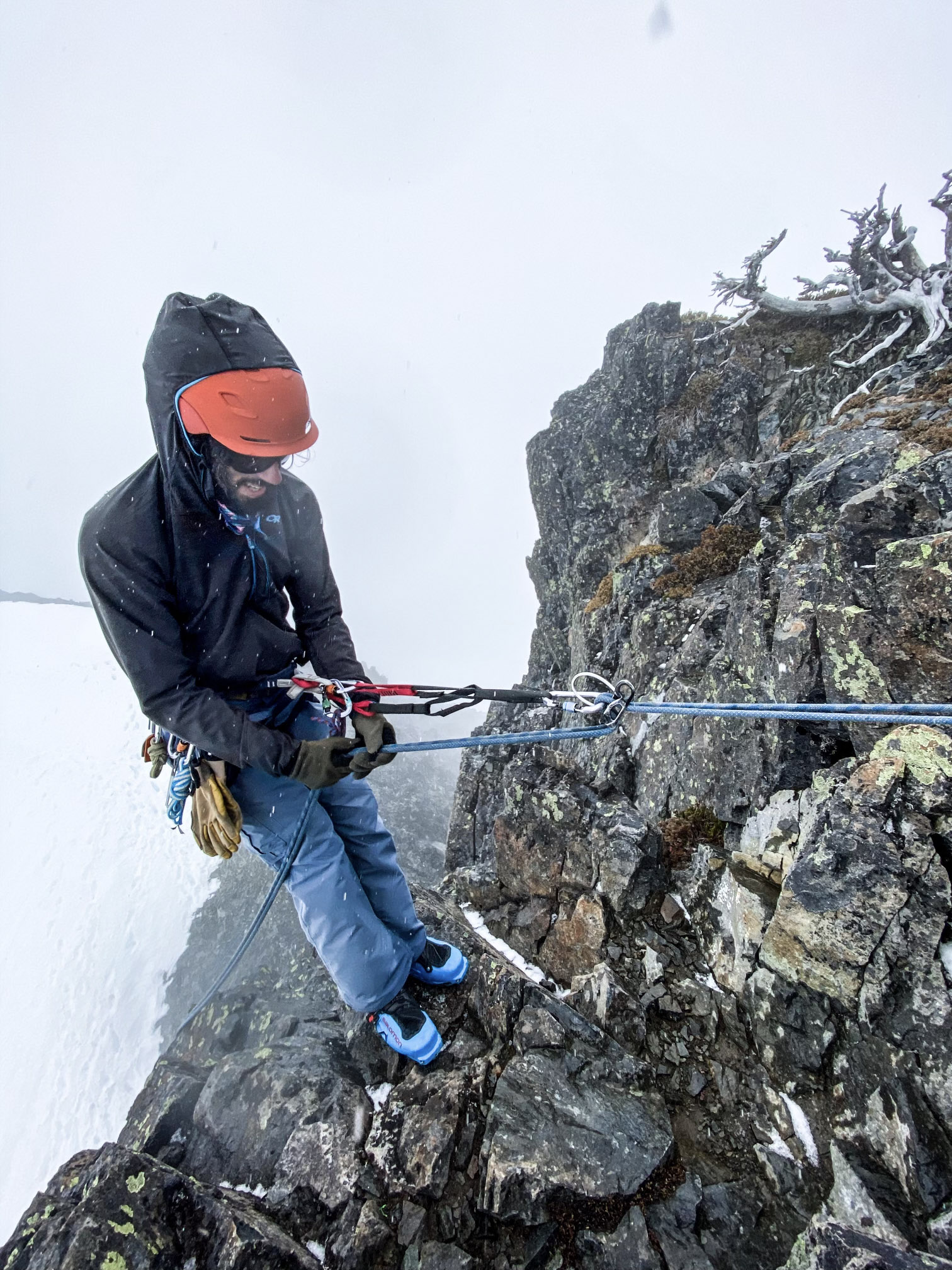 Subpart B.2: Attempt on Mount Rainier

Had some friends get frisky and want to climb Mount Rainier, I've summited a couple of times now and my buddy had summited before as well, and then 4 other people who had not climbed the mountain. Weather looked amazing, sunny, low avalanche danger, but not a lot of successful climbs yet on the season. We knew we'd be doing a lot of routefinding and putting in parts of the route above about 12,500ft elevation, and that a summit would be a 50 50 toss-up on this one. Went for it anyway. Did it work? Almost...

Look at all this shit. Into the pack! 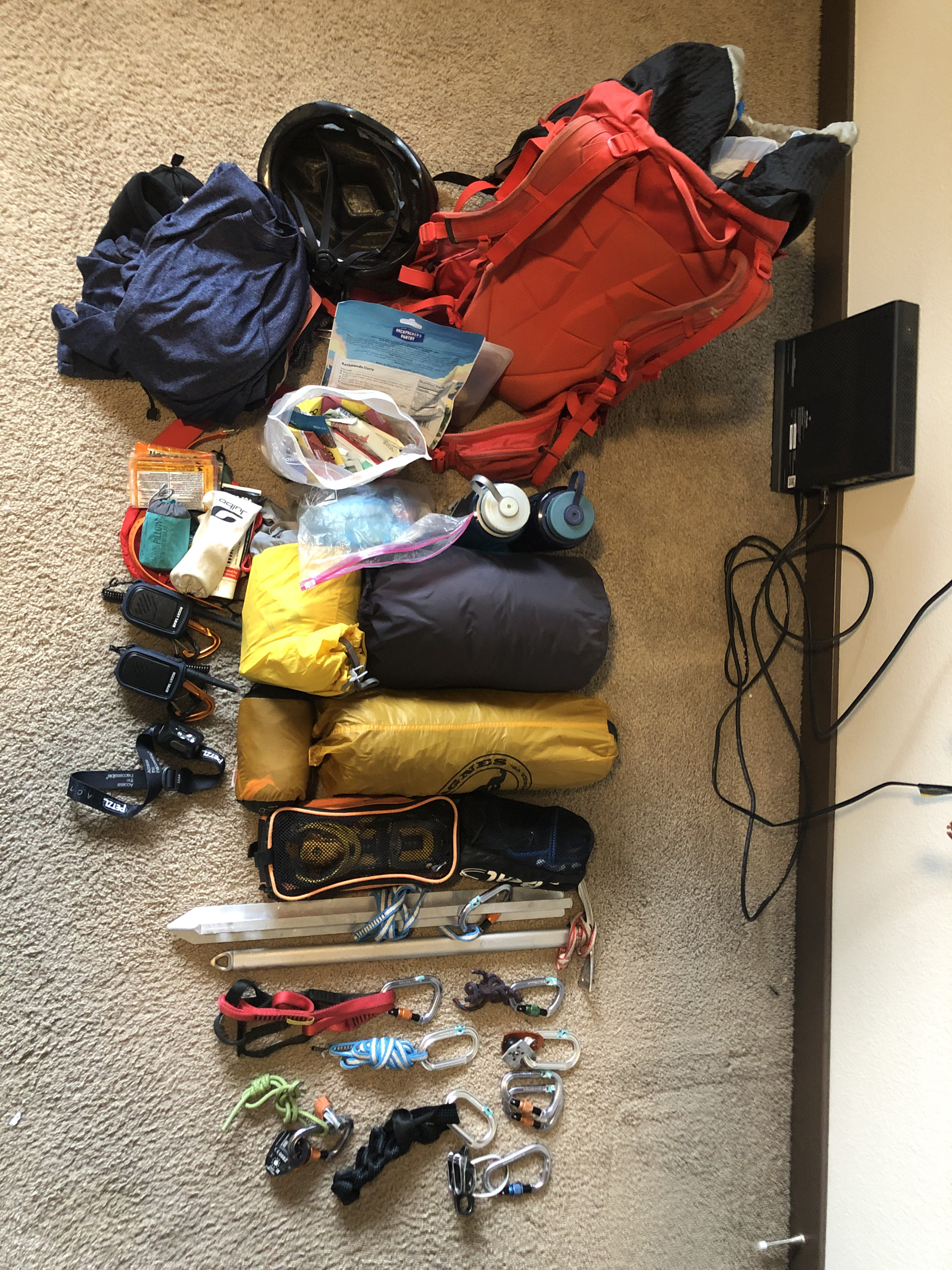 Eerily similar to the prior weekend...it wasn't particularly hot, but we were in a cloud, and it was so humid for the first 3ish miles and 3ish thousand feet of elevation gain. 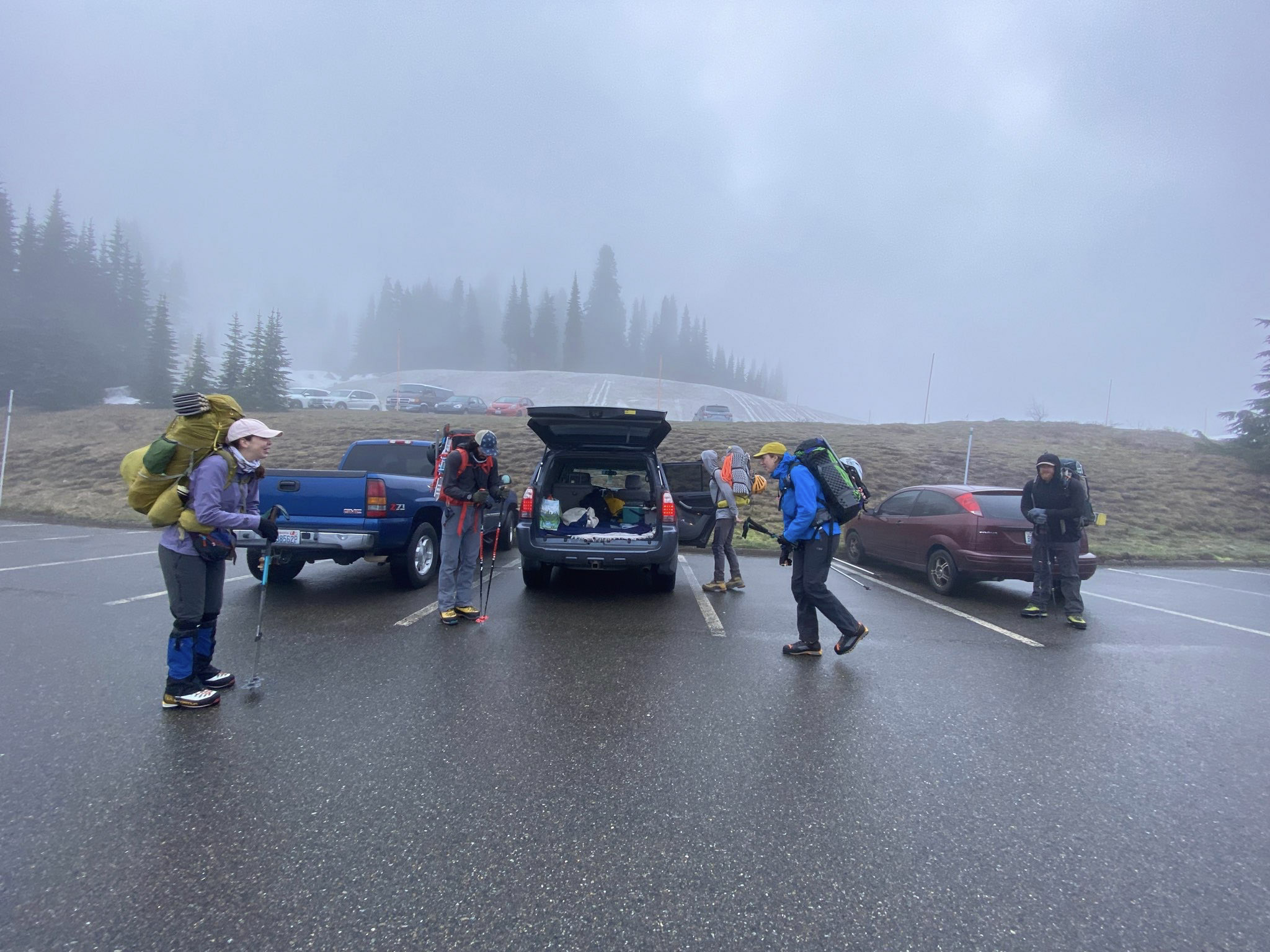 And then it was hot as shit as soon as we hiked above the cloud layer. Background: big mountain is Mount Adams, the little black knob is the peak we had climbed which I briefly talked about at the start of this post. 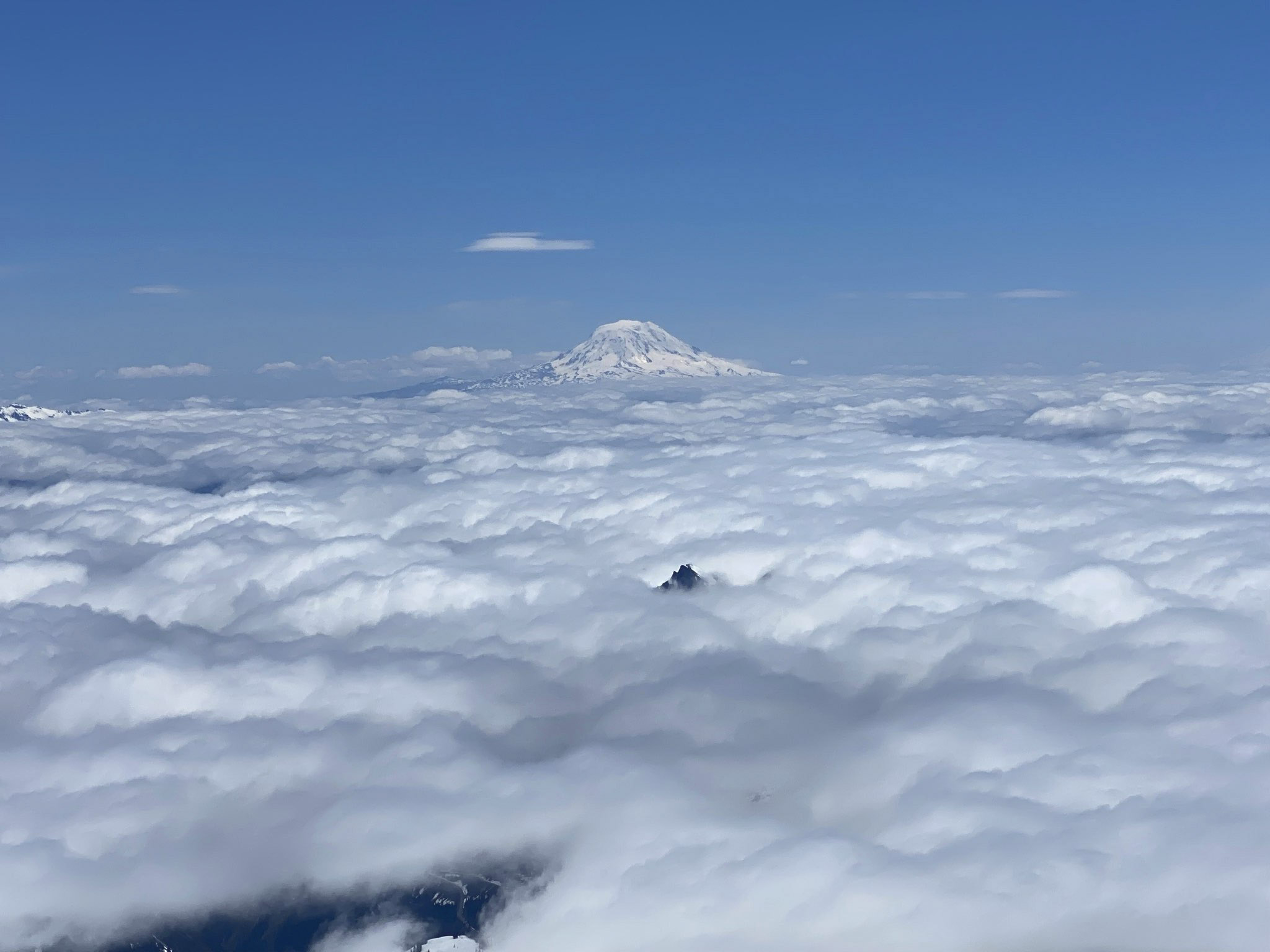 After spending a real long time at camp eating dinner, hanging out, and dealing with people coming and going, we decided on who would be on which rope team, and that we would get up at 11pm to start moving before midnight. I was wagering 6 hours to summit from camp, even though it's about 3 miles and 4k feet of gain. We had two people who had been on the summit before, 4 who had not. Amongst those 4, this was the first glacier climb for 2 of them. I ere on the long side for timing. I felt like shit, if I keep moving above 10k ft on Mount Rainier specifically, I'm good, but if I sit around for hours I get a massive, massive headache no matter what. And am then good again as soon as we move. Guess what happened??? I also barely slept because of some fuckers next to us who were up there hanging out celebrating a birthday and not up there to climb the fucking mountain. They were so loud, so obnoxious, I almost got out of my tent to yell at them. 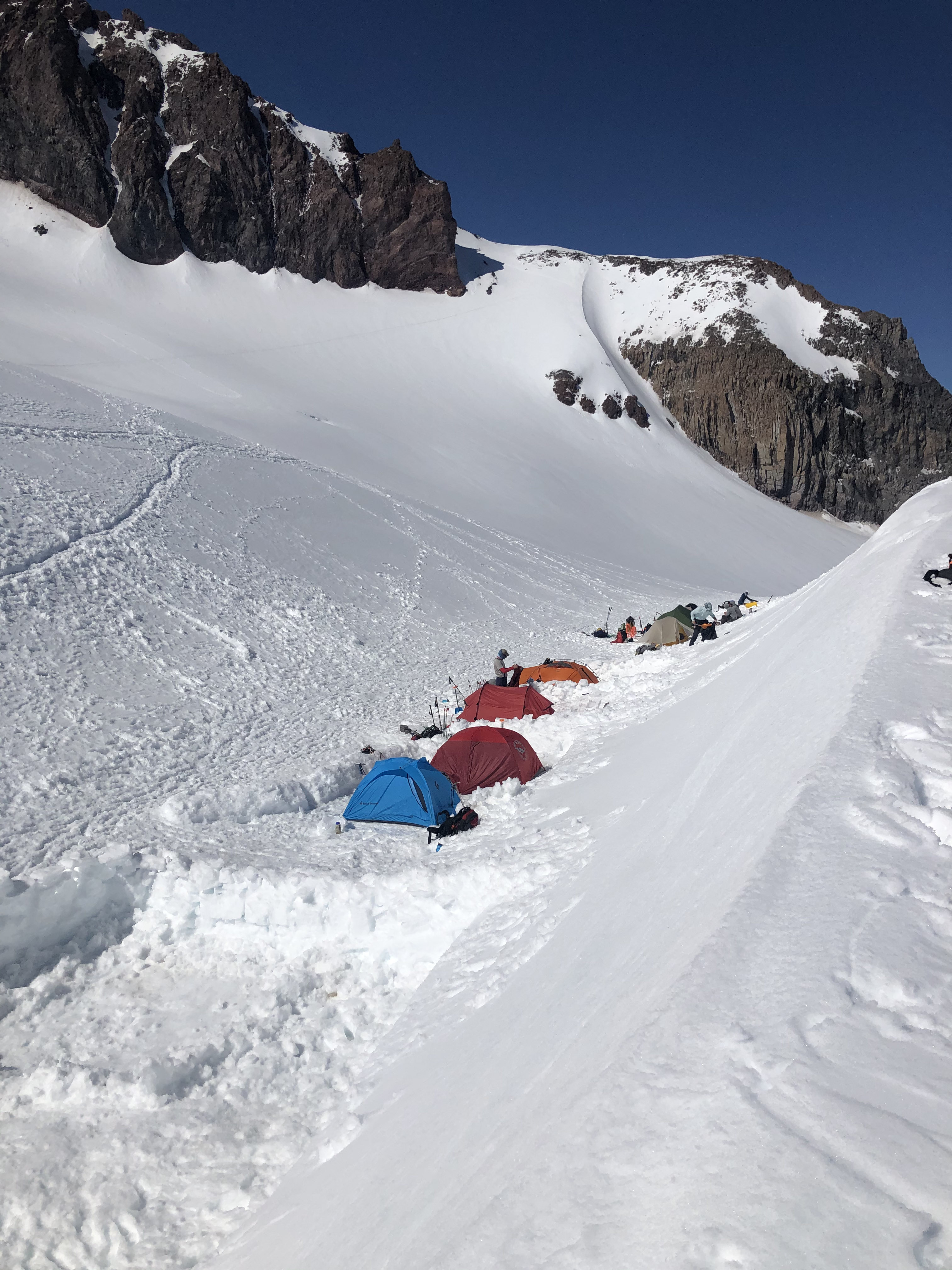 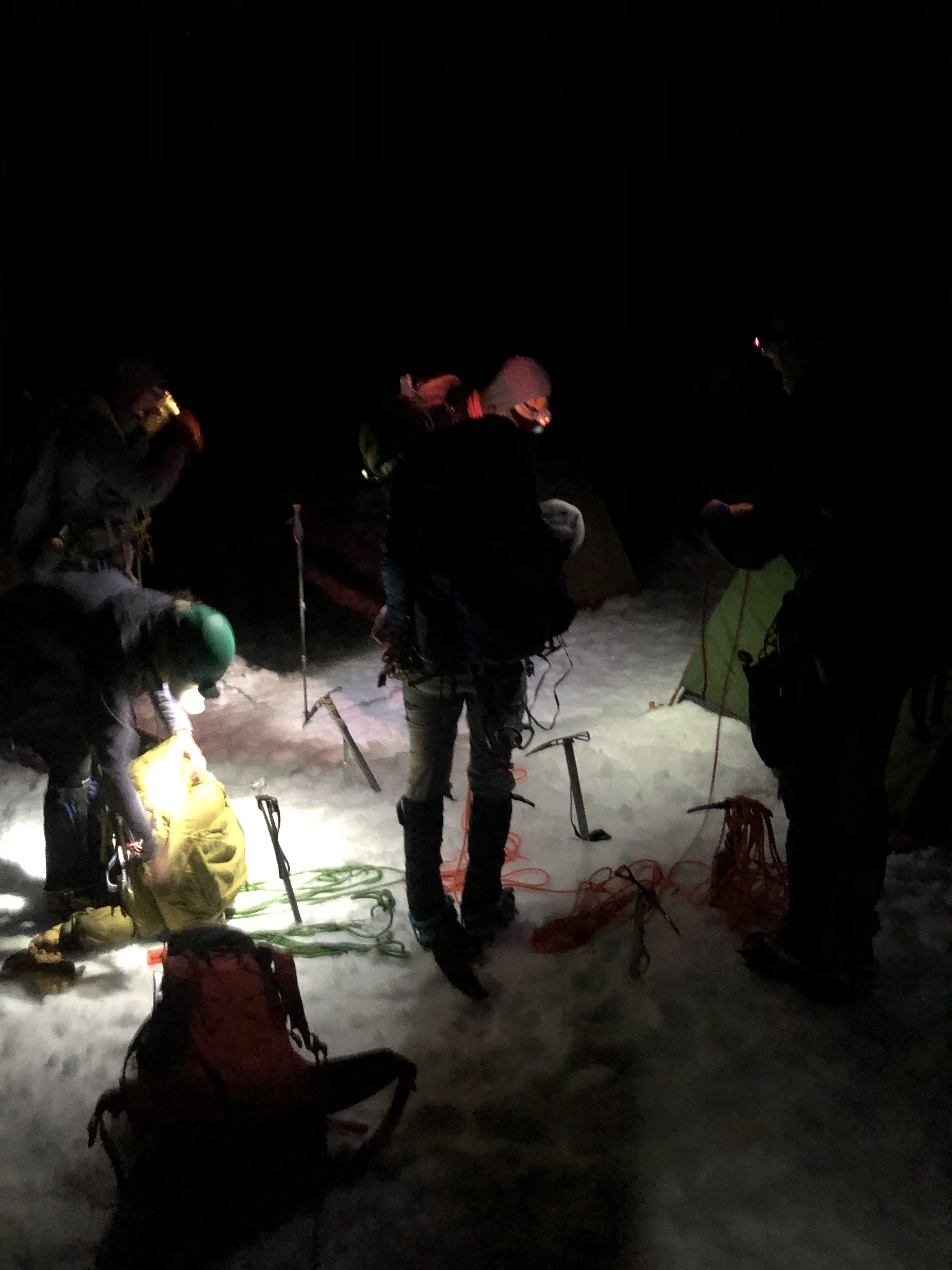 What happened was, we fucking booked it up to 12k ft and were on a 4 hour summit pace. Then, we no longer had a route. We managed to find our way up to 12.5k ft and then our pace dramatically slowed. One person started to get sick, couldn't keep food down, was dry heaving. The conditions deteriorated, things got windier, and we had a terrible mix of wind blown snow deposits over more and more ice. No pictures here outside of me looking absolutely worked and exhausted as I led us from 12.5k ft to about 13.3k ft. The two new people got very concerned over the ice, the one person was sick, and a 4th person was getting very cold. Super frustrating moment to turn back, I felt great, and we'd need to break through about 300 more vertical feet to easy terrain to the summit. But gotta do what is right for the team. On the way down we encountered 3 teams who turned back from a different route for a similar reason (ice), so that was a plus. Only one team summited that day. 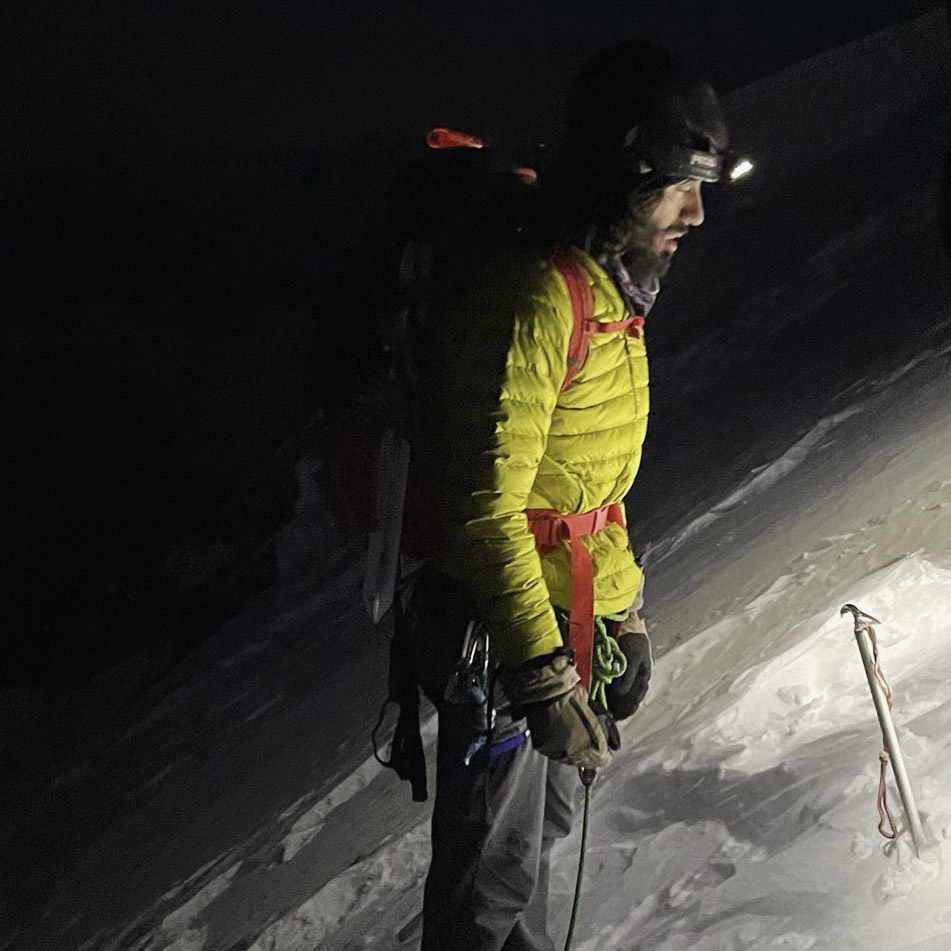 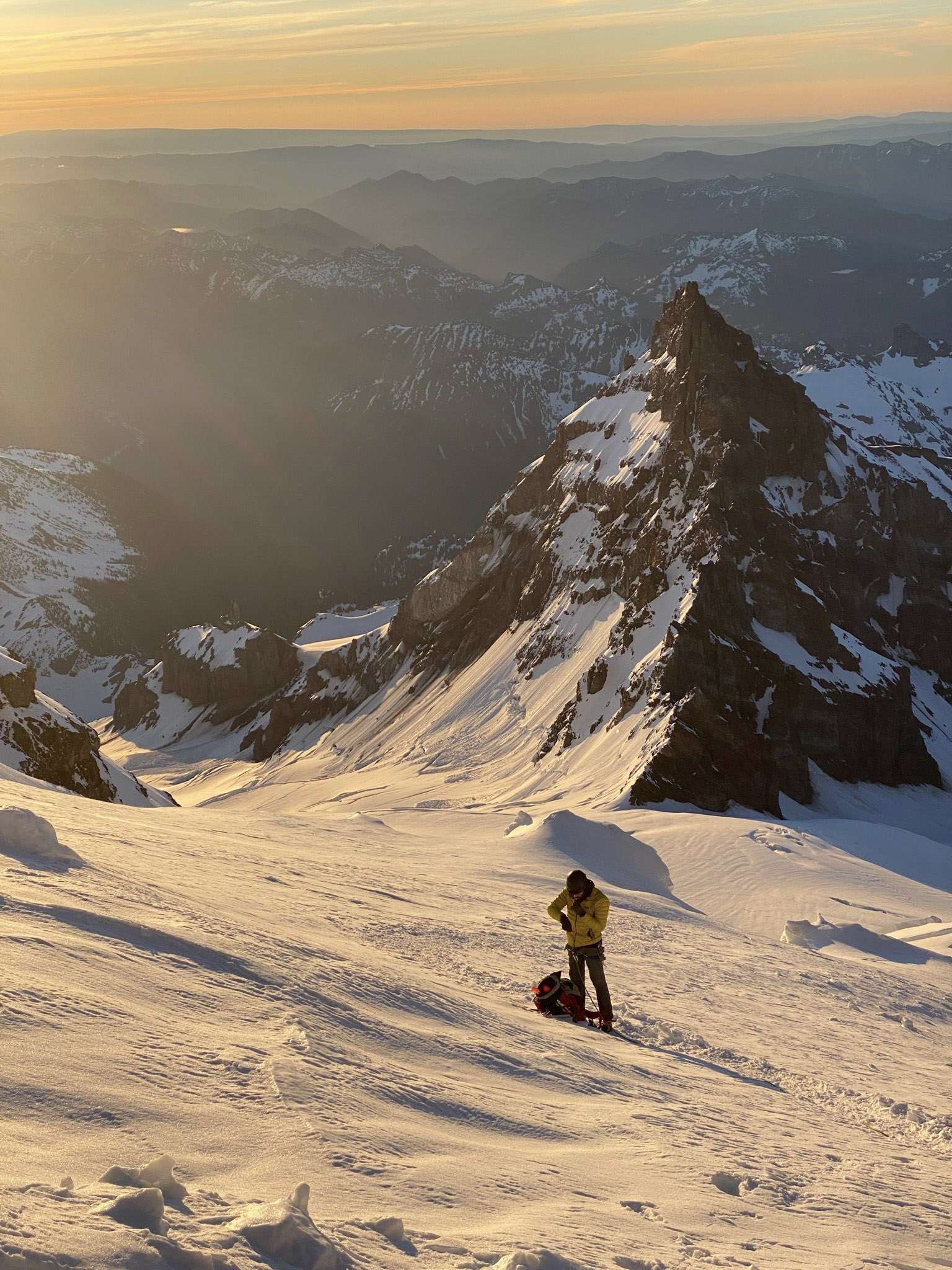 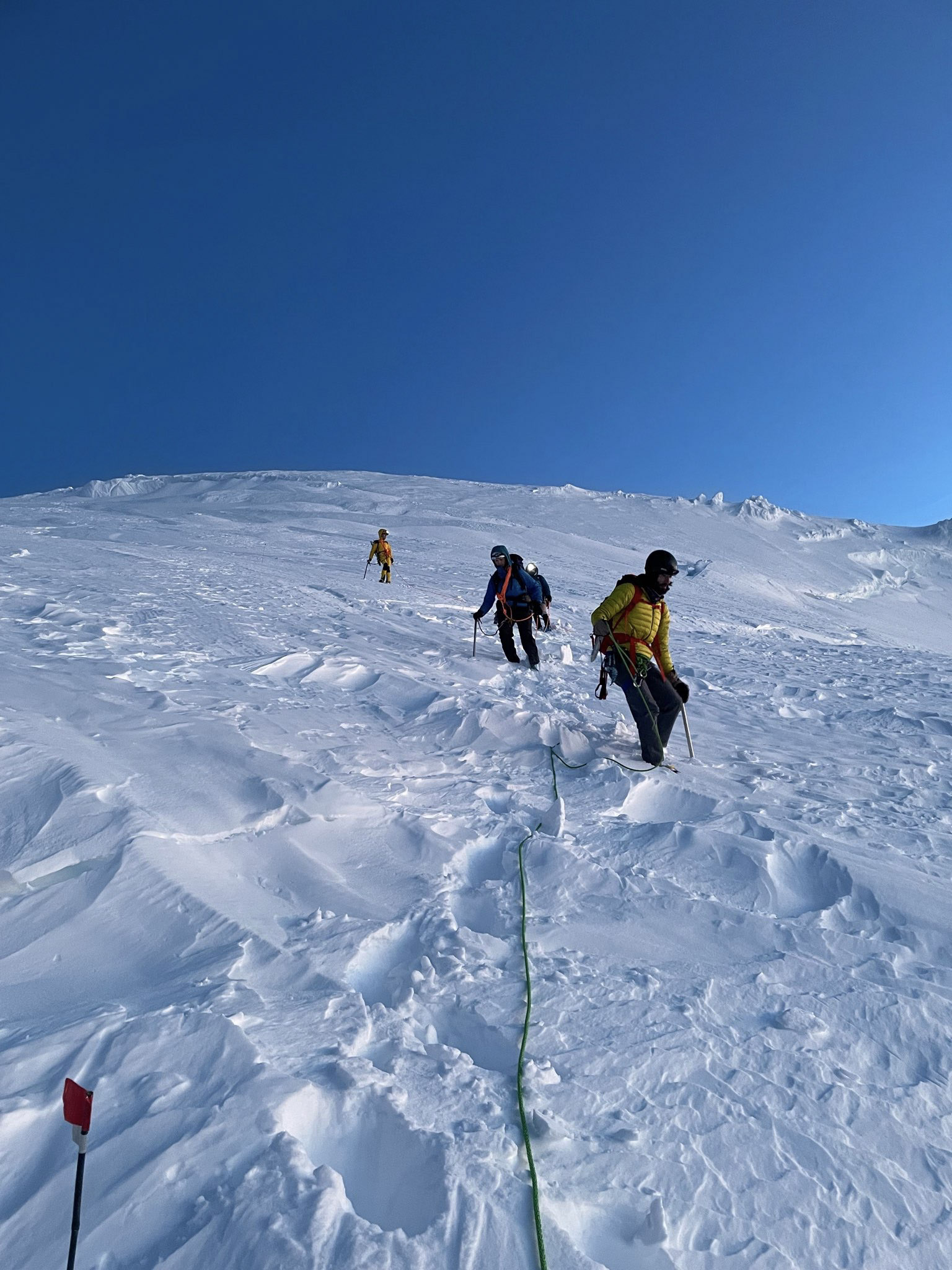