So I did some college physics. Statics'n'dynamics. Engineer stuff. It ain't hard. Let's start with a model, shall we? 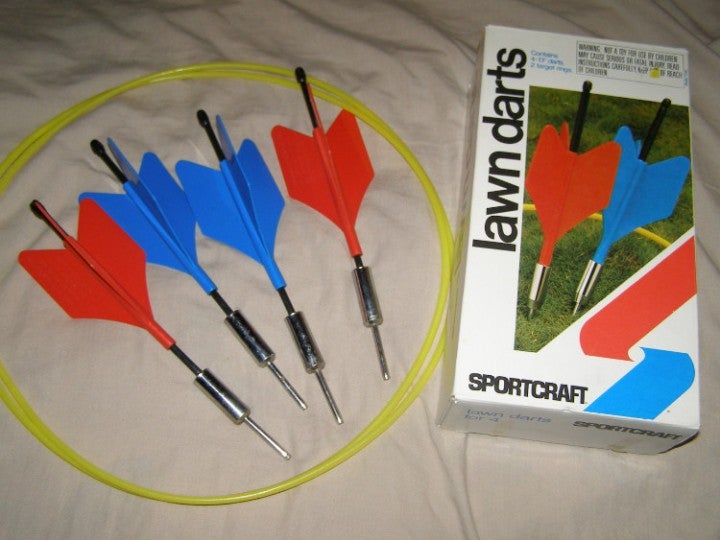 I'ma do that obnoxious engineering oversimplification thing where we model a horse as a sphere. I'm also going to start in Freedom Units and work backwards because ugh. So a lawn dart is about 12" long and weighs on the order of half of a pound. We're gonna simplify that into 30cm and one kilogram. We're also going to disregard the complexity of fins and non-uniform cross section and turn this thing into a highway flare, basically - let's model it as a cylinder 30cm long by 2cm in diameter.

We're going to do this because we're going to rig up a bola-thing out of jumprope and do some playground physics. Through sheer MacGyver awesomeness I'm going to craft a sling with a length of around 3 feet (1m) and I'm going to spin my lawn dart around my head at a rate of 3Hz. Once it's as fast as I can spin it (3Hz) I'm going to let go.

I'm then going to abuse the bejeesus out of online calculators because I'm lazy but will link them. In this case, I'm going to convert from angular velocity to linear velocity.

Hey that's pretty good. I'ma ask my buddy Newton (Vf = Vi plus at) how long it's gonna be in the sky, assuming it goes straight up, because I'm lazy and because it's a lawn dart and that's what they're for, duh. No drag because again, lazy.

59 feet straight up. Bitchin'! Definitely more than people can throw. We got a soup goin' baby! But now we gotta get Isaac to run some of the harder numbers. Like, energy. KE=1/2mv^2.

....shit. Why did the universe compel me to put a caveat on the KE? Musta been those two solid years of intro physics, followed by three solid years of engineering. Hmmm. KE = 1/2 Iomega^2. SHIT. Frickin' moments of inertia? I = L/omega. L = M x V x R. Uhhhm, M is mass is 1kg. V is angular velocity. R is radius around the centroid - hey we got all this shit!

I don't like those units. They're... foreboding. But now we can calculate the angular kinetic energy.

...that is more. more energy. Uhhhhhm somehow between spinning it around our arm and launching it straight up we bled off 95% of our energy. Which, my buddy Isaac reminds me, is not permitted by the universe.

So here's the basic problem: we were spinning that lawn dart around a fixed axis that happened to be "where I hold the jumprope." That lawn dart is not going to stop spinning just because we did. It's going to spin around its new system centroid. Good thing we already defined it as a road flare rather than a lawn dart 'cuz here's where stuff ceases to be fun (or starts, depending on one's perspective).

Now - I did this math? I did the shit out of this math 20-f'n years ago. So here's where I start fumbling. Because what we're worried about is conservation of angular momentum. ice skater pulls their arms in, they spin faster. In fact, if you look up "discus throwing momentum" you will get like long-ass papers that are mostly speculation, a little measurement and no real answers on the "conservation of angular momentum" problem. Because really, the momentum of the system is conserved, and we've presumed our rope (and me!) has no mass.

But let's fumble on and wait for Devac to poke holes in this 'cuz he's wicked smart.

Is it really, though? I have a degree in this shit and I'm pretty shaky on it. Turns out you physics nerds are better at this shit. Lo and behold you can't disregard half the system no matter how hard I, or Spinlaunch, wants to. But since we know even less about it than we do about the business end of the process, I'm not even going to try. I'm going to refer to that 146 Hz flat spin as the lawn dart's "suicidal urge" because while we can all agree that I'm not flippin' a lawn dart into a low thrum above my head, I think we can also agree that I'm not NOT putting a spin on it, and that when 95% of the energy is not pushing my lawn dart up, it's pushing something SOMEWHERE.

What we're looking at here, obviously, is KSP attempting to deal with corner-case physics it definitely wasn't designed for. I doubt it's got a 2-body problem algorithm in there. The launcher does not tear itself to shreds. It's got a vectoring motor capable of covering up nearly any crime. And even Kerbal is all "lol this thing is going through a full spin before we figure our shit out."

'Sokay. We've got a lawn dart, and it's doing more than going up. Now let's look at our friends Spinlaunch and their demo launcher. I'ma use your velocity 'cuz you calculated it and again, lazy. I'm also going to model their demo as a scuba tank because - you guessed it! - lazy. Let's go with an AL80 - 14.2kg, 184mm in diameter, 662mm long. we're going to work backwards from your linear velocity.

Oops, we already have a problem. We know it's designed to go 450 RPM. We also know that "SpinLaunch’s first suborbital flight utilized about 20% of the accelerator’s full power capacity for the launch" which... I mean they been pretty loosey-goosey with terms so I'll bet they mean it was running at 20% of the critter's speed.

= 4717 ft which, again, is aspirational but looks a lot more like what they actually got on video. And i mean, I can't throw a scuba tank most of a mile into the air so kudos. But I don't really think Spinlaunch can, either. Can they spin a scuba tank in a 15m circle at 108 RPM? mmmmmyeah, I'll bet they can. Can they put that 30m circle under something kind-of vacuum-ish? mmmyeah, I'll bet they can. But you can hear the whirring. It's under vacuum-lite at best.

But let's tie this poor sonofabitch back into our lawn dart.

Now. this is about where I argue, often ad nauseum, that the model is broken. 214kW/h is a lot of energy to put into a scuba tank. 15m is a hell of a lever arm. But there is no way in hell you're going to get a 9kHz flat spin out of a scuba tank. Ever. Under any natural, normal circumstances.

But you're also not going to get zero.

Conservation of angular momentum means the lion's share of energy you're pumping into the system stays with you. And it does so in an inconvenient form. Never mind any counterweight you may have, you're pouring the majority of your energy into you, not your launcher and you don't have a convenient way to deal with it. Worse than that you inherit it all at once when you fling your scuba tank into space.

You can't get rid of it easily, either. I mean, you could keep your scuba tank from rotating with a linkage. You would then turn it into a cocktail shaker, unfortunately, and shaking your cocktail at 107 cycles per second (never mind 450) is going to be bad for your cargo ("jerk"). But Isaac won't be cheated - the conversion between one kind of motion and another conserves momentum and there is much in this system.

I ran the numbers for Spinlaunch's actual system. This is left as an exercise for the student. What you need to know is it's at a 45m arm, it weighs 11,200 kg, it's 25 feet long and prolly 3-4 feet in diameter. It's "suicidal urge" is gobsmacking.

And again. Those aren't real numbers. But there AREN'T ANY REAL NUMBERS AROUND SPINLAUNCH. In order to get to that math you're spinning a pair of orcas around a 45m circle at 450 rpm and then flinging them into the air at Mach 6. I mean, c'mon. Presume you build this thing out of rainbows and hope, dumb-ass dynamics is still slapping you down. A half-gram USB-C connector under 10,000g weighs this: 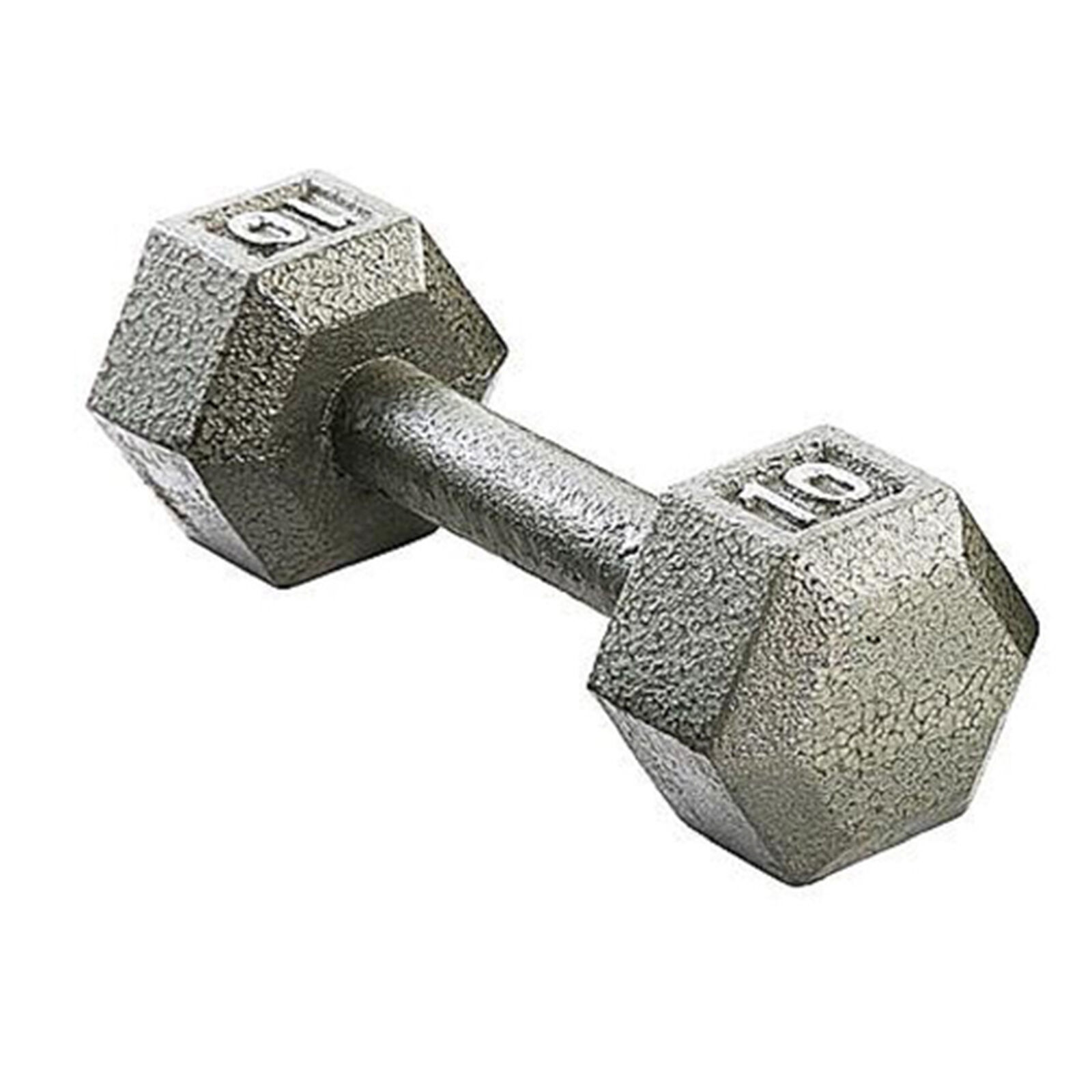 Design for that. Go ahead. Design for it in not one axis, not two axes, but the transition between those two axes. Also tell me you're going to aerodynamically stabilize a two-body problem with this thing. 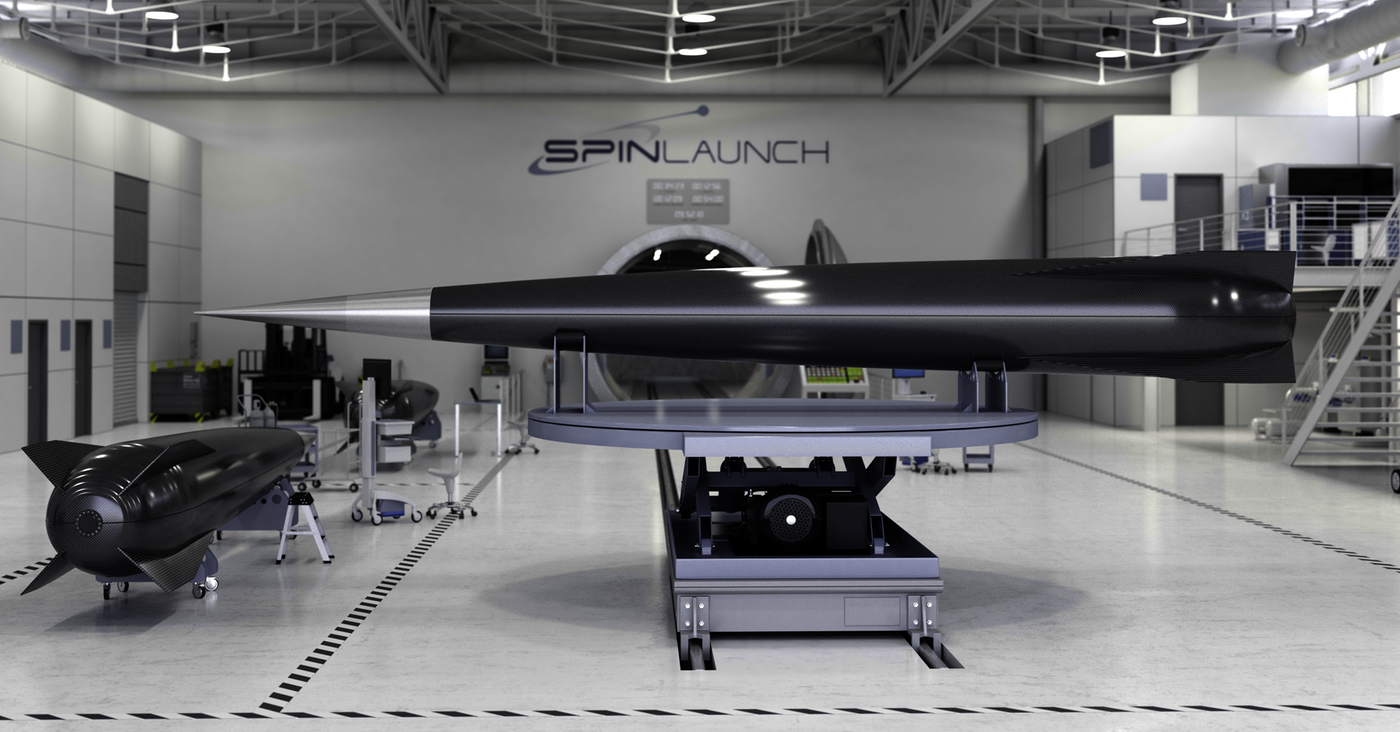 I don't know what kinda yaw is recoverable at transsonic speeds but I'll bet those are heroic calculations, too.

And it kinda feels like this is more math than has ever been done around Spinlaunch.

so holy shit y'all

- the accepted rotational velocity of a frisbee is like 2300 RPM

- the accepted rotational velocity of a discus is like 400 RPM

This does not portend well for the rest of the math.

Man, it's really too late/early for this, but I suspect the problems begin around here:

On a first glance, your model can be simplified to a rod spun a distance r around an axis, parallel axis theorem style, but I'm gonna take this one in pieces. Updates inbound.

My high school physics teacher used to carry a stamp around that said "momentum is a vector" and stamp it on students' papers. Seems that issue came up a lot.

He also had his sample of uranium-238 taken away by a certain government agency (I think Canadian Nuclear Safety Commission)?

I miss that class.

LOL you and your vectors. Speaking as a credentialed engineer, allow me to say that physicists insist on vectors, engineers just look for what makes the part break. Which is always a scalar. ;-)

But, in the end, isn't scalar just a trivial tensor?

Seriously, though: I know it can be annoying, but if my pedantism received anything over the last couple of months, was vindication.

(sometimes you work harder when goaded)