This report describes the President’s tax compliance initiatives that seek to close the “tax gap”—the difference between taxes owed to the government and actually paid. According to Treasury analysis, the tax gap totaled nearly $600 billion in 2019 and will rise to about $7 trillion over the course of the next decade if left unaddressed—roughly equal to 15% of taxes owed. These unpaid taxes come at a cost to American households and compliant taxpayers as policymakers choose rising deficits, lower spending on necessary priorities, or further tax increases to compensate for the lost revenue. The magnitude of the tax gap means that compliance initiatives have the potential to raise substantial revenue, but these reforms also improve tax progressivity and economic efficiency. While roughly 99% of taxes due on wages are paid to the Internal Revenue Service (IRS), compliance on less visible sources of income is estimated to be just 45%.1 The tax gap disproportionately benefits high earners who accrue more of their income from non-labor sources where misreporting is common. Further, the tax gap imposes distortions because of the resources some expend to avoid paying taxes and the incentives created to shift economic activity into certain areas where tax liabilities can be illegally evaded.

Piketty discussed tax evasion and black/gray markets in Capital in the 21st Century as between 30% and 50% of the white economy, and the greatest drag on government funding. Nobody talked about that, either.

I just gave up on blackbootz's discord server because the only conversation I could find there was how governments are powerless and bitcoin is going to propel us to a New World Order where we can live like Somali pirates or some shit. But the reality of the situation is that people generally like the things they get from governments, and generally judge their satisfaction with the expense they pay in terms of the expenses they see others pay.

The tax man cometh, mutherfuckers, and that is to nearly everyone's advantage. I don't know how many of you noticed, but the pandemic switched us from an earned income tax credit for children to direct payments and the fascists are so busy stopping the steal, lambasting Mr. Potato Head and losing their shit over critical race theory that they like, missed the socialism.

My shiny new 5-year-old company has a $40k/yr disincentive against buying health insurance for my employees. 'cuz that's what it's going to cost me to not punish them through misguided kindness.

We're turning left, guys. This whole MAGA thing? bit of a distraction, in my opinion. Massive stimulus has the United States as the only developed economy in the world not in recession 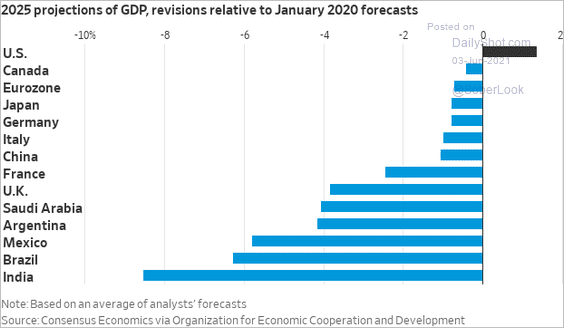 I know that's not the narrative anyone is voicing aloud. But when you dig into the data shit's gettin' socialist out there.

My sister ran a successful small business for many years, and managed to eke out a living of about $50k/year as the Owner, and employer of 7 people.

She was audited by the IRS TWICE - taking more than half a year each time - and what they found in the end? They owed her $5k for overpayment.

Meanwhile, during the same mid-2000's timeframe, Madoff, Trump, Alex Jones, and the whole passel of Republican oligarchs from John Boehner to Newt Gingrich down, enjoyed total immunity from the IRS and their shenanigans.

Biden's push for closer examination of tax filings - now, in the past, and in the future - is the one thing that can help pay for absolutely everything in the left's agenda... which will benefit literally the ENTIRE WORLD - not just the left - and put the money in the coffers to do good work in America. Not just live like scavengers off the infrastructure built by "the greatest generation". Psh.

My eyebrows were raised to grand new heights when I got an email the other day from the USDOT. They are making work of Biden’s Executive Order sixtys...13985 and are asking people for input. The goal is to, quote, “ pursue a comprehensive approach to advancing equity for all, including people of color and others who have been historically underserved, marginalized, and adversely affected by persistent poverty and inequality.”

If you’d given me the EO to read, I’d probably dismiss it as a bunch of feel good aspirations that are hard to make concrete. But the reality is that I got an email that basically said “every federal agency is given the task to start assessing equity and we could use help with that”, which is a fantastic concrete first step at addressing inequalities. It makes my euro-socialist soul ecstatic to hear them pursuing exactly what I think is sorely lacking in governmental policy - the proper consideration for structural, serious inequalities and the role that the government must have in preventing or reducing them.

But yeah - “equity” is a word only serious leftists care about, as far as I can tell. The makers of food deserts & forced car-dependance being told to take deep, serious look in the mirror about their contributions to inequality? You bet that’s a turn for the left.

I'm reminded that there were 91 million people in Russia in November 1917. 200,000 of them were Bolsheviks, up from 24,000 the previous February. Yet they overthrew a monarchy hundreds of years old and set out on a ruthless geopolitical experiment that lasted 74 years.

It kinda feels like the good ol' boy network was totally cored out by Trump and the new guy is basically going "Hey lefties we got money come talk us out of it." Any previous administrative handover would have included a lot of negotiation and revolving-door diplomacy between the mutual members of the good ol'boy network because a mandarin is a mandarin and ideologues rarely get to work more than four years at a time. But those guys are gone, man. Anyone with any professional aspirations took early retirement.