My time to work on this project has been sporadic, but it has been a lot of fun.

I replaced the servo head with an aluminum one, and used angled links to bring the arms towards perpendicular. I also shaved the top mount on the servo to make room for the body. 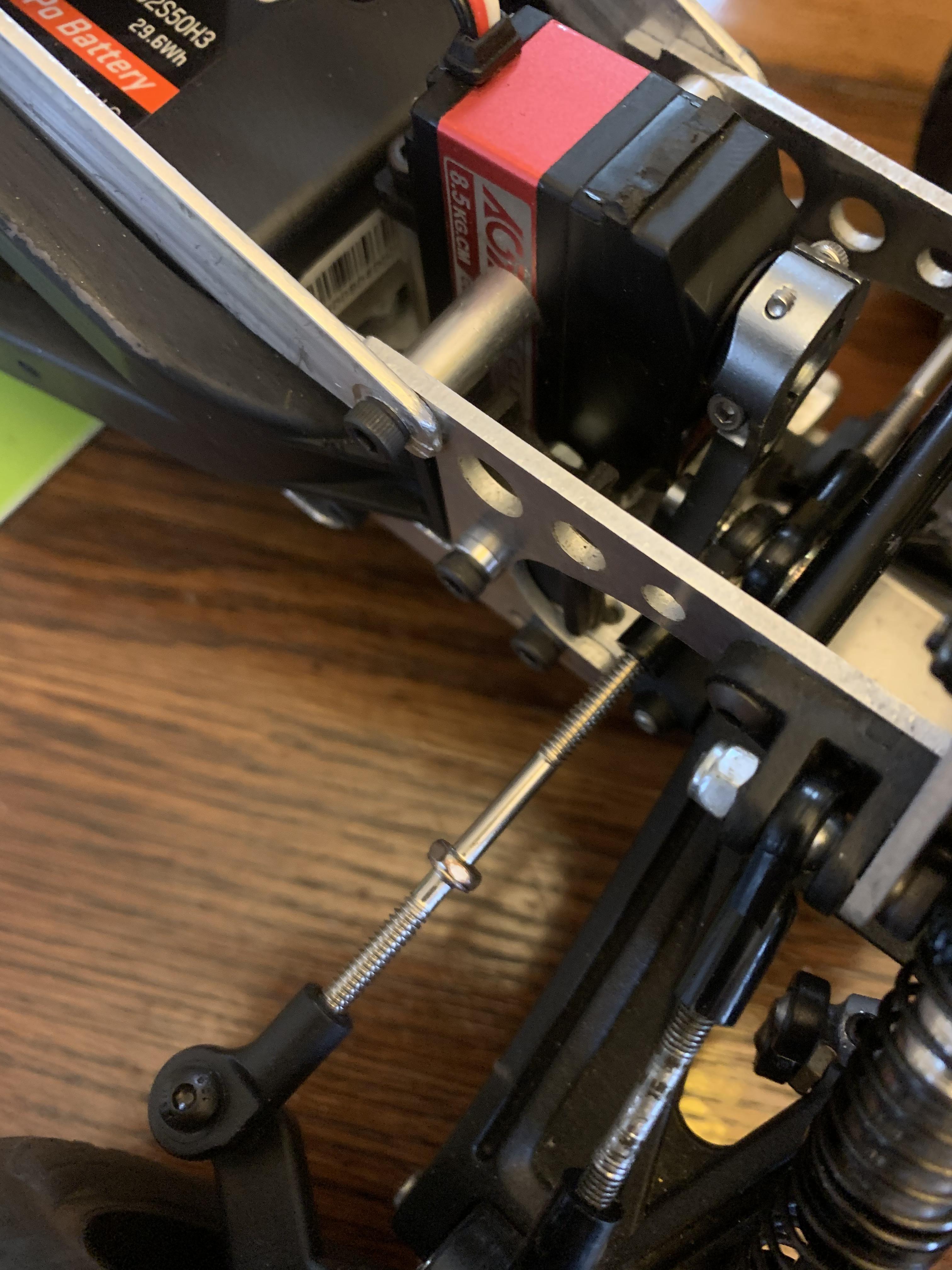 Next step was a roll cage. I decide that I wanted an actual roll cage rather then the lexan shell, and I went with one from the Kyosho Scorpion. The Scorpion's rollcage is more angled than I wanted, however, so using a vice and a heatgun, I brought the angle more vertical: 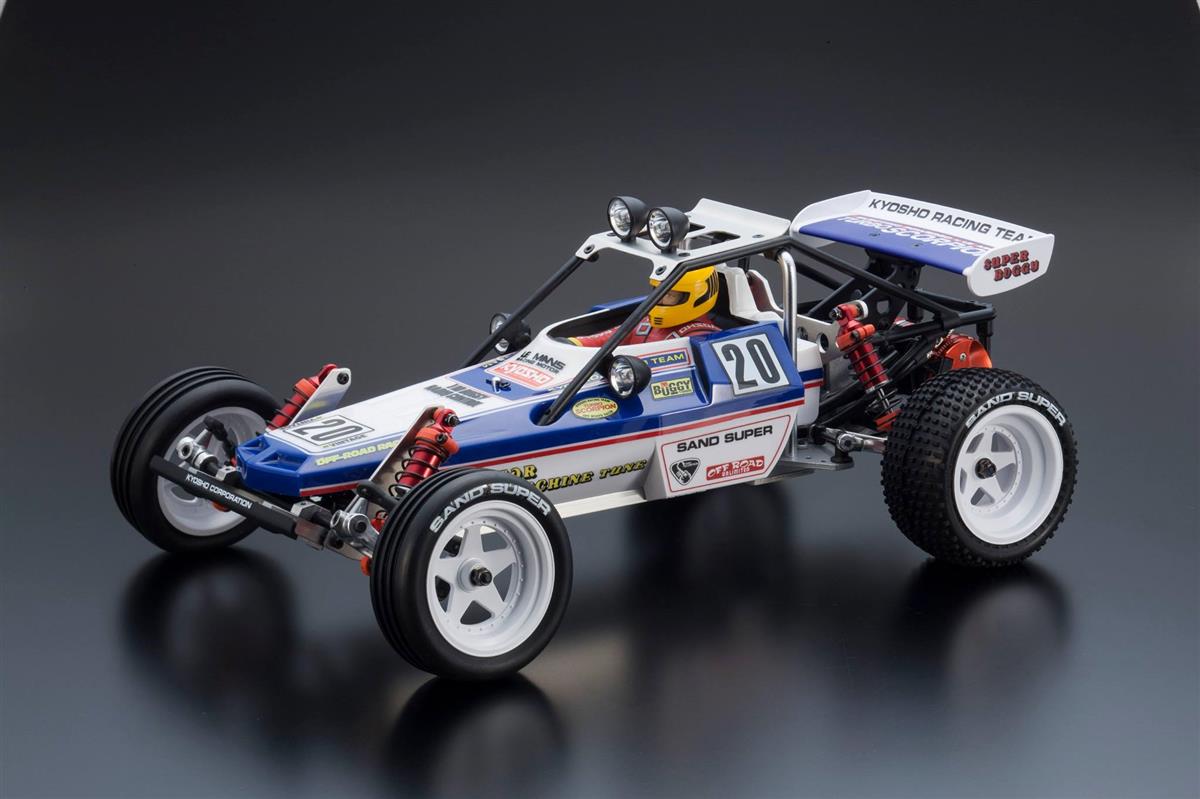 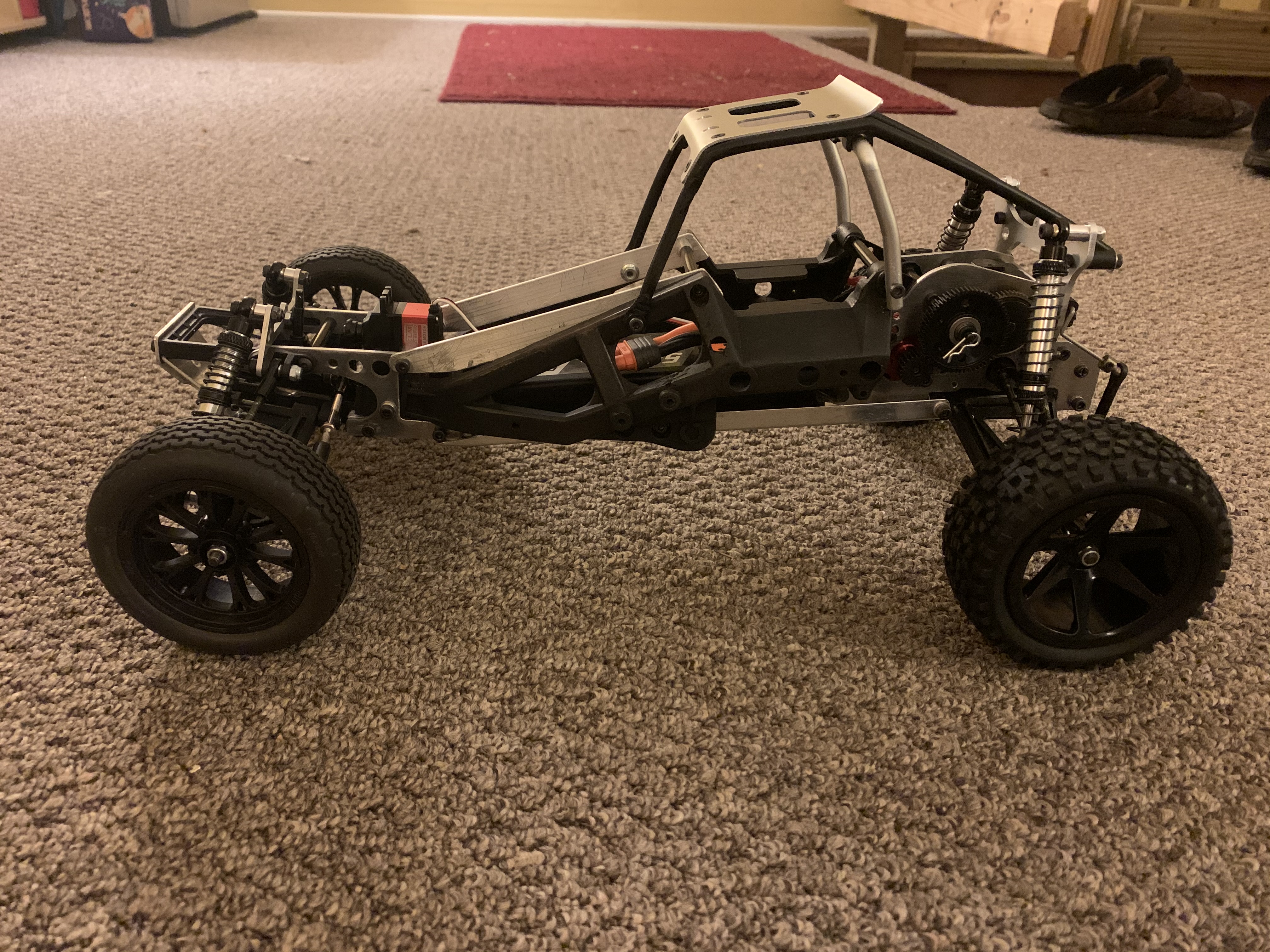 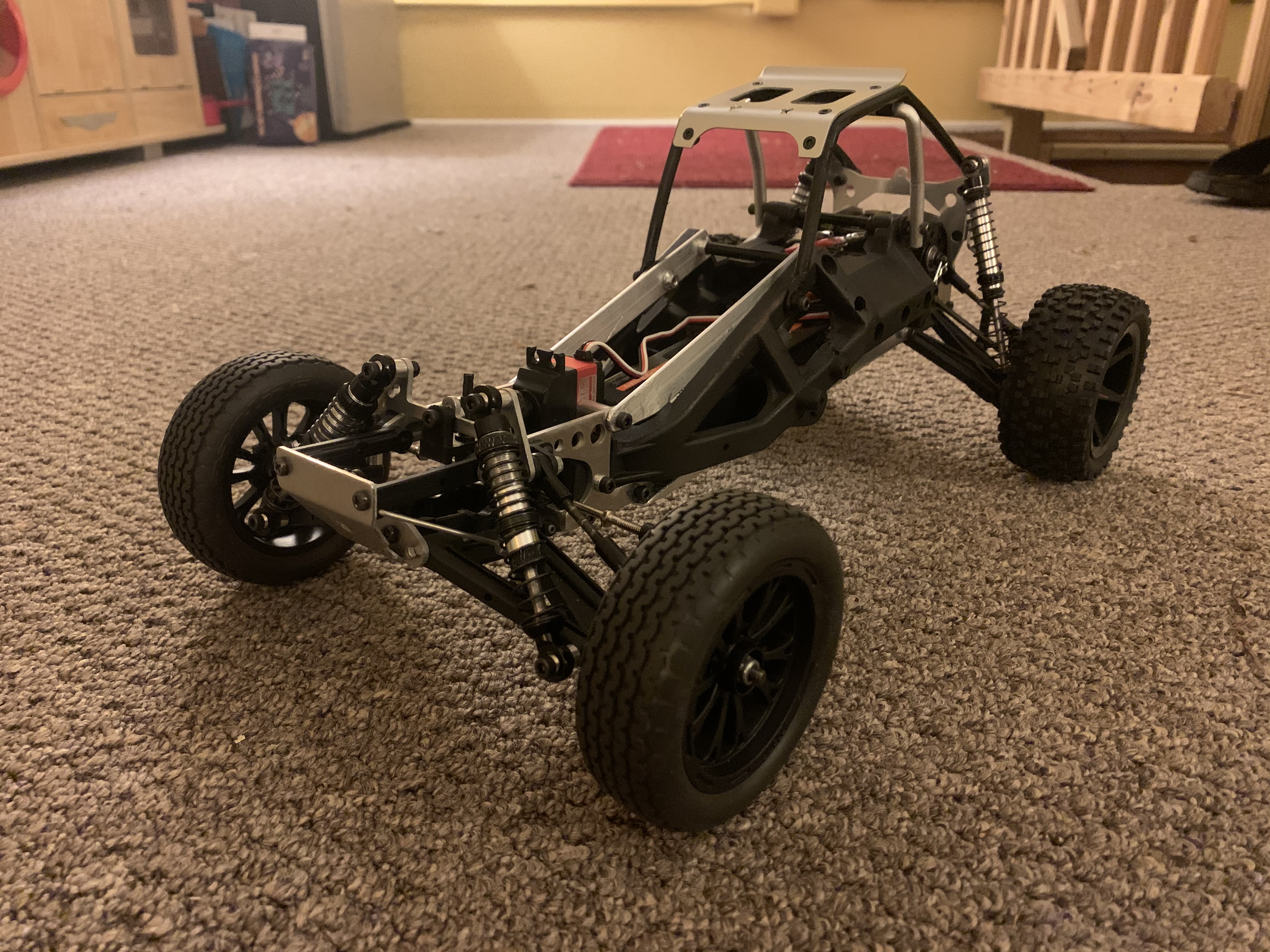 I found an interesting way to connect the rear bars to some spacers jutting out of the rear shock mount plate. 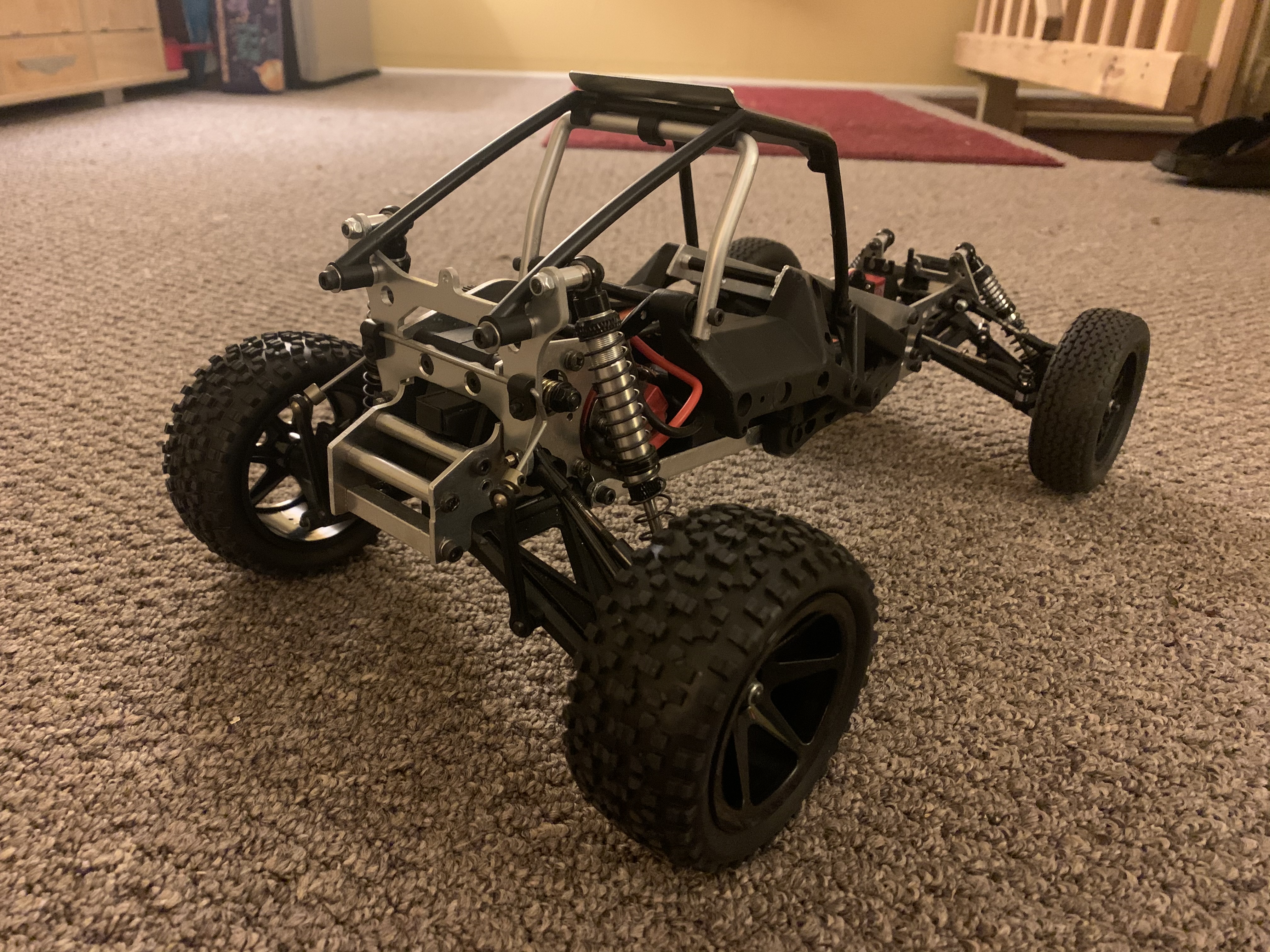 The next step was the body. As mentioned above, I tried to create one using a heat gun and a sheet of lexan. That proved far too difficult. The arduous process was leading to something that looked ok, but I could tell that I wouldn't be crazy with the end product. Lexan goes from pliable to melted really quick. Instead, I decided to chop up a preformed body that was closer to what I was going for. I found this in a BOKI Racing Aftermarket RC10 Protech 2 on Ebay.

Here's the original "fit" which gave me a lot of material to work with: 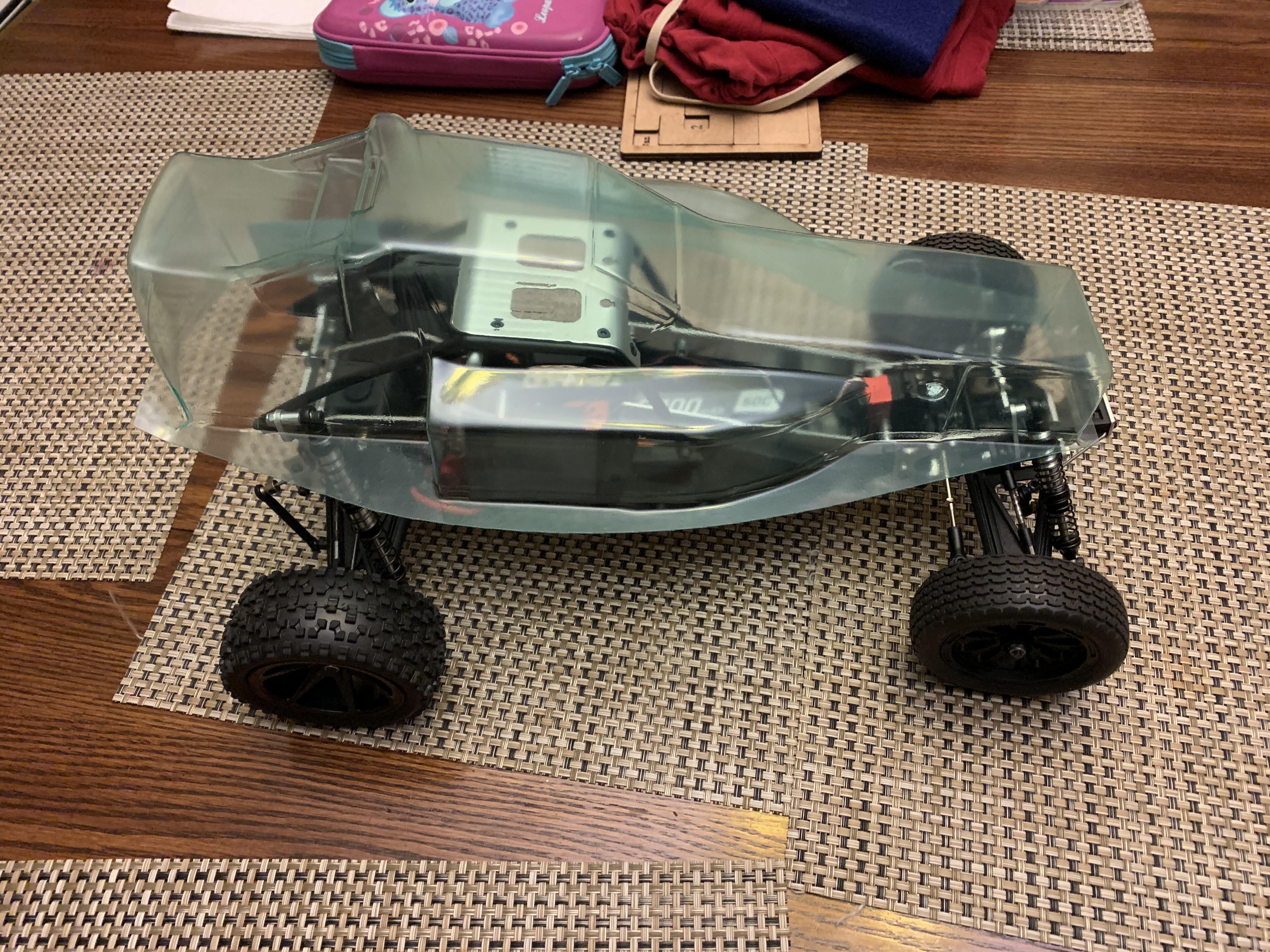 Slowly trimming away, I brought it down over the chassis: 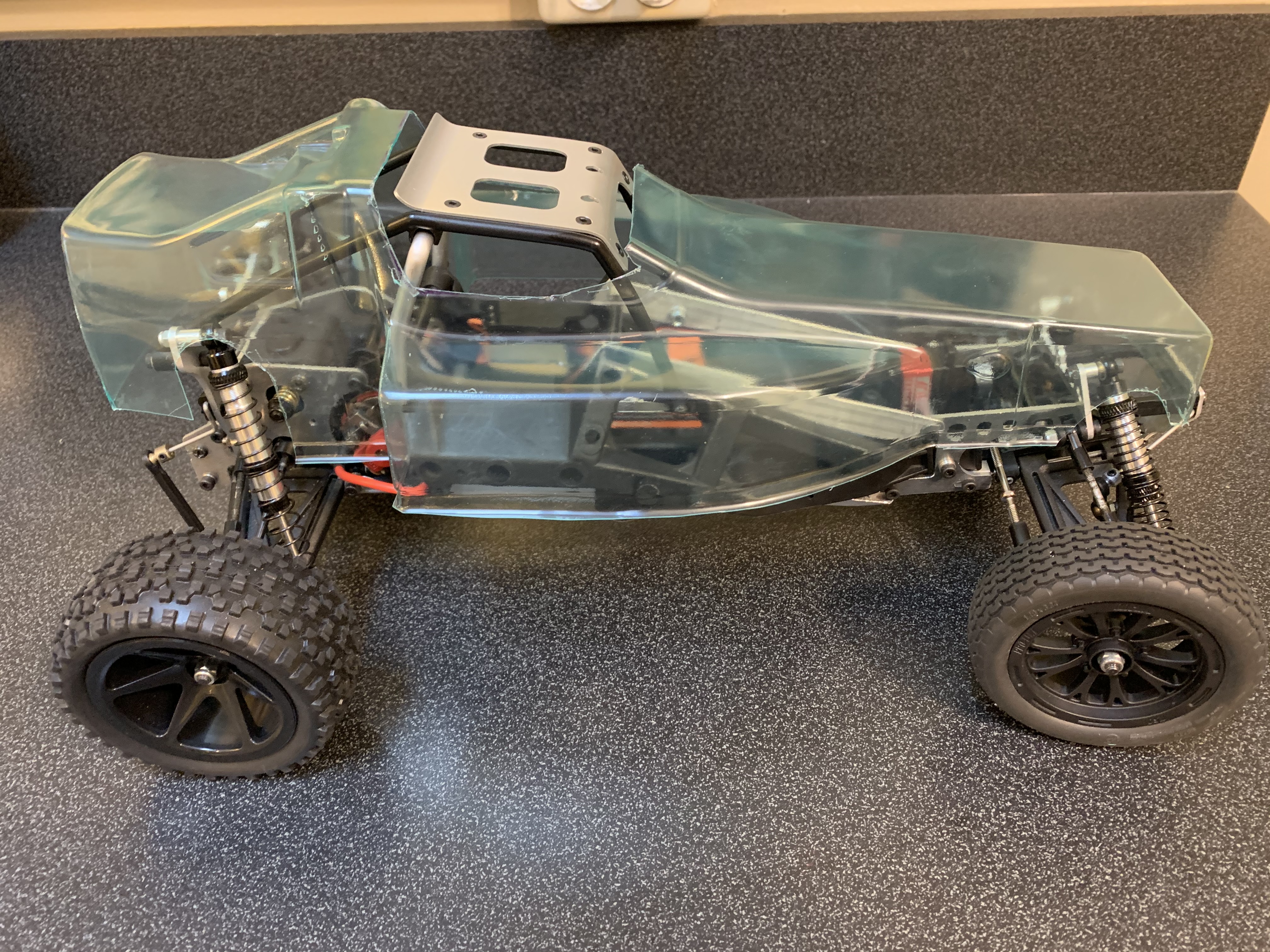 And then I trimmed a bit more: 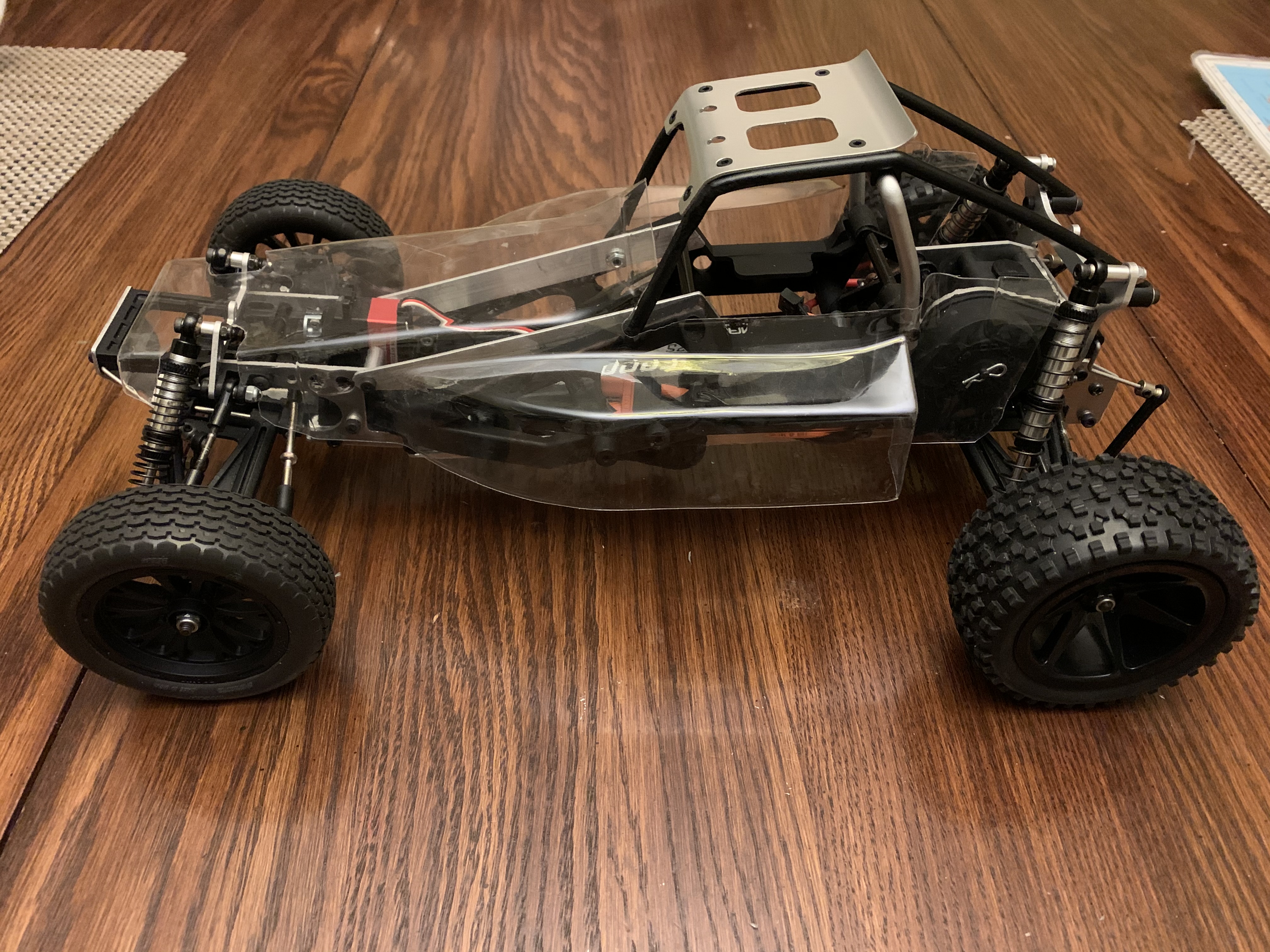 While I was working to get the body on the chassis, I decided that the roll cage could use some more work. To add some more form to it, and to better secure the back end, I ran some spacers between the rear shock mounts to the roll cage (I also reversed the vertical bar): 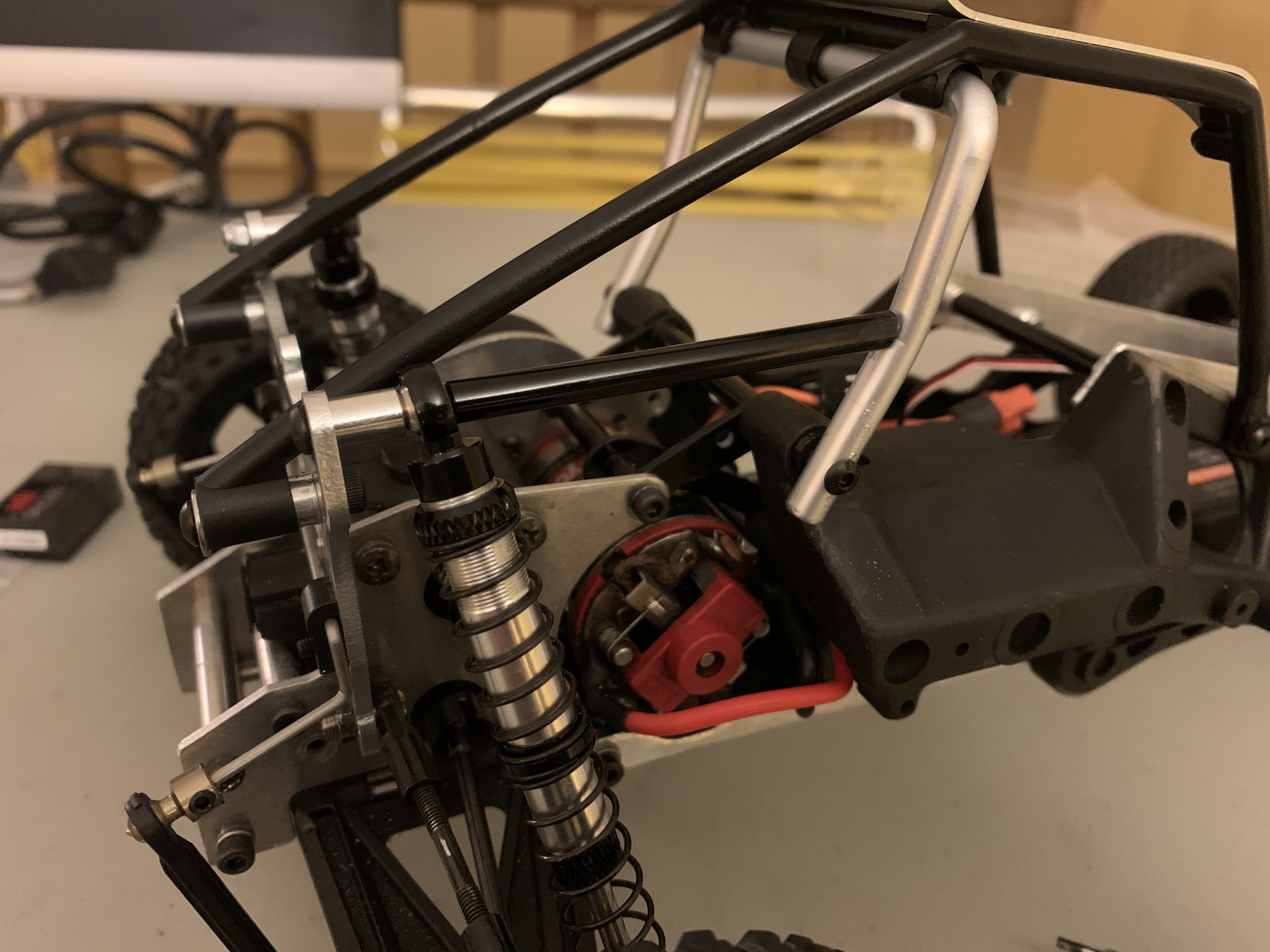 I might not be done with the roll cage just yet.

And then the paint: 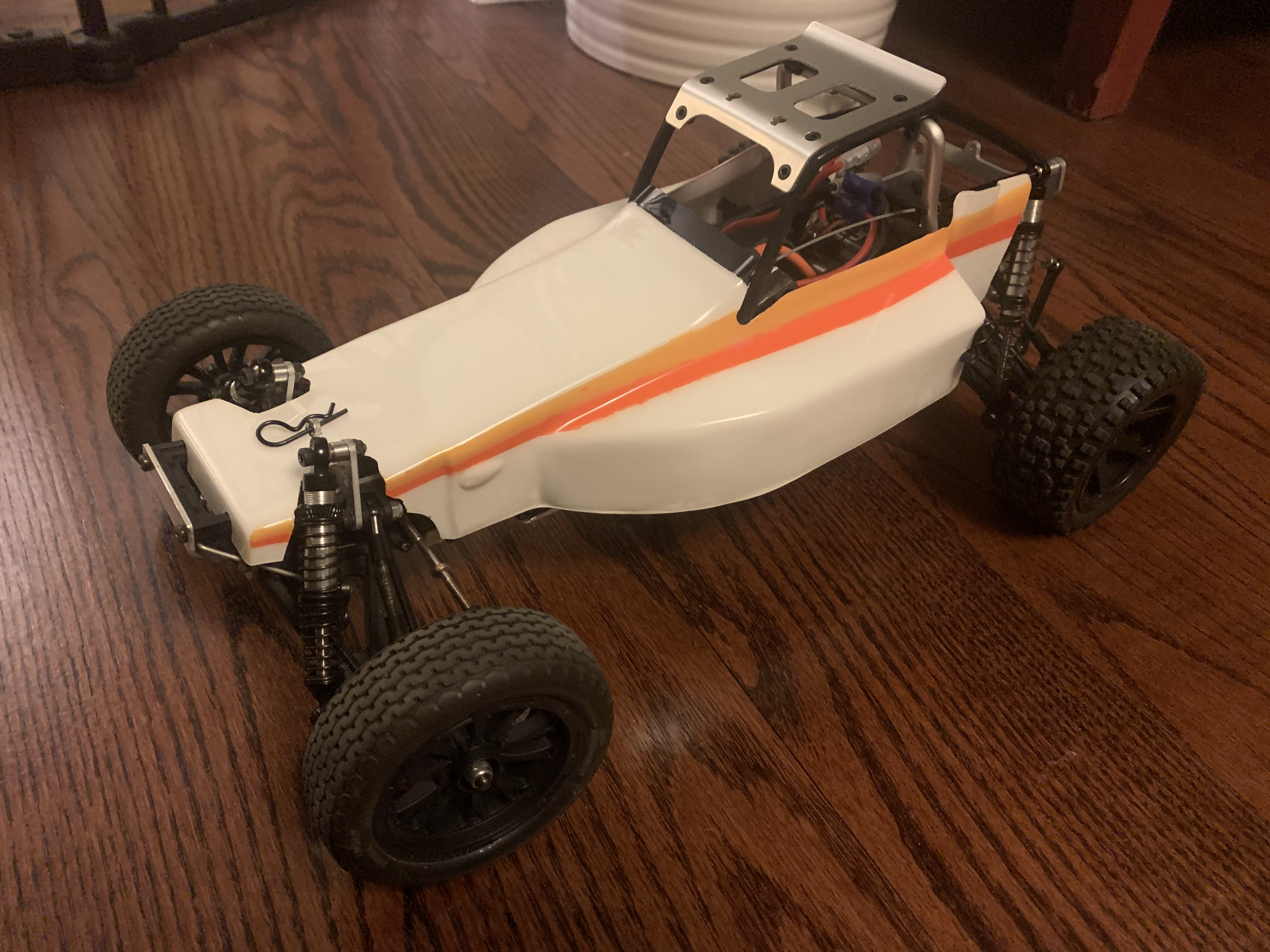 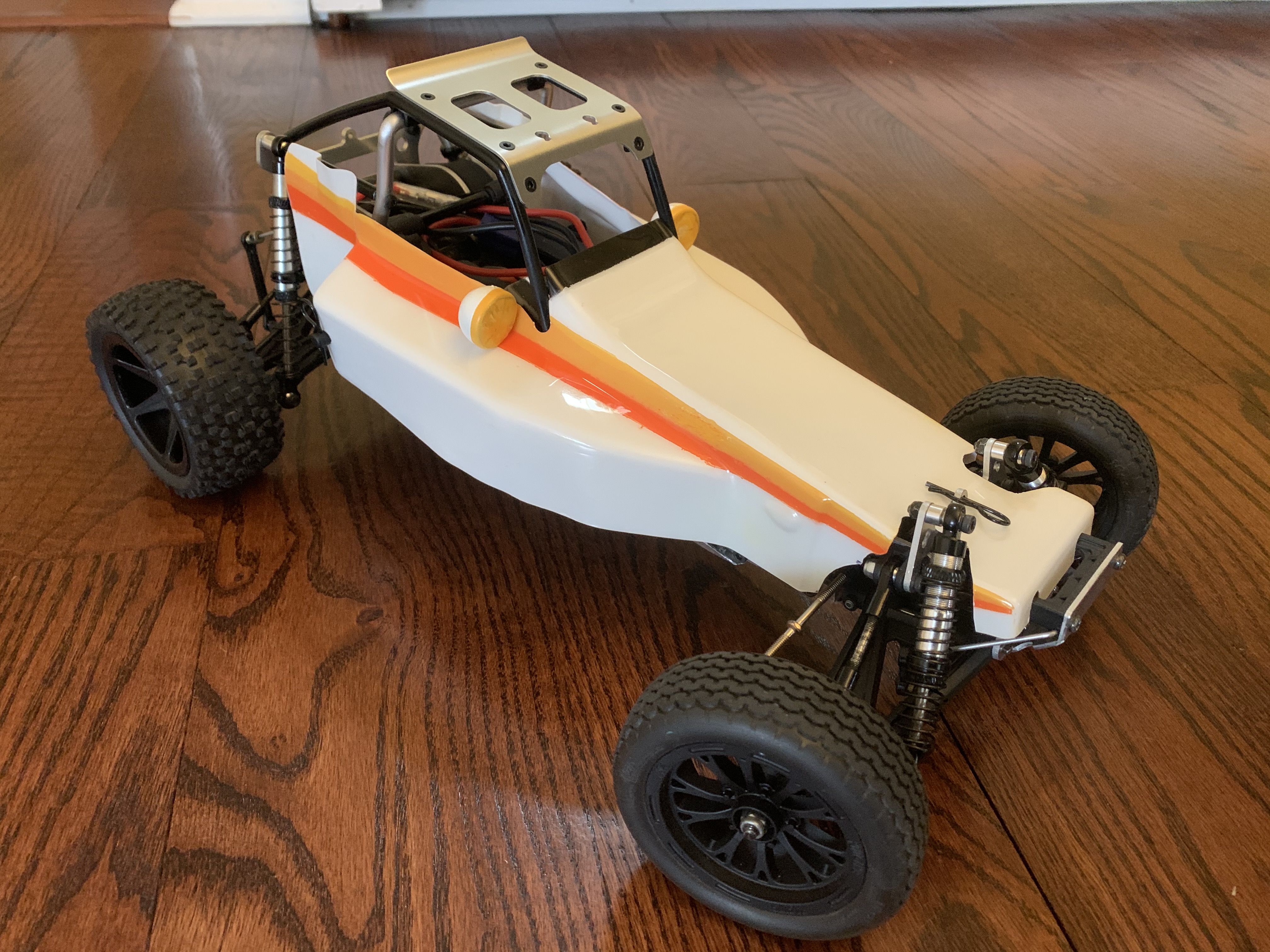 I have some decals on order from MCI Racing, and a few more tweaks that I would like to make. I've added oil to the shocks, and greased the gearbox. I have also added an ESC and a receiver.

Next up, finishing the roll cage (I'd like some bars running across the back), adding decals, and taking it for a spin. ATM I have my old Kyosho 240S in there. I'll post that next. I was pleasantly suprised by the handling. 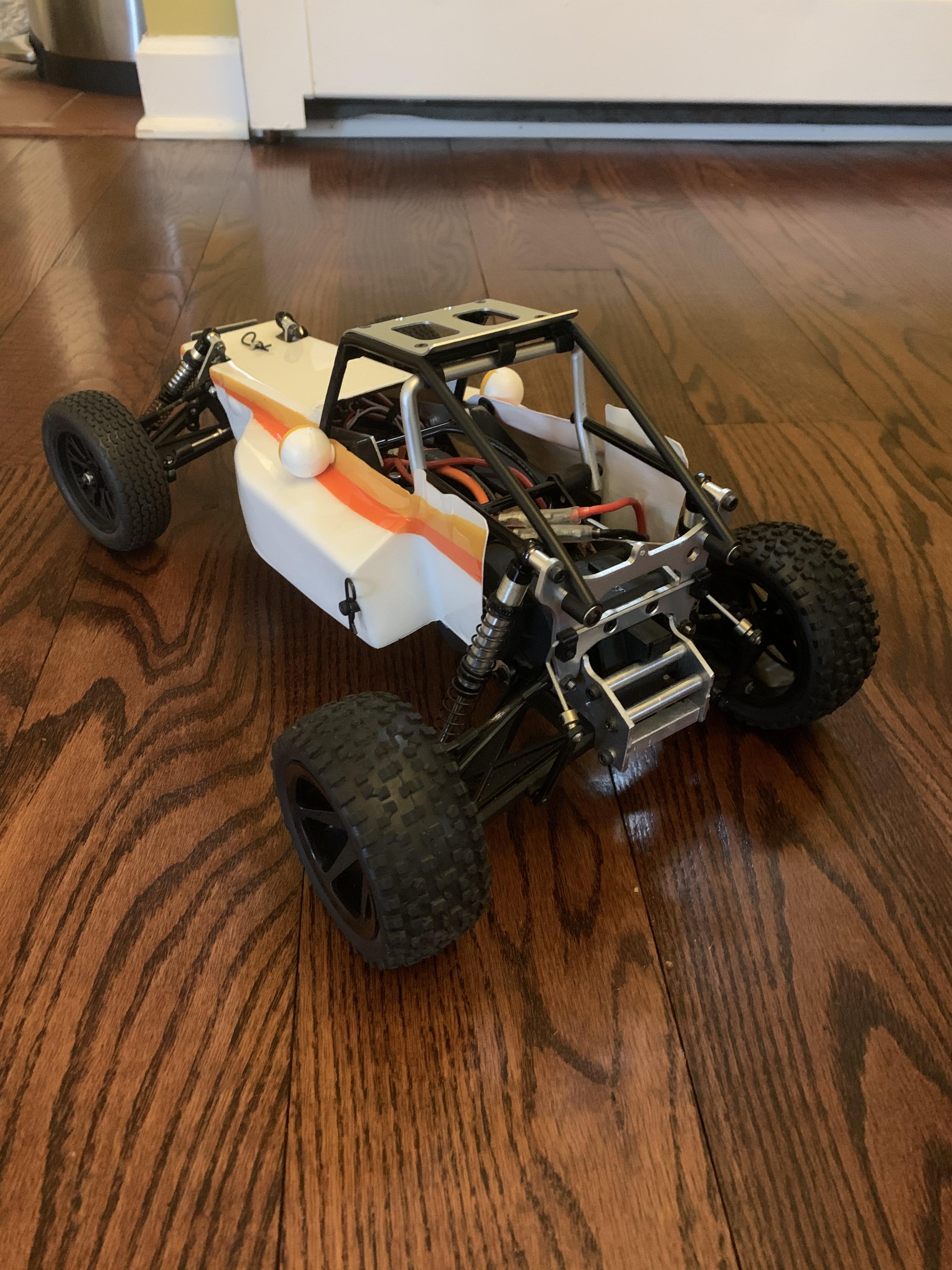 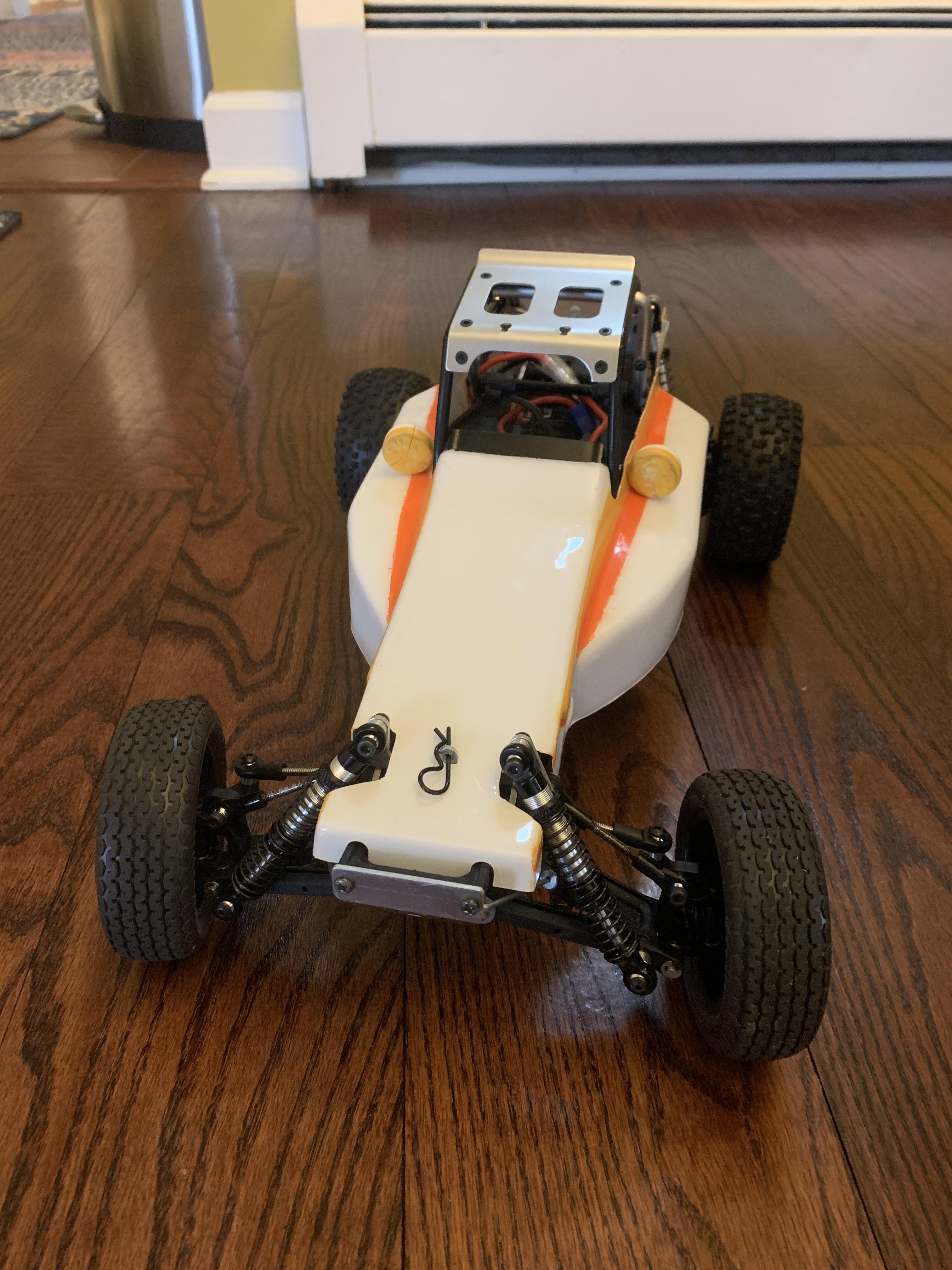 It probably needs a driver. I have also painted a spoiler, which I might add or make optional. Some of the decals I am using are from the Tamiya Frog, which includes an awesome "No Guts No Glory" spoiler decal. I almost want to add it for that alone.

Under the conditions you've outlined, I'm not sure that the rear spoiler is, in fact, "optional". :)

If you have trouble keeping the front on the ground, you could install like an F1-ish front panel/spoiler/idontknow to push air up and anchor the front wheels down. But, haha! that'd only be if you were to ever ridiculously supercharge the engine, haha!

"The Scorpion's rollcage is more angled than I wanted, however, so using a vice and a heatgun, I brought the angle more vertical"

Why did you want it less angled? Any functional reason or just cause it looks cooler and more bratty?

Mount a Pontiac Fiero body on it and it's an instant classic.