TL;DR: They applied the poison to the inside of his underpants.

K: May I ask you: There is no problem, discussing this over an unsecured line, you are sure of it?

Next time, Konstantin Borisovich, consider asking this before the conversation and not at the end. Not that the stranger who called you will give you a straight answer. Not that there will ever be a next time for you...

Poor Konstantin's fall from a high-level balcony in the near future is terribly unfortunate.

Dude. Novichok is a TOPICAL poison?!?

Man, I'm still in the 1970's James Bond mindset that they need to break the skin to administer a lethal dose... you know, the ole' umbrella with a syringe kind of thing...

VX was discovered at Porton Down in the early '50s, continuing research done by IG Farben in the '30s. Kim Jong-un used it to poison his brother in law in 2017.

VX is so old-school that the technique for administering an agonist is what gave us the epipen. That which my daughter has to carry around in case of peanuts was developed in case the USSR decided to fumigate Western Europe as the tanks rolled.

Kolokol-1, the agent used in the "rescue" of the Moscow Opera House in 2002, is believed to be an aerosolized carfentanil derivative. LD-50 on fentanil is 2mg (12 grains of salt) with an LD-50 on carfentanil estimated at approximately 1% that of fentanil (one tenth of a grain of salt).

They want everyone to know they tried to kill Navalny.

There are so many more efficient and stealthy ways to kill someone that nerve gas or fucking polonium for christ's sake, that when they use those methods, they may as well just plant a giant Russian flag in the corpse. It's obvious that they're just as interested in the world knowing what they can do as they are in actually killing the target. Publicity and brutality are the point, I suppose as a message to would-be traitors.

What do you know about Mohammed bin Salman? You know you'd never heard of him until 2015 but then, you hadn't exactly heard of any Saudi since King Fahd let the Air Force fly out of Riyadh.

So check it. MBS is the eldest son of the second wife of the twenty-fifth (of 36) sons of Abdulaziz ibn Saud. He is now the de facto ruler of Saudi Arabia, and will be the de jure ruler when his father, King Salman dies.

MBS is, as mentioned, the eldest son of the second wife of King Salman who was, at the time, the mayor of Riyadh. Salman had two sons who took up most of his time and were his obvious heirs - Fahd and Ahmed. They both bred race horses and spent money. One died of a heart attack after complaining of a toothache on July 25 2001. The other died of a heart attack on July 22 2002. Fahd was 45, Ahmed was 43.

King Salman is the ruler of Saudi Arabia because

And they're all royals, who grew up living like royals, rather than hanging out absorbing all things Saudi and dreaming of the day he could change shit.

Mohammed bin Salman is insanely wealthy as all Saudi royals are. But the wealth was never his thing - it was the patriotism that drove him early and often. Which likely gave any intelligence agency worth its salt a rare opportunity, as it's hard to corrupt wealthy royals who learn to be discrete with their sins as they live in a place where singing in public can get you flogged.

There were six heart attacks between MBS and the crown. Maybe they were all organic. Maybe the guy who tortured the crown prince in order to be next in line was just extraordinarily lucky.

or maybe we know about assassination attempts when it's more useful to know about it than not.

I've had the displeasure of spending 4 miserable, 115 degree days in the kingdom. It would take a handsome paycheck to get me back there. They don't let foreigners out of their sight. Never been on a more controlled environment. Felt not exactly unsafe, but uneasy the entire time.

Is there no air conditioning, and isn't it very low humidity? Any idea what the heat index was?

Just trying to compare my own environment.

Oh there's air conditioning. in fact, we weren't allowed to go outside except to walk a few feet to the van. The whole place, the part that foreigners see, is contrived and decadent. Here is the pool at the Ritz Carlton, where we were taken for a buffet dinner one night, which itself would have made Las Vegas blush. 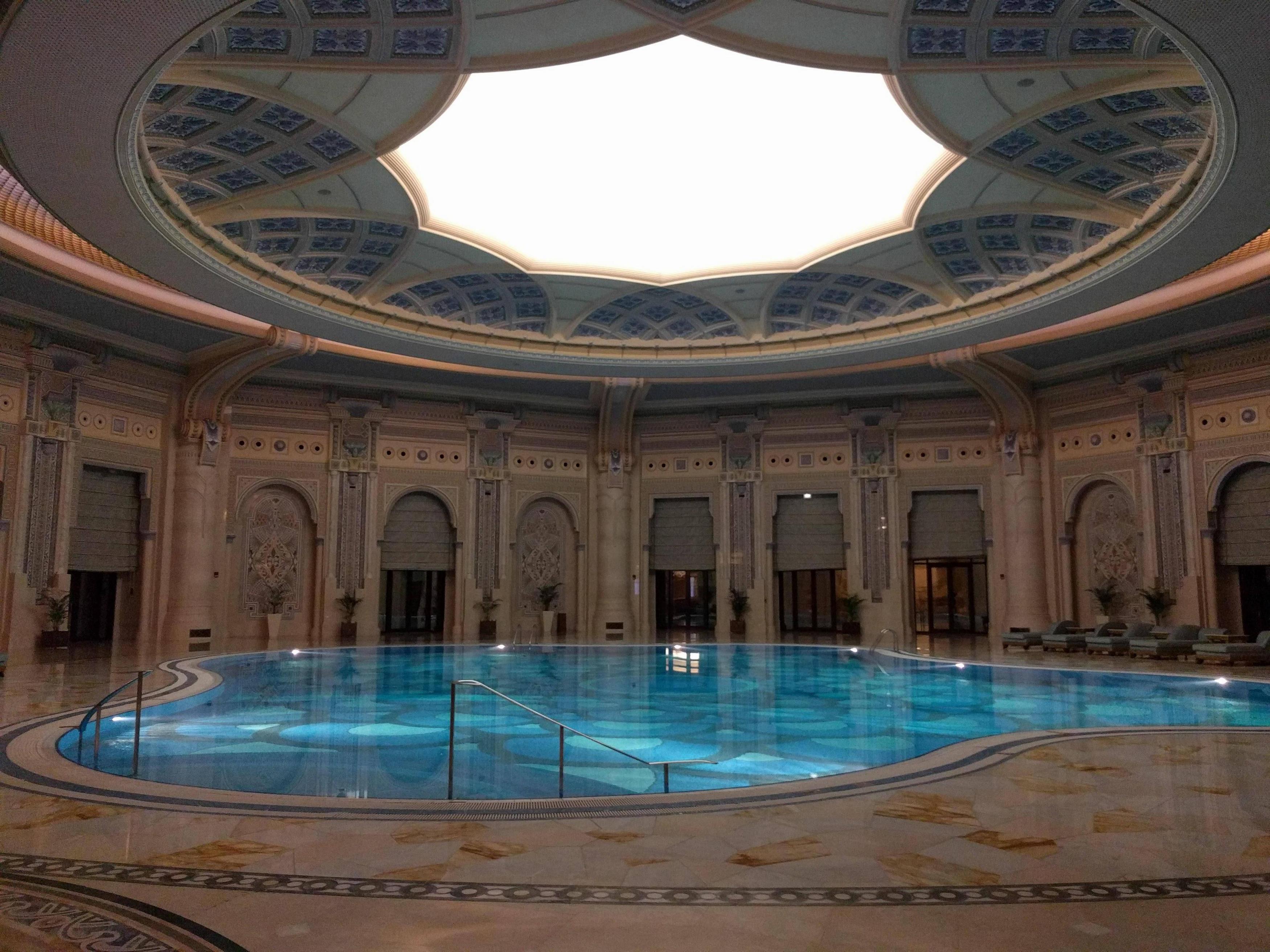 So I suppose I shouldn't complain about the heat, because it wasn't that much of an issue... Just painting a picture.

To give you an idea of the way they treat foreigners, after going through their rigorous customs after a 12 hour flight from Dulles, a military official approached me with a stern face and said, "You need to come with me." Fuck! What did I do? Did they find my empty pill bottle on the plane?! (The pamphlet on the plane did specifically say that importing prescription drugs, even with a prescription in some cases, is punishable by death.) So I get led to this table with two other stern looking Saudis who peer up at me, and say, "Congratulation! You get a free sim card for use in the Kingdom!" Ummm. I'm no cyber security expert, but I demurred nonetheless. (One tipoff that that could be a bad idea was that when I was trying to get a visa, I navigated to their embassy's website, and Google threw up a big red screen that says, "Just don't."

So then they just haul you to the hotel where you're stuck until they come to get you to go to the university. But don't worry, the hotel has the finest selection of non alcoholic beers you've ever seen. Like pages long. They took us out one night for a "fun" night on the town. This consisted of going to a store that sells nothing but dates. Then going to the observation deck of the tallest building in Riyadh, which is called the "99th floor", despite the fact that the building is like 45 stories or something. Should have known they'd be Trump supporters. Then we capped the night off by going to a shopping mall. It had a Starbucks. Cool.

Although it was boring, it wasn't unpleasant per se. Good food and they treated us nicely. But you have a sense of being watched all the time. And no one has a job except the Bangladeshis who suffer in the heat. Boredom. Idle hands. Religious extremism. Surveillance. Not even a move theater to go to. I mean, fuck, I watched some PG-13 action movie on the plane and the blurred out the women's legs when their dresses were above the knee. For real. Yeah, I'd be a fucking terrorist too.

There's no comparison to Texas. Even though your God forsaken state is also way too hot for humans.

I enjoyed that more than a circledot alone can say. Thanks.

Better to be lucky than good!