Some time on vacation driving my Frog led me to consider more options for the Frogtima. I came back and did a 180, literally: 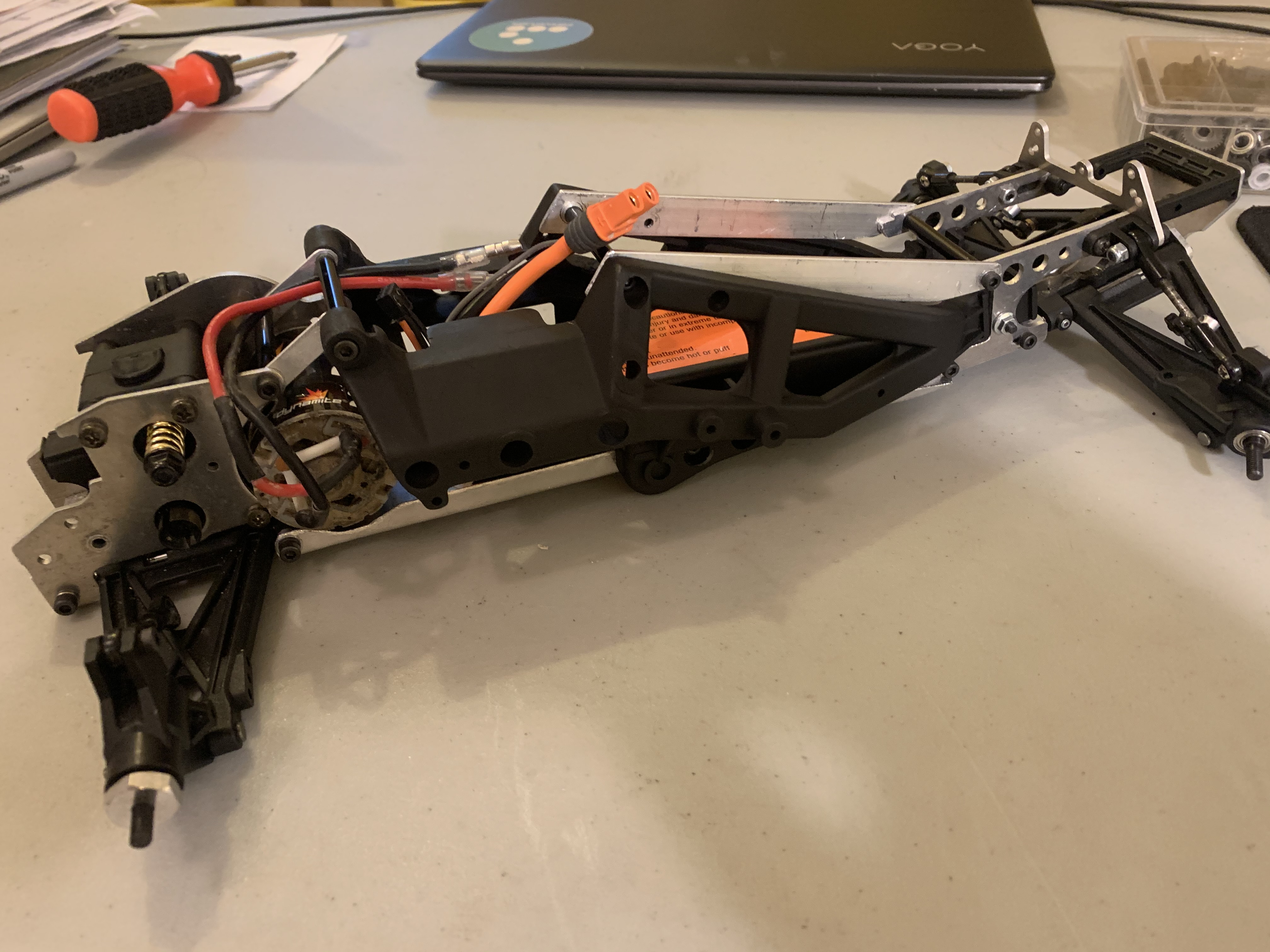 I turned the Optima gearbox around and went for a mid-motor setup. That is the new thing these days, and in terms of balance, it makes sense.

I also painted the Frog chassis black. I tried Rit dye, but it didn't take very well, except for the spots where I cut and sanded it. I used a plastic-bonding primer. I'm sure it will scratch over time, but I can live with it. I think it looks pretty sharp. 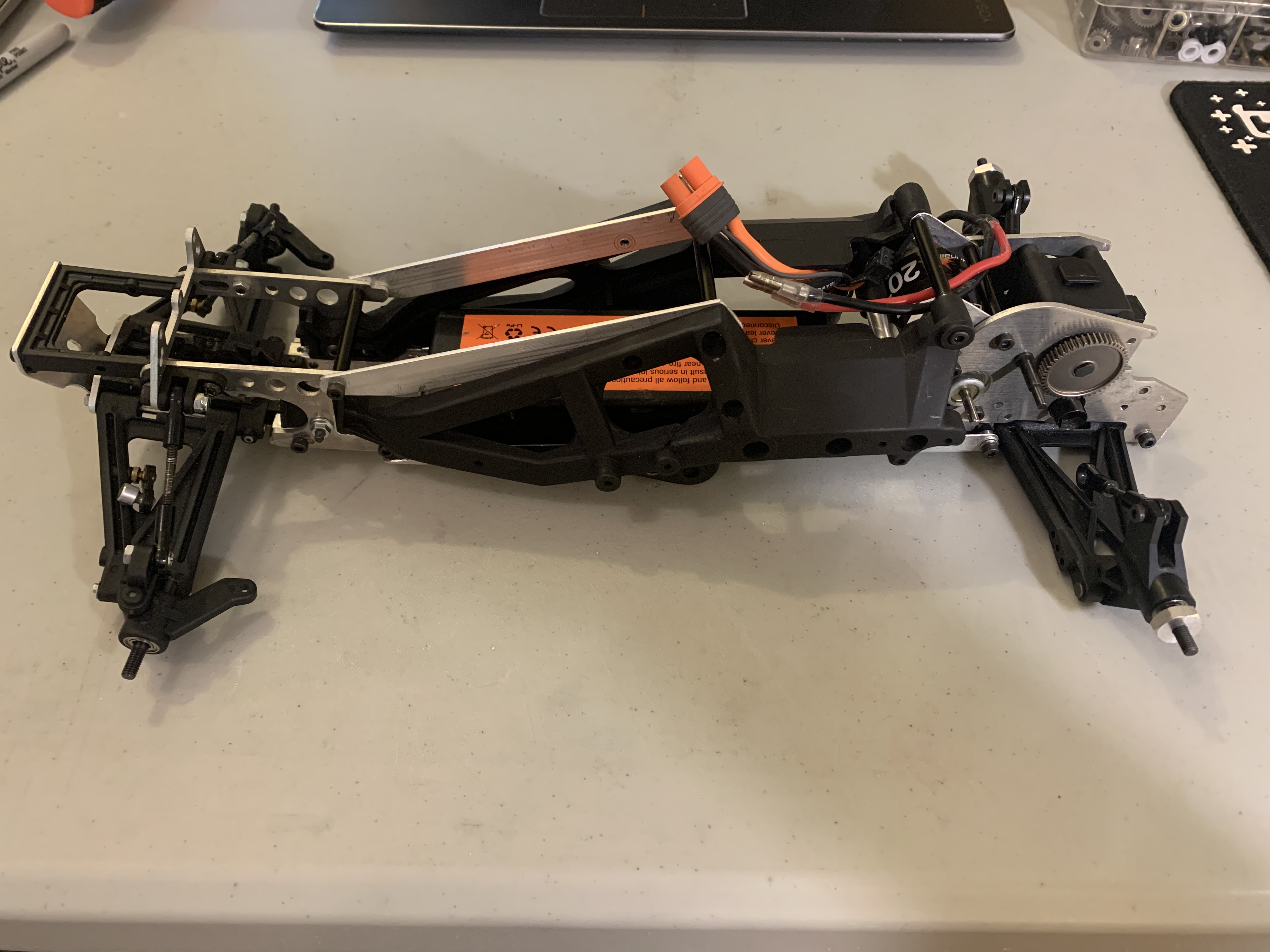 To make room for the motor, I needed to extend the bottom plate, taking the wheelbase from 268mm to 290mm. It's still within ROAR's 292mm for 1/10 scale, but just barely. It's not going to be the lightest buggy, but I think it will be well-balanced.

I decided to go with the stock rear shock mount, and I am waiting for a replacement to arrive since I hacked up the original. Next step is the steering. 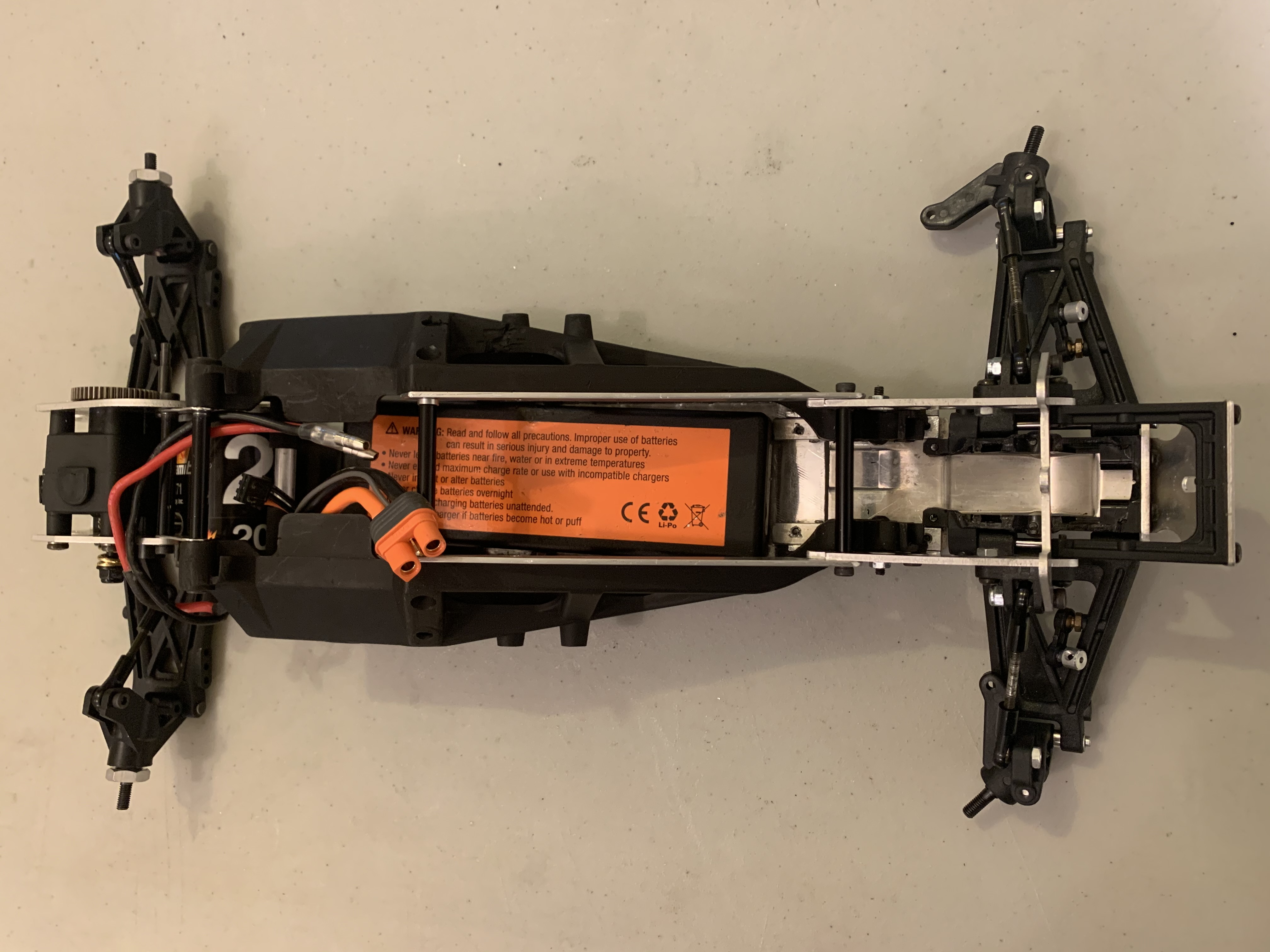 At this point I lapsed a bit with taking photos of the process.

I added shocks (double spring) on the front and back, and decided to use the Optima mounts. The rear mount was reversed with the gearbox, but it had little impact on the placement. I also used the Optima sway bars, although the back sway bars needed some trimming due to the gearbox flip. I mounted the front shocks to the arms rather than the hubs to make them more vertical than horizontal. 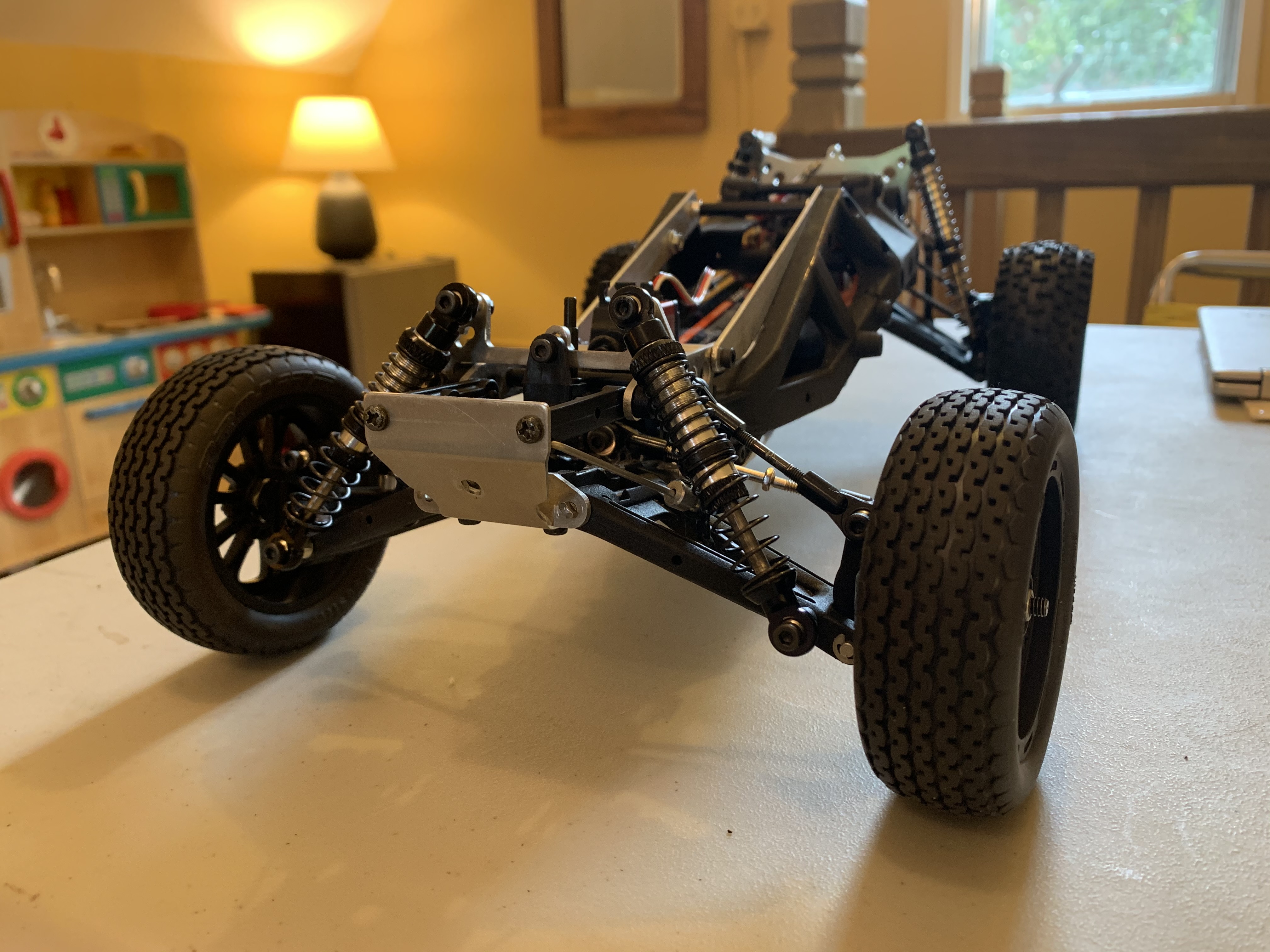 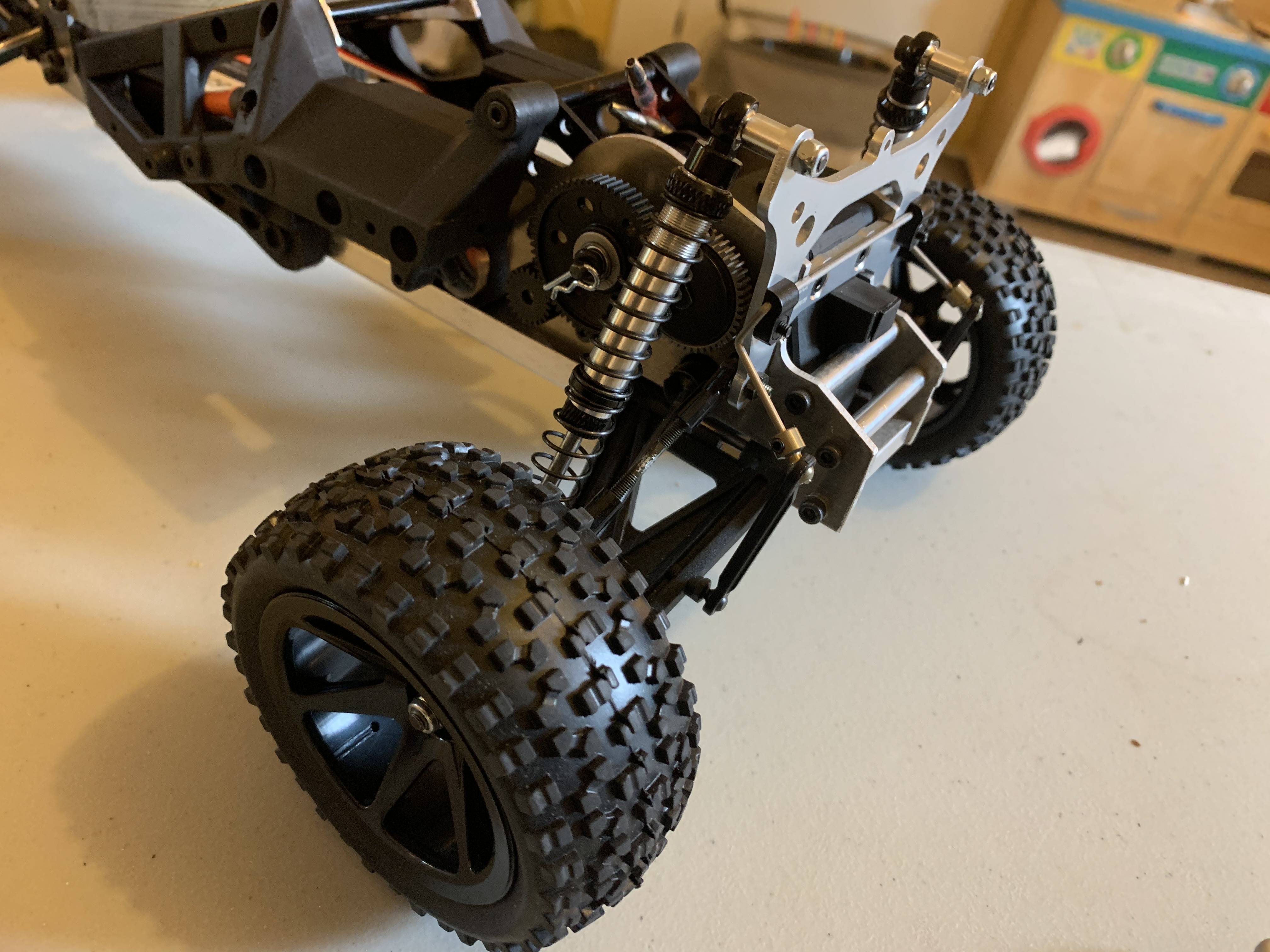 I also added wheels and tires. The fronts are Proline Hoosier's (I rubbed the logo paint off), and the rear are some generics I got off ebay. As mentioned, I'd like to get a 70's Funco look to the buggy, so I'll probably replace the rears with a different tread. 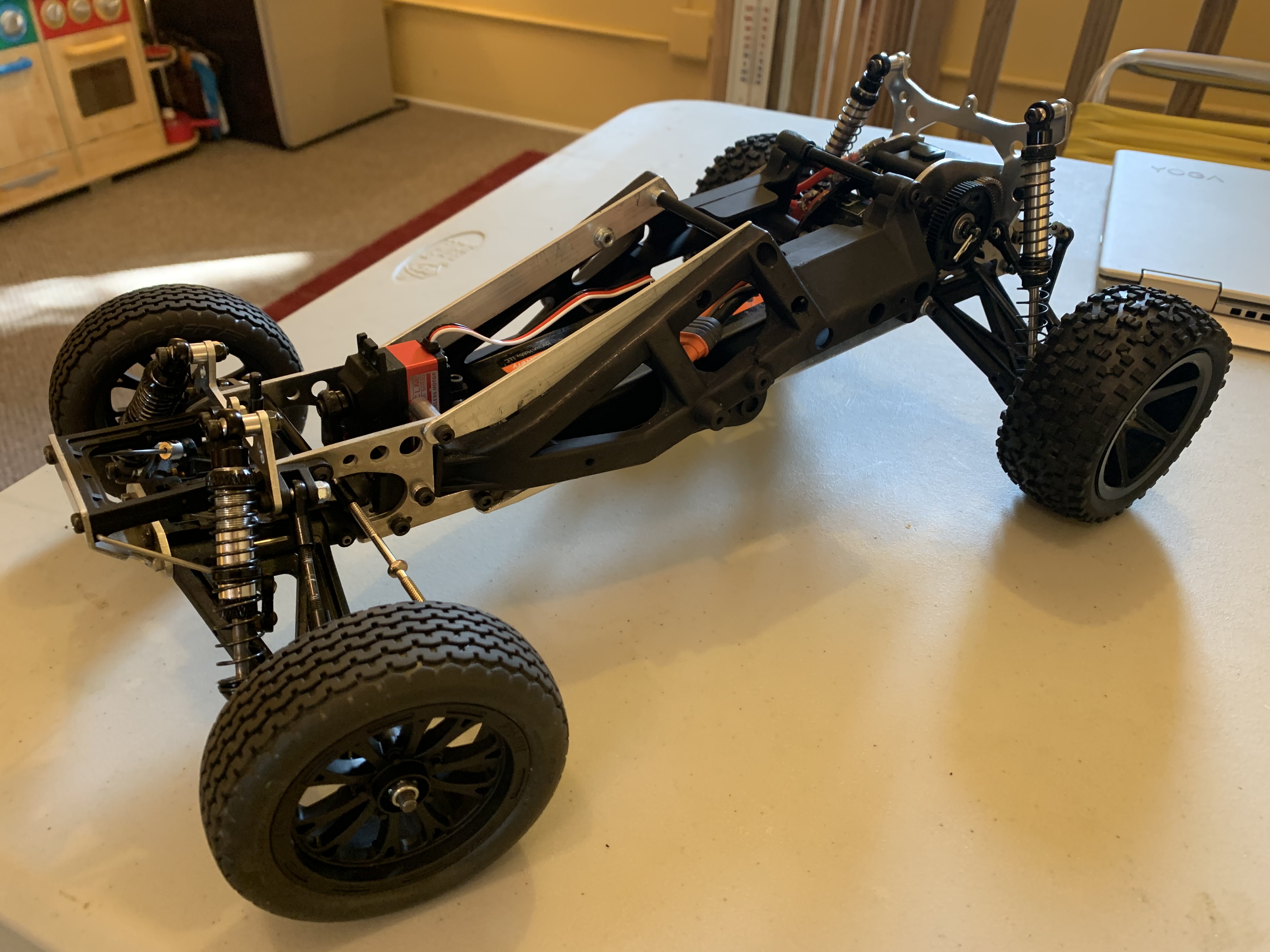 The biggest challenge thus far was the steering servo. I finally went with a AGFrc 8.5kg coreless servo that was both small enough yet provided enough torque. Mounting was a bit tricky, but I eventually got a setup that worked. There's no servo-saver, which most modern RC cars have, but a direct link was good enough for the Frog, so it's good enough for the Frogtima. We'll see how that works out. I'll likely trim the top mounts off to make room for the body. I'd like to get the hood as low profile as possible. I have some bent ball links coming that will bring the steering links more perpendicular rather than sweeping back, which will reduce the impact of vertical wheel travel on the alignment. 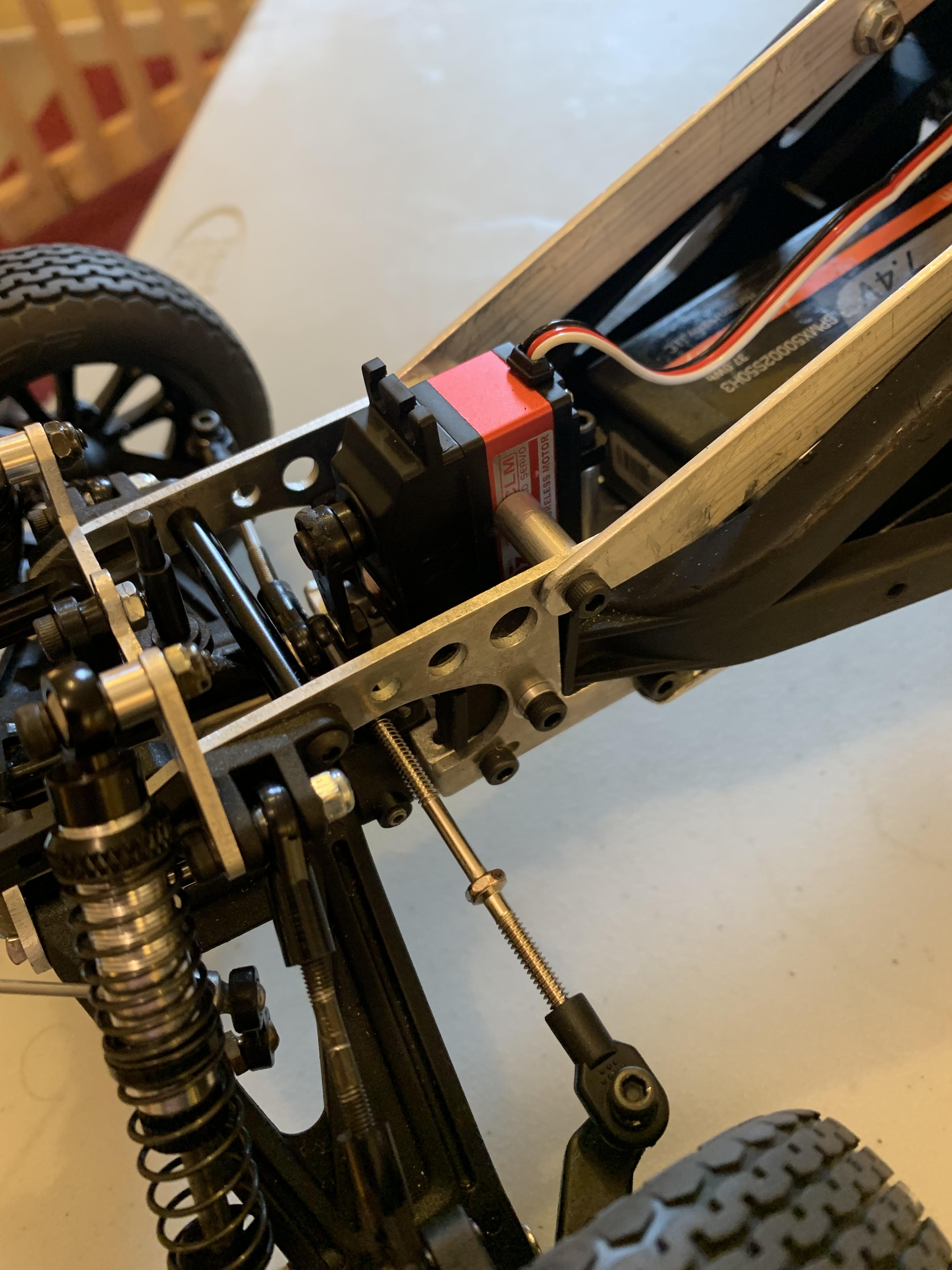 The Frogtima has a healthy amount of ground-clearance. In the future I might get some shorter stocks for a lower optional stance. 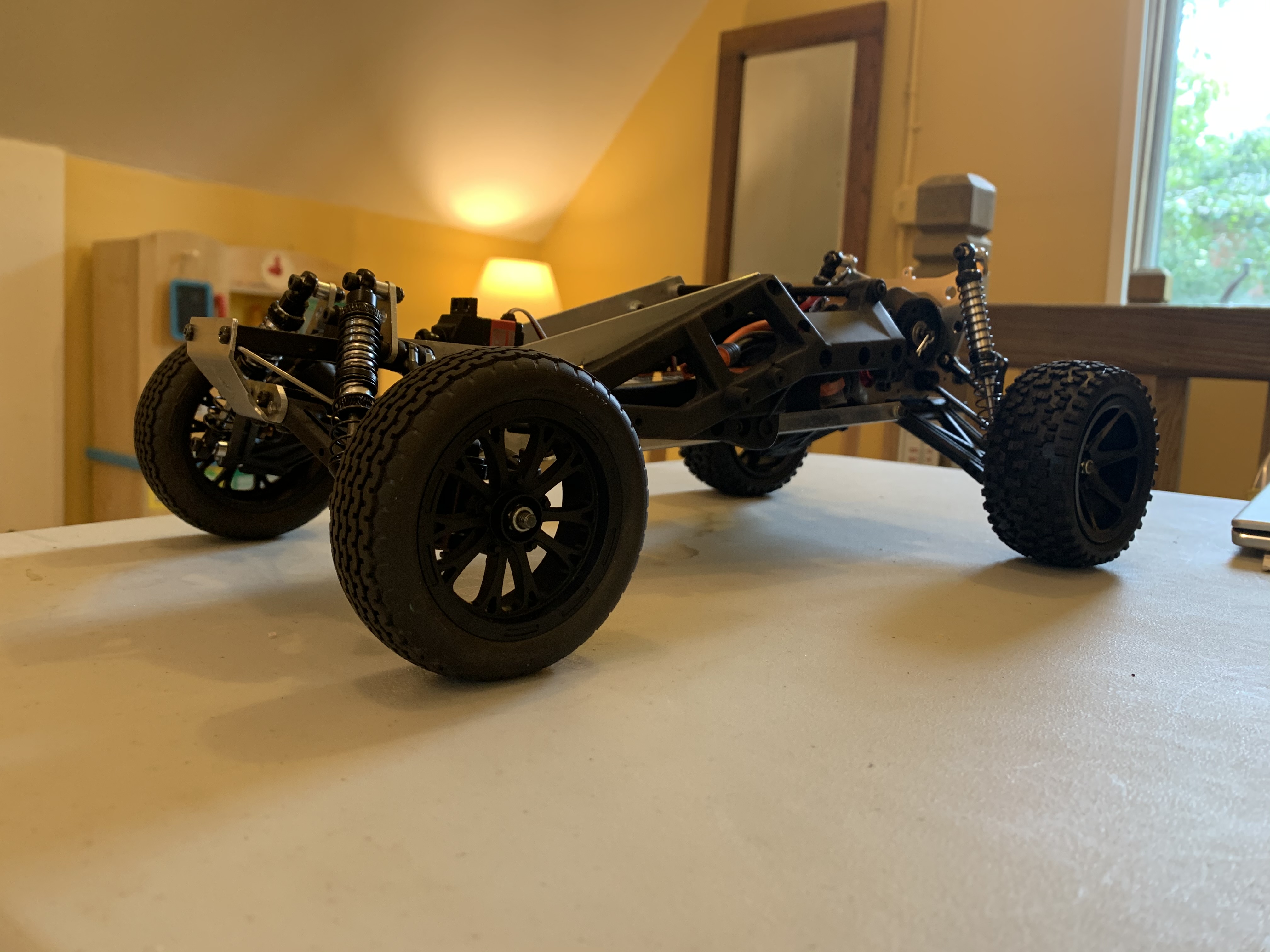 I am happy with the look.

My next step is a driver roll cage. After that, I am going to attempt to create a body with a flat piece of lexan and a heat gun. That should be interesting...

I continue to love everything about this project