The next step was to attach the dog bone axles and the upper rear arms. As I had previously chopped up the Optima mount that holds the upper rear arms (and rear shocks), I had to create a new solution. I found the placement for the arm mount attachment could be matched by extending some aluminum spacers from the Frog chassis.

I drilled some holes: 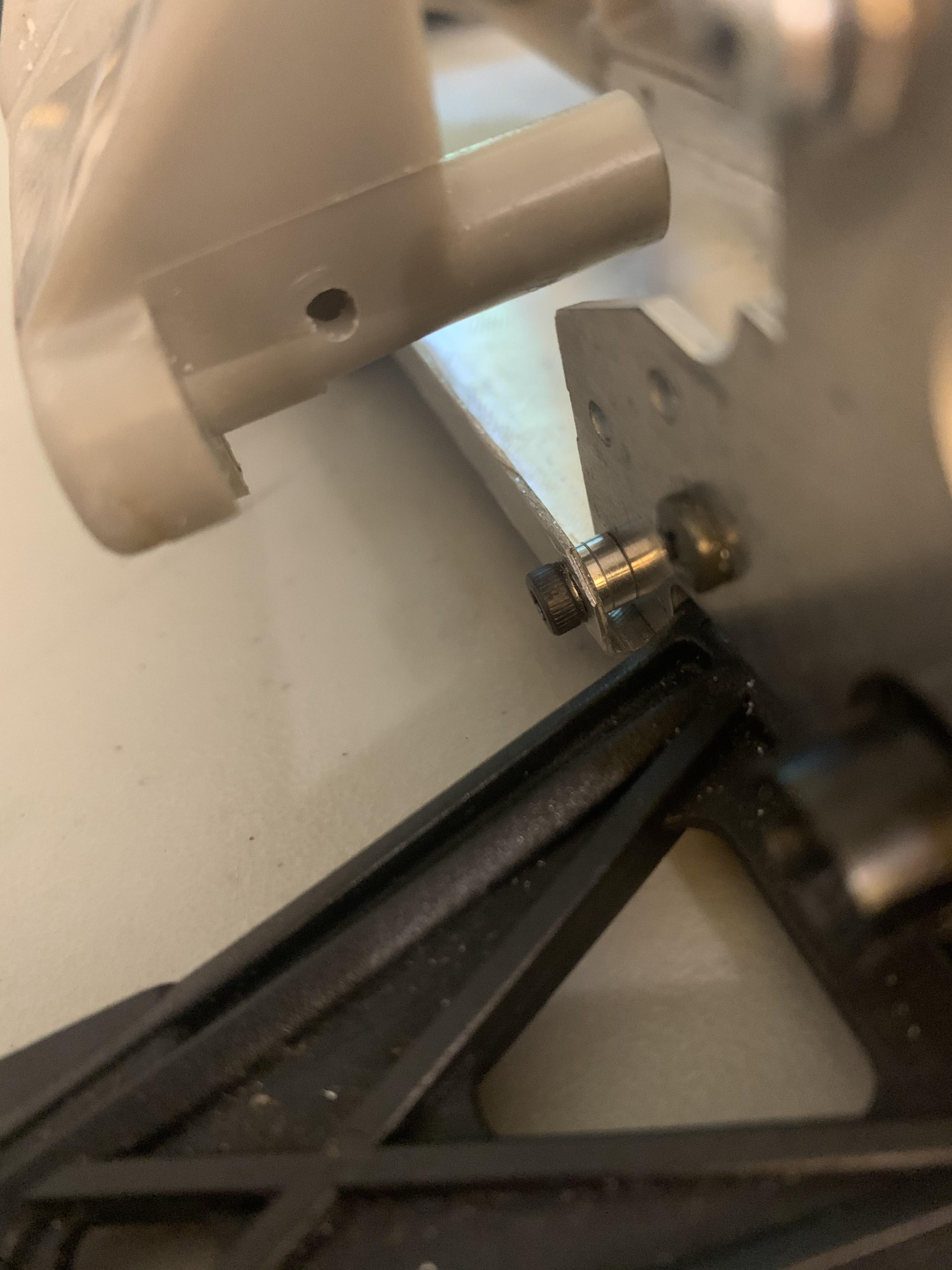 and attached the spacers on M3 screws coming from the inside. 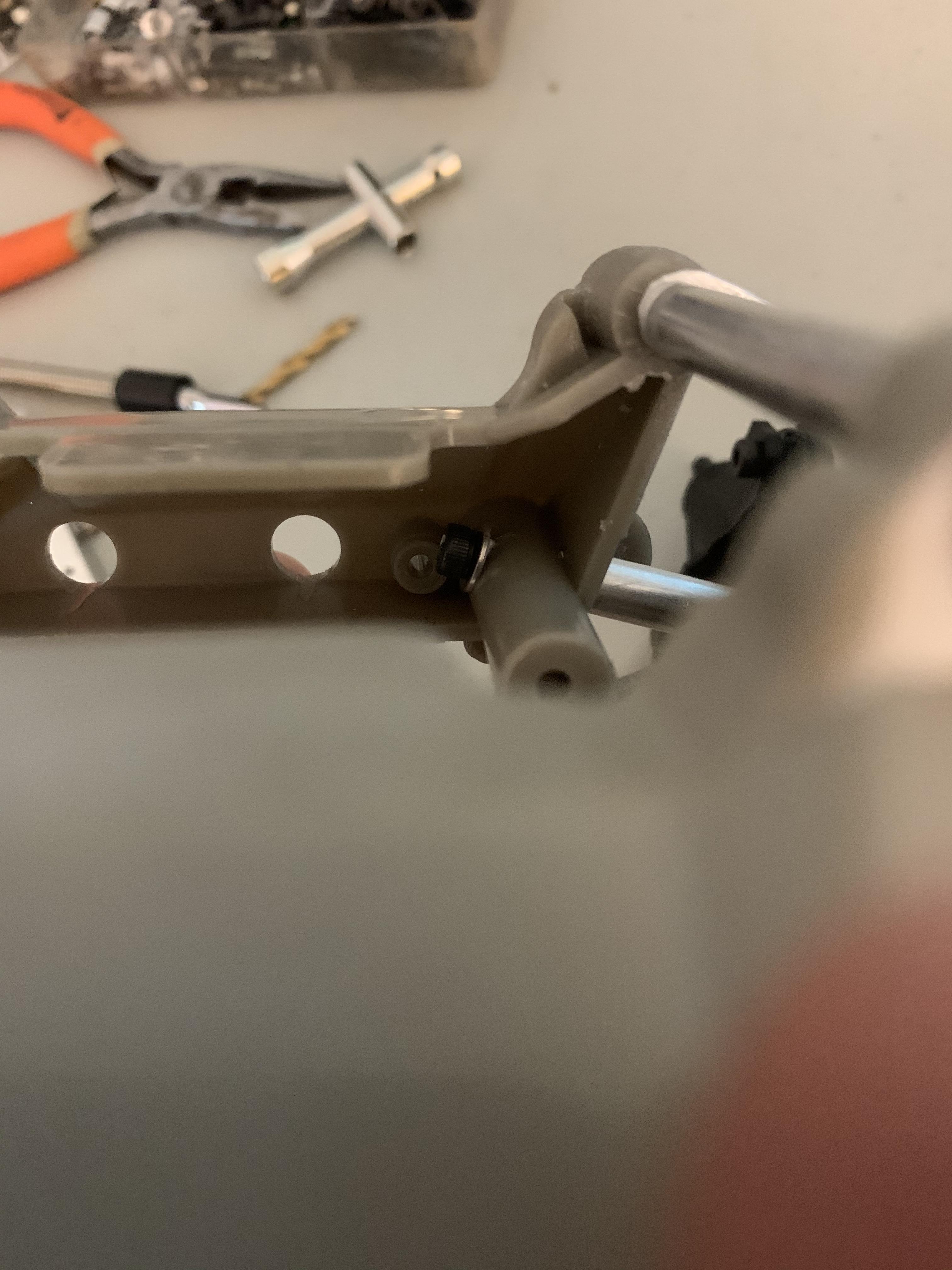 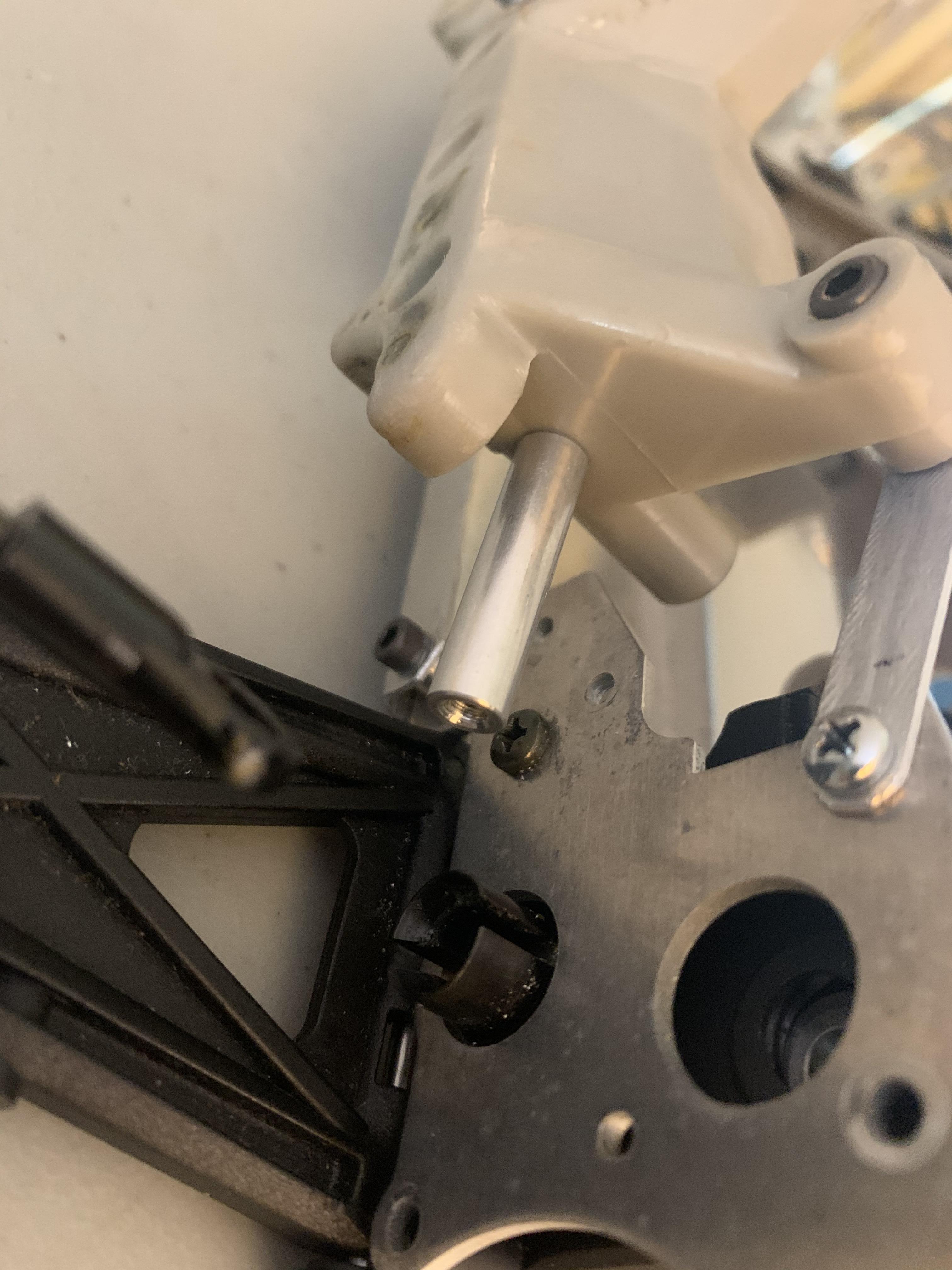 Slightly hacky, but not terrible. The ball mounts for the arms screw nicely into the spacers: 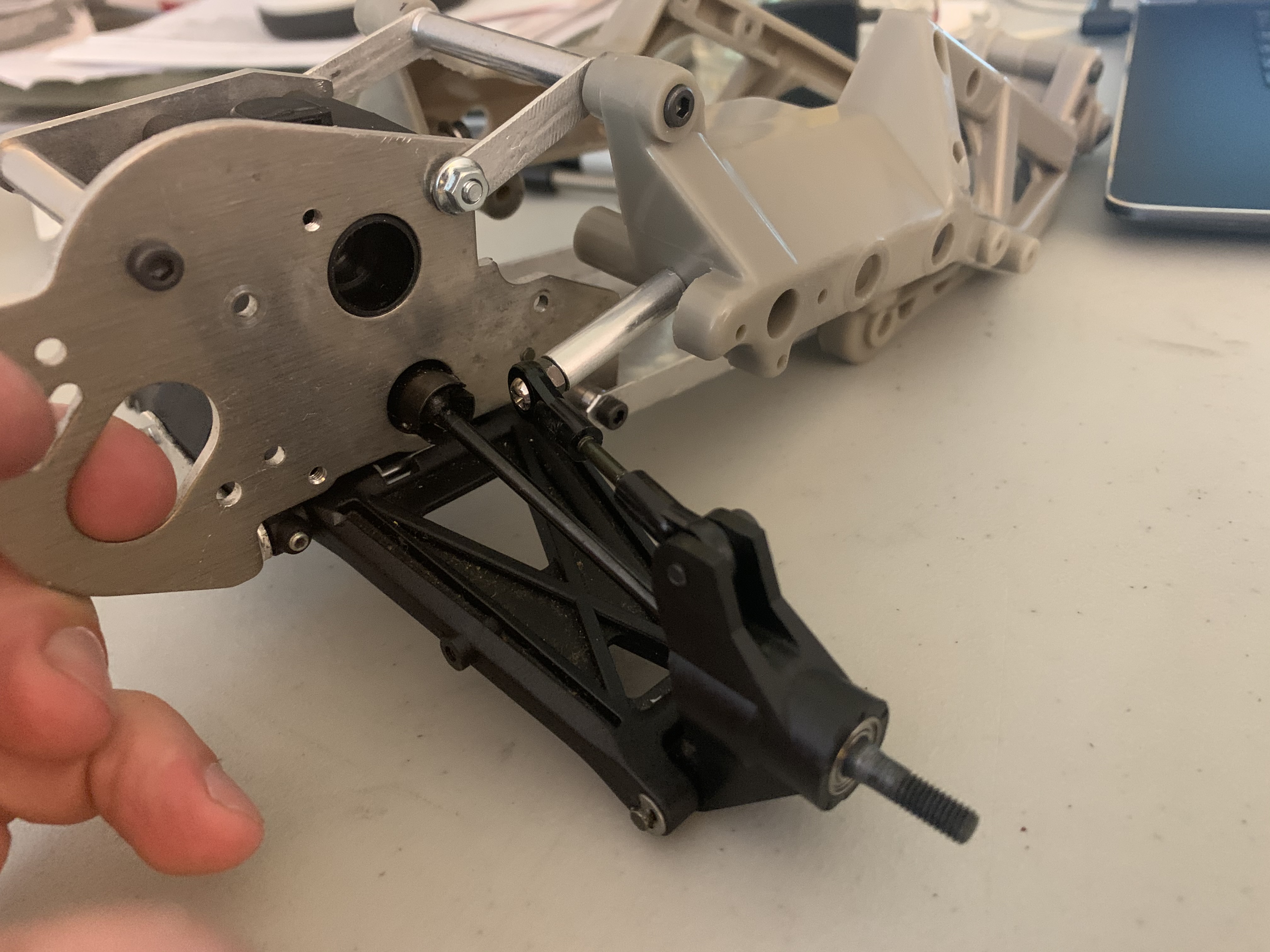 Thus the rear arm was mounted.

The arm doesn't take a lot of force, but I wasn't crazy about the leverage it had on that spacer, so I added some screws (and aluminum tube sheathing) coming from the gearbox into the spacers. This firmed up the mount, and also increased the strength of the Frog/Optima connection. 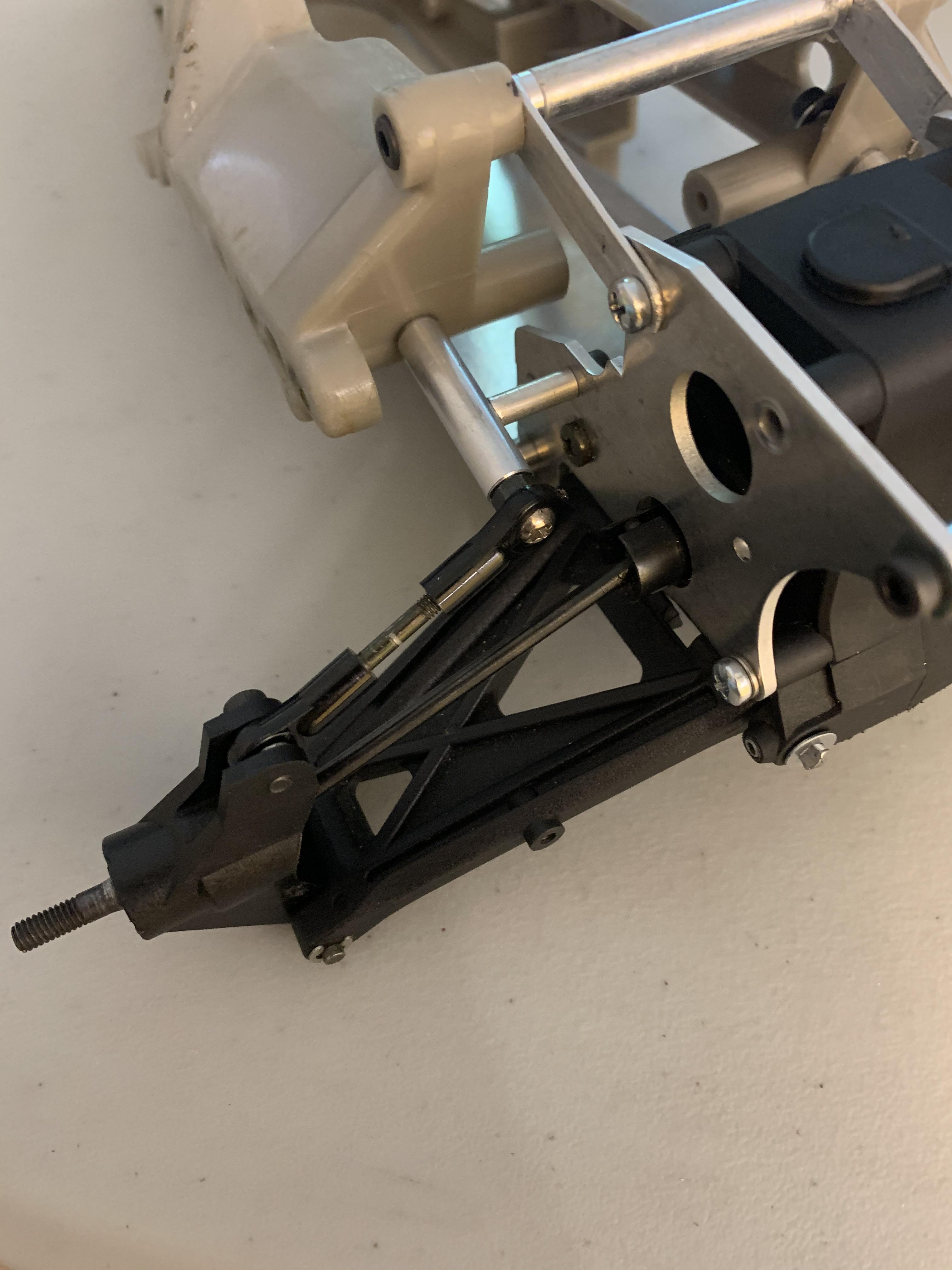 My next step was staring a this for a while and trying to figure out how to join the two: 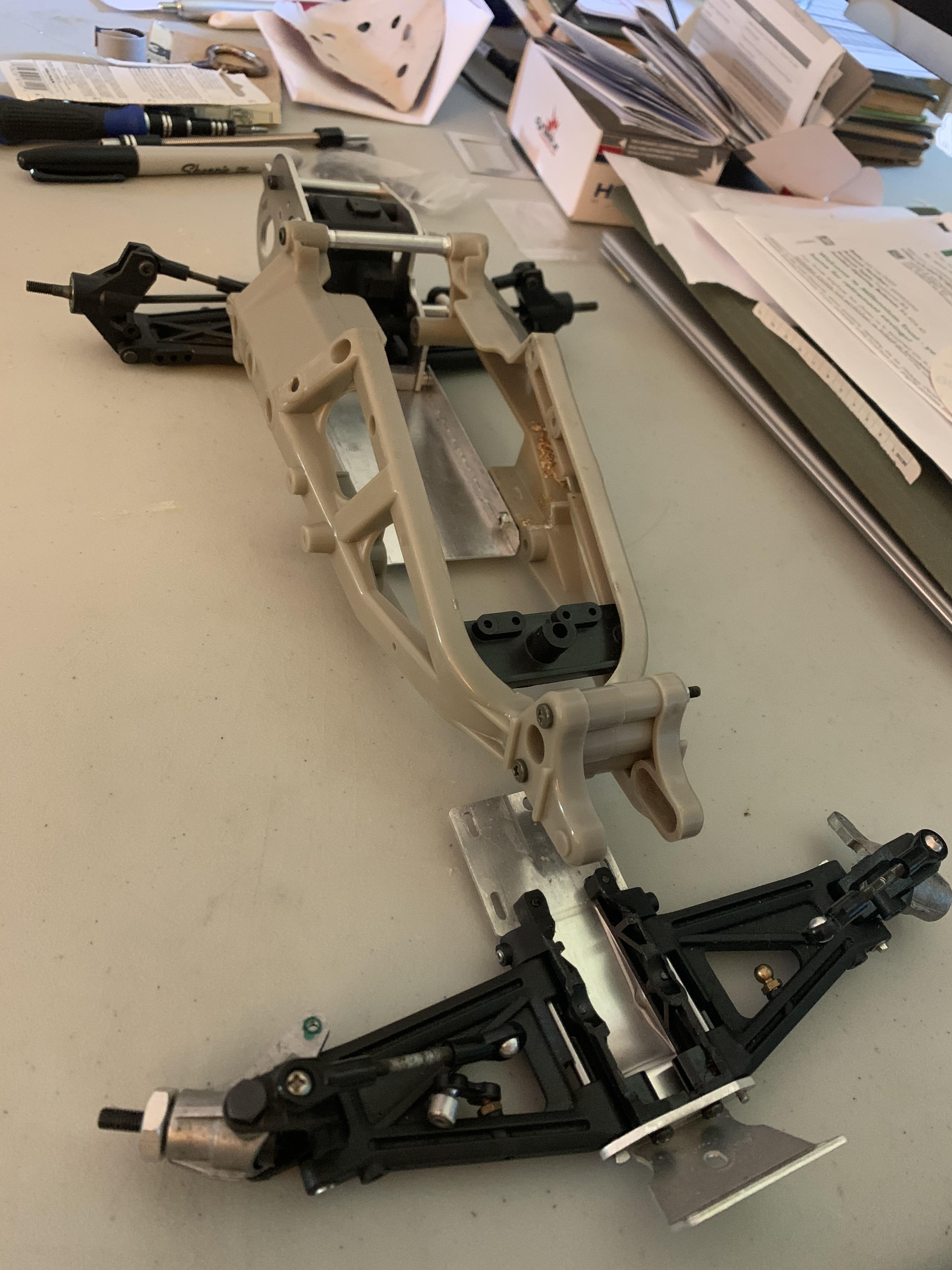 I cut off the top of front Optima gearbox (as it won't be 4WD), but left the lower swing arm portion. However, it didn't make sense to keep the Optima knuckles and axles, so I ordered some Kyosho Ultima knuckles, and was pleased to find that I could add them with just the addition of an aluminum spacer. 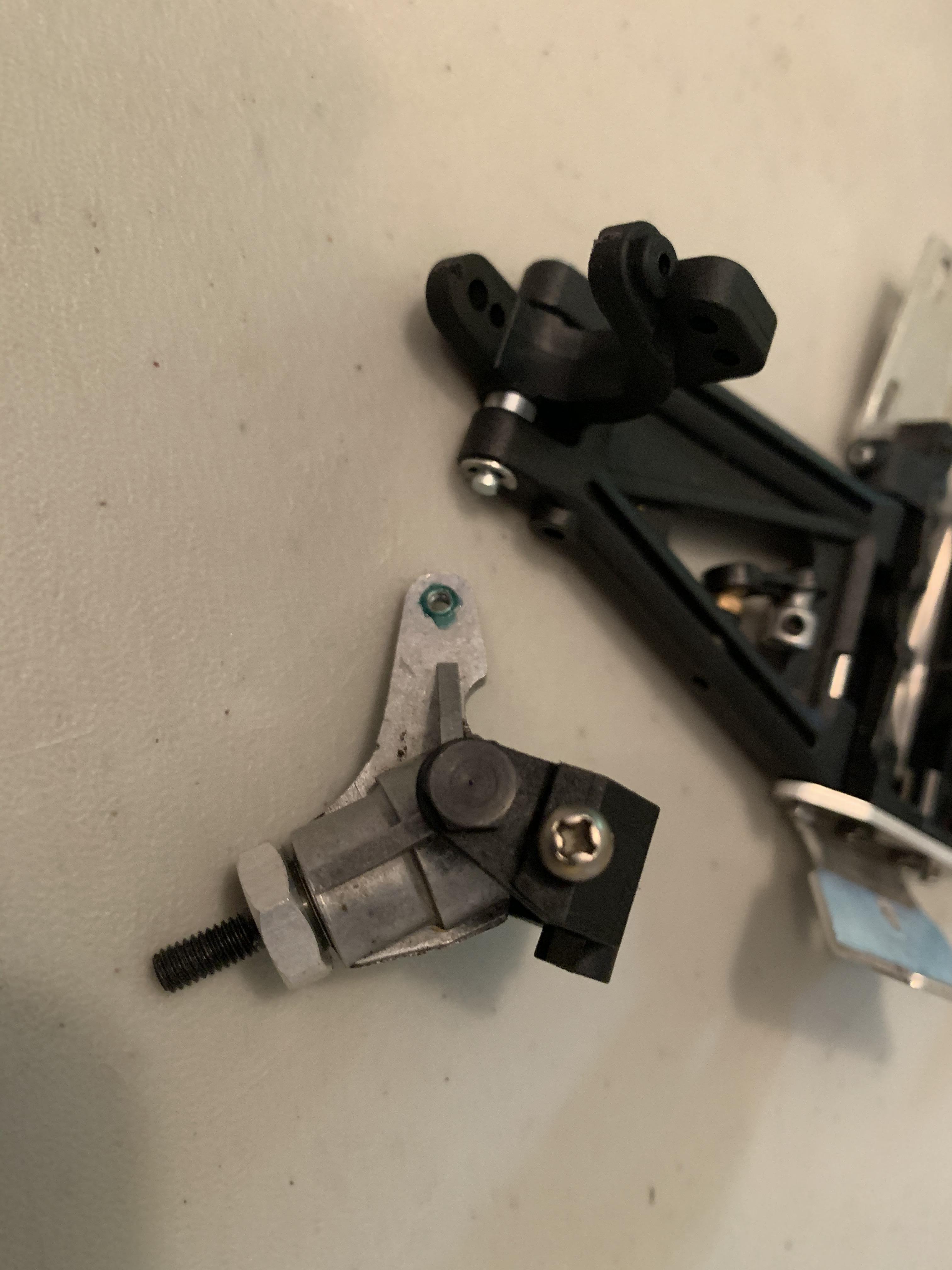 I also did some cutting into the Frog chassis, and finally figured our how the Optima front could be attached. 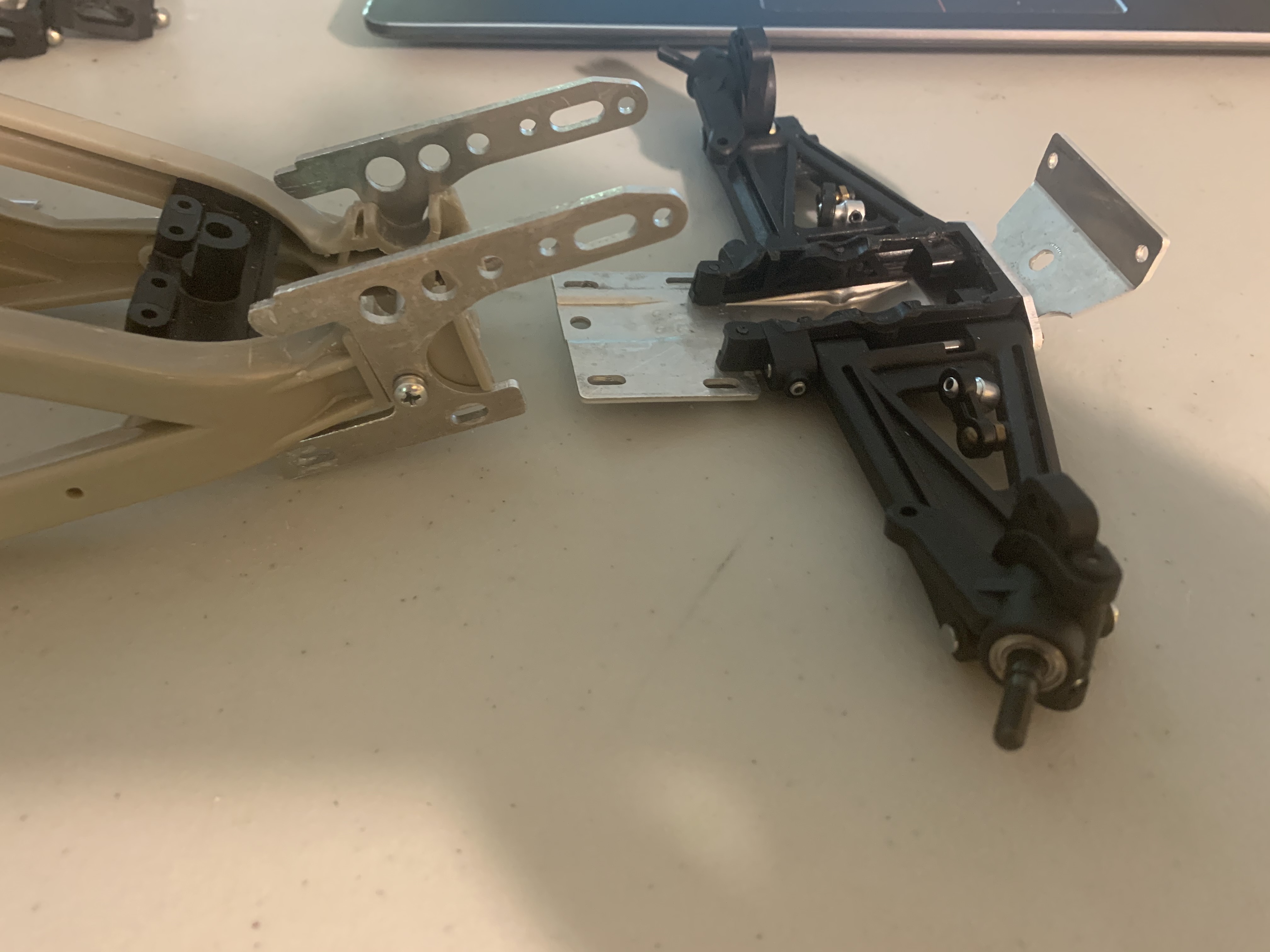 The front was a bit too pitched up, and it took some working to get it right. However, once I had it figured out, I extended the bottom aluminum plate to fasten to the front assembly, and ran some aluminum bands from the chassis to the top. It is solid as a rock, and lighter than it looks. 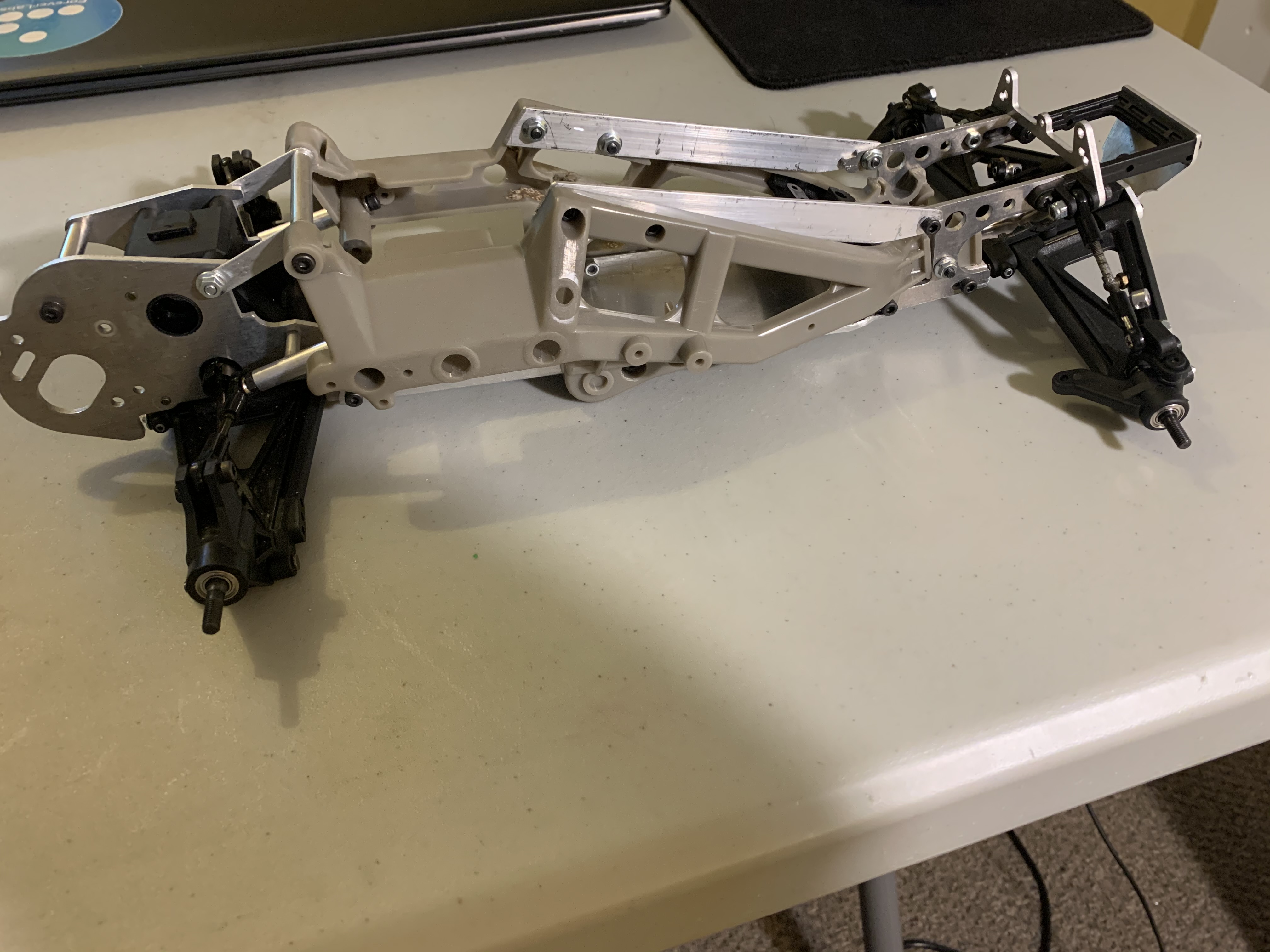 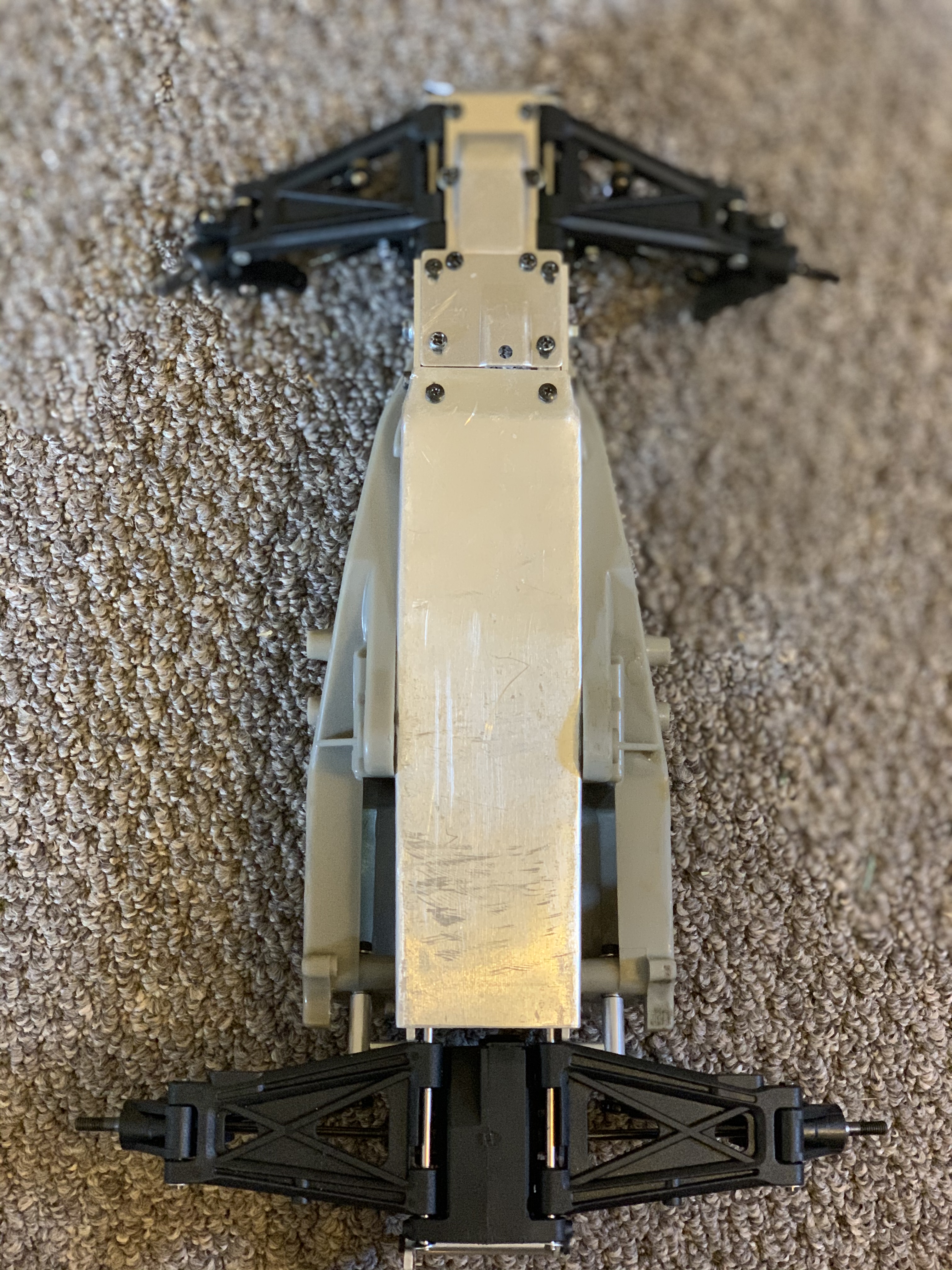 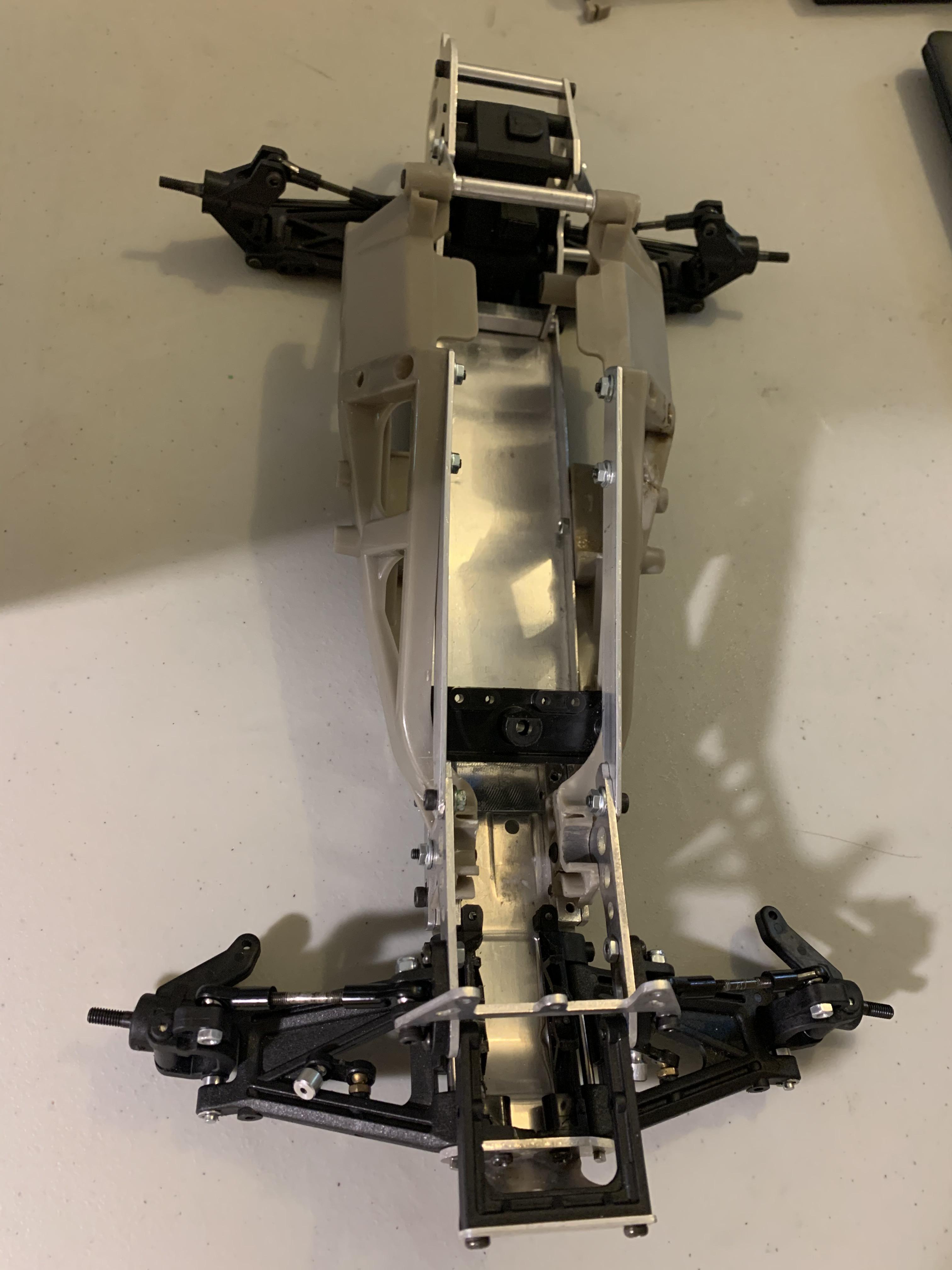 I think a black Frog chassis would look so good, that I am tempted to replace it with the black version which comes with the Subaru Brat, I think. However, I have some black Rit DyeMore, and I will see what effect that has.

The wheelbase is significantly longer than that of the humble Frog. The Frog has a 250mm wheelbase, whereas the Frogtima's is currently about 268mm. According to the ROAR Rulebook (yes I looked at official RC racing rules), the max for an off road 1/10 buggy is 292mm, so no issues there. I can actually extend it to 270mm by moving that spacer, and I might just do that. 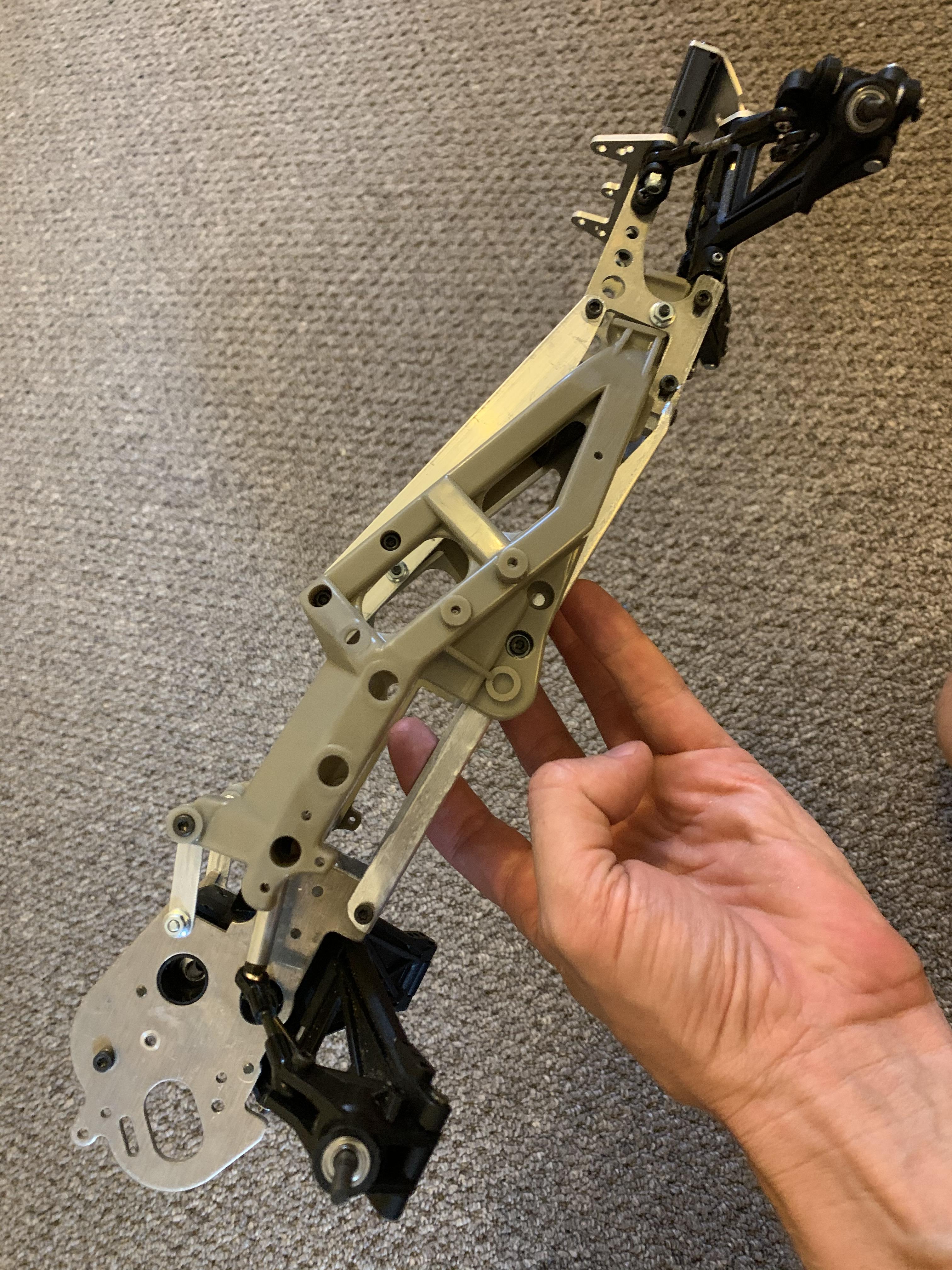 An odd beast. I'm really starting to like this Frogtima.

The next step is figuring out how I am going to get a servo into the front end. I am going to look into some smaller servos. I need a little one with sufficient torque.

After that I am going to figure out the shocks. I decided against using the old Optima Golds. Both for aesthetics, and because there is enough Optima in this thing already. I can use the front shock mounts as is, but am going to have to get creative with the rear shock mounts as I don't have any upper options atm.

I have thoroughly enjoyed these write-ups.. and have sent them to a few RC friends who LOVE THIS KIND OF STUFF

That’s awesome. It’s a lot of fun. It’s not only like erector set or legos, but there’s performance and durability to consider. It would be crazy cool if I could cut aluminum with software, or even if I had a drill press, but the challenge of doing it by hand is kinda cool too.