with graphs. graphs, i say

They're meaningless graphs, though, because nowhere does it analyze any source of revenue from anywhere other than advertising. Instead, it states that advertising is the only income for newspapers as if it were an unassailable maxim:

But you can also talk about newspapers as a specialised light manufacturing industry, that aggregated attention to sell advertising. There’s a common line about Google and Facebook that ‘if you’re not paying, you’re the product’, but this is pretty much what newspapers did: if you read old accounts for, say the New York Times Company, you can see that they were giving the product away at close to cost and making the money from selling your attention. 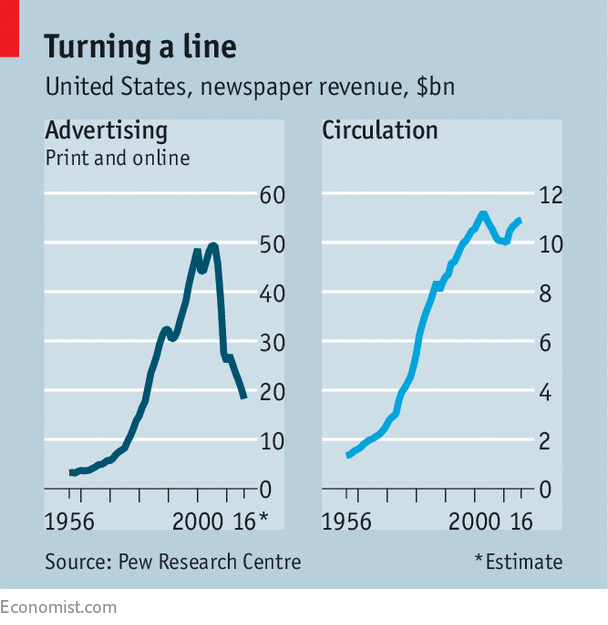 The overarching narrative thread of Ryan Holiday's Trust Me, I'm Lying was that the broadsheets of Yellow Journalism were defeated in the open markets by the New York Times that switched from a per-issue corner crier format to that of subscriptions:

Shortly after assuming control of the paper, Ochs coined the paper's slogan, "All The News That's Fit To Print". The slogan has appeared in the paper since September 1896, and has been printed in a box in the upper left hand corner of the front page since early 1897. The slogan was a jab at competing papers, such as Joseph Pulitzer's New York World and William Randolph Hearst's New York Journal, which were known for a lurid, sensationalist and often inaccurate reporting of facts and opinions, described by the end of the century as "yellow journalism". Under Ochs' guidance, aided by Carr Van Anda, The New York Times achieved international scope, circulation, and reputation; Sunday circulation went from under 9,000 in 1896 to 780,000 in 1934.

And further, that a subscription model would eventually beat out the corner crier format favored by the Huffington Post, Buzzfeed and the like. NSFWCorp ran the numbers; they made more money with a thousand people paying $10 a month than with ten million hits. Unfortunately, they couldn't come up with any news for $10 a month.

You can't talk about newspapers and advertising without acknowledging that there are other sources of revenue. For example, it's fair to say that Craigslist did as much damage to newspapers as Google did; I sold a number of cars through the Seattle Times and 25 words for a week was about $45, no pictures no nuthin'.