Now representing perhaps 38% of e-commerce in the U.S., Amazon continues to be the subject of much attention. In addition to paying workers to say nice things about the workplace, Amazon has expanded the fulfillment center tour program. We signed up to visit the Baltimore FC.

BWI2 is crowded among a string of East Coast fulfillment centers, strategically situated by the Port of Baltimore’s Seagirt Marine Terminal. Interstate 95 is 500 meters away, leading to Baltimore-Washington International Airport 15 miles distant. A rail yard adjacent to the FC completes the transportation network, with railcars in Prime livery parked outside.

This is a “sortable” FC, where products up to 18 inches are handled by a highly-automated process.

A crowd of about thirty gathered in a cold and somewhat dismal entry area, where safety and security posters provided an atmosphere somewhere between prison and airport. Through the security turnstiles we could see banks of lockers and more posters, including one prohibiting cell phones inside.

Our host, Ian, came out with three assistant “tour ambassadors” and gave us a cheerful welcome. They escorted us into a reception room where each seat had a set of radio headphones and an oblong package sealed with Amazon Prime shipping tape. These contained souvenir water bottles, and bringing a minor along entitled us to a toy delivery truck as well.

• 95% tuition reimbursement, since working in a warehouse is not the best long-term career path for everyone

• maybe something about natural light, but I only saw fluorescent tube lighting

I think there was more, but I was surprised that he did not mention the $15 minimum pay.

We put on our headphones and entered the floor, observing the “three points of contact” rule while climbing a stairway. We passed a poster showing counts of injuries written next to different body parts of a stick figure. I was tempted to break the rules and snap a photo, but my kid was already fussing, having dropped his radio, sending Amazon batteries flying. (Images below found online.)

Phoenix FC. The aesthetic we saw, but with an additional floor.

The tour followed a loop around the factory, so we saw things in random order, consistent with the “random stow” philosophy Amazon uses. I’ll try to recreate the life cycle of a product from entry to exit, the various steps designated by four-letter words.

We saw the receiving area from a distance. Shrink-wrapped pallets were lined up, and workers use pallet jacks to move them to a storage area or into the current inventory section, depending on anticipated demand.

Somehow the pallets are opened and the shipping boxes find their way to a stowing station, where one worker performs a highly-optimized task. 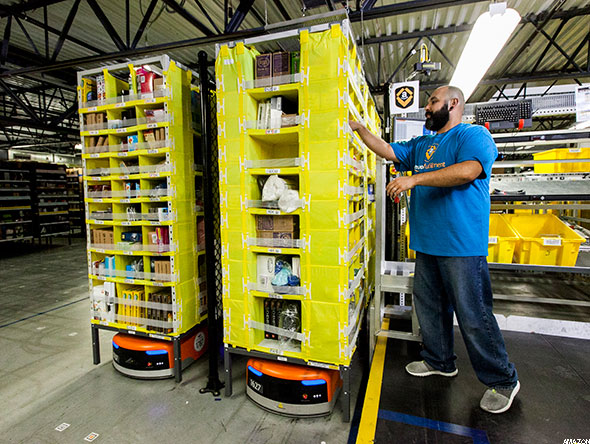 Kiva robots, now made by Amazon Robotics, bring the tall storage unit to the stowing station. Second and third shelving units might be lined up waiting, each with a robot parked underneath. The shelves were already loaded with merchandise, but had some empty space. The stower removes an individual product package from a shipping carton and scans it. A projector then paints pink rectangles over a few storage areas that are not recommended, perhaps because there are already similar products nearby that could confuse a picker later. A camera detects where the stower inserts each product (I think; I didn't notice any manual scanning).

I was at the back of our tour group, watching a fairly casual worker stow at what looked like a leisurely pace. He would remove a triangular cardboard box with a line drawing of a bicycle seat, scan and stow it, then repeat with a second box. A stepladder mounted on rails could be rolled in or out of position to reach the higher shelves. After each stow, a timer would restart on a touchscreen display, counting seconds upward with large white digits on a green background. While the stower casually walked a few steps to toss an empty shipping box into a large container, I watched to see when the background would turn yellow or red, but it never did. We continued past some unoccupied stations and I saw timers counting as much as five minutes, still with the green background. There is undoubtedly pressure to “make rate” but it wasn’t apparent how a worker would know if they are on track.

Three years ago, pickers might walk 10 or more miles a day retrieving products from endless lines of storage shelves.

This movement is now automated by the Kiva robots. We saw an area at least the size of a basketball court closed off to humans (possibly larger, and present on at least two floors). At one end, the shelving units were densely packed together, with one-robot-wide aisles threading between the stacks. Barcoded stickers were centered on each grid square of the floor, which was otherwise unmarked concrete. Robots moved shelves around at a walking pace, an AI somewhere solving logistical chess problems.

At the other end, closer to the stowing and picking stations, the space was more open, and the robots sped back and forth with their burdens. A collision on the perpendicular trajectories would be spectacular, but of course there were only near misses. I thought a product falling off a shelf could be quite disruptive, but saw only one packaged umbrella on the floor at the edge of the space.

The picking station was very similar to the stowing station. Robots brought storage units containing products needed to assemble an order down the line. Empty yellow bins (called totes) arrived on a conveyor, and the picker pulled them onto a lower conveyor, scanning a barcode on the bin. The projector painted a pulsing white rectangle over the area of the shelf containing the product, while the touchscreen with the same green timer displayed an image of the product, which looked like the image a customer sees. The picker would dig the item out of the shelving unit, scan it, and toss it in the bin, while the robots pulled the next storage unit into position. Once the bin was 50-75% full, it was sent on its way down the miles of conveyors.

The packing stations are also highly automated, with a human at the center performing a few repetitive tasks. 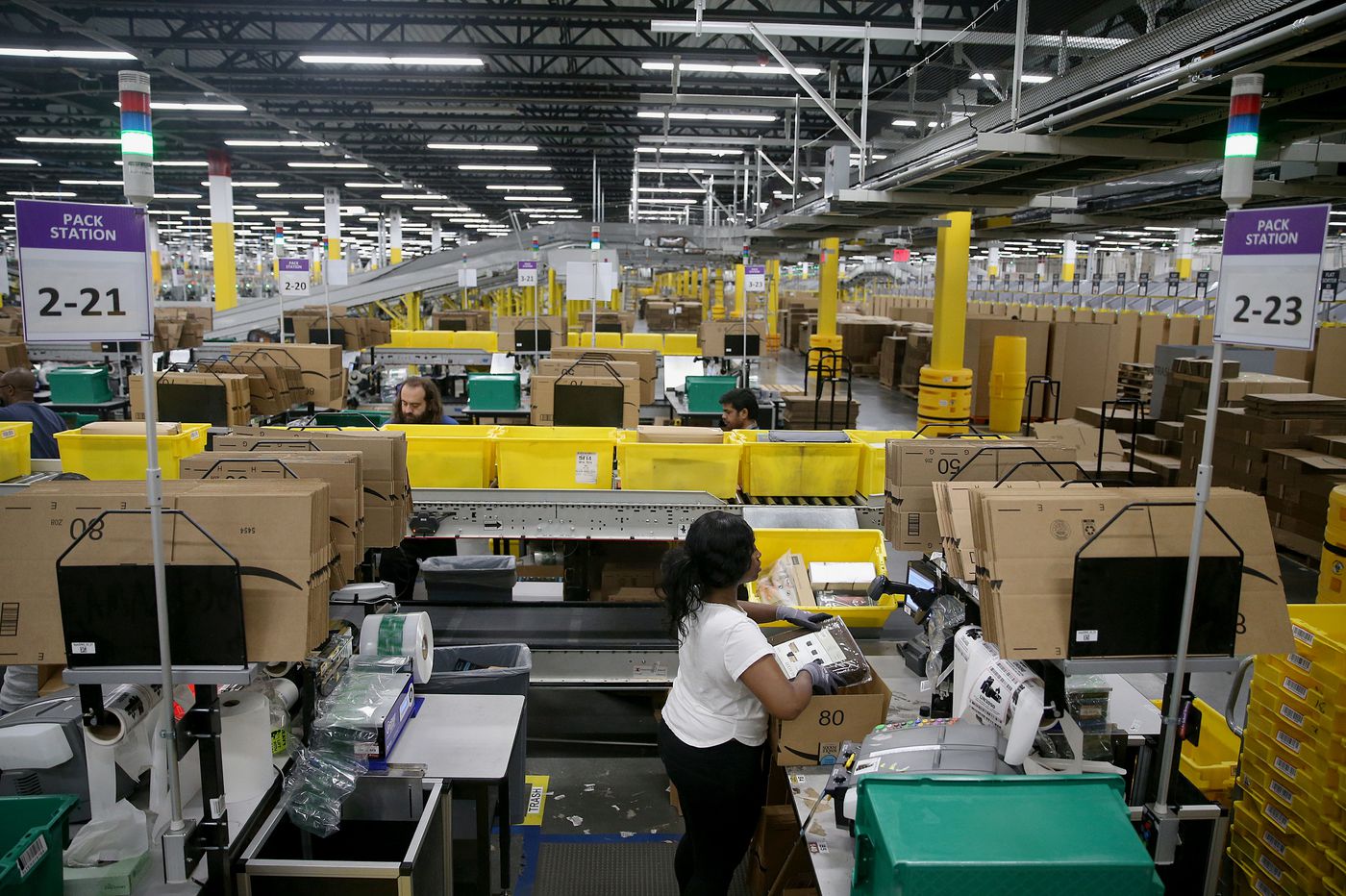 Loaded bins arrive on the conveyor, and a display tells the packer what size of box to use. A machine dispenses a strip of tape of the right length to seal the bottom of the box. The display indicates which items to put in the box, and the packer scans each one. Once the items are loaded, the packer adds as many Sealed Air cushions as they deem necessary and the tape machine dispenses another length to close the package. The air cushions are inflated on demand by a machine visible in the left of the photo. Another machine provides a small barcode label for the package, which is tossed onto another conveyor.

The environment is not painfully noisy, but too loud to enjoy casual conversation. 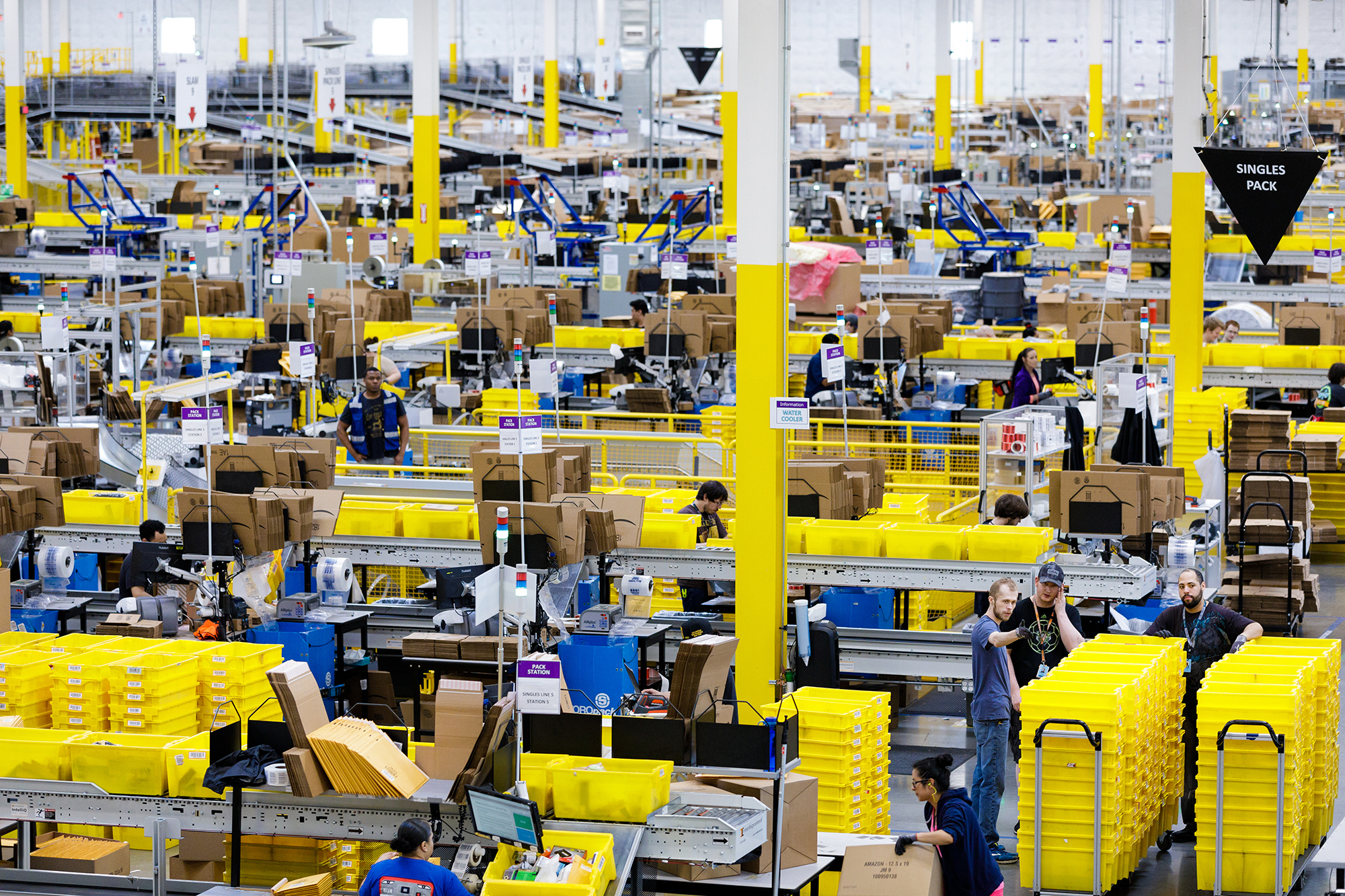 The last step to prepare for shipment is the automated Scan, Label, Apply, Manifest machine which weighs each package, determines which carrier will receive it, and gently drops a shipping label followed by a puff of air as the package slides by. It was surprising that these labels would stay in place at all, and there were many labels adhering to various slides and walls of the conveyors. While Ian was explaining this process, the conveyor suddenly halted and a shrill dump-truck-in-reverse alarm sounded. As the line of packages sat weirdly frozen, Ian continued explaining how the completed packages would get a final scan before leaving the facility. Finally someone asked what the beeping was about. He said a “problem solver” would be along shortly to sort it out.

Following the flow, the problem wasn’t hard to spot. Some packages get kicked out of the line after the SLAM machine when there is an issue with their weight or the label. These accumulate in a rolling laundry bin. The bin was full, and the little ramp leading to the bin had backed up, until a corner of the most recent problem box was blocking an electronic eye at the junction to the main line. It was tempting to reach over and give it a nudge, setting the engines of commerce back to life, but I remembered the warnings we were given, and the body part injury chart, and refrained.

After a minute or two, someone arrived to fix the jam and we continued back to the reception room to collect our water bottles. 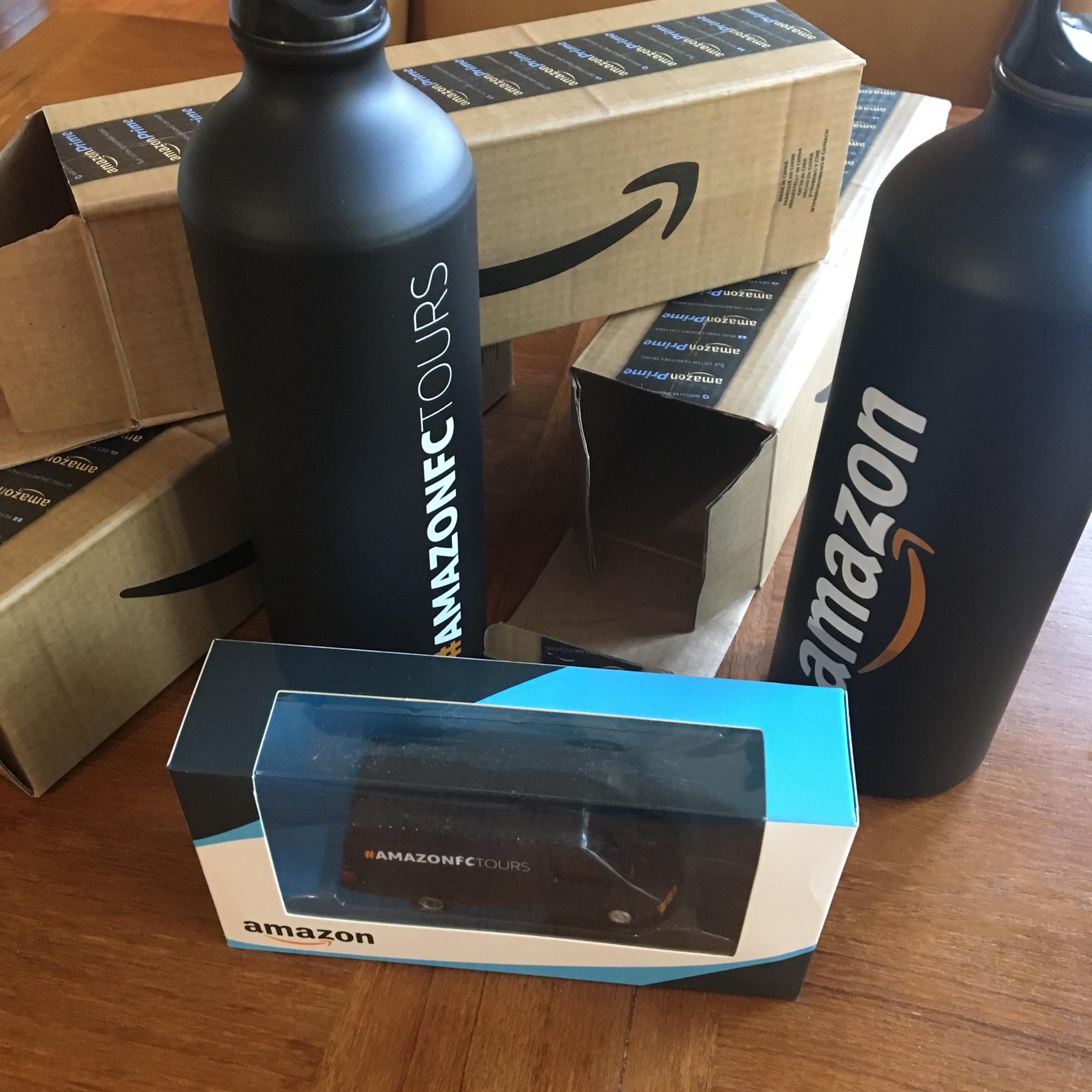 Loaded bins arrive on the conveyor, and a display tells the packer what size of box to use.

We just got a new watch battery for my daughter. The sliver of a battery package was in a 9" cube with air cushions. I'm surprised it is the most cost-effective approach. I wonder if it has more to do with being seen in delivery?

I have heard a theory that Amazon sometimes uses boxes strictly larger than necessary so they can be used to keep other boxes from sliding around during shipping.

LOL I just got $300 worth of watch lubricants. 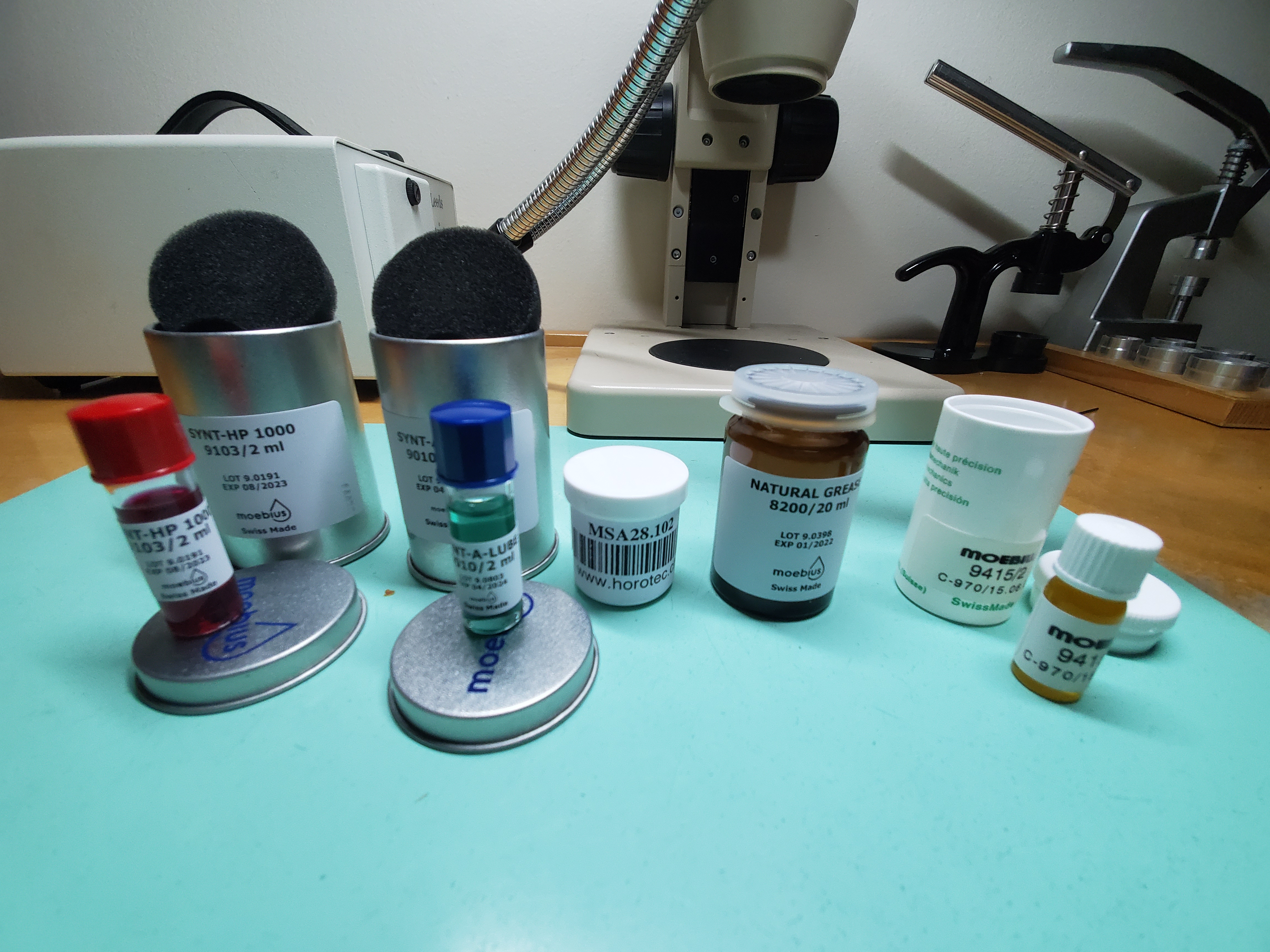 Packages, within packages, within packages. All this was within a box that was packed by a human so of course it was within a tiny flat rate box. But Amazon relies on conveyors and automation and those envelopes they use require an entirely different set of processes. For some reason Amazon stores their batteries in the "box" section of the warehouse as opposed to the "envelope" section of the warehouse so a box is what you get.

When I get watch batteries from Esslinger or CasKer they show up in padded mailers. When I get them from Amazon they're in boxes. It's the most cost-effective approach from a gestalt point of view because material handling is their profit margin. Meanwhile I ordered an adjustable height workbench from Home Depot that was damaged in shipping. I had to meticulously repack all the styrofoam and haul it back to Home Depot... but then they sent me another, all 150lbs of it, next day air AM from the opposite coast.

The costs of shipping have been completely buried by the externalities of logistics.

My last watch battery order came in a padded envelope. Perhaps the packer was out of envelopes and used the nearest substitute. If shipping is priced by weight it not make much difference.

I wonder if the added cardboard going to the landfill, now that many municipalities have given up on recycling, represents a net positive for carbon sequestration.

I would be surprised if the production of a cardboard box is carbon-negative.

edit: I had to look.

Some article suggesting cardboard is worse than plastic:

A site that says the CO2 emissions for cardboard generation is: 3.3 kg per kg:

Europeans really getting into the details:

Just saw this post because of a link, so sorry to revive a dead thread. But I've been thinking a lot recently about how whoever comes up with a logistically workable reusable shipping box system is going to make a fuckload of money once carbon cap and trade is a thing. Basically they'd be manufacturing CO2 credits. Tesla sells their ZeV credits to FCA and already makes a lot of money off it. It's going to be a growth business, but I thin it will take a shitload of capital up front, so probably only Amazon can pull it off.