This starts getting pretty interesting around paragraph 18, but the gist is that yellow is easy for us to identify but hard to communicate, and that we're not so great at expressing green either. The way we perceive color seems to boil down to whether our brains "discount" warm or cool colors in our perception, or so the theory goes.

My colleague Julie Beck summed up the ordeal with a sentiment we could all agree with. “It is truly horrifying every time it gets pointed out that we’re all walking around thinking we share the same reality,” she said. “And we just are not.”

I have taken three days of training in color theory at Dolby. I have also completed a couple meaningless certifications in video color. I am also partially blue-green colorblind which is why this whole qualia of color thing is tiresome to me rather than illuminative.

The thing you need to understand about human vision is it is (A) lossy (B) comparative (C) heavily reliant on DSP. Take the worst skype call you've ever been on. Make it worse. Now recognize that this is the way you actually see the world, your brain just does an amazing job of tricking you into thinking you see it perfectly. That's the entire field of optical illusions, magic and motion pictures in a nutshell.

If you ask Pantone what "green" is they'll give you color chips. If you could ask the human visual cortex, it would say "compared to what?" Is it yanny or laurel? Well, depends on how much time you've spent listening to shitty codecs overcoming the awfulness of digital compression. Is the dress gold/white or blue/black? Well, depends on how much time you've spent watching shitty compression artifacts. Our ears develop the ability to hear through accents, our eyes develop the ability to see through distortion. Measure it and you'll get an answer. Measure it the right way you'll get an answer that agrees with your prejudices.

Here's the measured reflectance off a tennis ball. 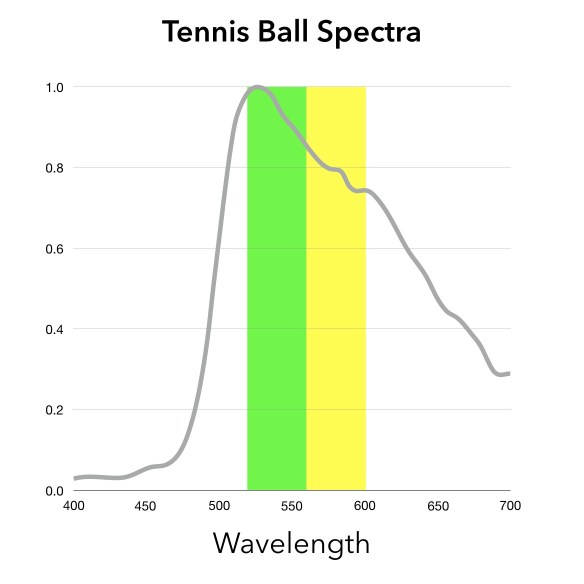 Now - let's acknowledge that "green" and "yellow" are arbitrary lines drawn in the sand and that most people define colors in terms of other colors. Let's also pause to note that tennis balls are fluorescent which means they absorb light in one color and emit it in another of a longer wavelength - and green is longer in wavelength than yellow. Let's further note that a fluorescent tennis ball is emitting different light at night than it is during the day, looks different under daylight than it does under metal halides, looks different reflecting the green paint of your local rec center than the clay of the French Open than the grass of Wimbledon.

What we really care about is gamut. That's a long-ass Wikipedia article with more than its fair share of animations but to cut to the chase, "color" as a scientific concept is a whole lot bigger than "color" as a perception. Displays are scientifically described by their ability to reproduce gamut - the "color space" of a reproduction technology describes what colors it can and cannot reproduce, those colors being determined by Planck's Law which determines black body radiation. When you were a kid you learned that the primary colors are blue, yellow and red. If you made it to physics with calculus you learned that the primary colors are actually red, green and blue. If you got into graphic design you learned that the primary colors are really cyan, magenta, yellow and black. All three answers are correct for different color spaces and different gamuts. One of the reasons I'm "klein blue" is that International Klein Blue is outside the gamut of any broadcast or printing technology. You can't see it unless you see the real thing. And the real thing is so fucking metaphysical that I stared at a blue canvas for twenty minutes. Because I might be partially blue-green colorblind, but that part of the gamut? I can fucking see that.

Gamut matters. Here's a tennis ball in the gamut of Rec. 709, the color gamut used by ATSC, the broadcast standard of American HDTV. 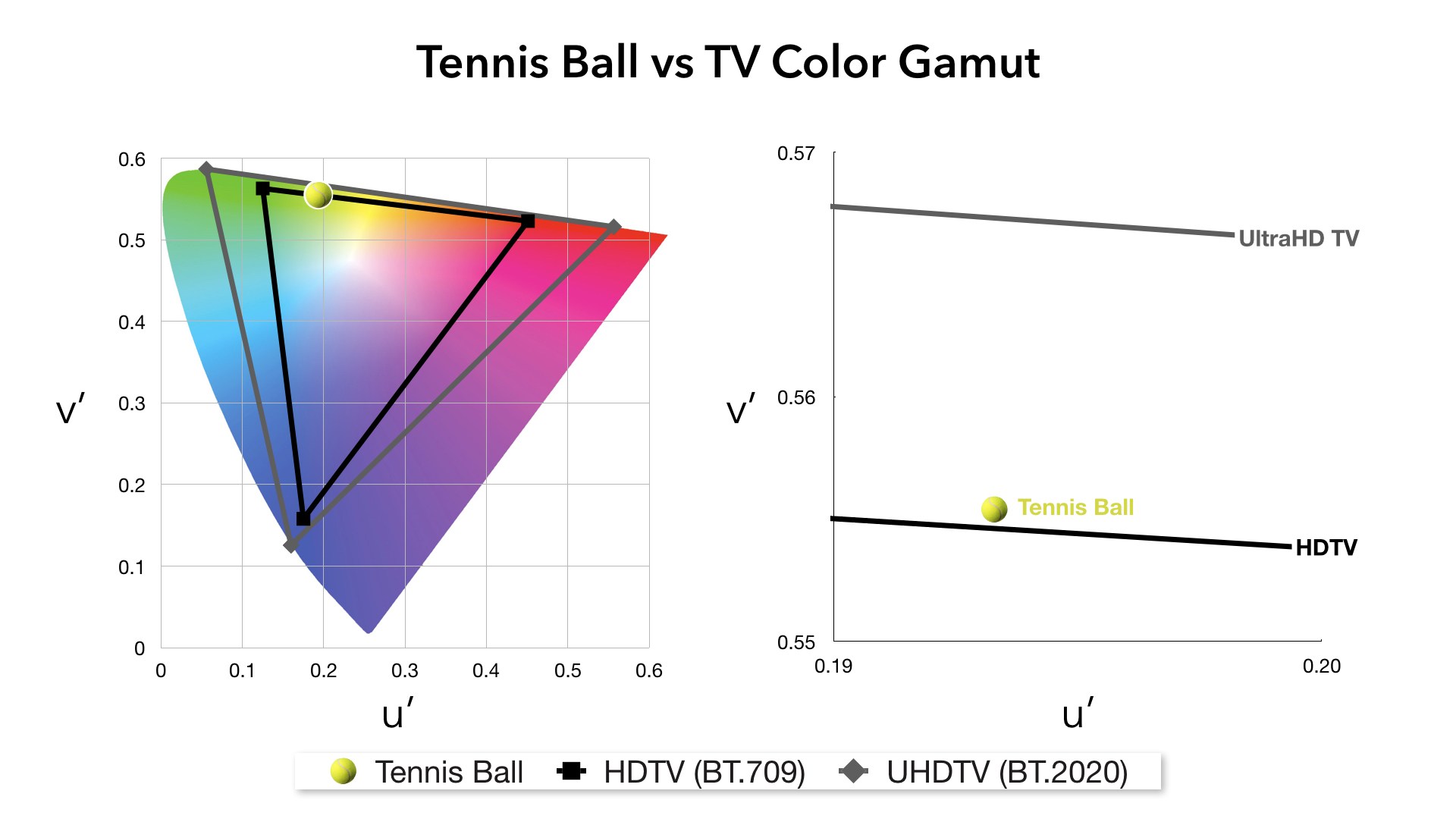 HDTV cannot accurately reproduce the color of a tennis ball. If you're used to seeing tennis balls on TV, you're not seeing them as they appear, you're seeing them the best your TV can try. It's like hearing something with a headcold. No, it's not actually that muffled, it's just that your ears are stuffed up. No, it's not actually green, it's that your TV has no ability to see or show that color. If you're used to seeing tennis balls in real life -

Well, let's pretend you're Roger Federer. You probably see tennis balls that have never been used before and will never be used again. They're half an hour from the can being popped and are so fresh they make your jersey shine a little chartreuse.

Go do a google image search on "tennis ball." What color is that? No need to say it aloud. Now open another tab and search for "old tennis ball."

Can we agree that one of them is greener without arguing about whether they're yellow or green?

So. What color is a tennis ball? Which tennis ball and compared to what? What the fuck does "green" mean, anyway? Tell me what gamut you mean and I'll give you an answer. This isn't a void to stare into, it's an acknowledgement that what we "see" varies as much as the way we see it.

I was an audiovisual consultant once. At the time there were two gigantic projector manufacturers, both large and foreign. One was Christie, a British company. The other was Barco out of Belgium. They were both competing for Coca Cola's business - every projector in every office. Coca Cola was primarily interested in how well these two companies could render the red of Coca Cola brand communications.

Christie showed a color that matched the notepads on the conference table. Barco argued gamut and the perception of color. Christie won the bid. Christie understood that they needed to be red compared to that particular red in that particular room. Barco went "like, what's, like, green mean anyway, maaaaaan?"

It means a spectral peak at 525nm.

Which, scientifically, means everything from green to damn near gold.