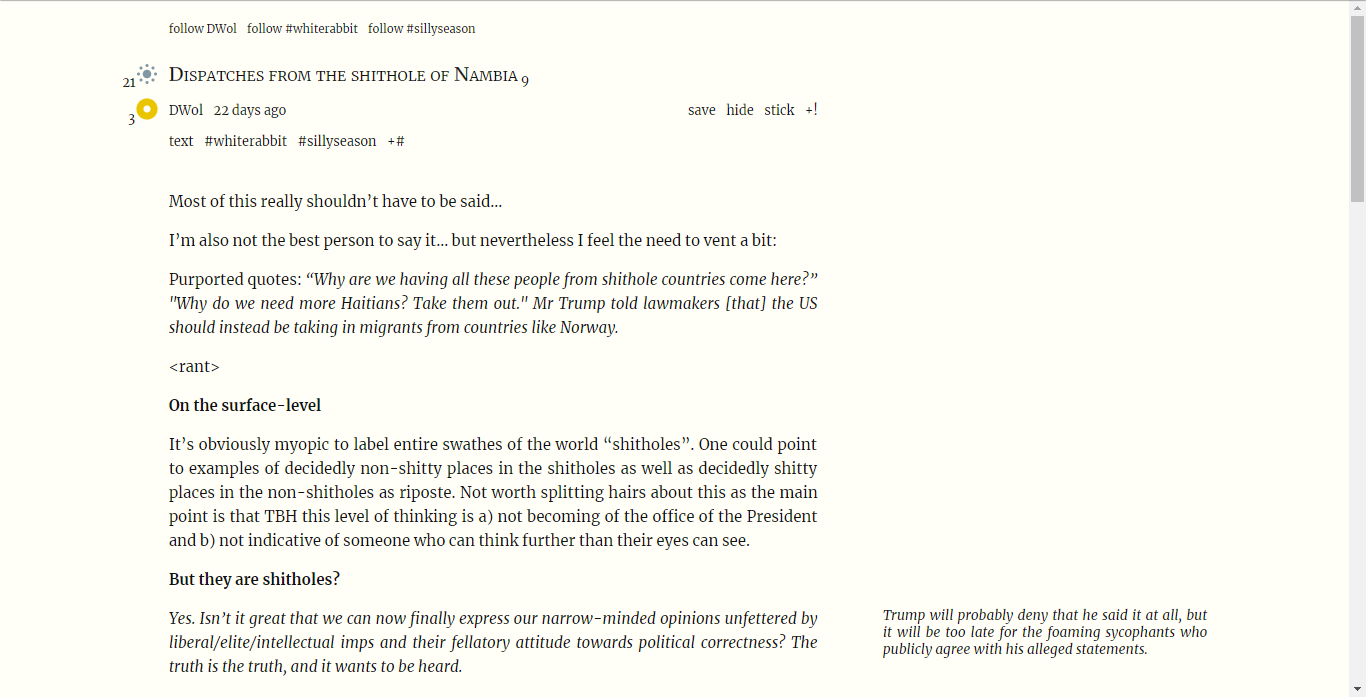 Tufte CSS seemed a good addition to Hubski, so I went on to experiment with the design. The main feature of Tufte CSS' markup is the sidenotes and margin notes. Check out the latter (with a bit of styling, made from DWol's parethesis comments): 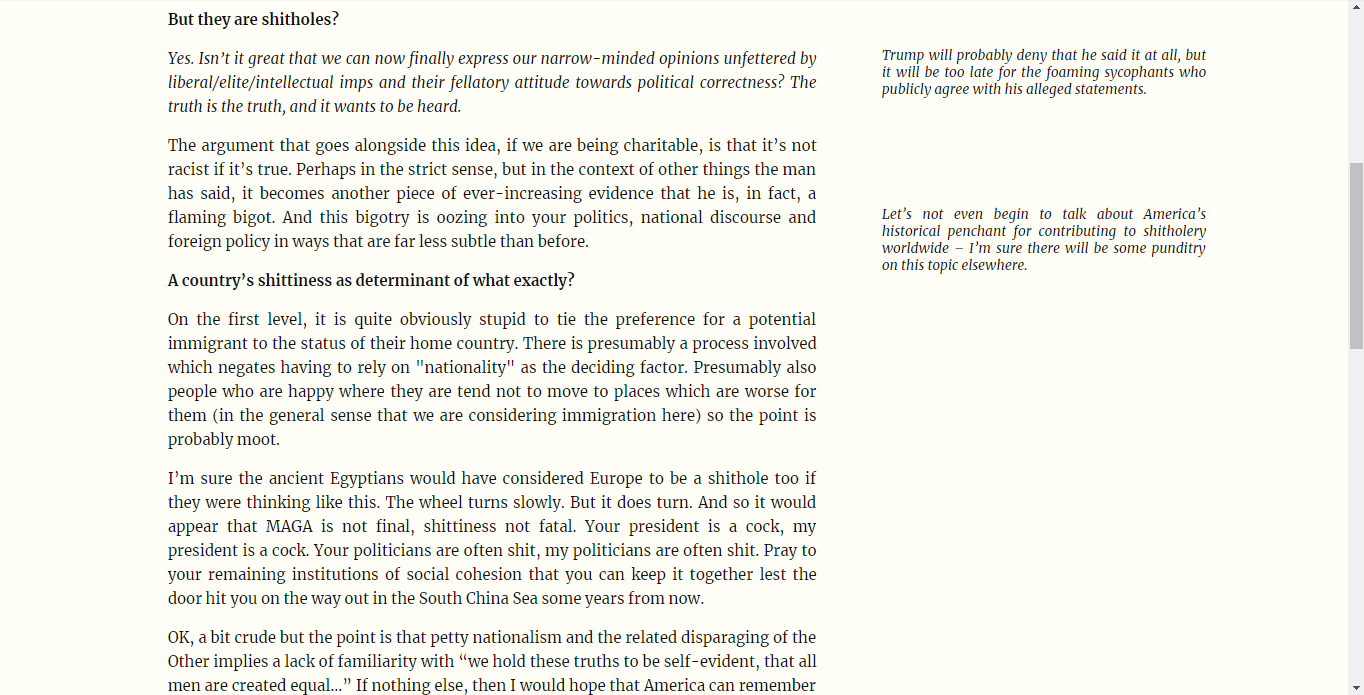 Overall, it's a concise design, following the philosophy behind what Hubski currently shows. It gives the post a clean, thoughtful look without distracting the user. Tufte CSS also makes all images and inline videos responsive by default.

Under the hood, there are some changes to the HTML structure of the parts shown: redundant elements removed, some class names changed (like removing the dash and the number from all `cdot` circles), some CSS optimization done (like showing `cdot`s per number of votes). I've talked to mk about optimizing Hubski's HTML before but had no reply. It's okay: I know mk's a busy man — which is why I offered to do the spring cleaning myself.

Feel free to check out the codepen itself: it contains a number of CSS experiments that could also be introduced into Hubski's design, either directly or as a separate theme. Like... 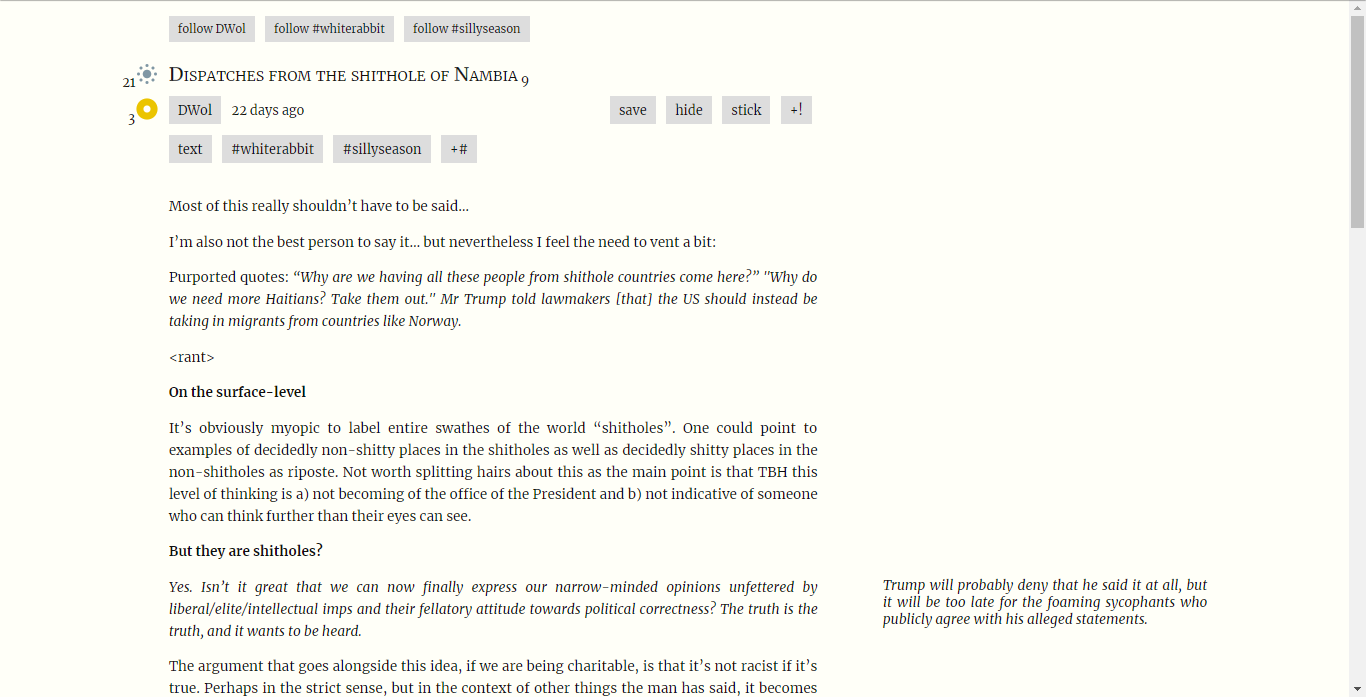 It is true. I am buried atm. I get to Hubski work intermittently, and have a priority list. CSS spring cleaning is lower on it. That said, I’d use this. It’d be a great style option.

Is there a way we could submit some alternative CSS layouts?

Seriously. Post the source code to Github (I've discovered recently that it already has a repo for bug reports and feature requests). I'll give you decent pull requests to consider once you're ready to give this a thought. Maybe outsource the job to someone on the Hubski "staff"?

it would require meddling with the Hubski's markup engine, no?

It would require setting up additional markup, yes. Considering Hubski already having custom markup system (there's no other place that uses plus symbols for embolding the text), it shouldn't be a problem.

I suggest something simple using parentheses. For example,

Not sure if it would work as well with comments as it does with posts.

Preliminary thinking says the comments could have inline note in separate paragraphs aligned the opposite of the main text (to the right if you're anywhere other than the Arab or Israeli states). Also possible to shorten the comments themselves to, let's say, 400px (which is me eyeballing it to be 50 to 60 symbols at current font size, giving it the optimal reading performance), which would give sidenotes and margin notes some space.

the only way for me to help is to break it.

Destructive criticism is a valid strategy if used to lead to building of something better. I appreciate you pointing the details out.

I have an idea or two about how to reduce comment clutter in big comment sections. I'll see if I can make them work.