I know I'm not so active around here these days, but I thought some of you (especially thenewgreen) would be interested in what's going on at the moment.

So, on Sunday morning, I'm setting off on a 2,000 kilometre (about 1200 miles) barefoot trek around Ireland, in a twofold attempt to get the Guinness World Record for longest barefoot journey, and to raise money for Pieta House (an Irish organisation who help people suffering from suicidal ideation and self-harm).

I'm going to start at my hometown of Claremorris in Co. Mayo (in the west of Ireland) before heading south and wrapping around the outside of the island, walking in a giant loop back around to where I began. I'll be camping mostly, except where friends are taking me in. Here's a pic of the route: 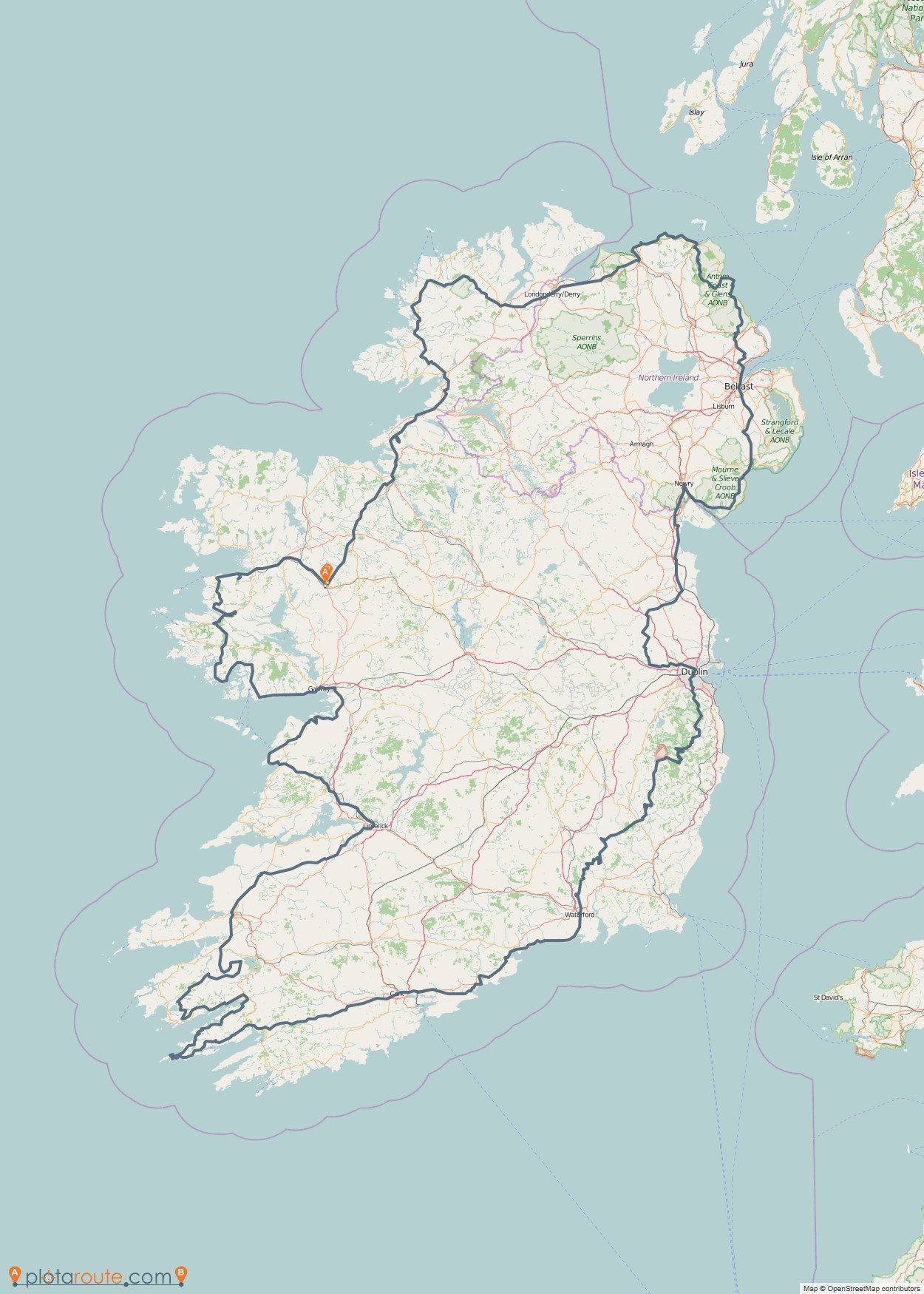 I've actually recently been featured in a national paper, and had a few national radio stations (and even an Irish TV show) ask me about interviews, so literally in the last few days it's blown up a lot. I never expected this much attention.

The GWR guidelines are pretty strict - I need a log book, witness statements, photos and videos, GPS files... The current record is 1488.09km, so I'm trying to beat it by about 500 kilometres. I hope to do it in 3 months; my housemates' wedding is on August 4th in Dublin, so I need to be back for that.

Anyway, I just wanted to share this with the Hubski people. I'll try to post updates here from time to time, and hopefully a mega-post at the end.

Here's a link to the Facebook page for the curious.

Post a photo-a-day of your feet. We'll then do a time lapse and see the horror as it unfolds...

(I have really wussy feet. So MUCH RESPECT to you and your tootsies! I hope they survive and continue to serve you well after your journey!)

Whoa! That's such a good idea! I hope so too - the current record holder told me his were bleeding every night by the end.

All I want from this are before and after pictures of your bottom of your feet. That said, best of look! And may you collect a lot of money for your charity!

Thanks! I hope so too - it really is for a good cause.

Good luck! It makes me happy that someone in a far corner of the world is doing this.

Thanks! The Lord of the Rings vibe of this trek is pretty nice. If only I had some evil jewellery...

Best of luck to you.

Do you know much about the current record holder? Have you studied his/her approach so you may get a 'foot or two' advantage? Terrible attempt to be funny, but just hoping to make you a "little lighter on your feet" or "add some spring to your step"! Maybe fellow hubskier's could help"lighten your load" with periodic posts of horrible foot travel puns. I'll be happy to help.

You are planning some Hubski updates along the way aren't you? You could incorporate a World record for most Hubski stickers posted on a circumnavigation of Ireland at the same time.

Have a great time.

Haha, those puns are dreadful!

Actually the current record holder added me on Facebook and I have two reasons to think I might be succesful: he apparently did no barefoot training beforehand at all, and the German summer partially melted the roads, destroying his feet.

I'll definitely try to make Hubski updates but I don't yet know how frequently that'll be possible. And yeah, gonna grab some of the stickers I have. ;)

Good luck and awesome charity! Is the best way to donate through the link on the Facebook page or via the charity's website?

Thanks! :) The best way to donate would be through the link given on the FB page, yeah. Any support would be much appreciated! :)

I'll donate tonight when I get home! That will help me not feel guilty when I make a post about participating in 46 Climbs this fall. They do charity hikes to raise money, also for suicide prevention. I don't donate very frequently, but your charity looks fantastic. Best wishes for your trek! I'm sure you've made positive impacts before you've even headed out. :)

Brilliant! I'll take some liberties with the old saying:

May the road rise up to meet you.

May the wind be always at your back.

May the sun shine warm upon your face

May the ground be soft upon your foot pads

May your arches and toes bear you up

May your journey be safe.

Well hey, thanks for a new twist on an old blessing! I'll keep it with me to keep me warm.

This is awesome, I wish you the best of luck and if you ever make it over to South West England afterwards, you're always welcome for dinner.

The real challenge here will be not singing the Lord of the Rings and The Hobbit theme songs constantly. ;)

Thanks! I already have the Bilbo/Frodo/Shire theme (not sure which it is but I'm sure you know what I mean) playing in my head. :)

I look forward to the post adventure #tripreport! Enjoy every moment my friend!!

Will do! Hopefully I will be able to post some elaborate maps of my journey at the end.

(I've also got to give up cigarettes if I'm going to make it... For now, I'll be a closet smoker.)

Dude. "I'm Sorry," you have to give up smoking, but you'll end up a New Kind of you, you're Bigger than it. I Almost forgot to mention that you should realize that as you Grow Up the opportunities to do these types of things wanes. But right now you remain the King of your Castle. Pack well, put it All in its Place and be sure to meet lots of Idiot Strangers along the way.

That is incredibly awesome! Best of luck. I am very jealous as it sounds like a great adventure.

22 kms a day sounds manageable. But doing that for 90 days straight, you know you will have days, or for me it would be mornings, where you just have to power through.

Have you been in contact with the people at Guinness? Have they approved the attempt and the record keeping requirements? In my experience it is arduous to get them to officially recognize a record (unless you pay them to have a representative witness it) and they have to pre-approve everything. It took me about 18 months or something and lots of negotiation to get recognition for an act that was clearly a record. I would hate to see you not be recognized over some paper work problem or miscommunication.

But regardless, even if you do not get a record, raising awareness and money for a worthy cause is a great thing to do.

lots of negotiation to get recognition for an act that was clearly a record.

uh... is this story posted somewhere we can read?

Not really. This article touches on it though. What it does not touch upon is the fact that GWR first simply would not respond to me, then we had to work out the record definition, then work out the method for verifying the record (which was the hardest part as it was a lot more complicated than just measuring the size of one's foot or something), then we had to complete lots of paperwork for the application, then present them with the evidence and hope they would OK it.

Yep! I've had an application up since last year and I've been getting some minor clarifications over the past few months. Since it's already an established record, I guess they already have all of the guidelines set, which makes my life a little easier.