When I first learned of the Monty Hall problem in an undergrad Discrete class, I wrote a program to simulate it. It was pretty easy to see it's statistically correct, at least.

You'd think those PhDs would have at least tried it a few times, to see if it appeared correct in practice, before writing a signed letter to a magazine.

But many people tried performing similar experiments on computers, fearlessly programming them in hundreds of different ways. Not surprisingly, they fared a little less well.

Kinda surprises me. My app was 50 (non-boilerplate) lines of Java. If you can't write an app to demonstrate 3 simple logic rules, which a university sophomore can (did) in an hour, I uh, hope you don't make a career out of it.

There are two necessary assumptions in the problem that one might overlook when programming a simulator. It is critical that (1) the host knows where the prize is and (2) never opens that door. The original language didn't make the second assumption absolutely clear. 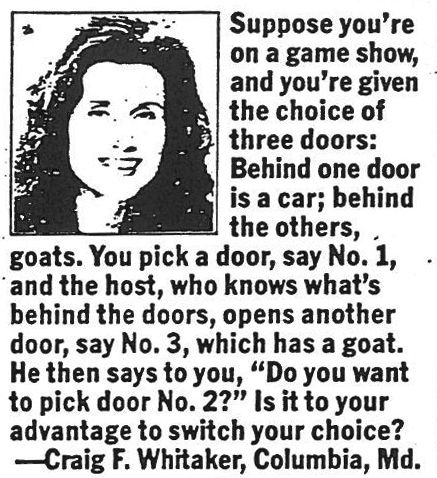 So the simulator might make everything random and simply ignore cases in which the door with the prize is opened by the host, giving the player the choice of two wrong doors. If the host knows where the prize is, but still opens one door at random, and it happens to reveal a goat, the remaining doors each have a 50% chance of hiding the car.

But I agree that hubris among PhDs was a contributing factor. I got suckered into the wrong answer too, and the standard tactic of going to extremes with a million doors helped me see the light.

Yeah, her article glosses over that. I also didn't mean to be condescending to hobbyists. She doesn't say how many of her programmer writers were professionals versus amateurs. Nothing wrong with doing it wrong if you're learning to code. That's how you learn.

I should mention, I learned about it in Discrete Math in the context of how foreknowledge affects results. So I knew what made the difference going in; it was just a matter of grasping why.

... I can't believe the people who think that she is incorrect. Like, this thing even has a name, it's called the Monty Hall Problem

I can't remember where I stumbled upon this but apparently this problem (which my mom had me and my brother experiment in 1995 or 1996) used to be much less popular. Keep in mind, this article was written in 1990.

Still fascinating from a vast number of angles.

You also have to consider the crablouse in its native environment. We're talking Parade Magazine here, that little flyer with the easy crosswords, softball interviews and recipes involving Miracle Whip that you get if your hometown paper weren't willing to spring for USA Weekend. There's nothing hard, there's nothing thought provoking and there's nothing controversial in Parade... except the Monty Hall Problem, and the rainstorm problem, which MvS attacked a couple years later and which was not resolved as succinctly in her favor.

Finally, here's how MvS decided to explain one of the stickiest and least-intuitive aspects of statistics to the unsophisticated audience of Parade:

Yes; you should switch. The first door has a 1/3 chance of winning, but the second door has a 2/3 chance. Here’s a good way to visualize what happened. Suppose there are a million doors, and you pick door #1. Then the host, who knows what’s behind the doors and will always avoid the one with the prize, opens them all except door #777,777. You’d switch to that door pretty fast, wouldn’t you?

Does that clarify things? or make them muddier? Or muddier and condescending?

MvS could have blown the entire column explaining why statistics are tricky and how obvious answers are sometimes wrong. She didn't. She snarked. And as a result, she spent the next six months putting out brushfires and trickling the answer out at a pace that made it so nobody remembered the original beef or why it was so controversial.

People hold this event up as an example of why people are stupid, rather than an example of why statistics are complex, why our intuitive understanding of statistics is often wrong and why a better understanding of the underlying problems often requires more effort than people are willing to put into it. Had MvS written "we never found the WMD" in parade in 2004, the responses would have been just as heated, just as self-assured, and just as wrong.

To be fair, it had become a textbook problem by the time I was studying probability, and I'm not sure I could give an adequate explanation without saying "Bayes theorem".

Sure. But you didn't write a column for Parade, either. There's "math" and there's "math education" and if your regular audience is the guys and girls who mostly glance at your writing on their way towards finding Hidden Valley Ranch coupons, "Bayes theorem, you fools" is doing no justice to your readers.

She's on the back page next to the horoscopes, FFS.

Interesting why folks will cling so tenaciously to incorrect ideas. Anyone read "Thinking, Fast and Slow" by Amos Tversky and Daniel Kahneman? I read a good portion of it last fall. I've gotta imagine that the ability of the Game Show problem to stump PHD's is a result of some form of common cognitive bias. I don't have the time to look it up right now, but I'd figure that Tversky and Kahneman may have something to say about it as well.

My best guess is pride in two different ways. First it leads to arrogance, which is when someone boldly claims that they are correct and the other person is an idiot. Second, that person will try to protect their pride by working to remain ignorant of the fact that said "idiot" is actually correct. People spend a lot of energy protecting their ego and pride by doing things that don't make sense.

Dan is a real peach.