This is the fifth State of Hubski. Let's do something we haven't before: 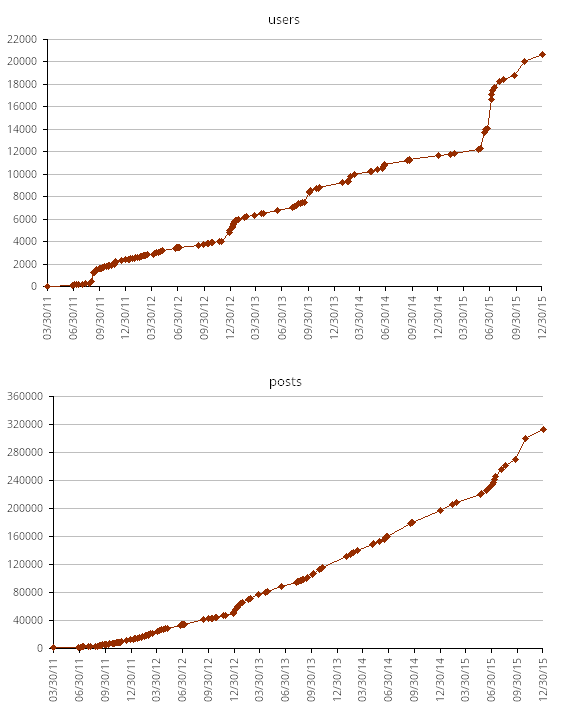 Perhaps we should do this every year.

Yesterday thenewgreen posted a summary of 2015 which you should listen to.

tng's summary does a fine job of addressing my thoughts and feelings regarding what has happened in the community over the past year. It is no exaggeration to say that this place has enabled friendships that I could not have had otherwise.

Five years ago, I had an inclination that a rare kind of space could exist on the internet, and that anyone could be a part of it. You all have proved that possible. I am constantly surprised by what people bring to this site, and the conversations and collaborations that result.

From a technical standpoint, one of the most significant things that happened this year is that rob05c joined the team. As #devski indicates, good things are afoot. Reading over previous State of Hubski posts, I realized that we have been promising an API for about 4 years. To be honest, I made some mistakes in the last two of years that resulted in significant development delays. Specifically, in 2014 we embarked upon a rewrite of the site that was too ambitious for our team's part-time capacity. As a result, forwardslash and insomniasexx spent much time and effort on work that you never got to see. This was a painful experience. In 2015, we corrected our course, and forwardslash and insomniasexx didn't kill me.

More generally speaking, we have learned a lot in this past five years, and IMO 2015 has found us on firmer footing. Hubski is growing up. Questions have been answered. It has become increasingly clear what this corner of the internet is all about.

That's not to say that we aren't going to be experimenting. Hubski is always a work in progress, and there are changes in store for 2016.

On that note, forwardslash has a New Year's gift for you all: https://hubski.com/irc

Thanks for being part of Hubski in 2015. You make this place what it is.

The State of Hubski is good this New Years Eve of 2015. 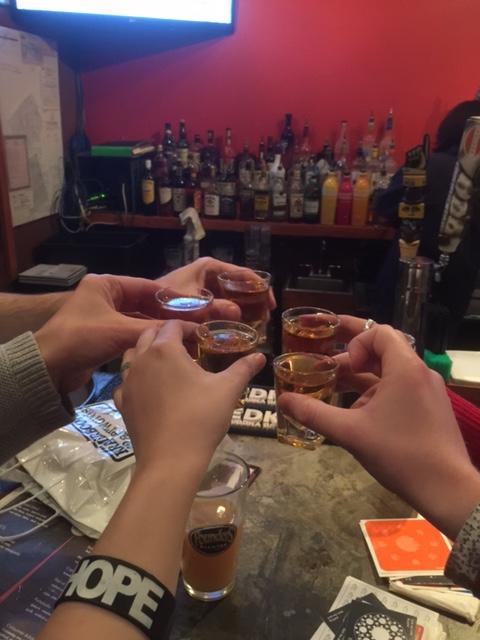 So I went and put together the Best of Hubski list.

I am sure I missed some, so feel free to add to it in replies below.

Back to the Future, Time Travel, and the Secret History of the 1980s

Lecture 17: Fun With the Anthropic Principle

Personality Insights about You Delivered by IBM's Watson

“Picture yourself as a stereotypical male”

The Billionaire’s Typewriter: The Battle Between Medium and Publishing Freedom

The End of Dating: Tinder and Hook Up Culture

The exemplary narcissism of Snoopy

The Hunt for the Death Valley Germans - Tom Mahood, otherhand.org

The Lonely End: In aging Japan, thousands die alone and unnoticed every year.

The Web We Have to Save

Why America’s obsession with STEM education is dangerous

20 years from now what will you have wish you had done?

What Kendrick Lamar, Drake, and Kanye West Say About the Black Experience in America

What is the Dark and How Do We Push It Back? by lil

Why Rape Is Sincerely Hilarious

Why She Slept With You: The Unapologetic Cheater

Your job will never love you.

Best Comments / Text Based Posts of 2015

AnSionnachRua on our internet personalities

Complexity on does amazing Grubski

Cumol: The one state solution

francopoli on the shittiness of science reporting

insomniasexx on readings on what to do with your life

insomniasexx: One year & two weeks ago today, I put in my two weeks notice with no real plan in place.

mk on freedom of discussion

mk on why the social aggregator is a terrible business model

_refugee_ on not leaving home

rd95 on the Paris Attacks

steve: The China My Father Knew is Gone

tacocat: Art and narrative, by me

tacocat: I love Bruce Springsteen and so should you - OC and long playlist

thenewgreen on racial preference and exclusion

First Close-Up Photos of Pluto Are Released by NASA

demure: So I made it to Carnegie Hall

mk: PSA: Starting the search for the next Hubski team member

I'll raise the point again that this and /bo14 etc need their own link somewhere on the site or else they cannot fulfill their primary purpose.

Yup. mk is already partying so well do it in there am. Or post hangover. Happy new year!

Hahahaha, happy new year insom. Have one or six for me, I just got off work and it's ten degrees here.

Will this get it's own post, or just be here?

Currently drinking a coffee in cgods shop. It's nice. The coffee is good. There's a line now.

cgod have you gone the 'put for-sale art on the walls thus giving your place atmosphere and providing a display space for broke artists' route yet?

Yup, there is art for sale on my wall.

I hope to have different kinds of stuff up over time.

I'd like to do an all crayon show and a kid art show.

Found it, it was this.

Shorthand service commands (`/ns` and `/cs` instead of `/msg NickServ` and `/msg ChanServ`) would be nice to have. HostServ would also be appreciated for hostmask requests since my IP doesn't seem to be obfuscated.

On that note, forwardslash has a New Year's gift for you all: https://hubski.com/irc

Sure, though mk: Heads up, it looks like the kiwii scripts are blocked by browsers when visiting HTTPS Hubski:

I found the address anyways in the source though: #hubski @ irc.hubski.com:6697 (port 6667 seems to be the magic number for lambda...)

How are the users in the first image counted? Do we really have over 20,000 users?

That's accounts. We probably have 500 spam accounts in there but the rest are signups.

We don't track active users in any way.

That's pretty phenomenal. Bigger than I thought. Glad to see that, and always glad to hear about the tracking.