I love how Team Business is writing this shit up:

The appetite for change by employees indicates many professionals are feeling confident about jumping ship for better prospects, despite elevated unemployment rates.

Hey, what does that actually look like? Exactly one paragraph later?

In March 2020, Edward Moses was hired as an information-technology specialist at a software company, believing he would be part of a team supporting colleagues in four U.S. offices. Instead, after a round of layoffs, he found the team had one member, and he was it. “It was effectively me against the help-desk queue,” the 37-year-old said.

Ain't nobody running the headline

Like, look at this shit.. "Leisure and Hospitality Wages Are Soaring. It’s the Economy Returning to Normal." Wanna see the graph that came with that article, but doesn't anymore? 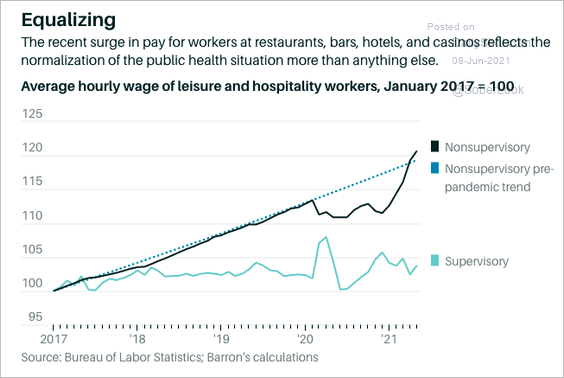 "Oh, noes! The proles are trying to keep up with inflation! Fire up the mighty Wurlitzer!"

CBS ran an interesting statistic this morning (i watch the morning news so you don't have to). 1500 "unruly passenger" investigations between 2010 and 2020, 3000 since January 1. And, of course, they follow with a bunch of passengers hog-tying an off-duty flight attendant. Yet the question is "why are we suddenly turning into assholes" rather than "does flying have to suck as hard as it does?"