"The Edge of the World" deals with the trope of Elves as the beautiful people pushed out by human progress. Fans of fantasy will likely pin this on JRR Tolkien. Tolkien, however, never illustrated elves beyond this: 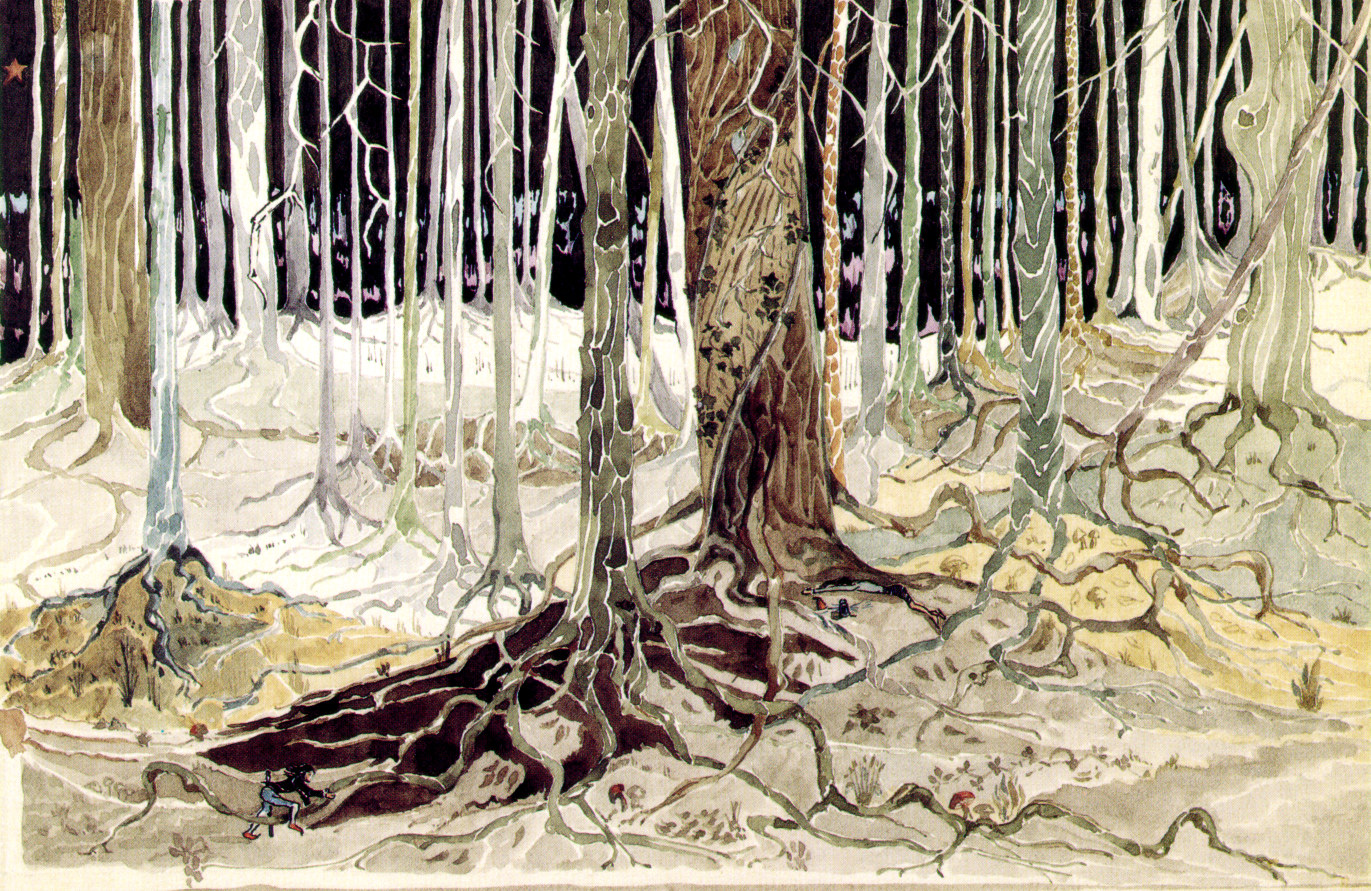 On the other hand, it's been pointed out by those more interested than me that Tolkien was inspired by John Bauer: 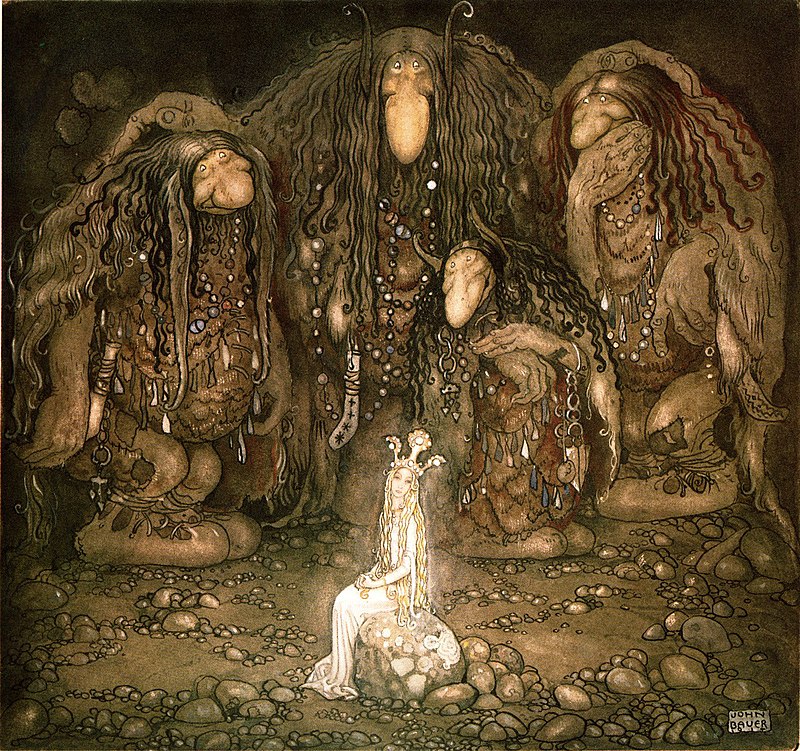 Bauer's influence on fantasy art can't be understated; he was extraordinarily popular during his lifetime and died in a shipwreck with his wife and three year old son in 1918. His primary works were as illustrator for Norse legends of trolls and gnomes, endangered species pushed out of Scandinavia by the advances of man. JRR Tolkien wrote his first fantasy works while Bauer was in his prime and didn't finish The Hobbit until 1937, 19 years after Bauer's death, but more on that in a minute.

I will confess to being in love with "elvish architecture." You know what I mean without having to think about it. Elves have never walked the earth but we know their arches, their spare off-white columns. Eighty years of fantasy has taught us all that Elves live their lives like every day is Liv Tyler's wedding. This, too, is evident in Bauer's work. But more importantly, it's evident in Bauer's influences, such as Alphonse Mucha. 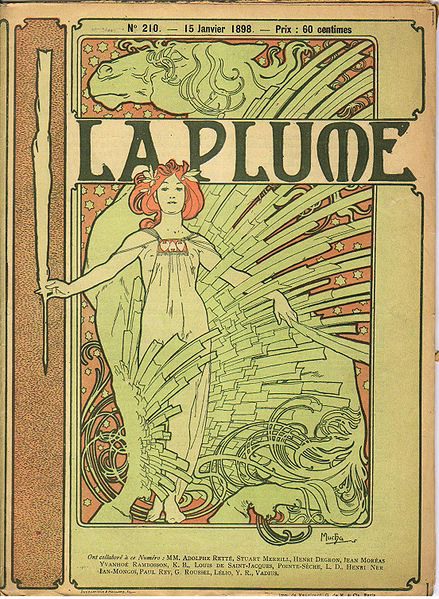 Such as Rene Lalique. 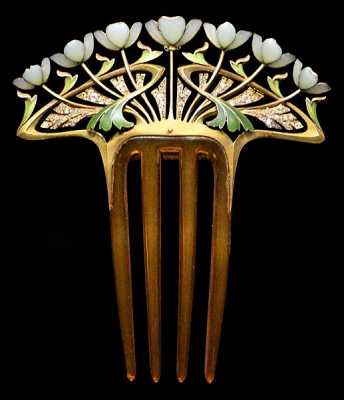 Such as Georges Fouquet. The Arts and Crafts movement was a rebellion against mechanization, a rejection of the impersonal kludgework so worshipped by modern-day Steampunk. It was a celebration of the artists and artisans being wiped out by Edwardian workhouses, of the Luddites impoverished and displaced by mass production and mechanical assembly, of the very skills and talents being brushed aside, of the very way of life defended by Friedrich Engels in the precursor to Marxism and Communism. Arts and Crafts eventually blossomed into Art Nouveau, a working man's artisanal rejection of the diamonds'n'pearls'n'platinum ethos of the Belle Epoque (aka the "gilded age"). Artisans of the Art Nouveau period focused more on the craft than the materials, often making jewelry out of horn and glass. There was a humanist love of organic form, of erotic provocation, of natural subjects that arose in direct opposition to mechanization and crass impersonality.

And then The Great War happened.

It was personally ruinous for practitioners of Art Nouveau. Mechanization struck back in the newly impoverished European theater, while a resurgent America with its assembly lines and abundant electricity launched Art Deco. "hand-made" became too expensive to bother with and the advent of large-scale industrial machinery gave rise to a worship of straight lines and shiny facets. The humanism of nature made way for the curves of the streamliner. The world lurched towards the Spanish Civil War and WWII; horses were replaced by Model As. John Bauer died in a shipwreck and Alphonse Mucha was effectively tortured to death by the Nazis.

And the Elves diminished and went into the West.

What's interesting to me is that elves as "lost beautiful people" is an entirely European conceit. Robert Howard (Conan, Ctulhu) had zero fucking elves in his works. Burroughs? No elves. Jack Vance's The Dying Earth came out between The Hobbit and the Lord of the Rings and it is entirely elf-free. In American fiction, the humans are generally inferior to whatever monster race is out there keeping them hemmed in while in European fiction, the tendency is to some sort of old, lost, noble race we've displaced.

And that old, lost, noble race sure looks a lot like Art Nouveau. 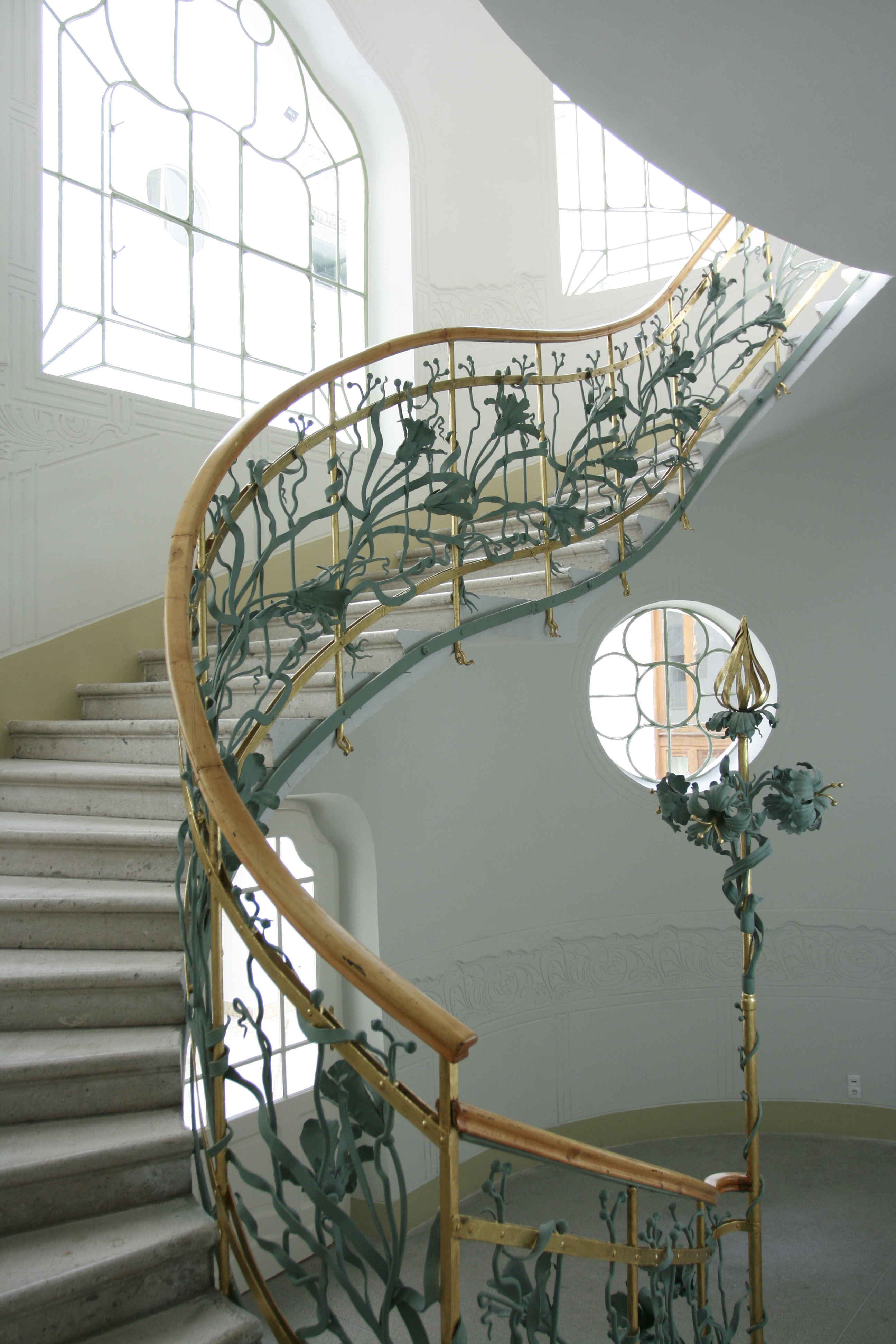 I can't help but think that "elves" are to European fantasy writers what the queens (dowager and regnant) were to Barbara Tuchman in Guns of August:

So gorgeous was the spectacle on the May morning of 1910 when nine kings rode in the funeral of Edward VII of England that the crowd, waiting in hushed and black-clad awe, could not keep back gasps of admiration. In scarlet and blue and green and purple, three by three the sovereigns rode through the palace gates, with plumed helmets, gold braid, crimson sashes, and jeweled orders flashing in the sun. After them came five heirs apparent, forty more imperial or royal highnesses, seven queens–four dowager and three regnant–and a scattering of special ambassadors from uncrowned countries. Together they represented seventy nations in the greatest assemblage of royalty and rank ever gathered in one place and, of its kind, the last. The muffled tongue of Big Ben tolled nine by the clock as the cortege left the palace, but on history’s clock it was sunset, and the sun of the old world was setting in a dying blaze of splendor never to be seen again.

As an American, I'm equal parts wistful and resentful. Because it's abundantly clear that the barbarian is me.