if you like paper crafts and punk rock, check out my etsy shop here.

I think no one has to present a proposed avenue of attack for a solution in order for them to recognize and do what they individually can to resolve an existing problem, lol

I get that "actions i state i will do to fix the problem i perceive to exist" are missing, in general, from the posts being made, but c'mon. this isn't a business and i don't post the way i send emails for my job. it doesn't mean those thoughts aren't also on people's minds. the important thing is to acknowledge there is an opportunity to improve. you really can't do anything without that

i mean like, this is a pretty good alternative

it can only do so much. the desire of the site has skewed notably towards link posts. discussion (#askhubski) and OC-sharing posts used to be extremely common. this used to feel like a place where people were asked and invited to share of themselves.

now it's a somewhat lofty but no better than well-sifted reddit link aggregator, minus a few recurring threads that help bring it together (pubskis, music threads, etc)

this is really not a place where people feel comfortable opening the floor with sharing themselves or their content anymore and that used to be very, very common.

Sometimes you've been around hubski long enough that you should realize the context of who you are, and who you're contradicting, on what specific topics. i don't agree with threats of violence against any group of people, but I also don't agree that "TERF" is an anti-woman slur. In fact, I'd say to be a TERF is to make an anti-woman slur.

AND LET'S ADD, it's to be utterly paranoid and self-gender-obsessed, like, for life. talk. about. gatekeeping. the marginalized class self protecting by further leaning on an even more subordinate class.

Just because some people wrote it on the web doesn't mean it's a sane viewpoint. Even if they are female-identifying.

I guess assuming I had like 30 seconds before security knocked me out I would like to think I'd say "be kind" but if someone had pissed me off on the way to this excursion (likely -- realistically as well as for the comedic relief) i'd be just as likely to admonish everyone "can you please just like, get in the turn lane when you know you're going to be turning? instead of throwing your blinker on and cruising in the middle lane?"

or something something something won't be equal until nine female supreme court justices something something idk depends on how enraged i am and about what at that moment but i can promise i'm not going to be able to succinctly express what i mean to in a way that will make a difference to the crowd, no matter what. and i wouldn't trust it if i could.

Some people like the performance arts and power to them. I never liked recitals when I studied music.

It is a dominant/subordinate relationship and that can easily become antagonistic especially in a bad work environment or with employees who don't feel safe. And it's very reasonable to note that employees may not feel safe in work environments due to no fault of their employer -- previous bad experiences, trust issues, lack of accepting the self leading to greater insecurities, etc.

I see why you would have used that characterization. At a good workplace, the relationship isn't antagonistic. But it easily can be.

If this is news you haven't been paying attention.

Yo I'm just gonna go ahead and bump this up the front page because I wrote this four years ago (cannot believe it's been 7.5 years on hubski) and like...

It just feels super more or just as relevant to read this today as it did when I wrote it. (I was inspired to go digging in my past writings yesterday. Including some stuff on hubski. It was a nice read. Heh. I was pretty good at that.)

It would be a fun exercise to turn this - the above - into an illustrated "children's" book. But I think that's too much work without much reward even for me to take on.

BTW, have I mentioned -- free anti-Trump vinyl stickers for anyone who wants them? Etsy won't let me sell 'em. 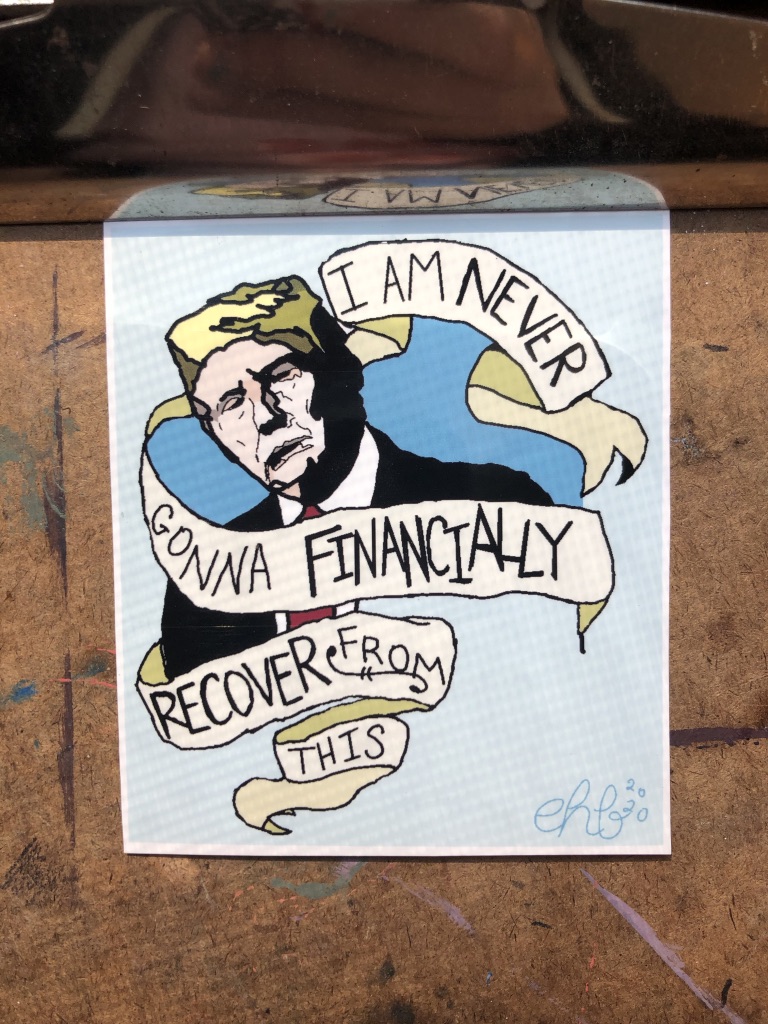 Yeah guys, like what do you think is going to happen? Cuz I really don't know. But I know that the virus rate has gone up 47% over the past 2 weeks and in my current state we are losing our "steadily declining" trend day by day. and that sounds to me like it's supposed to end phase 2. but no one is talking about it.

it would be a pretty smart strategic move to help departments recoup some lost income, let's be real

i mean, it wouldn't make anybody friends, but it would drive much-needed revenue in a covid-friendly way