“I was surprised then, when one of the members of the Expert Group who was most insistent that two-parent families were just an ideal, said to me quietly, as we were packing up, that she agreed that family stability mattered.

This is a supposed recollection of an off-the-record conversation in which there's a lot of published material; the "night whispers to discount the public" thing is pure disinformation.

This highly educated and affluent person prioritized stability for her own children.

There were four American women at that conference. Three of them were associate professors; at the University of Kentucky that averages $100k a year; at McNeese that could be as little as $46k.

I could go on but these sort of chin-stroking thought-pieces are fairly universal: (1) start with something everyone will agree with (2) bait'n'switch to hide where you're coming from (3) blacks are inferior, QED.

It's Bell Curve all the way down, always is. Like, how he lists white incarceration with a graph: 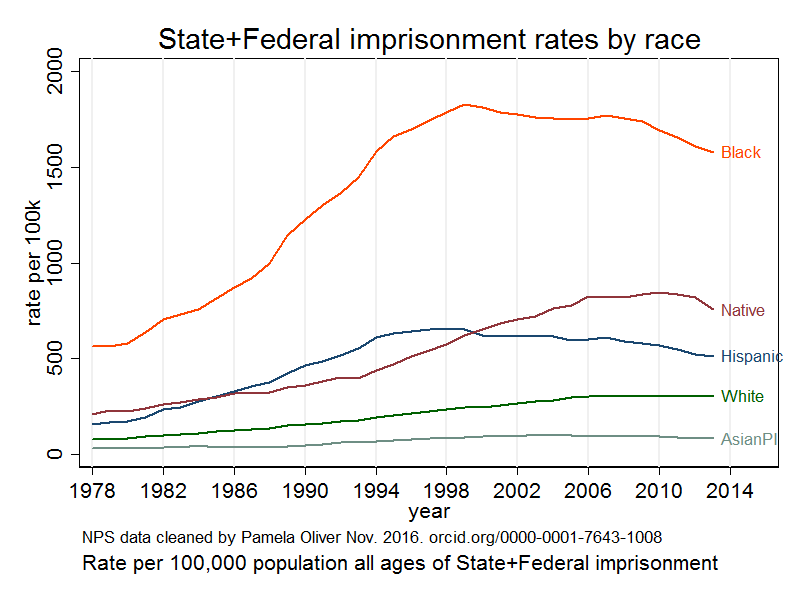 That's the "luxury belief" of the "defund the police" argument, not that rich white people wanna defund the police because they can afford to live without cops, but that the modern carceral state is, by design, an instrument to suppress reconstruction:

Over a span of five years, sociologists Kathryn Edin and Maria Kefalas talked in-depth with 162 low-income single moms like Millie to learn how they think about marriage and family. Promises I Can Keep offers an intimate look at what marriage and motherhood mean to these women and provides the most extensive on-the-ground study to date of why they put children before marriage despite the daunting challenges they know lie ahead.

2.7/10 rating, by the way. Because of three reviews on Barnes & Noble. All three anonymous, two with no review. That proud conservative heritage coming to the fore again. It's like,

I am well aware of the behavior genetics research, twin studies, and so on indicating little effect of home environment on personality, propensity for crime, addiction, and so on.

I'm not. I'm aware of countless studies that say the opposite. The conclusive answer to "nature vs. nurture" is "both." Going back to like the Scopes Monkey Trial and shit. But again, that's not the point - the point is to bait'n'switch from "everyone knows that our society has a problem" to "...aaaaand obviously it's liberalism." So you follow that with a bunch of cherry-picked, pointless statistics (chicks dig statistics). Finally you bring it back to personal responsibility:

You put a guy in chaotic and impoverished circumstances. And then you decide not to expect anything out of him. How can anyone possibly believe this will lead to anything other than disaster?

HOW. HOW can you expect anything of him? That's the question, that has always been the question, that is the core issue that has driven conservatism vs liberalism since the French Fucking Revolution. When things were more leftist, you gave him social programs. When things were more rightist, you take them away in the name of "personal responsibility." And then if you're a conservative asshole, you go

when we took away all the social support, things got worse. Obviously we need to take them away faster.

As an 8th grade math and science teacher , I can report that I see boatloads of low expectations coming from the homes ofmy students. I do nave some boys that actively disrupt my class and are defended by Mom or Dad, as I theunfair teacher play the role of classroom referee and call foul when necessary in my classroom and apply the proper consequence.

Wake up people! Parent is a verb!

Thanks for posting this article. This is where we start to repair the damage done.