I don’t care if we worship Elon Musk or build statues to him on Mars. I’m making a specific claim about what you ought to do with your life.

If you’re more worried about optics and guilt by association than you are with reasoning about and acting on what’s good, you’re completely missing the point.

Okay, but it’s still not a coincidence that so many billionaires are shitty people right? Either you have to be shitty to get there, or getting there makes you shitty. Either way it’s a bad outcome and claiming higher motives is dishonest.

My view is that most people, in general, are pretty shitty, so it’s not really surprising that this holds true in populations that haven’t specifically been selected for empathy and altruism. That’s why I started with and devoted the bulk of this post to the self-interested case. This whole secondary discussion is predicted precisely on the condition that you want to know how to help other people.

Become a Billionaire Part II: You're Not Even Trying

Log scaling is really poor, but as the NYT reminds us, we’re talking about really extreme levels of wealth here. Sure, you only gain a few more points of happiness between an income $75,000 and $160,000, but Jeff Bezos is sitting comfortably at a net worth of $211,000,000,000. Our intuitions just don’t apply very well here.

The model doesn't have to apply here, it's ladders and ladders of extrapolation ahead of any data. At, what, six orders of magnitude of difference is like administering WAIS IQ test to a nonlinear being existing outside time.

A tangent, one I've been on and off procrastinating my PhD over for a while now:

The reason those measurements are not just necessary but are looked into with bated breath is because this is the closest we can hope to get to testing gravity on quantum scales in the foreseeable future. Or, to be precise, mesoscales -- it's a long road to quantum. Just because Newton's model works at scales in the article doesn't mean it'll keep doing so (EDIT: or that it should have been assumed it would do so without a need for testing), and very serious basic physicists know it has to be tested at all intermediate distances and masses. Yes. Newton's gravity. It's still hawt and exciting, exactly because it finally gets thorough, reliable, repeatable tests at lower end of the parameter space.

I'm saying it because while I absolutely can appreciate and play with likely-false hypotheses... even neo-rationalists should know the need for rigour. Ho-ho, I too can be cheeky about imagined opponents!

No binding promises are made, but I'll try to dissect this soon-ish rather than later-ish. 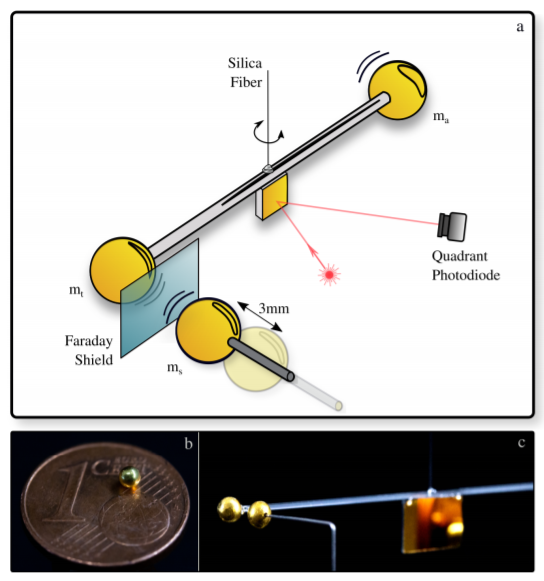 A perturbation, perhaps a truck passing a kilometer off, or an earthquake near the Canary Islands, will set it oscillating, that is, swaying to and fro once every five minutes, so wait until the Christmas season when things are quiet. Set aside three weeks for observations.

or just about a billion molecules of gas per liter flying around the hypersensitive pendulum in your vacuum chamber, hopefully not adding too much noise to the signal. Don't forget air springs and Viton™ rubber feet to dampen vibrations.

Step 3, etc.: Jiggle a third tiny gold ball mounted on a thin wire near the pendulum very carefully to induce oscillations, and observe.

Thanks, that was fascinating, but I didn't get far enough along to see how they imagine possibly scaling this down below the gram scale, to say nothing of the Planck mass.

In principle? It could go to the nanoscale, so tens of atoms, before tunneling and Casimir effect influence would be too much to ignore. In practice? I think there'll be a plateau around tens of thousands of atoms due to the electrical charge becoming a growing concern and quantum effects surfacing their ugly heads. I'm very happy you liked it.

Edit: While, after cooling down, I think this comment is unnecessarily mean, I'd rather have it visible as a reference and comment on article's maths than delete it entirely.

So the relevant function is not really log(wealth). It’s more like log(wealth(wealth(startup rank)), or log(e^x^y). Does that end up being log scale? Linear? Exponential? Without knowing the specific parameters, it’s impossible to tell.

Maybe I shouldn't come on Hubski or write essays (or, frankly, write) when everything seems to try and piss me off from the very morning, but here it goes. In today's section of nothing is impossible, it just depends on precision requirements:

Log(e^x^y) = x^y * Log(e) (and Log(e) = 1 if it's a natural logarithm, which it isn't because those are distinctly marked as Ln), so the plot would actually be a 2D sheet embedded in 3D XYZ space and become a exponential function of y for x constant (f(y) = x^y) and power function at y constant (f(x) = x^y). x > 0 everywhere. When taking one variable constant, you're kinda seeing a 'slice' from that sheet I mentioned.

In case of determining specifics, it's a golden rule in modeling that you don't have to be exact ('cause you can't) but have to be good enough for the thing you model, at a range you model. In radiometry, you so rarely work with a single isotope that the actual (EDIT: but still simplified and incomplete) decay formula is A exp(-Vt) + B exp(-Wt) + however many terms, each with two parameters for each distinct isotope of a compound you work with. But it'd be borderline uninstructive for illustrating the concept, so anyone else rarely (if ever) sees it beyond "How much isotope left (time) = Starting Amount * exp(-Isotope's Halflife Constant * time)."

What you have there would be perfectly serviceable in the class of functions C^x +D, 0<C<1, C,D=constant. Or, shit, C/(x - 1). But then again, it's probably not enough for this super-duper precise empirical-by-handwaving model. After all, you're trying to use it later to do asymptotic reasoning for/with/through the arbitrary parameter of 'startup rank', and it's not important to just know the (existence of a) value at a limit because math is about the journey, not the destination. Hey, wait a second...

I actually got to nine respectable paragraphs in my proper rebuttal, but this is SSC/LR through and through[0]. Folks introducing themselves as rationalists who disregard/flunk maths but authoritatively talk about AI and AI accessories by peppering in fifty techy analogies where a dictionary would do, but only discussing them within the bounds of their 'infohazard' trigger warnings. I'll take my time, but if I forget to finish it, this won't hurt the sum total of human knowledge beyond the fact you, the reader, are now aware of Roko's Basilisk and will be tortured for eternity in Robot Hell for not aiding your benevolent AI master come to existance sooner. 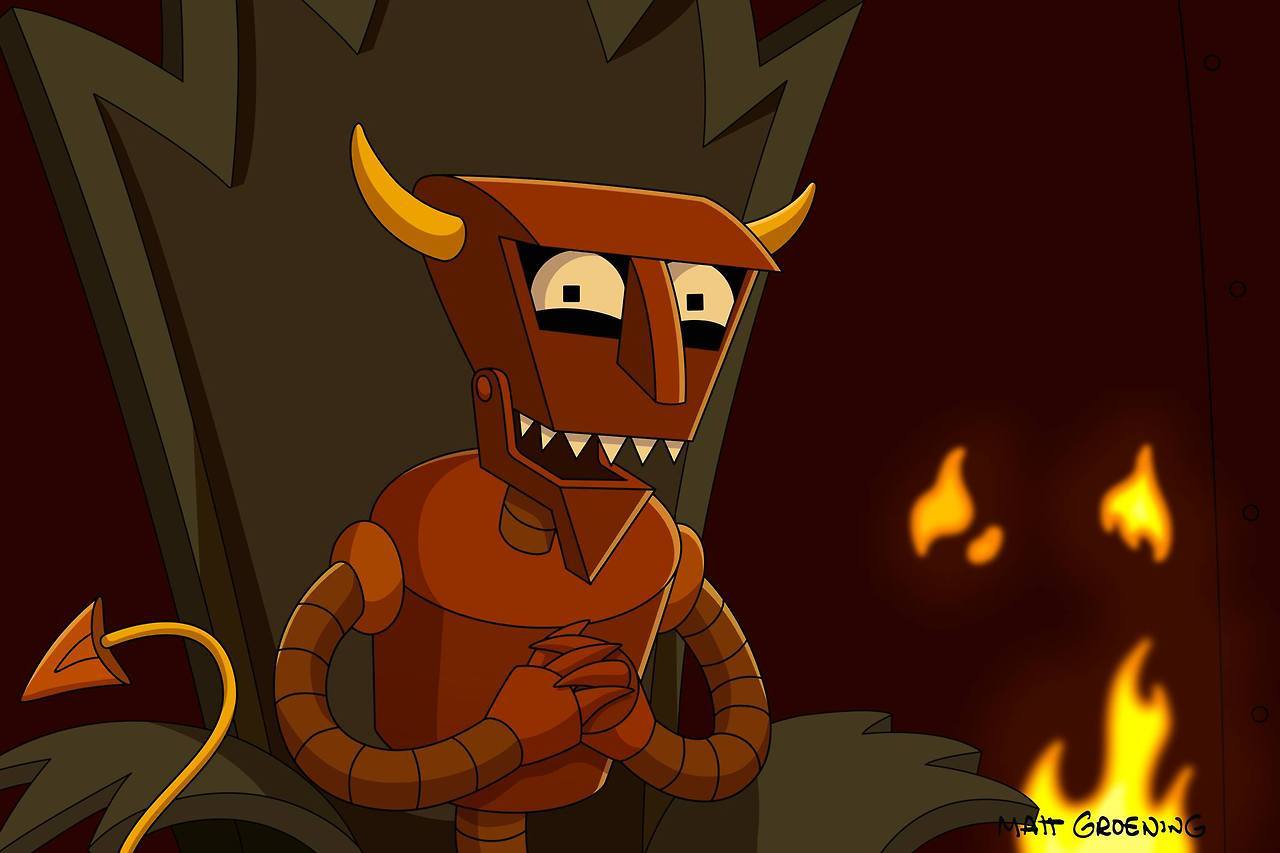 Initially, I tried to work in "your eyes say no, but you have no mouth and must scream" but failed.

[0] - Though his early posts seem fine for what I read.

I don't like the first paragraph which implies that the best way to take power away from the greedy assholes who currently have it is to become an oligarch yourself and dilute them?

My problem with billionaires (and large corporations) is that they control so much of our life in a completely un democratic way. We should be doing as much as possible to move away from that and not keep up inequality cuz "ur gonna get there for sure and be one of the good 'uns"

I also completely believe that every billionaire got their weath through exploitation. It's just such an unfathomable amount of money that no amount of hard work justifies.

My problem with billionaires (and large corporations) is that they control so much of our life in a completely un democratic way.

I agree this is not democratic. The democratic organization controls my ability to travel, my options for buying and consuming goods, my healthcare options, and much more.

It's just such an unfathomable amount of money that no amount of hard work justifies.

To choose an unusually sympathetic example, J.K. Rowling is a billionaire. The amount of work to write the Harry Potter books would have been similar no matter how popular they became. If she gets a dollar every time someone enjoys one of her books, does that become unjustified after some number of readers are delighted?

moralize the relentless pursuit of the acquisition of wealth

I didn't get that message from the article, indeed it carefully avoided justifying existing billionaires, suggesting that you might be a better kind of billionaire.

There are some moral actions you can do which are free.

There are other moral actions, like paying for long-lasting insecticide-treated net distributions in Akwa Ibom and Bauchi States, which reduce child deaths. You can do more of these actions if you have more money, no matter what other billionaires are doing.