Mining cryptocurrency at home has long been a bad deal: the electricity used by the computer would cost more than the product is worth, so you might as well just buy crypto directly and let the pros do the mining.

The 3-7× price increase over the past year changed the equation. Last March, I bought a new desktop PC to work from home, let the salesman talk me into an NVidia 2060S, and recently learned that GPU mining is positive sum.

Francis Fukuyama has a point, there are good reasons to build your own PC, but I already spend enough time fussing with tech and prefer to spend more time playing catch rather than configuring BIOS. (Apple's alleged "near-monopolistic position in the marketplace" is ridiculous for PCs, and I doubt Fukuyama built his own smartphone. Apple does well because many consumers prefer their products.)

A profitability calculator estimated that my GPU could be making $4 profit per day, with a hash rate of 37 MH/s. Cryptocurrency mining mainly entails digging through hashes one by one until a sufficiently low one is found. My GPU can calculate about 37,000,000 hashes per second. The entire Ethereum network runs at about 300,000,000,000,000 hashes per second. So the probability that I will find the winning hash for one of the blocks (worth thousands of dollars) which are mined every 10-15 seconds is about 0.1 in a million.

So I joined a pool of miners to improve my odds of a payout. We all mine together, and when someone in the pool wins a block, we share the proceeds proportional to computational effort.

I checked a list of mining pools and tried the #2 pool, Ethermine, which recommends the open-source software ethminer. The command line parameters were confusing and I wasn't sure if it was working or not, so I tried another group, Nanopool. The site provided a ready-made exe to run, probably not a smart idea, but I figured the worst case scenario would be pirates stealing my fake crypto money.

The web site provided a dashboard where I could see my worker process running, my hashrate, and my "shares" submitted: the hashes that were close but not good enough to score a block, and instead demonstrate a level of effort. Each time the pool mined a block, I got a proportional credit.

After 24 days, my worker had accumulated 0.05 ETH, the minimum balance for a payout. My worker process was configured with the public key to an Ethereum address I created using MyCrypto, and Nanominer sent the 0.05 ETH less a 1% fee (waived if you hold out for 0.1 ETH) and the network transaction fee. At the exchange rate of $1314, this was a $65 payday, at the cost of a GPU drawing about 175 watts for a few weeks. I estimate about a hundred kilowatt-hours which cost ten bucks or so and kept a closet warm (where I isolate the PC cooling fan noise).

While waiting for a payout, I had set up ethminer to run with one of the smaller pools, Ethash Pool. With only 0.1% of the total network hash rate (compared to 6% at Nanopool) blocks trickle in just a few per day. Since my puny GPU is a bigger share of this smaller pool, I collect over 0.01% of the pool rewards, a rate of about 0.002 ETH per day (which is similar to my Nanopool rate). A Google spreadsheet tracks progress and sends an e-mail with every new block, giving a little reason to celebrate. It's more fun, of course, when the ETH/USD rate is on the rise.

Some skeptic recently expressed doubt that cryptocurrency had value at all, and advised a holder to cash out if it were at all possible and avoid a crash. It's a valid point that any kind of money is only useful as a way to get something consumable, so I decided to spend my gains. There are a few sites that accept ETH in payment, so I shopped around for a t-shirt or Raspberry Pi or green laser. But I already have stuff like that, so I donated my first payout to GiveDirectly through GiveWell. Maybe somebody else can get a shirt or a laser.

I think it's worth considering the usefulness, or not, of the heat generated. In the summer, you have to pay for the GPU to heat the closet and then pay for your air conditioning to get the heat out of your home. But in the winter the heat offsets your furnace. While the electric cost is probably higher than central heating for the same unit of energy, it does add to your profit. The $10 in electric cost may have saved you $5 in natural gas.

The year is 2150 and you're traveling through the nuclear winter wasteland, searching for somewhere to settle that's safe from the packs of feral self-driving cars and rogue delivery drones. Inside a derelict Amazon fulfillment center you come across a group of silhouettes huddled around a crypto miner for warmth, drawn in like moths to a flame by the steady rainbow pulse of RGB lighting emitted from the old gaming rig.

They should totally make a GPU that doubles as a space heater for us Canadians. 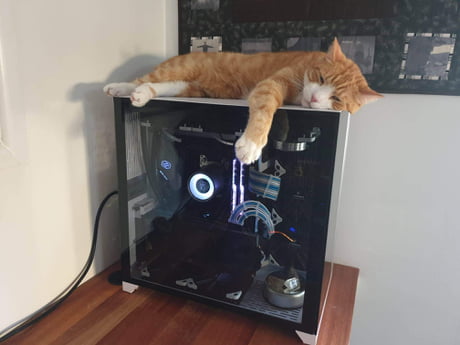 I could recommend a few models, I've been learning enough about the topic lately haha.

Why not going Bitcoin? Is the $40* markup on btc vs etherum balanced by the mining cost?

Bitcoin and Ethereum use different encryption algorithms. The graphics cards used for gaming used to be fast enough to mine Bitcoin profitably, but later chips designed especially for Bitcoin made GPUs too slow to keep up. The Ethereum algorithm is still favorable to graphics cards.

What is the difference between Ethereum and Bitcoin mining