Today's focus is going to be on two of the biggies within the Cascade Volcano Range because how cool is it that there are glaciated volcanoes able to climbed on the West Coast! That is still something I haven't quite wrapped my mind around.

2020 weather and snowpack is weird compared to recent years, but from long-time climbers, more similar to a decade or two ago. I take that as a good thing at least for this year but I am doing climbs in conditions more reminiscent of early June last year which poses interesting challenges.

A few weeks ago we snagged a permit to climb Mount Rainier, otherwise known as Mount Tahoma - the permit system is bonkers this year, very limited for all options. Without guiding services going up and down the mountain there is much more hazard involved with climbing this season - less of a path, less support, etc. It takes a lot to climb a mountain, you need fitness, you need technical skills, and you need competency at logistics and trip planning. So, you can either pay a thousand or two thousand dollars a trip to have a guide get you up, or you can acquire the skills and gear in other ways...we go unguided.

The nice part about where I live is it's only two hours driving time to Mount Rainier, a 4,000m peak which is the highest point in the state of WA and is the tallest volcano in the Cascade Range.

Getting limber and finishing up packing and sorting through gear. 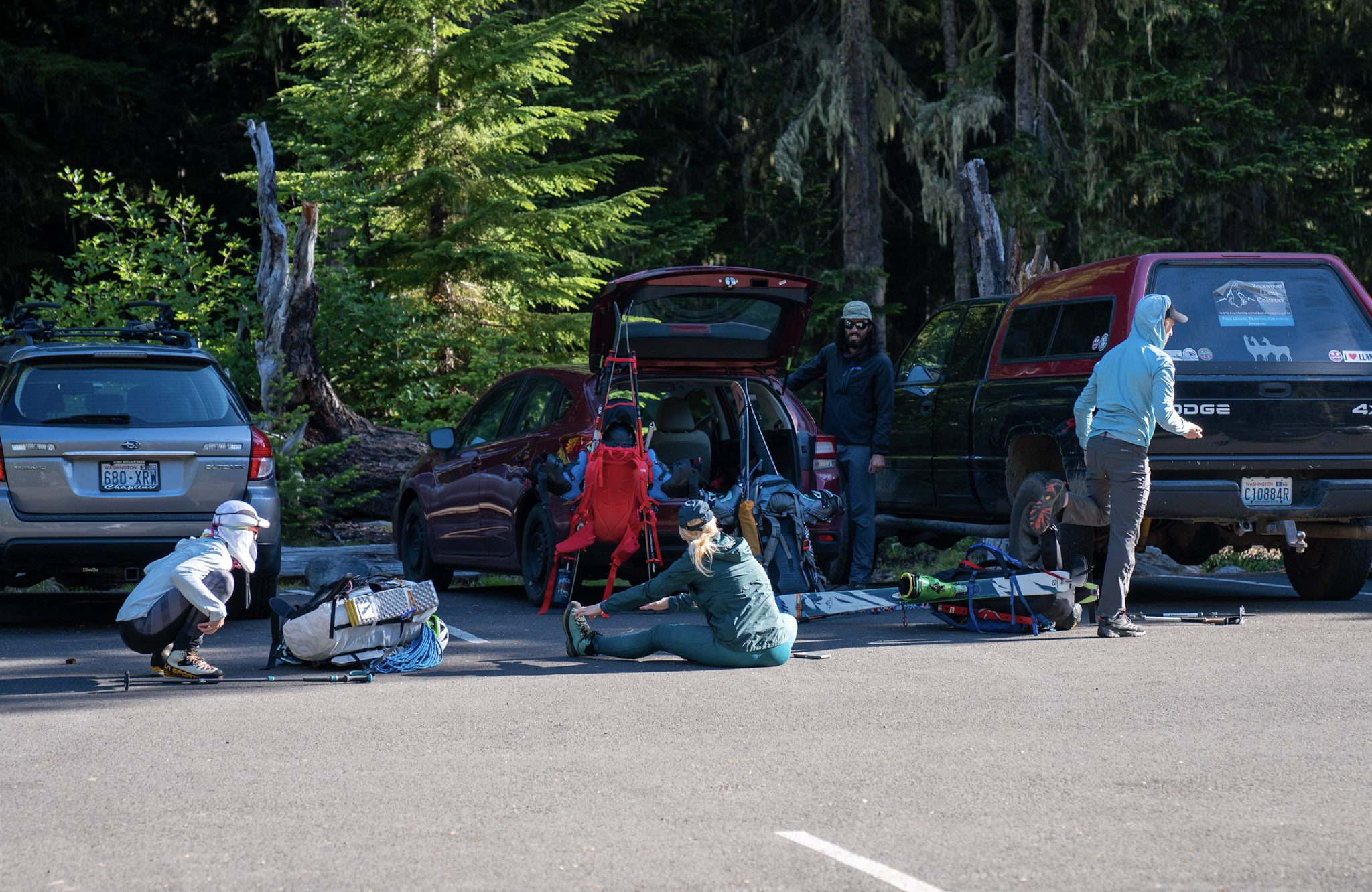 So the nice part about having skis is you...get to ski...the fucking atrocious part about carrying skis this time of year is you're carrying them four miles one direction with about 2,000ft of elevation gain. 58lbs pack here we come choo-choo. 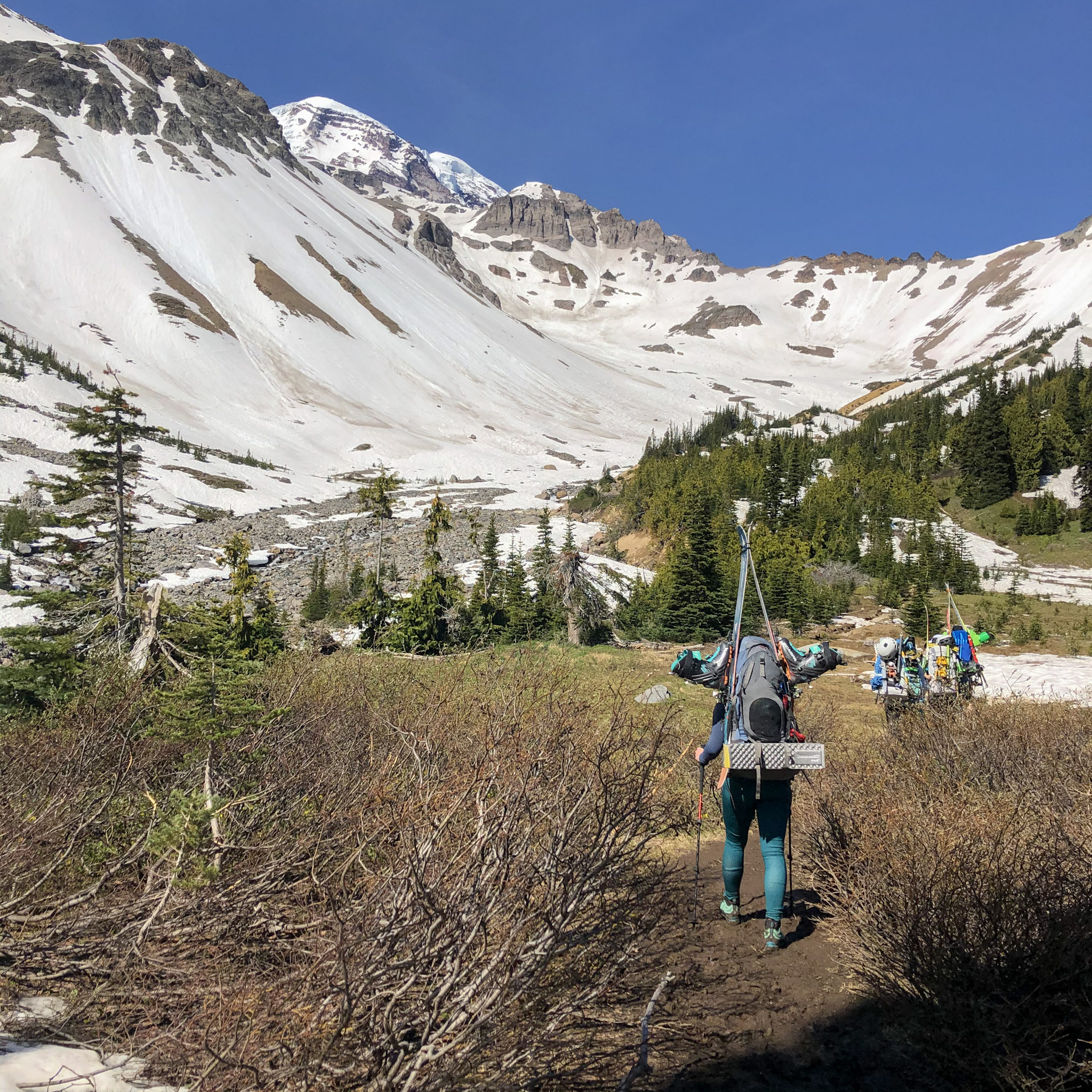 Thank fucking god it's time to put ski boots and skis on! Did I mention it was a good 70 degrees out on this day. TOO HOT. 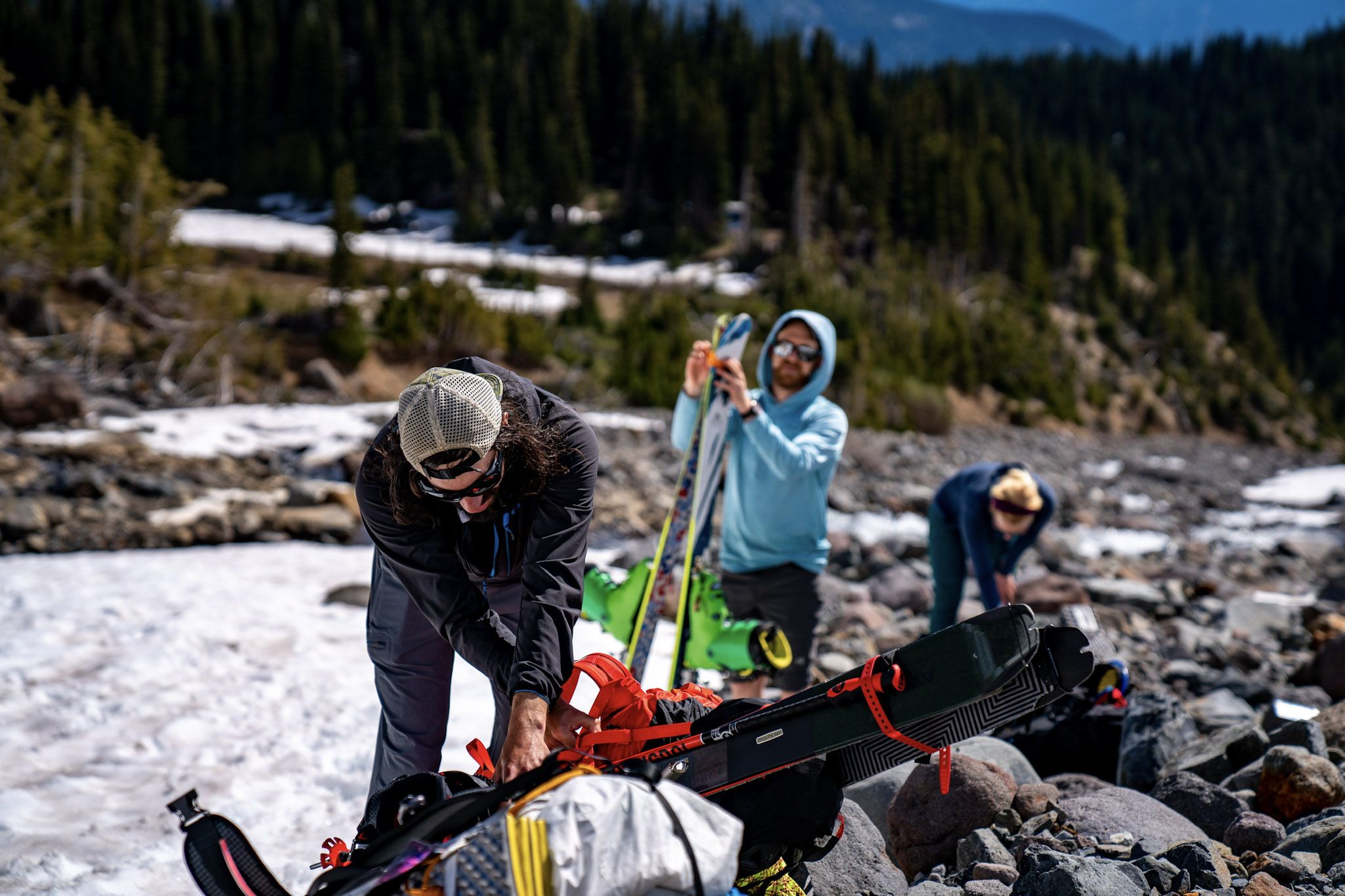 Mount Rainier is one of the most glaciated mountains you can find yourself on. In order to reach camp you have to cross a smaller, inner glacier named the Interglacier. Which despite being a rather benign glacier does crevasse and one of my friends damn near fell into the thing last summer because they were unroped. Skinning up it is fantastic though, it's not too steep but steep enough that there's marked progress with every step. And it gives you an appreciation for the ski route back down the valley. 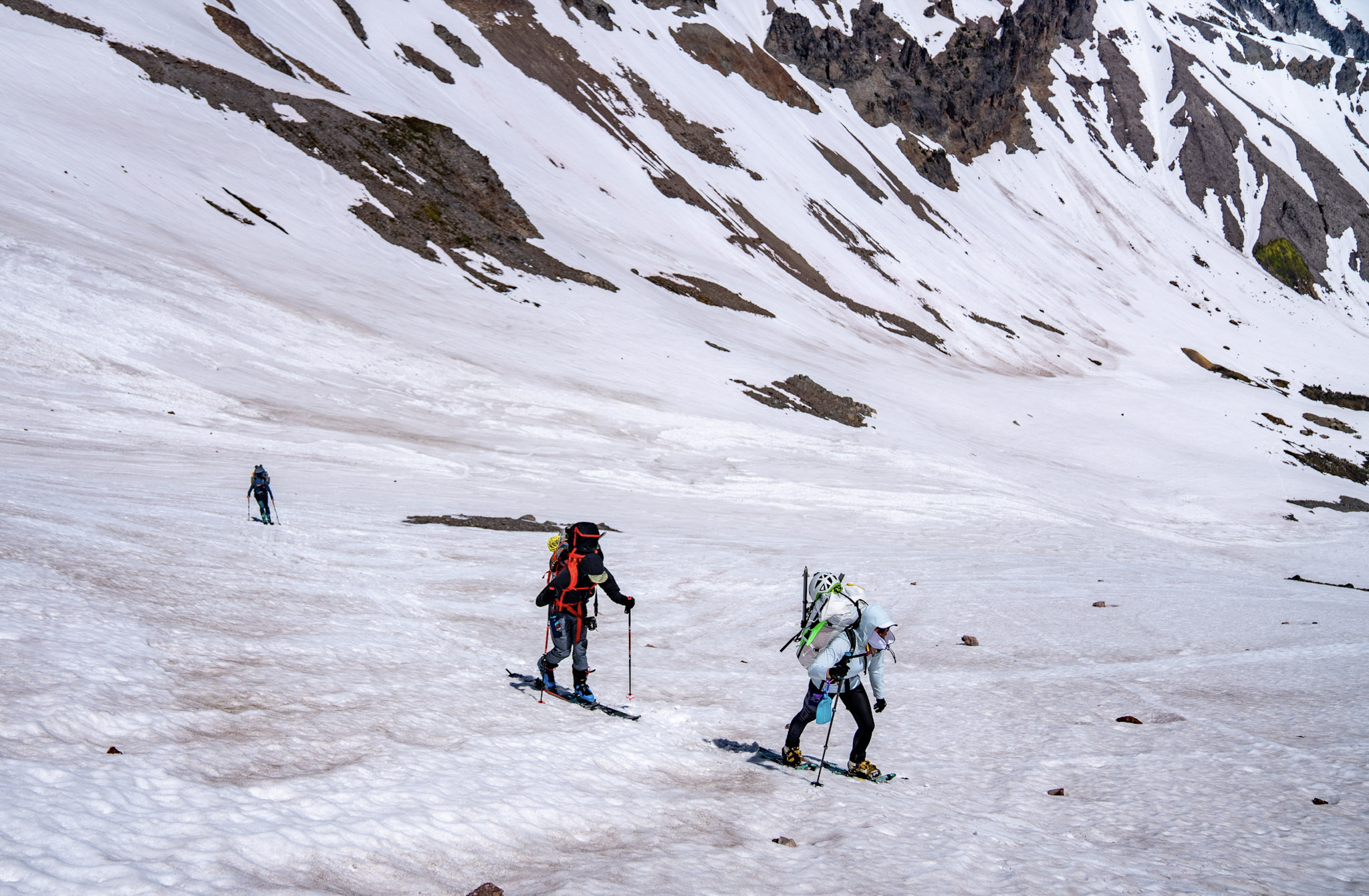 There's a short, steep drop-off from one camp area to the next which descends onto the Winthrop Glacier which is a more serious endeavor. Another transition because snow conditions weren't great and there were clear crevasses opening right below the ski path. 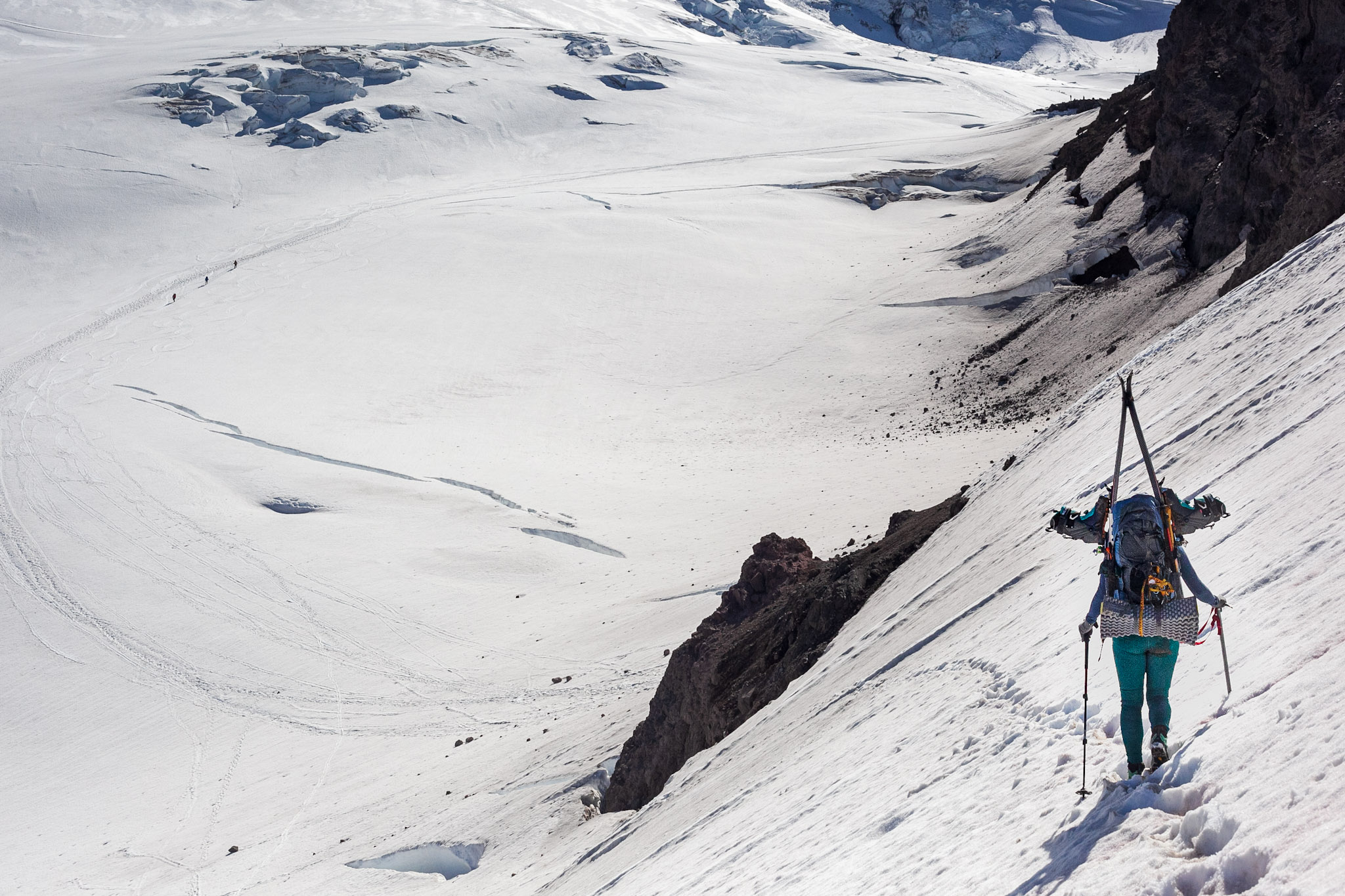 Setting up camp is always something of a ritual - you roll in and are done by 5pm and then getting ready to be moving again by 11pm...which, by the way, it's light out when you go to sleep and light out when you wake up. So you start moving when it's light, keep moving when it's light, move into the dark, and again while it's light out...it's a trippy experience and one that not everyone is able to handle well. Fortunately, me as a body is able to tolerate it just fine. 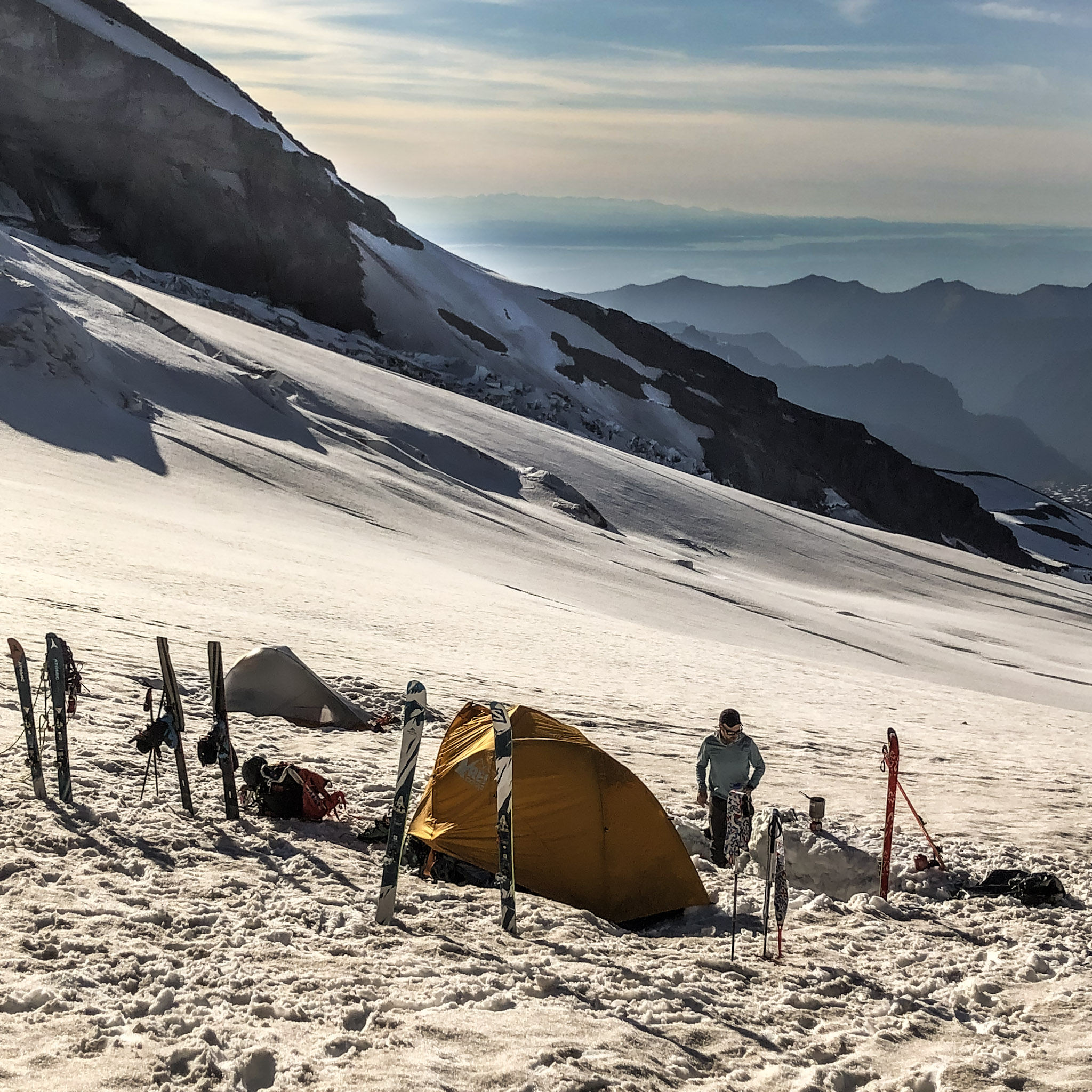 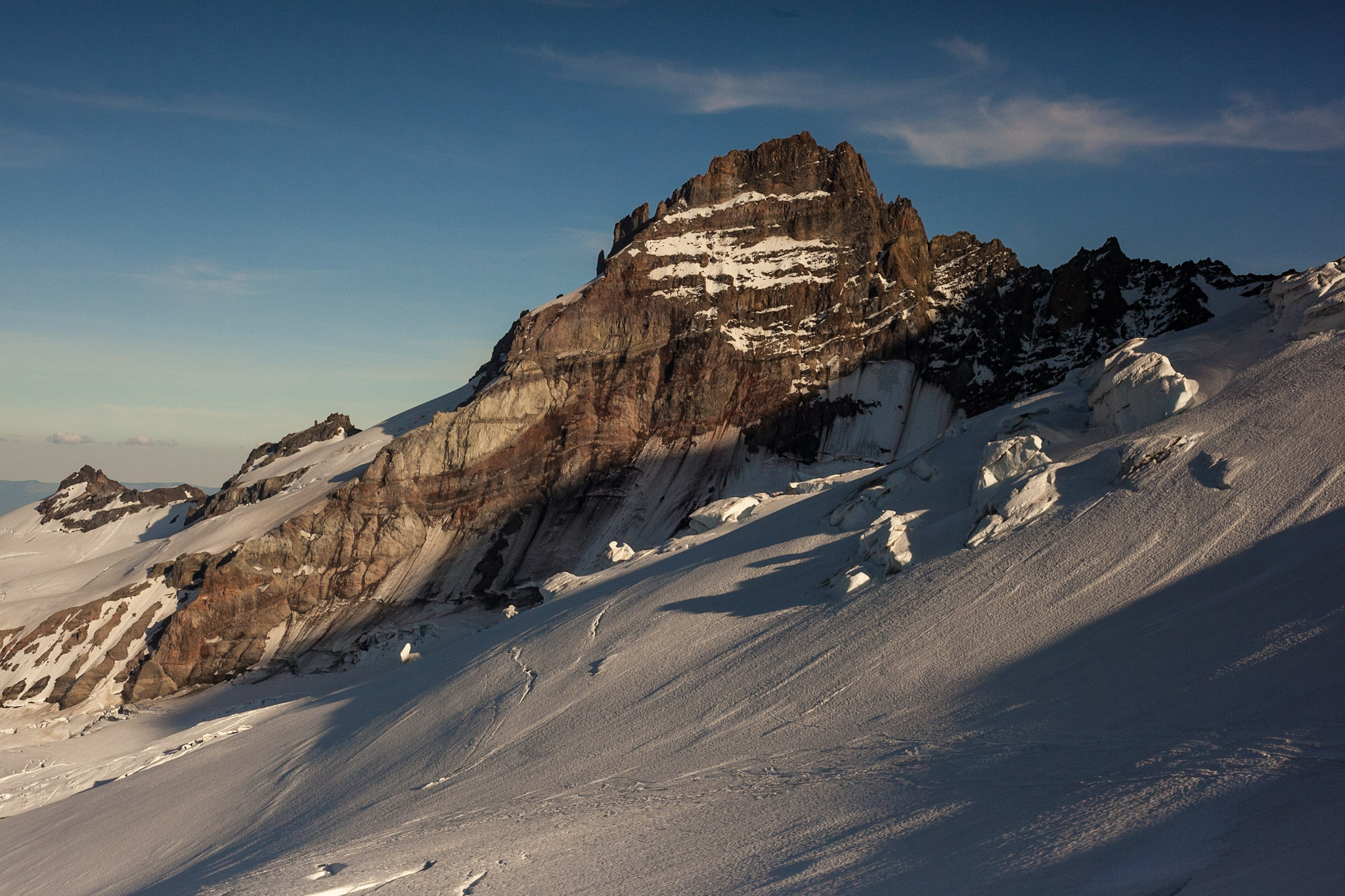 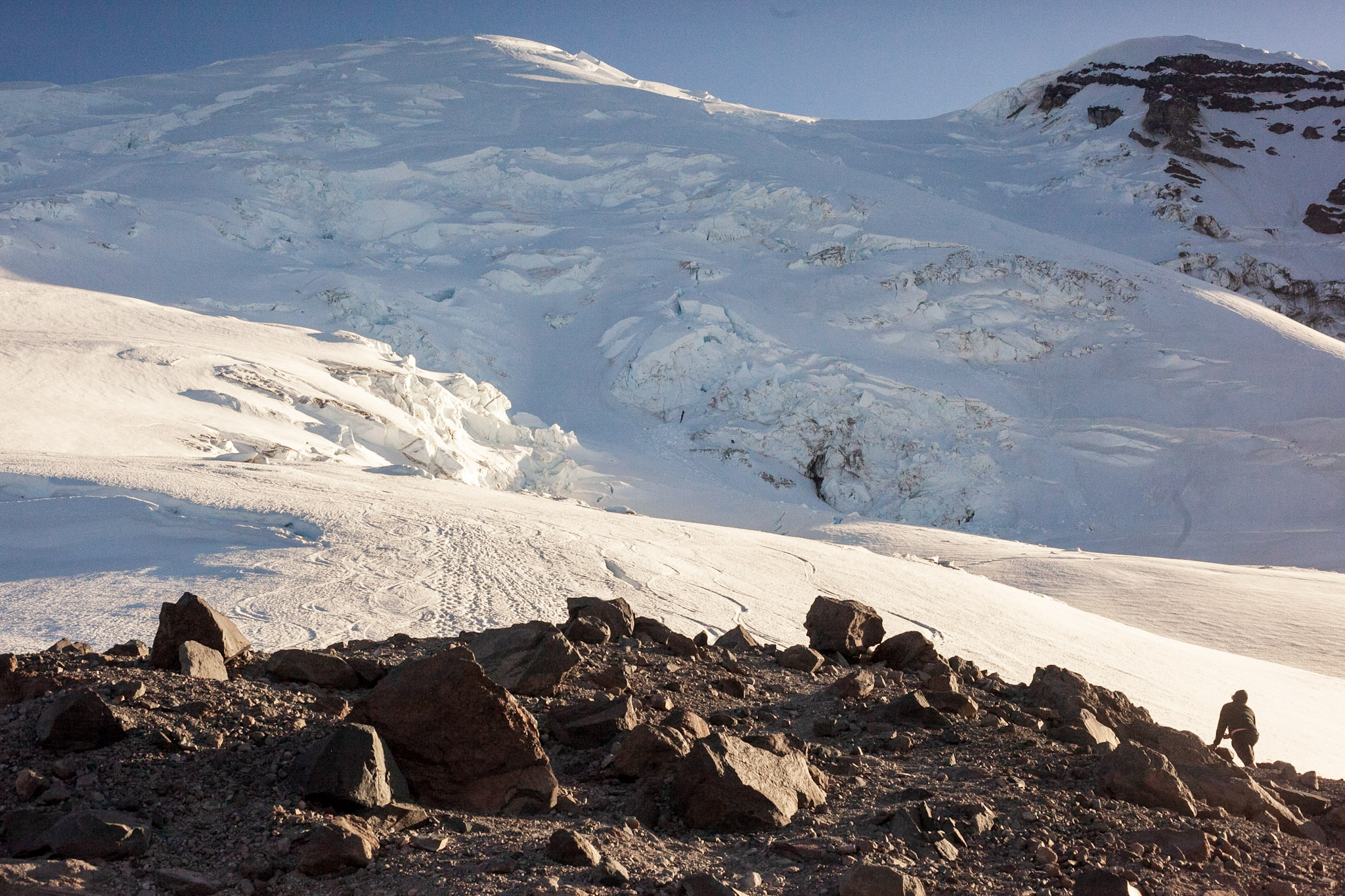 That said, I had a fucking killer headache probably from a level of dehydration when we woke up which was concerning to say the least. I downed a liter and a half of water and electrolytes right before getting moving.

We had two rope teams on this climb, one team of three and one of two. At this point you're in a harness and glacier gear, crampons, etc etc. and are trying to move "fast" and light. Fast is relative at this point because you're camping at 9,300ft and trying to ascend to 14,410 ft and altitude does take its toll at a certain point. More on that very soon...

My rope partner was feeling worse and worse going up, despite our steady progress and my continued prodding to eat and drink regularly and a lot. From 12,300ft up things got dicey until 13,000ft. Once the nausea turned to vomiting turned to being disoriented and "feeling of doom-y" it was time to turn around. Radioed the other team and told them our plan and allowed them to continue their summit bid. None of the crevasses were terribly open and I felt confident in my skills to prevent a trip from becoming a fall, and it was warm enough that should something happen a rescue could work. 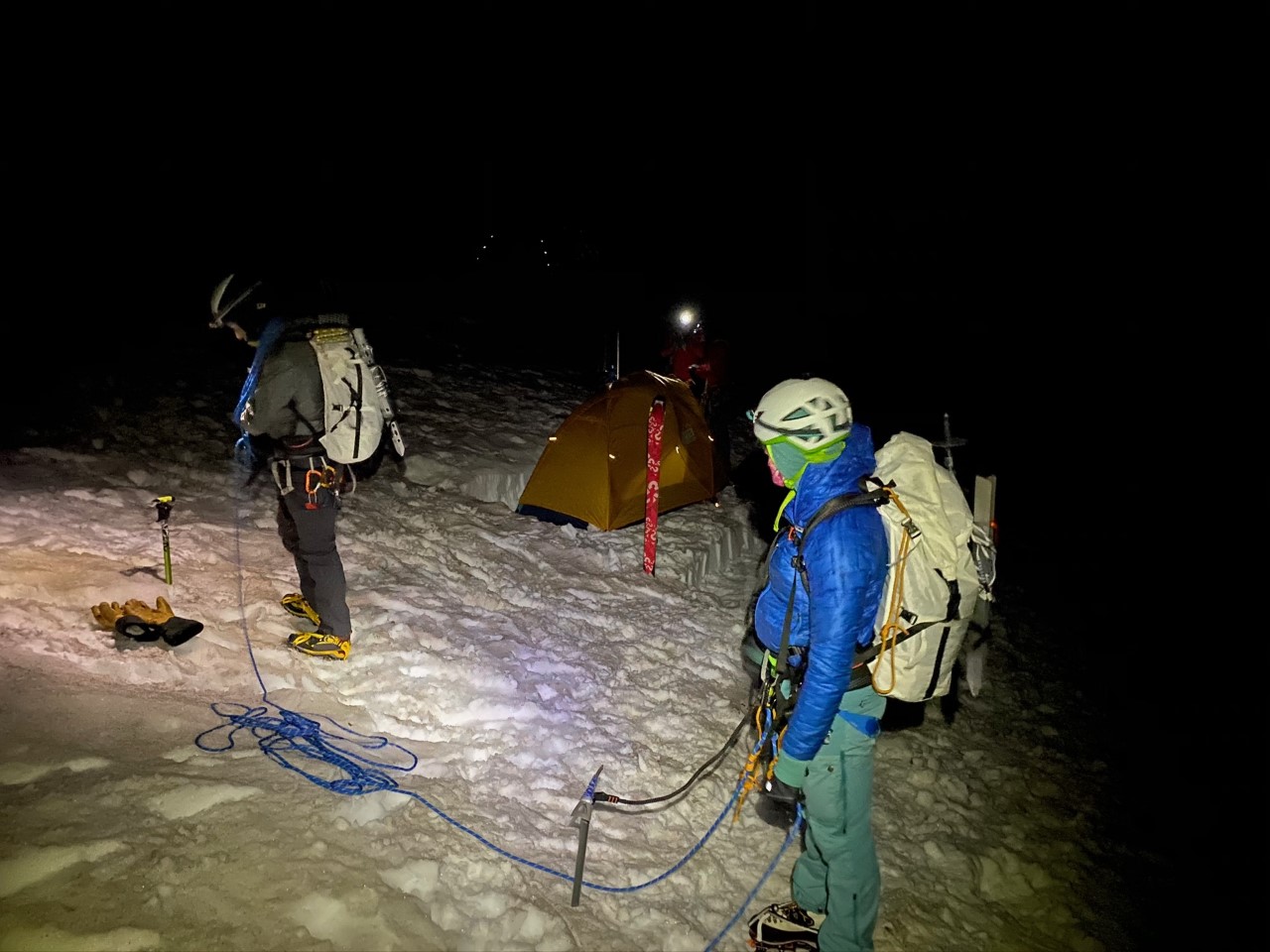 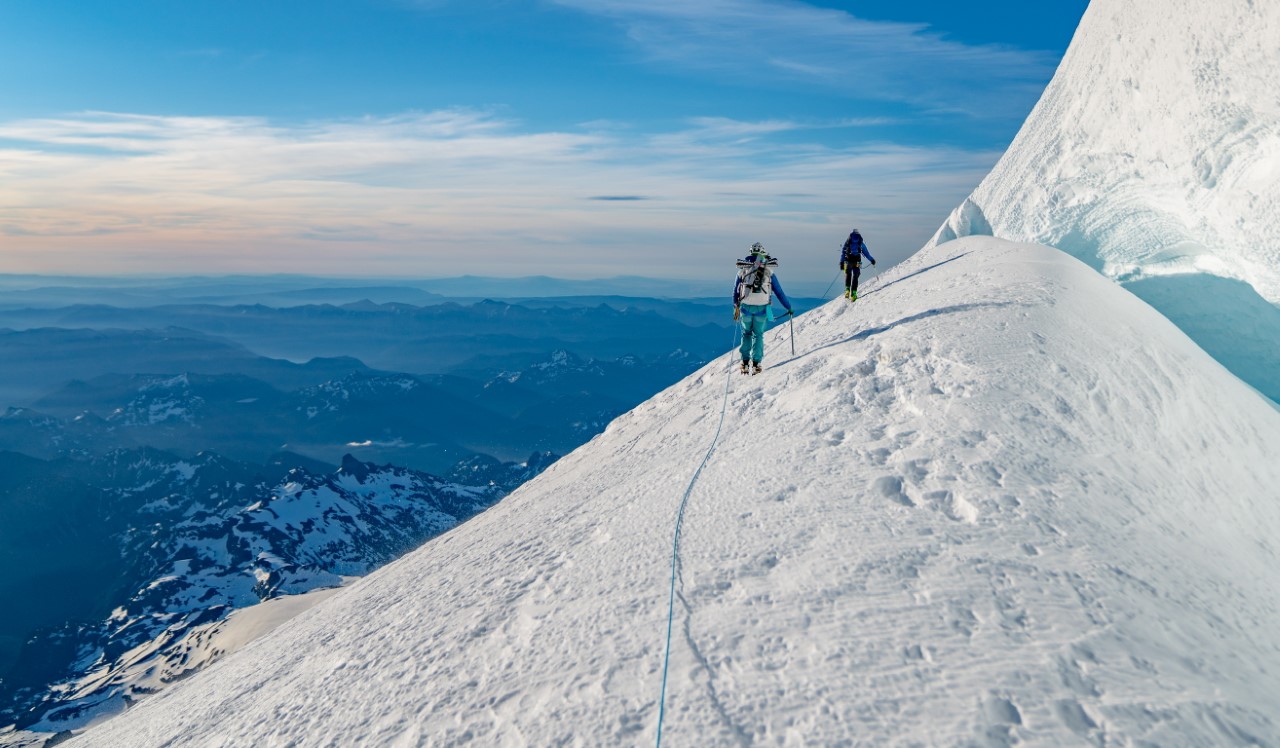 Probably two of the most stressful hours on a mountain I've had to date, though - it's hard to describe how tense things can get when you're trying to short rope and guide a sick person down 2,000ft so their altitude sickness will subside to a point where they are able to function again. Meanwhile at any moment things could go terribly south, and with a two person rope team it was 100% on me to assure the safety and lives of two people. The only thing I could do was promote downward travel as safe and efficiently as possible with a partner who was vocally ill and upset. By the time we got to camp life improved drastically...partner was feeling mostly better but would remain ill to a degree for the rest of the day. But we got a consolation prize of 4,000ft of skiing in amazing conditions, and the other rope team reached the summit! 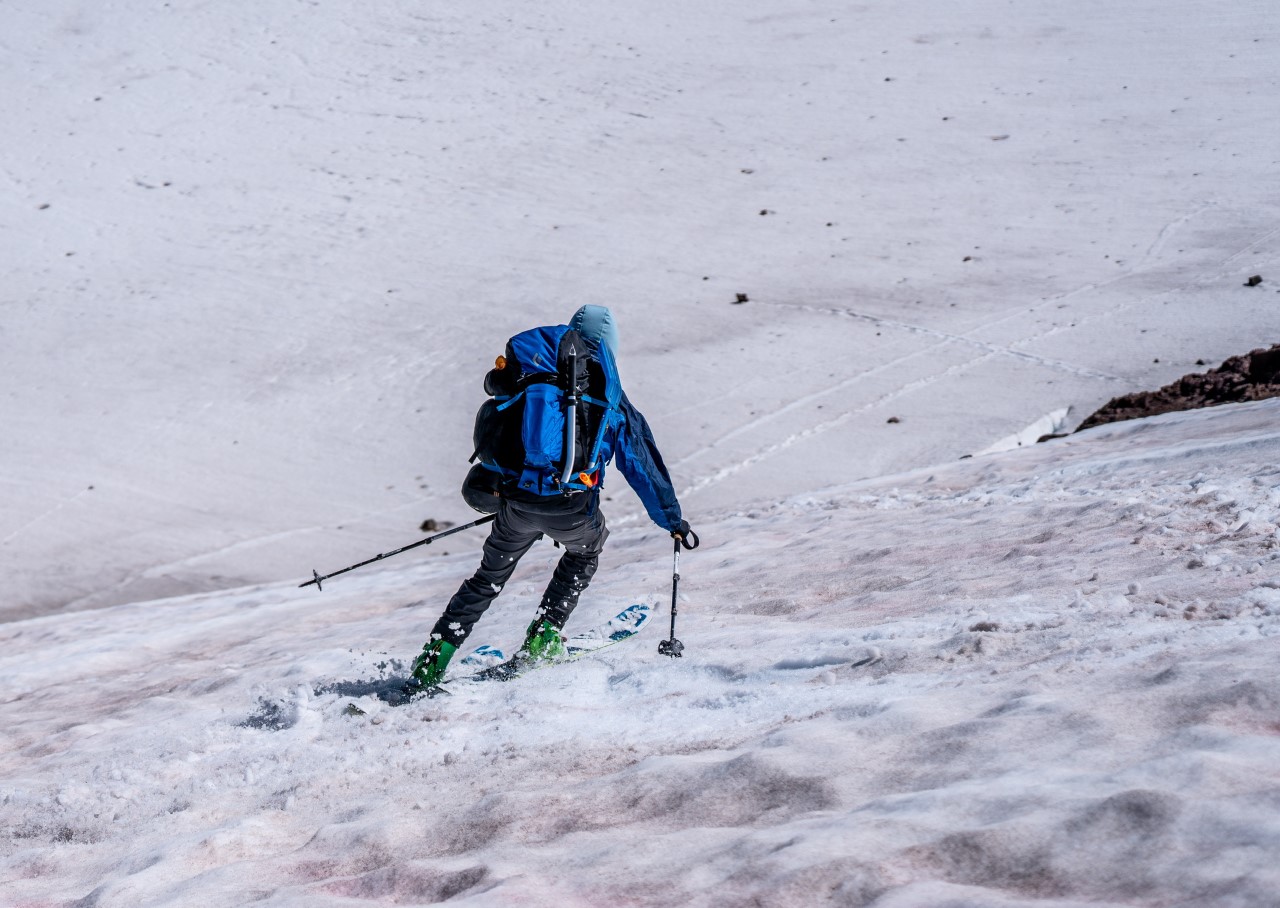 Such a stunning view!

The part where I was trying to make sure me and my partner didn’t get hurt or die, absolutely. The rest was Type 1!

i did not fully understand this. you spent a night at 9000 feet, but not the actual night? why not?

Yes, we reached camp in the afternoon and napped and woke up again to start moving before midnight of the same day. For these kind of things you want to take advantage of "good" or at least improved snow conditions for ascent which typically occur overnight. On crevassed glaciers such as this one you are safer moving when the snow is firm and better able to support weight, which occurs with lower temps / wind chill. In general it is easier and faster moving uphill on firm snow as opposed to loose or wet, heavy snow which will occur during the day with enough sunlight + warmth.

What's it like? Does climbing a mountain fill you with awe and wonder?

Absolutely every single time. Climbing a mountain is physically and mentally taxing in some situations, not always. It is almost always fun and enjoyable. Terrible weather or poor company can change that. But the scenery in the PNW is universally great, the mountains and ranges are significant and make you feel small in the world and scheme of life. It's a nice feeling.