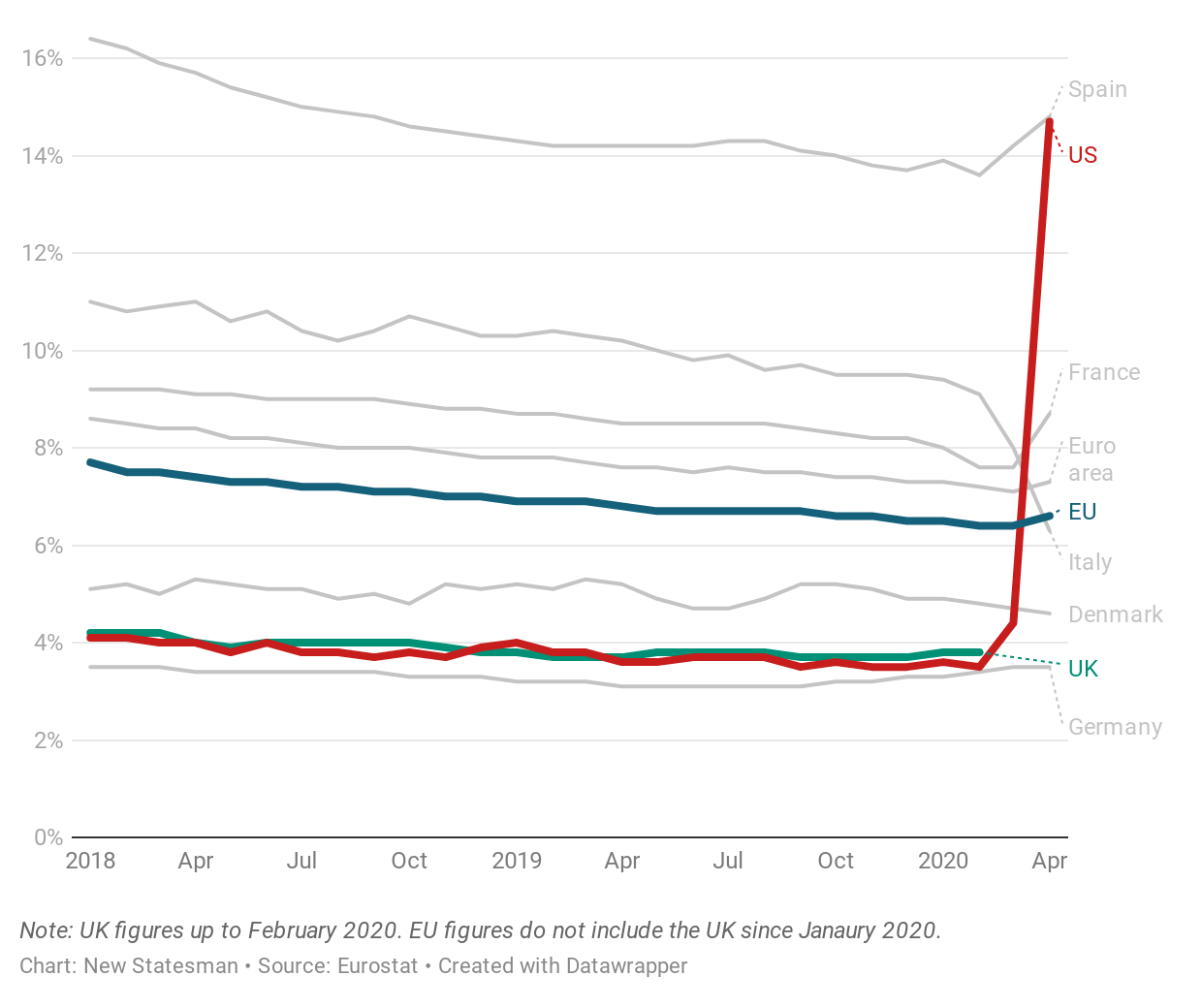 That's unemployment rates. Ours is the official U3 rate, not the U6, which no one is even talking about, but is at least double those figures because it always is. Commercial rents are 41% in arrears. Residential mortgages and rents are currently running at something like 33%, meanwhile the eviction bans are being lifted. If you have a FNMA or FNMC mortgage, you are under abeyance until August 28. You are also a quarter of the country. If you have a student loan, it's in abeyance until August 28 as well. Your extra $600 unemployment is good for another two weeks, at which point you go from an average of $985 a week to an average of $385 a week.

So if we're going to talk about office space, let's at least acknowledge that we are staring down the barrel of a truly unprecedented situation.

Let's also talk about everyone's basic strategy - test the shit out of everyone. This is important because the Trump administration decided last week that health insurance doesn't have to pay for it. My industry - the entertainment industry - has decided to divide work into "zones" in order to determine your risk and your need to verify your health. get on a bus? COVID test. Get on a plane? COVID test. Go from "zone 3" (the world) to "zone 2" (interact with people on set)? COVID test, then you wait, then you do three COVID tests a week. "Zone 1" (on set)? Wait 48 hours in zone 2, then do daily COVID swabs. Those swabs, by the way, are $100-$200 ea, assuming you clear away all the health insurance obfuscation. Let's say you're looking at one a week - you're now paying $400-$800 out of pocket to go to work. Here's another funny angle: Hollywood also wants all employees to sign a sworn affidavit every morning attesting they have no COVID symptoms. Me? I have a lingering cough... from COVID. I can't sign your damn paper. I can't work anyway. Neither can Kat - her app is gonna ask her every morning about her symptoms. And Kat signed a COVID waiver so if she's got a cough, her employer doesn't have to pay her. So Kat's going to lie about her health. I've already had two supervisors at work tell me to do the same.

And the thing is? You can't blame the insurance companies on this one, nor the employers. You can't get anything made at any real scale in Hollywood without production insurance and production insurance is fucking dead. They're still busily calculating a billion dollars in claims from March, an event none of them had on their dance card. As a result, not a single fucking one of them intends to write a policy this year regardless of whether you have COVID waivers or not (my union sends me five emails a week telling me not to sign any COVID waivers, and telling me to immediately contact them if I'm asked to). So if you're shooting anything in Hollywood? You're doing it without insurance. And Hollywood productions are basically startups that last between 3 and 24 weeks.

The lack of "they" in our COVID response has masked a few things. We used to have "Asian COVID" which Asia and the west coast USA got and "European COVID" which Europe and the East Coast got but now we only have "European COVID". If you were doing PCR on COVID-19 for a cure, you really should be switching it up to "COVID-20" which might or might not be effective before you get to "COVID-21" because, and this is a small study, your antibodies appear to be good for about six weeks.

I'd like to see that study with an n of 76,000 rather than 76 but it bears out what some of us were forced to investigate when attempting to come up with a UV sterilization protocol for masks we were making out of furnace filters back in March. Namely, that coronaviruses provoke a truly shitty immune response and mutate a lot. The pork industry has been dealing with coronavirus disease since 2008 or so. They've got at least four different kinds:

SDCv has no treatment. It kills baby pigs. So do the other three. So you vaccinate against them within five weeks of your pregnant sow giving birth. Five weeks. That will improve the likelihood of your piglets surviving to slaughter by something like 11-67%.

There's no "they" there so there aren't nearly enough people looking at this shit. But for those of us who are keenly interested and at least mildly comprehensive of the challenges?

I can imagine a vaccine that you have to take every six weeks, and that vaccine being a condition of your continued employment. I can see employers being absolved of responsibility to pay for that vaccine. I can see "essential workers" buying and selling counterfeit vaccination records to get work. And I can see a steady cycle of the permanent underclass bouncing from job to job just trying to pay rent for their ten-to-an-apartment flophouse while us ubermensch sit in our work-from-home castles bitching that Postmates is half an hour late and when they got here they were coughing.

There is no way out of here that isn't fucking socialism. We've been really good at fobbing risk off onto individuals through some perverse sense of social darwinism but it's fuckin' over 'cuz the people who are being asked to take on the risk are not being compensated even vaguely fairly for it. And right now we're all ignoring that because Hertz stick is worth something for some reason and people think airlines are a growth opportunity but it's all so much bullshit.

Vaccines. Six week intervals. Mandated and paid for by the State. Until such a time that we've managed to engineer COVID-22 into being not a health threat. And until then, people are going to die, work is going to be slow, and the economies that don't protect the least among them are going to collapse.

If this year doesn’t break American individualism forever I don’t know if anything can.

Pretty sure this was posted earlier but can’t find it anymore: “i don’t know how to make you care about other people”

There is no way out of here that isn't fucking socialism.

That's really the end of all this, isn't it? There is no other way to ever get "back to normal", and the "normal" we get back to won't be like any normal any of us have ever experienced before.

It's Britain after WWII, to the 1980's: Austere. Stiff upper lip. Things could be worse. Have a cuppa and a tasteless biscuit and enjoy that like it was something special, because that's all you get.