This took me a long to write and I've been reflecting on it, especially lately. I don't think I particularly have had a desire to talk about Bhutan, to write about travelling. I do not view myself nor these experiences are things or places worth consideration but maybe that's been the wrong way to look at it. Maybe sharing is a friendlier, more inclusive way of thinking of the places you've been and the impact they've had on you. It's been challenging, especially, to try and direct my thoughts to the impact this trip to Bhutan and Thailand had on me because, in many ways, it's still not clear to me. But I do know there's echoes that come through every so often.

A few years ago, after moving to the Pacific Northwest, I joined a running group which sparked my love for running through a love of community. In many ways, joining this group has been a life-changing experience. Fast forward through innumerable group runs, beers after, parties, races, and I found myself close to a lot of people - including people who liked to do international travel yearly, primarily around running. From Italy, to China, to Bhutan - and back to Bhutan. After a couple of years I had saved up the thousands of dollars needed to make this sort of trip happen...and after some prodding to actually turn in my check past the deposit (I usually need this kind of gentle reminding) and a glass of wine or two in the process, I was all paid up. Passport is good, Visas accounted for, ticket from Thailand to Bhutan and back accounted for.

It's a red-eye flight in the way that you're in an Uber at 11pm heading up to SeaTac...bags are packed, first international flight in 8 years coming up. Flying is an exercise in letting go and this is no different. First flight to Taiwan, next flight to Bangkok, and then off to Paro, Bhutan. The flight was...a flight, watched some movies, read a lot, and enjoyed the free alcohol.

Departing the plane into Bangkok was awakening if only because of the humidity. Despite being mid-October highs were still verging on 100 deg F and humidity was repressive. A good way to wake up, and a good reminder that the Pacific Northwest is it's own special microsphere of weather. A friend and I figured out how to exchange currency and how to hop on some public transit to our hotel for the next two nights before heading to Bhutan. Bangkok had something of a New York City feel to it, or at least that's the closest comparison I can make even if it's a trite one. Incredibly busy, dirty, packed with Wats and spiritual sites, and armed officers all over the place. Some of the most peaceful moments I had were at night, on the hotel rooftops, watching the thunderstorms pass by off in the distance from the center of the city. 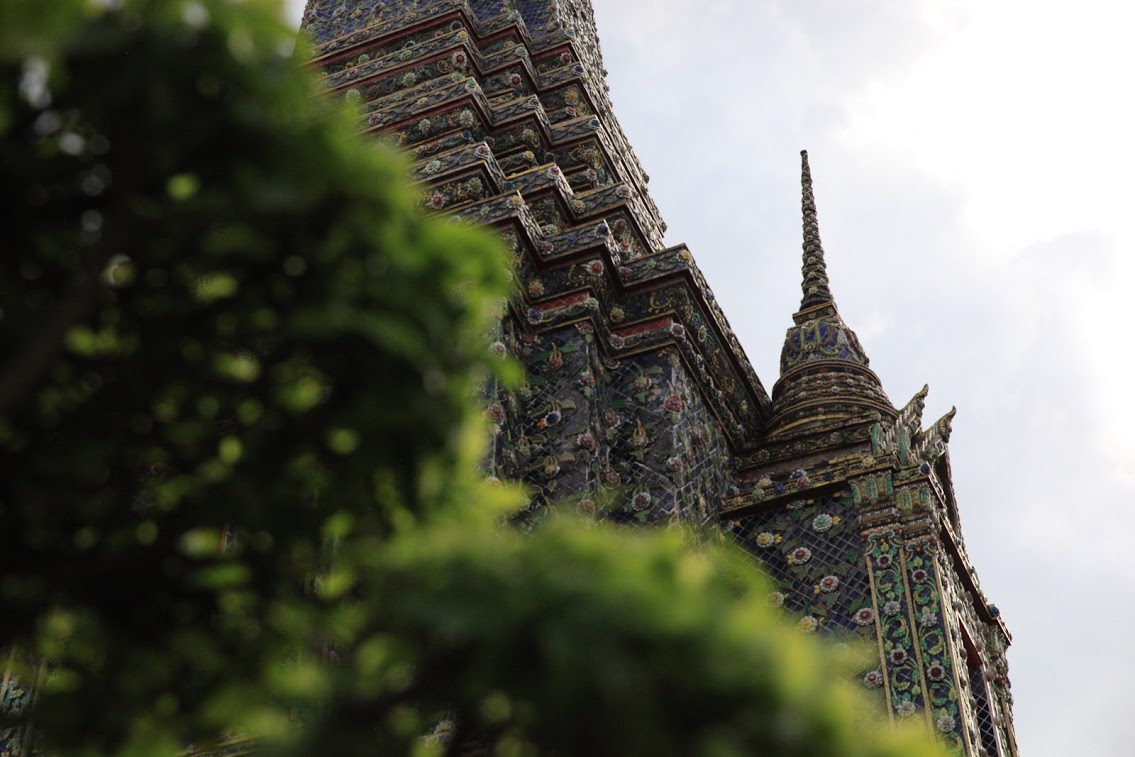 Day two in Thailand a few of us met up and ventured a few hours outside of the city to one of the less touristy but still fairly touristy floating markets - any sort of knick-knack, cheap clothing, or gadget you could want, you got it...as long as you're willing to haggle. Most importantly though, was the canal-food...so, so, so good...got an amazing curry dish and six beers for $1.50 USD. Worth it for that alone. 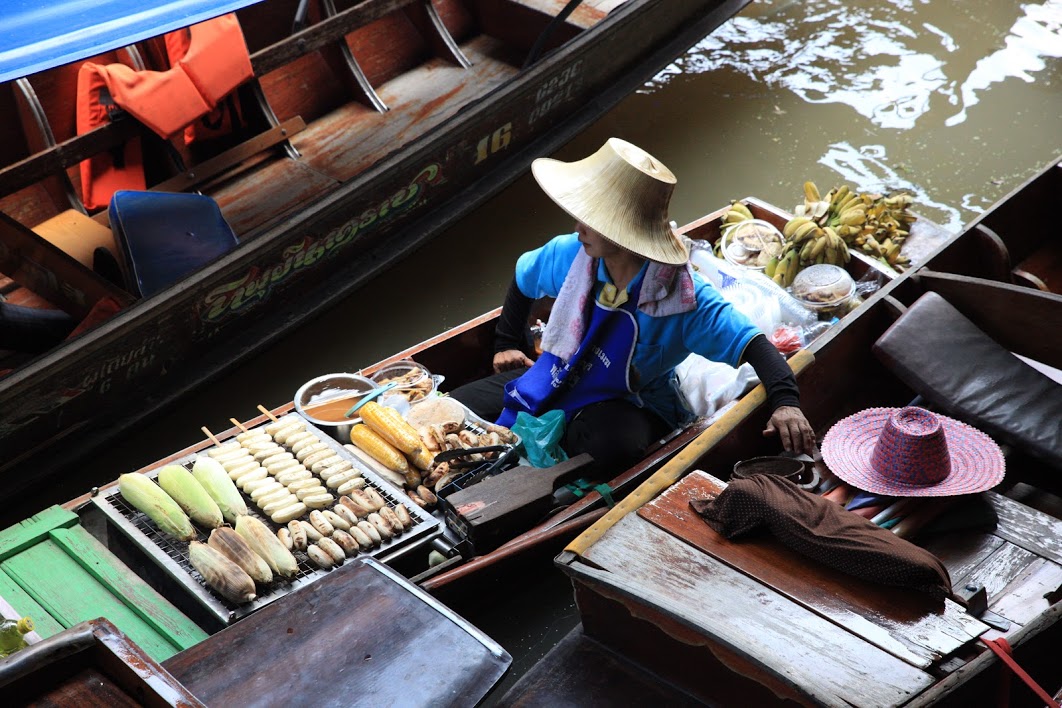 One of the few ways into Bhutan is absolutely extraordinary - a flight into their sole international airport in Paro, located at a cool 7,500 ft elevation and frequently cited as one of the most dangerous airport landings in the world. You get a clear view of the Himalaya on the descent, if you can take the time to look while you're trying to figure out if you're going to crash into a hillside on your way into Paro. I counted no fewer than three of the highest peaks in the world on the way in and it was just...stunning, breathtaking.

Also, really, I want to be clear about getting here - you can only fly if there's visibility, there's no flights after sunset, oh and there's maybe 20 Pilots actually certified to land/take-off in Paro. So...there's that.

As a foreigner and especially as a Westerner in Bhutan, you must have a guide (note that this waived for certain regional nations such as India...who coincidentally fund most of the Bhutanese military operations). The daily rate is more-or-less set by the Royal Government which is a Constitutional Monarchy complete with a King, Queen, and Prime Minister, among others.

Getting off the plane in the Paro International Airport immediately feels different - the air is crisp and clear and reminds immediately reminds me of the mountain air of Washington State. Things feel smaller, things feel slower, and we're met by our guides for the first time. There's already a connection as some of these guides are the same people who had been employed by the last trip to Bhutan. In true Himalaya fashion some sashes are provided to us, and we hop on the bus to the hotel! First day is really uneventful and a primer to the country, more than anything else. 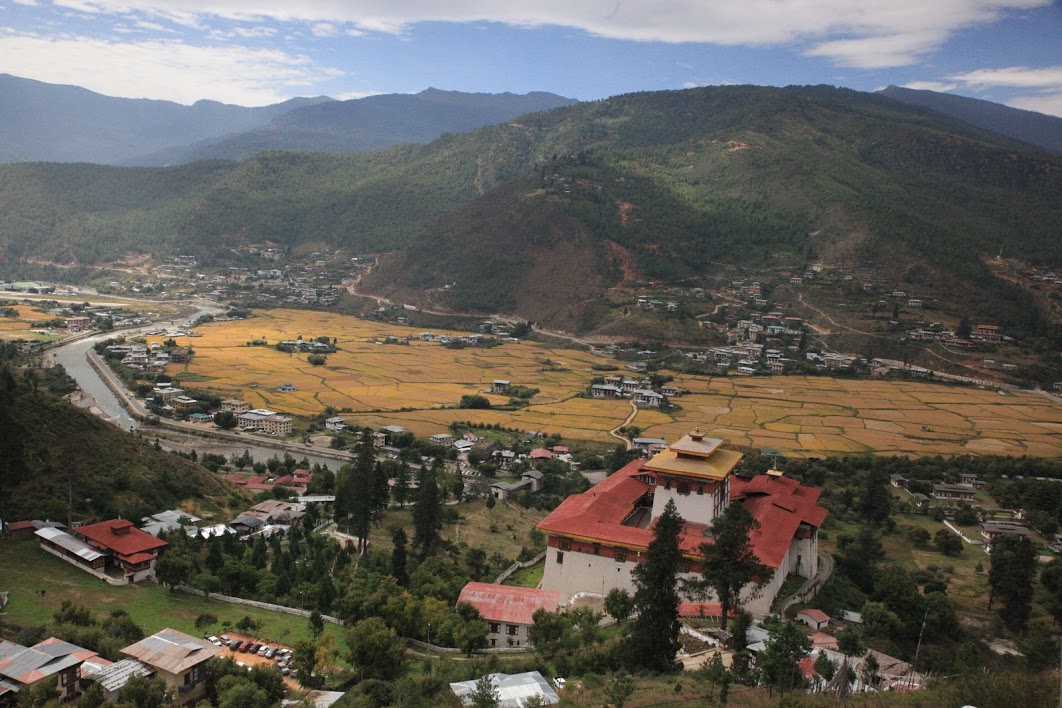 One of the most famous destinations in Bhutan is the Tiger's Nest, a sacred Buddhist site constructed in the late 17th century on the premise of a it having been the location of a four month meditation by one of the more famous Guru back in the 8th century. It's just...kind of absurd, really. Built into the side of the mountain and standing at over 10,000ft I'd wager it's one of the higher elevation sacred sites. As a country, about 75% of the population of Bhutan are practicing in Buddhism with the remainder primarily Hindu, and it's prevalent in every-day life, especially outside of the capital. 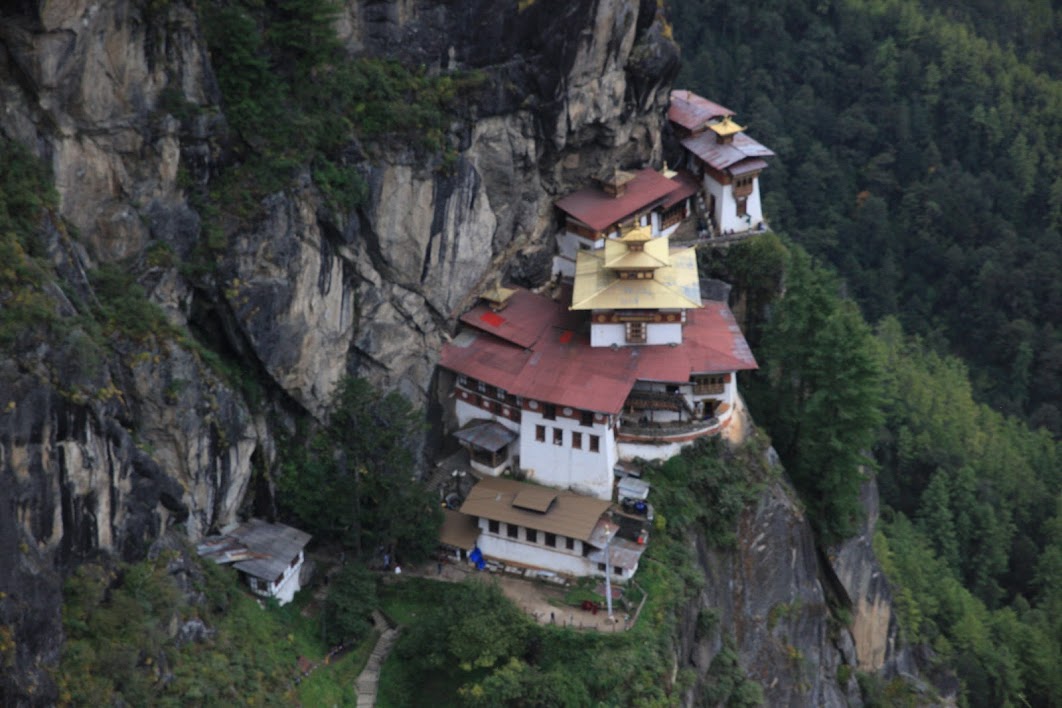 After the tour we went the long way back which took us up and around the temple, providing even better views and allowing a visit the rest of the compound. First view of some amazing wildlife as we actually saw wild Languar Monkeys in the trees as we hiked! It's interesting seeing younger schooling monks - one of the more inspirational things which can be done in rural Bhutanese society, unfortunately, they stopped playing music as soon as they realized foreigners were nearby. Another group dinner and night at the hotel - after getting up in the morning we tried a group 5k together but were stopped in our tracks by a wild bull! One of the interesting aspects of Bhutan is there's plenty of animals it's just that...most of them aren't kept as pets or fenced or controlled in any way. Bhutan is predominately vegetarian and treat animals as wild. You'll see dogs, cats, cows, bulls, you name it, roaming around the streets and for the most part they won't bother you. 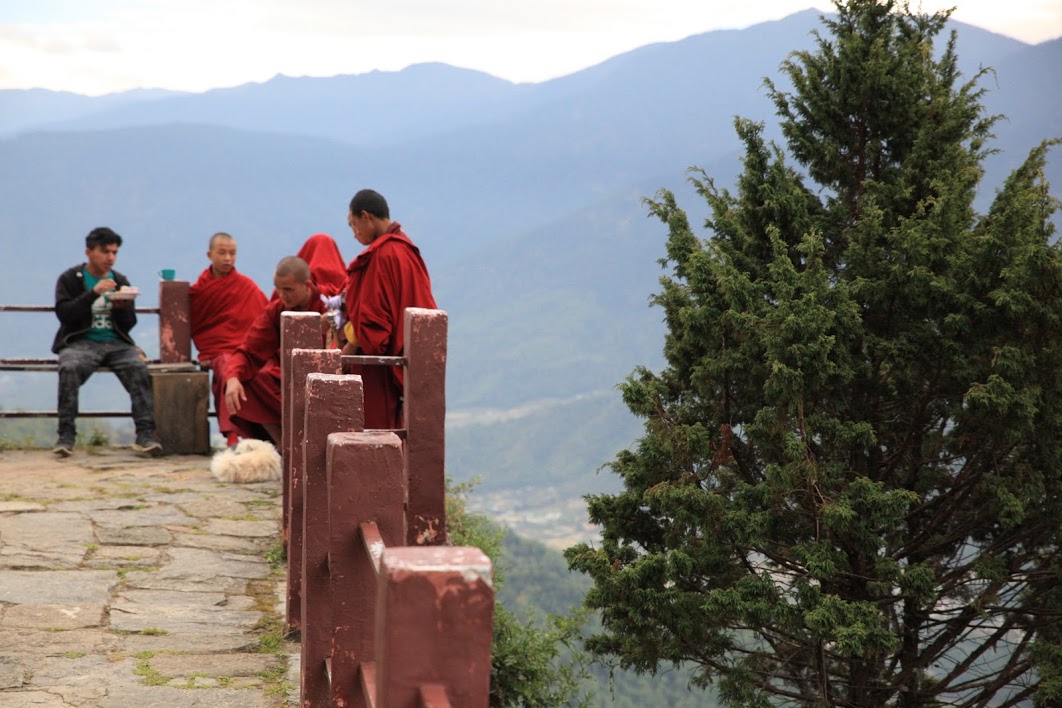 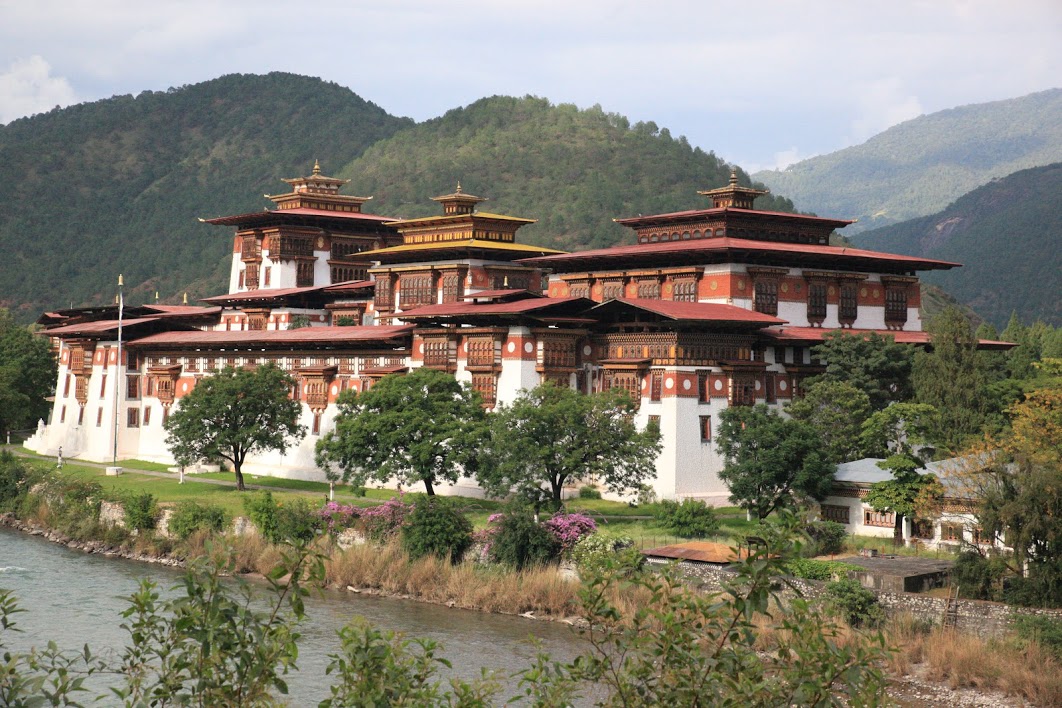 Truly a great fortress and the former capital of Bhutan prior to moving to Thimphu. It's found at the confluence of some geographically important rivers which makes it, unfortunately, prone to flooding. Also, holy shit is the locally grown rice delicious in this area of Bhutan. One of the more interesting parts of this day, though, was the fact that on the drive over (about a four hour drive), I noticed some United Nations military equipment throughout the area...still not sure what the geopolitics are which would require that. Indian military equipment - sure. But the UN?

I'm going to consider this the end of part 1 with a part 2 covering the 2nd half of this trip. I haven't really keyed in on the social aspects of this trip yet and wanted to take some time for that. Bhutan, as a country, moves slow. Like, really, really slow. In a bureaucratic way, societal way, you name it. People walk slow, there's not a single stoplight in the entire country, cars drive relatively slow, work gets done slow...the pace is just so, so different than that of western life. Need something done today? Well, we'll see. Maybe tomorrow. The stores are all tiny and usually owned and operated by a single person with their kids or family hanging out nearby - maybe some wild dogs too. Tourism being one of the biggest sources of income to Bhutan makes an interesting dynamic where you have guides at one pay scale, and drivers at another pay scale, both of which are set by the Government. Jigme and Tshendu were our guides and both were mid 20's to early 30's, part of the guide life is you have to be more educated than most. Bhutan has something like a 65% literacy rate so we are truly talking about a place which has been, for all purposes, stuck in time. Technology is limited, transportation is limited, news travels slower, there's plenty of cell phones and internet but it doesn't feel as prevalent as here in the West.

Things are starting to shift though, as they are everywhere. The younger generation wants to live in the cities, people are moving from rural areas to the more urban areas, and technology use is increasing. A degree of "westernization" is occurring though it's more cultural influence from places like South Korea and Japan and not so much the United States. K-pop...big. The generational divide, not so different compared to here. But the drive to do more, productivity, those are the things that aren't really there. It's a very in-person nation, the people support each other because they have to and that's what they value. In those ways, I really respect the way of life. It's something we could all use more of.

Bhutan is a country to explore. Lovely mountains, forest!