Benn Eifert, chief investment officer at QVR Advisors, was initially skeptical that the money behind these online message boards could sway anything. He changed his mind. “At least from the dealers”—the middlemen—“they’ll tell you in big tech names, flows are substantial, and it’s moving things,” he says. Smaller stocks are even more sensitive to sudden bursts of attention.

My sneaking suspicion is that WSB triggers some botnets in just the right way. But what do I know.

Yeah I spent a goodly amount of time last week looking at this. I don't buy it for a minute.

Members of r/WSB believe they’ve discovered a kind of perpetual motion machine in the interplay of stocks with options contracts, which offer a cheap way to bet on whether shares will rise or fall without buying the stock itself. It goes like this: Members make bets that rely on market makers, the professional middlemen who sell you a “call” (a bet on shares rising) or a “put” (a wager on a decline). Market makers, like good bookies, don’t want to go out on a limb. When taking a bet, they lay off the risk. If someone buys a call, for instance, speculating on a rally, the dealer buys stock in the underlying company.

1) When you buy a put, someone sells a call. Nobody has to actually buy any shares. The argument of Bloomberg here is that a bunch of pseudonymous nerds are forcing dealers to buy stock on public markets through options contracts, which if that were the case, wouldn't be called "options." You can let an option expire - that's why they're so cheap.

When shares keep rising, managing the hedge entails buying more stock. That’s where the Reddit set perceives a weakness. A favorite tactic on r/WSB is to swamp the market with call purchases early in the morning in an attempt to force dealers to keep buying stock. Up and up everything goes—supposedly. As the stock price rises, so does the value of the calls, often by far more.

2) But all the action on these stocks is after-hours. Not only that it closely clusters earnings calls. Always. I'm no Wall Street whale, to be sure - all my shit is retail - but I've got a pretty healthy margin account with a not-insubstantial amount of money in it and my brokerage has given me miles more rope than I'd ever want and there isn't a whole lot of after-hours trading available to me.

One user, who’d been a member for three years without posting, laid out the bull case for Lumber Liquidators Inc. and promised another pick the following morning. Call volumes in the company jumped to 71 times the previous one-month average, with shares rising 18.6%. 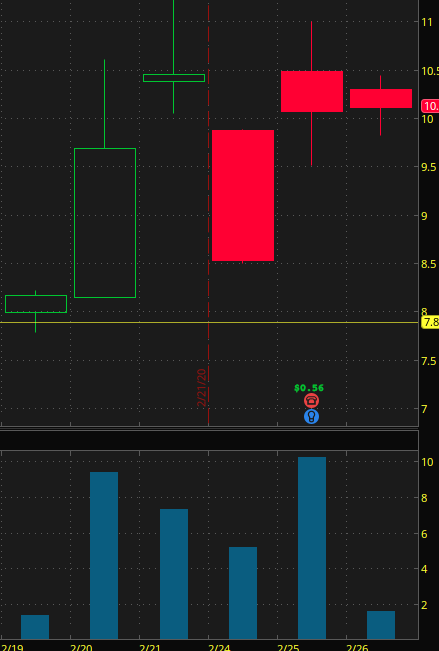 Take a look at the volumes: we're talking ten million shares a day, give or take, swimming around at around $10. Lumber Liquidator's entire market cap is like $250m. You're telling me a bunch of nerds and bots are swapping 50% of LL's marketcap?

yet SOMETHING is happening

Here's what I was able to determine:

1) All the stocks that have been jumping lately have short interest of 25% or better. That means for every three people holding the stock hoping it will go up, there's a person who has sold it without owning it so they can buy it back for cheaper.

2) All the action happens around earnings calls. This stuff isn't going up because Reddit thinks it should, it's going up because these stocks beat earnings. Granted - they went up more than you would anticipate but we'll get into that in a minute.

3) All of these stocks are in at least 50 ETFs. This matters because the incentives of an ETF are not the same as the incentives of an investor. If you are buying and selling an ETF, you are expecting a sector to go up or down. If you are buying or selling creation units of an ETF as one of the designated stakeholders of that ETF, you are day-trading the individual components of that ETF in order to make pennies which you roll up into real money over time. People buy your ETF, which gives you liquidity to HFT the minute intraday differences in the value of the equities that make up the ETF. If you own an ETF you want it to go up. If you stake an ETF you don't give a fuck what it does.

4) All of these stocks have plurality or majority fund ownership. Of the stocks I looked at (

SPCE, STMP, TSLA, FSLR, ENPH, DBX), institutional ownership ran from 48% to 95%. Even that isn't accurate - Virgin Galactic is supposedly 48% fund owned but a shadowy outfit called "Vieco USA" announced they owned 58% of it in November.

This is just the shit a nebbish like myself can find poking around in Firefox. But to start poking you have to understand how ETFs work, what incentives funds have and what a short squeeze is and it's so much more fun to point at a boiler room on Reddit.

So narrative: Nerdy day-traders are making lots of money by manipulating stock market options. You can word-search-replace a few of your articles on Bitcoin and you're good to go.

What I think is happening is that the bloat of ETFs is producing asymmetrical results around earnings calls. Having looked at the ones listed above and a half-dozen others, it looks like if you find a stock with (A) short interest over 25% (B) institutional ownership over 50% (C) ETF involvement over 25 you get an automatic short squeeze at positive earnings calls.

Simply put, your bet that a stock would go down has not played out. It has gone up instead. In order to "cover your short" you must now buy that stock back so you can return it to whoever you borrowed it from. Here's where things get interesting: over 50% of the available shares are held by ETFs that aren't interested in profiting off of that sale because they'll just have to buy it back in 20 minutes (or whatever). They have to hold a certain number of shares at the beginning and end of the day, that's their deal with the SEC. Worse, over half of what's left is people in the same boat as you: they need to buy that stock today because otherwise they have to pay for the short carry. Even worse, some of those said-same ETFs (not the ones you can trade in your retirement fund, but the leveraged ones) are also likely short and are required to buy the stock at whatever price it's at. They don't care because they're making their money otherwise - the value of the ETF is disconnected from their revenue generation in the ETF. So what you're left with is a bunch of funds that don't care how much the stock goes for because they have to cover their short and a bunch of traders who went short and are now getting crushed.

But I don't think anyone really wants to talk about the fact that ETFs are now causing equities to trade orthogonally to their inputs. Because that would be "silly."

No no. We've seen this movie.

I mean I could keep going.

1) When you buy a put, someone sells a call. Nobody has to actually buy any shares. The argument of Bloomberg here is that a bunch of pseudonymous nerds are forcing dealers to buy stock on public markets through options contracts, which if that were the case, wouldn't be called "options." You can let an option expire - that's why they're so cheap.

Dealer hedging is not quite this simple. Market makers will hedge their gamma exposure by doing whatever it takes to be delta neutral. So lets say you buy an ATM call from them with a delta of .5, that gives them a net delta of -50. If they are able to sell a put with a delta of -0.5 they would then be delta neutral, however, if there isn't someone to sell to (they are the ones making the market, after all), they will have to hedge by buying 50 shares of the underlying.

These dealers are constantly trading high volumes of options across many strikes and expiry dates. They have algorithms that will tally up the net delta of everything on their books and buy or sell shares to get them back to neutral both when the price changes and when they buy or sell options.

Since retail investors typically will sell calls to buy puts (insurance) and market makers are usually the ones taking the other side of this trade, these dealers are generally always Long delta, and thus need to Sell shares to hedge. Dealer gamma hedging will typically compress market volatility and keep prices from rising or falling too drastically.

My knowledge on this subject is pretty basic (I've never actually talked to a market maker) This site goes into more detail:

Regardless, I agree with you that this article is BS and oversimplifies how market makers manage their books. Unless these reddit guys are absolute whales they wouldn't be able to move a stock like this. It's most likely short covering causing these moves.