So we're a week out from Brexit. That's probably why I've been feeling maudlin and revisiting the Falklands war. It's one of my earliest memories of political events; I was five when the hostages came back from Iran and vaguely remember the 1979 debates but the Falklands War was in the papers a lot and I remember wondering why the hell two countries that the US considered allies would fight over "a bunch of rocks." Seven year olds don't understand "because the sun was setting on the British Empire and the Dirty War was winding down so two motheaten countries decided to rub their dicks together." 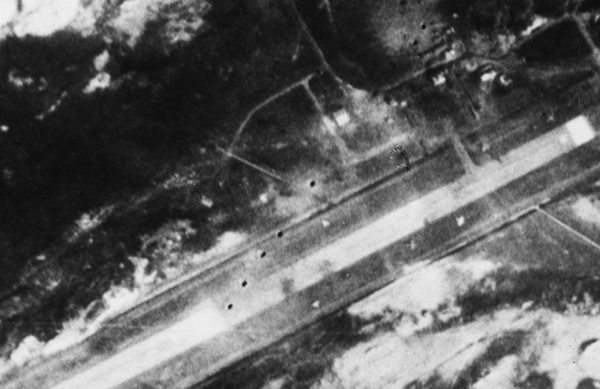 I love this picture. Those little black dots are bomb craters. Ya like how they don't line up worth a shit? The British had to

B) un-fuck their aerial refuelling probes, which had been plugged up, and find spares

C) Set these dinosaurs up to drop conventional bombs again

D) Dispatch half of the British tanker fleet to Ascension Island

And then they did it six more times. the best bit is where the Americans snuck 'em some anti-radar missiles on the DL because we were supposedly neutral and then the Vulcan was such a piece of shit that after 40 minutes of waiting around with nothing to shoot at they popped off a couple at a useless fire-control radar and killed a couple argentinian kids (the whole of the invasion was 1-year conscripts), flew back to refuel, broke off their refueling probe, had to divert to Brazil, but couldn't get the last secret missile to fire so they landed with the fucker hanging proud like a piece of toilet paper stuck to their shoe.

The military effectiveness of Black Buck remains controversial, with some independent sources describing it as "minimal".[61] The runway continued to be used by Argentine C-130 Hercules transport aircraft until the end of the war, although after 1 May only 70 tonnes (69 long tons; 77 short tons) of supplies and 340 troops were delivered, and early flights were suspended after 4 May.[53] Woodward has stated that he "fully expected" Hercules flights to continue after Black Buck One, but that he "did not care too much about that" at the time since, unlike fast jets, they were not a direct threat to the naval forces.[62] The British were well aware that Hercules flights continued to use the airfield and attempted to interdict these flights, leading to the loss of a C-130 on 1 June.

For those keeping track at home, a single A-10 hauls more than double the payload of an Avro Vulcan. And would have gotten there and back with two refuelings.