85% of all trades are algorithmic - WSJ

38% of all investors are in cash right now - Blackrock

You learn a few things following crypto, such as that a thin market is subject to much wilder swings than a thick market. When nobody's trading, every single trade moves the ticker. And this massive rally we've had, which is actually nothing but bots piling into FAANG stocks? Four in ten people with money don't trust in it enough to participate.

So y'all pile your cash in RIGHT NOW. After all, Tesla is now the #2 auto manufacturer in the world by market cap and if you just CLAP YOUR HANDS we can take it ALL THE WAY TO THE TOP, MAGGIE! 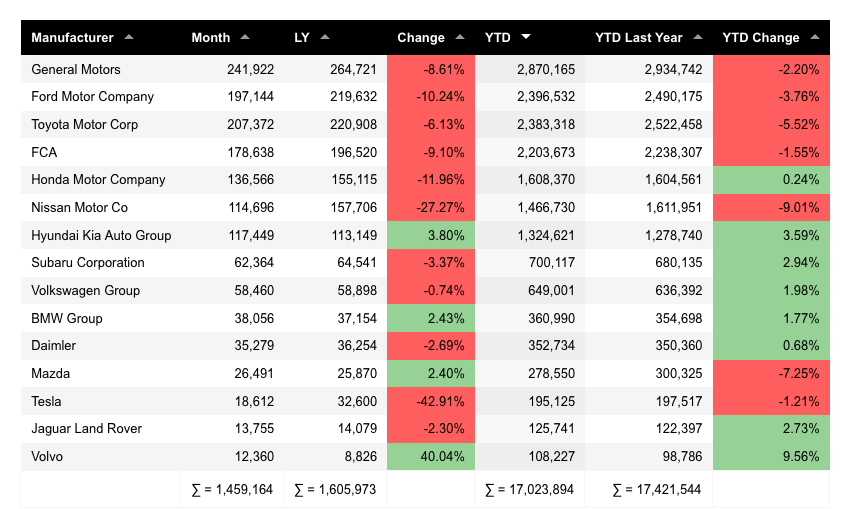 ‪Jerome Powell has much more to do with today’s $100B TSLA valuation than people buying cars. I hope the crash that follows doesn’t sour the industry on EVs.‬ 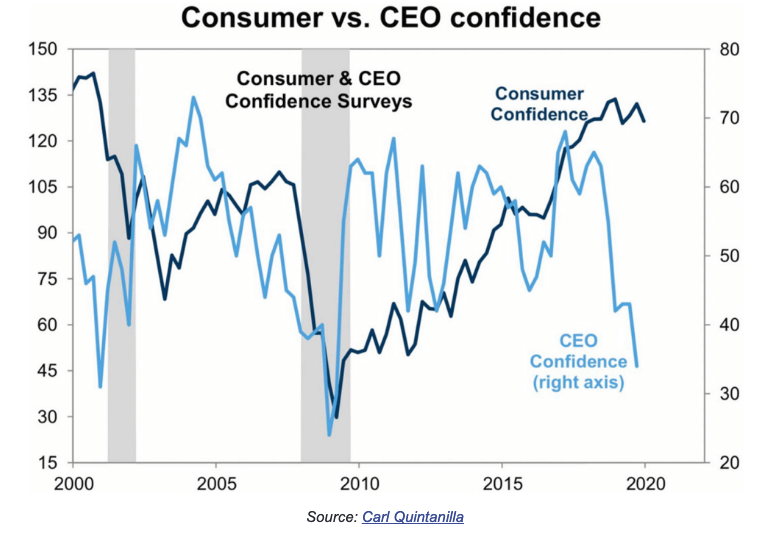 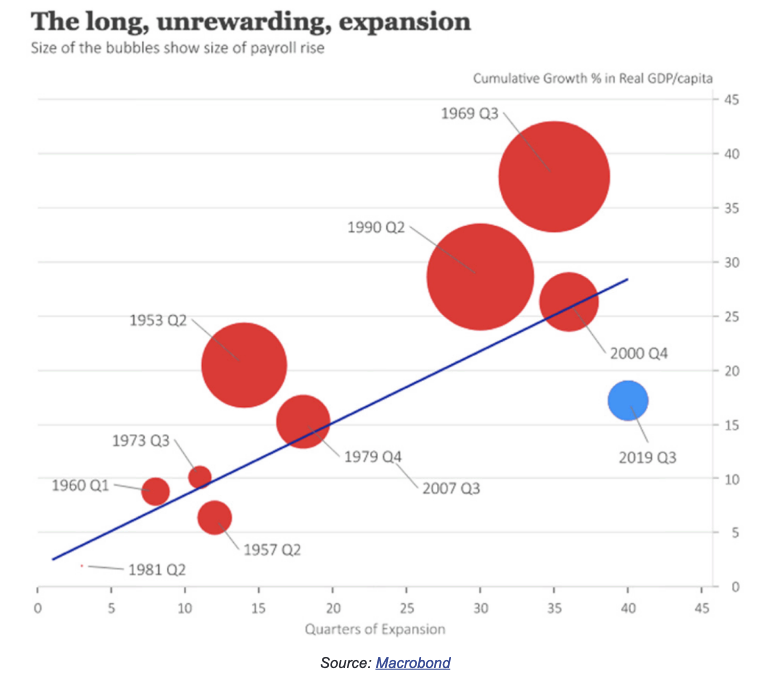 Man. There are some hard truths in that article.

If you look at the S&P 500 over the last 10 years, you might be convinced that things have grown almost 200% across all sectors. The disparity between real GDP per capita (about 17%, via your plot) and SPX can only be explained by some combination of wealth inequality and over-valuation, no?

edit: no, "only" is a bad word, which will stay up, in my shame. But things are sure to result in instantly greater wealth inequality if the correction is sharp enough, and the taxpayer funds another failout. At the same time, the stocks go poof. Even the entire bull run of the last decade has left behind anyone without an investment portfolio. Hey, if we completely wiped out the middle class, better than what we've managed already, we could really push for a perfect oligarchy, which is What We All Wanted™.

edit2: wait how are Trump tax cuts for companies not a type of bailout?

Oh, and I wish they'd gimme a scale on those wage growth circles.

Out today: Trump and Entitlement Reform, in which Trump opens the door to cutting Medicare. Here's the best bit, though, from author James Freeman:

The good news is that the United States may finally have a President who is interested in restraining federal spending.

"Who the hell cares about the budget? We're going to have a country."

Ha. Can't make this stuff up.

If Trump cuts Medicare, he'd be essentially killing some of the 'boomers who voted him into office. A part of me wants to cheer, but these are people. Suckers, but people. And I never expected to get social security, which is fine, because I genuinely don't think I'll ever wanna retire anyway.

The disparity between real GDP per capita (about 17%, via your plot) and SPX can only be explained by some combination of wealth inequality and over-valuation, no? 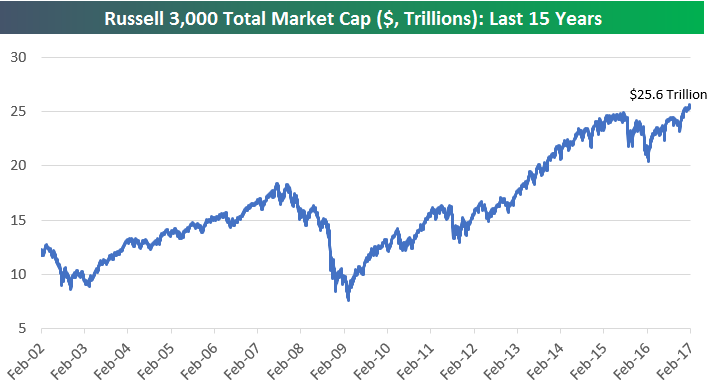 The federal reserve has added $14 trillion dollars in liquidity to US markets. This in turn has led to a $15 trillion dollar increase in US markets. So, ammy - anybody give you any trillions in the past ten years? No? Well that money went somewhere and that's one of many reasons everyone is mad.

So, ammy - anybody give you any trillions in the past ten years? No? Well that money went somewhere and that's one of many reasons everything is utterly dystopian.

Fixed that for you.

I can't find anything more recent than what you've posted that uses nominal GDP (presumably because correcting GDP to "nominal" status takes time), but the fed kept injecting more money after 2011 (I know you know). By my rough estimate, it should make today's fed balance sheet percentage of nominal GDP around 27 or 28%. That's insane! We have eclipsed the Great Depression, from some reference frames, in terms of propping up the "free market", but consumer confidence is near record highs.

And it is a "Republican" president, traditionally the party famous for its laissez-faire ideology, arguing for negative interest rates and tariffs? If Trump intends to make up deficits by dropping Medicare, that's at least about $500 billion recouped every year, over the next 75 years. Indeed, he'll casually tell you himself that he plans to cut entitlements during an interview laced with other breathtaking moments. If you start the video in the Daily Beast link below @03:25 and stitch together his broken phrases, Trump sure seems to reveal that he's already planning to ditch entitlements "later this year", presumably just after his re-election, but you gotta listen closely:

Can you imagine a scenario that would cause the amount of QE to approach the total national debt? Genuinely curious if that's possible, what it would look like, and the repercussions, like if it could potentially undermine the entire philosophy of credit.

The number you're typically looking for is "debt to GDP ratio."

The number that starts to make economists shit their pants is 100%. However, they're basing that largely on numerology and bad excel spreadsheets.

The "consumer confidence level" is a funny one. It's not measuring "how is the economy doing" it's measuring "how do you THINK the economy is doing". Presume all 5,000 surveyed work for the Fed. Your consumer confidence interval is likely an accurate measure of... well, how well current market conditions align with their personal economic philosophy. It's never going to be a great estimate of what's going on - it's a great estimate of what the country thinks is going on.

I mean, the news tells you every time the S&P closes half a point higher. Companies are topping a trillion dollars in market cap. Jeff Bezos has a fuckin' spaceship and Elon Musk is banging Grimes. Of COURSE the country's doing great! As Trump promised, we're getting sick of winning. And if you, personally, are in the shit that means it's you, not the economy.

Remember - about half of the same people asked about the economy think Obama is a secret muslim.

A number of economic pundits have been throwing about the phrase "debt jubiliee" since 2009 or so. Their argument is that everything will be fine so long as we "forgive a bunch of debt." Sounds lovely. It also means "cut entitlements". It also means "renege on pensions and social programs." It's funny how by using the phrase "jubilee" you can feel fine about taking away grandma's cat food.

By the bye, I didn't really understand Japan or what an asymptotic debt-to-GDP ratio looks like in practice. Then I read Showa. I now misunderstand it slightly less. You know what supports spending programs like that? Totalitarianism.

One of the reasons I'm behind on economics, and why I'm still continually wary of it, is exactly because of the coupling between human perception and economic conditions. I say "coupling", but the disconnect is important as well. Physics is so much more appealing to me than trying to understand anything to do with human behavior.

We can't save us from ourselves. Like you, I'm obviously convinced that the market is cyclical, but I've been worried about a crash for about four or five years. If I'm right, and we're three-ish years overdue for a downturn, I'm probably not gonna wanna say "I told you so" when the rally ends.

There's a grad-student-run pub on campus. One night I'm out in the beer garden with my classmates, few drinks in, and a couple of young businessmen sit down, ask us a few questions, and offer us six figure jobs at Merrill Lynch to do quant shit. We laughed, thanked them, and left. It's not that I think all business and economic-sector jobs are evil, and I'm better than them. OK, no, sometimes that's part of it, but it's more about the fact that I have no interest in that sort of work. I would lose a major sense of purpose. I'm supposed to do science.

I took an interest in 2008 when I realized that the chucklefucks in business suits had dramatically impacted my life in 1987, 1999 and 2007.

Having an economics professor hold up a 1,000,000DM bill from the Weimar and tell us that Alan Greenspan was the most important person in the world didn't help.

I'll say this: recognizing that the economy is run not by people who are smart but by people who have had a run of luck gives you more tranquility around the Trump administration.

The new FICO changes reflect a shift in U.S. lenders’ confidence in the economy, which has been expanding for more than 10 years. Consumer loan losses remain low compared with during the last recession, but consumer debts are at record highs, with many Americans forced to rely on debt to help fund their everyday lives.

Lenders in recent years had asked the credit-reporting and scoring companies to help them find more borrowers. But lenders are also trying to balance the need to expand loan volume with a rising concern about the longevity of the economic recovery and whether credit scores are making some consumers appear more creditworthy than they are.

“There are some lenders that see there are problems on the horizon in terms of consumer performance or uncertainty [about] how long this [recovery] is going to go,” said David Shellenberger, vice president of scores and predictive analytics at FICO. “We definitely are finding pockets of greater risk.”

Consumer confidence may be at an all-time high? But confidence in consumers is so low that FICO is rejiggering their numbers.