Such a city depends on a responsive, legitimate government, and on devices that are open and transparent, freely auditable and secured through widespread scrutiny of their inner workings. It is a city and a technology and a government oriented around its people, designed to treat people “as an end in themselves and not as a means to something else”.

WHY DOES BORK HAVE TROUBLE WITH A RIGHT TO PRIVACY?

There were few classes in high school I enjoyed and fewer teachers I felt competent. My history teacher was an exception. Robert Bork had just been borked and, although discussion of current events is decidedly taboo amongst the youth and particularly their radical, liberal teachers, she reminded us all that the principle objection to Robert Bork was that he held the Constitution contained no right to privacy:

A hotly contested United States Senate debate over Bork's nomination ensued, partly fueled by strong opposition by civil and women's rights groups concerned with Bork's stated desire to roll back civil rights decisions of the Warren and Burger courts, and his opposition to the federal government's right to impose standards of voting fairness upon the states. Bork is one of only four Supreme Court nominees to ever be opposed by the ACLU, along with William Rehnquist, Samuel Alito and Brett Kavanaugh. Bork was also criticized for being an "advocate of disproportionate powers for the executive branch of Government, almost executive supremacy," as demonstrated by his role in the "Saturday Night Massacre" during Richard Nixon's Watergate scandal.

During debate over his nomination, Bork's video rental history was leaked to the press, which led to the enactment of the 1988 Video Privacy Protection Act. His video rental history was unremarkable, and included such harmless titles as A Day at the Races, Ruthless People, and The Man Who Knew Too Much. The list of rentals was originally printed by Washington, D.C.'s City Paper.

Here's the thing, though. A right to privacy wasn't Bork's bag at all. He didn't really give a shit. Yeah, he was an originalist (or Wahabi), but really? The whole reason anyone gives a shit about Robert Bork? 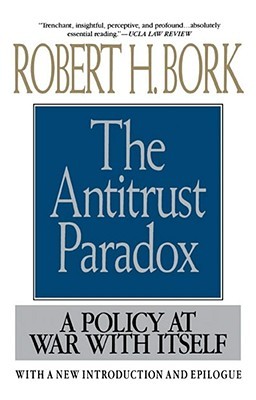 Bork is the guy who argues that monopolies are A-OK, nay, they're fuckin' great, and Robert Bork's thinking is what lets Amazon wipe out Walmart after Walmart has wiped out everything with a market cap under $100m. Robert Bork's originalism largely serves his corporatism: no, you're not guaranteed a right to protect your heart monitor data because Google has a right to use any data they collect.

It's worthy of note that if you ask Mitch McConnell "when were you radicalized?" his answer will be the confirmation of Robert Bork. We have Brett Kavanaugh because we didn't get Robert Bork in 1987.

The world will not change until privacy is recognized as a fundamental human right. The minute you say "citizens and non-citizens alike are allowed to choose what information they share with the government and with other citizens and corporations" and the data collection will stop

If you start this Vice video a little after 6 minutes in, you're treated to a discussion about the founder's choice to name a facial recognition surveillance software "Skynet", a decision made apparently without a shred of irony.

It's almost like cultures less likely to instill critical thinking and introspection are easier to exploit. Or something.

What I mean to say is that American culture? It's perfect. Currently no issues.