[F]or me, and I suspect for countless others like me, the threat of suicide isn't like being carried over a waterfall — it is like living in the ocean. Not as sea creatures do, native and equipped with feathery gills to dissolve oxygen for my bloodstream, but alone, with an expanse of water at all sides. Some days are unremarkable, floating under clear skies and smooth waters; other days are tumultuous storms you don’t know you’ll survive, but you’re always, always in the ocean.

A tip - increasing jokes about suicide are a definite sign that somebody is getting close to the edge. Used to see it all the time at work. It seems innocuous, like yeah of course these millenials joke about "wanting to die", but usually it's a silent cry for help because nobody is allowed to say how they're really feeling. Every time I've confronted somebody about it it turns out yes - something horrible just happened in their life and they're teetering close to the edge.

But that's humans looking out for humans, not the horrible impersonal clinical nightmare of "therapy." If therapy has ever actually worked for anyone, please let me know. How can the triviality of big 5 psychologists help you when your issues are birth, sex, and dying?

And I used to get this all the time too, but it's never been a consistent thing. High school is, generally, an engine for the production of suicidal thoughts and actions. But that's an anomaly, and a function of living in a prison system where you're told where to stand, eat, and shit by bald middle-aged white guys with walkie-talkies and no future. A.k.a. institutional goats.

Beyond that though, I've started to notice two problems, both 1) the epidemic itself and 2) a kind of cottage industry of mental health professionals and self care bloggers who I think are helping exacerbate the problem. They are almost certainly incapable of relating to the average person, and mainly because they don't tell the truth. Mental health bloggers bother me because it seems like they could benefit from spending a little less time thinking about their own mental state. It becomes an identity for them. If you have a hammer, everything looks like a nail. And disorders and diagnoses can pile up when really all you need to do is look and the mirror and say hey, apart from a biological need for Prozac, of course I feel discombobulated, I'm basically a sack of meat. I used to be a kid, now I'm an adult, pretty soon I'm going to be a senior citizen. That's just the central crisis of biological existence. She was a senior editor at BuzzFeed. She has some type of cushy journalism job. Social exclusion? Financial instability? Existential angst? Knowing you're going to be doing hard work the rest of your life? Look around your city and look at all the old dudes working shitty jobs. Driving UPS trucks, serving you cinnabons, building houses. She's clearly doing better than them. 99% of people on this planet work shit jobs. But most therapists have their heads so far in the sand they couldn't possibly help anyone. Think someone who's self identifies by their astrological sign is going to help us out of the maze?

5) understand that using psychedelic drugs will turn you into a burnout and will not give you cosmic wisdom. It's not a myth that people go over "the edge". His name was Brendan T. and has been unemployed since he was expelled from your high school.

6) accept that your dad likely witnessed the moon landing and you have no right to even think about eliminating yourself from this great opera.

Get your shit together lady and stop making it worse. Attach yourself to this game and don't fear death.

It's interesting. My first instinct was to resent this woman's selfish take into my own personal shithole as well, which had me looking up suicide rates per capita over time and suicide rates per state because I mean, I graduated with about 130 people but it would have been 134 if it weren't for suicide (would have been about 140 if it weren't for drunk drivers but whatever). I never got to meet my uncle because he couldn't handle Harvard. My grandmother had had enough of my grandfather by 72. I've stood on that precipice and wondered if I had the guts but we don't need to talk about that right now.

My experience hasn't been one of jokes. It's been one of "things were fine" then "there was a crisis" and then "they were gone." Suicide is, in many ways, a stoic's disease: 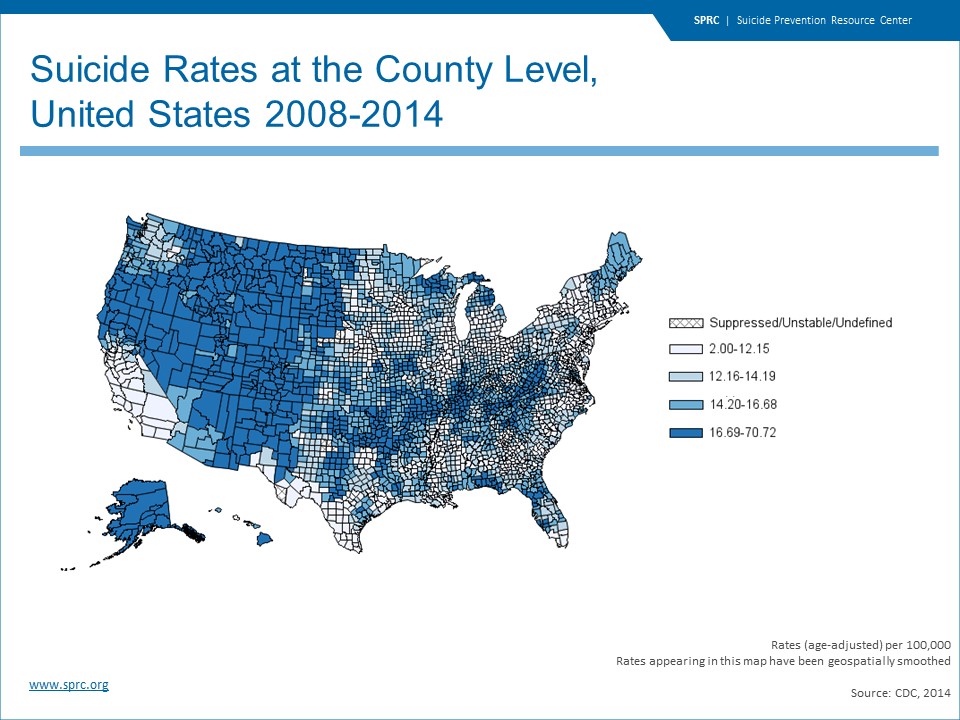 It's that thing you do when you don't think you'll be missed. I know as I've increased my social circle, as I've founded a family I value deeply, that I haven't had a suicidal thought in decades. More than that, I've gotten the odd "that time you were nice to me when I moved to town 20 years ago kept me from killing myself" Facebook message more than once. I've gotten messages like that on this site. I don't have any data going the other way but my experience has overwhelmingly been one of the right attention at the right time keeps people alive. Doesn't even have to be kindness - I've gotten a couple "you pissed me off so much that I decided not to off myself" messages. Just knowing that "the ocean" isn't empty seems to make it survivable.

I suspect rates are skyrocketing for non-hispanic whites because their social fabric is more torn and frayed than since the Wild Wild West.

Therapy tends to work if you've got a specific problem to solve / develop coping mechanisms for, but it sure isn't everything to everyone.

"Get your shit together lady and stop making it worse."

I have a partner I trust with most everything and close friends and chickens who love me unconditionally (as well as some handsome lab plants I am very proud of). I've got a degree in a technical field and another on the way. I have hobbies and projects and students to mentor. I have a lot of things to live for.

There are days when the list of projects is more of a list of failures, the love and support from people close to me is an obligation for them, the work is an exercise in proving how incompetent and stupid I am. And I wake up with the knowledge that I should not be alive, that I am wasting all the effort and resources spent on me, that I'm a burden that can barely manage to feed herself. I go sit in my lab and try to focus but I can't really and nothing significant gets done, I go home and sit on the couch and stare into space and try to will myself to act a little bit like a human so the people around me don't worry and wait for the time to pass until I can sleep. I look at my week-long pill box and think about how much time is progressing and I am not.

Thanks for writing. I had a period of self-reflection recently where I realized I was being a huge asshole and one of the things I came back to was this post. It's more of a reflection of my own terror - I've lost several close friends to suicide and a few people from my graduating class. Kb's comment is accurate, they were suddenly gone. So I was upset reading "I don't really want to be alive right now" - because the people I know that have actually crossed that barrier never talked like that.

But at the end of the day I have no right to be tearing into her. It's shitty. It's making the world a worse place to live in. And having a thick skin means nothing because even for me there was a time of life where an unkind word might have been the difference between life and death.

The passage of time scares the hell out of me too. I had certain life experiences and now I feel perpetually unsatisfied with most things. I feel like I want everything but I know I'll never get it. So I'll always feel inadequate. And it's the little things, like going to public spaces and noticing you're no longer the youngest person in the room...

I hope all is well and I'm sorry.

Hey, no need to be so hard on yourself. I see a younger me in the things you wrote, and certainly sometimes we all need to practice getting in front of disasters before they spiral out of control and make things even worse.

Things have been looking up over here lately. Hang in there. We're here for you.