This was my first marathon ever, and with numerous injuries preventing me from following or even finishing out a proper training cycle, I lowered my goal of < 4:00:00 to < 4:20:00 which seemed attainable but a challenge, all things considered.

So, yeah. I had hoped to follow Jack Daniels 18-week plan with two quality workouts a week, and was following it for a month or two, before my ankle blew up from a previous injury trail running last year. That resulted in two months of light running, physical therapy, and knee pain on my opposing knee due to overcompensating for the injury. On the bright side, my climbing improved greatly in this time, but it was horrible for my running. Once that finally got to a point in running, I was able to pull together a half-marathon PR of 1:50:15 in a very, very hilly course but was still pressed on time. The result was not following much of a plan, and trying to get as many miles in as possible. My longest run ended up being 18 miles, but fortunately I had some great cross-training over the past month in backpacking and basic mountaineering and managed to string together about a month worth of > 50 mile weeks between running and hiking.

All kitted out. A lot more thought went into this than any half-marathon I've ran. What extra clothes might I want (forecast was calling for showers mid-morning, an improvement over thunderstorms from earlier in the week!!!). How much food, so on. It was much more strategic. I was very, very, very anxious for this race given that it was my first marathon, and feeling under prepared because of the training issues. Can I really run a marathon? Will I end up injured at some point during this race? A lot of what-if's were racing through my mind, so I ended up putting on The Great British Bake Off at around 9pm last night after a night of pasta with cabbage, and way too much other food...finally fell asleep at 11ish pm, much later than I would have liked given my 3:45am wakeup alarm. 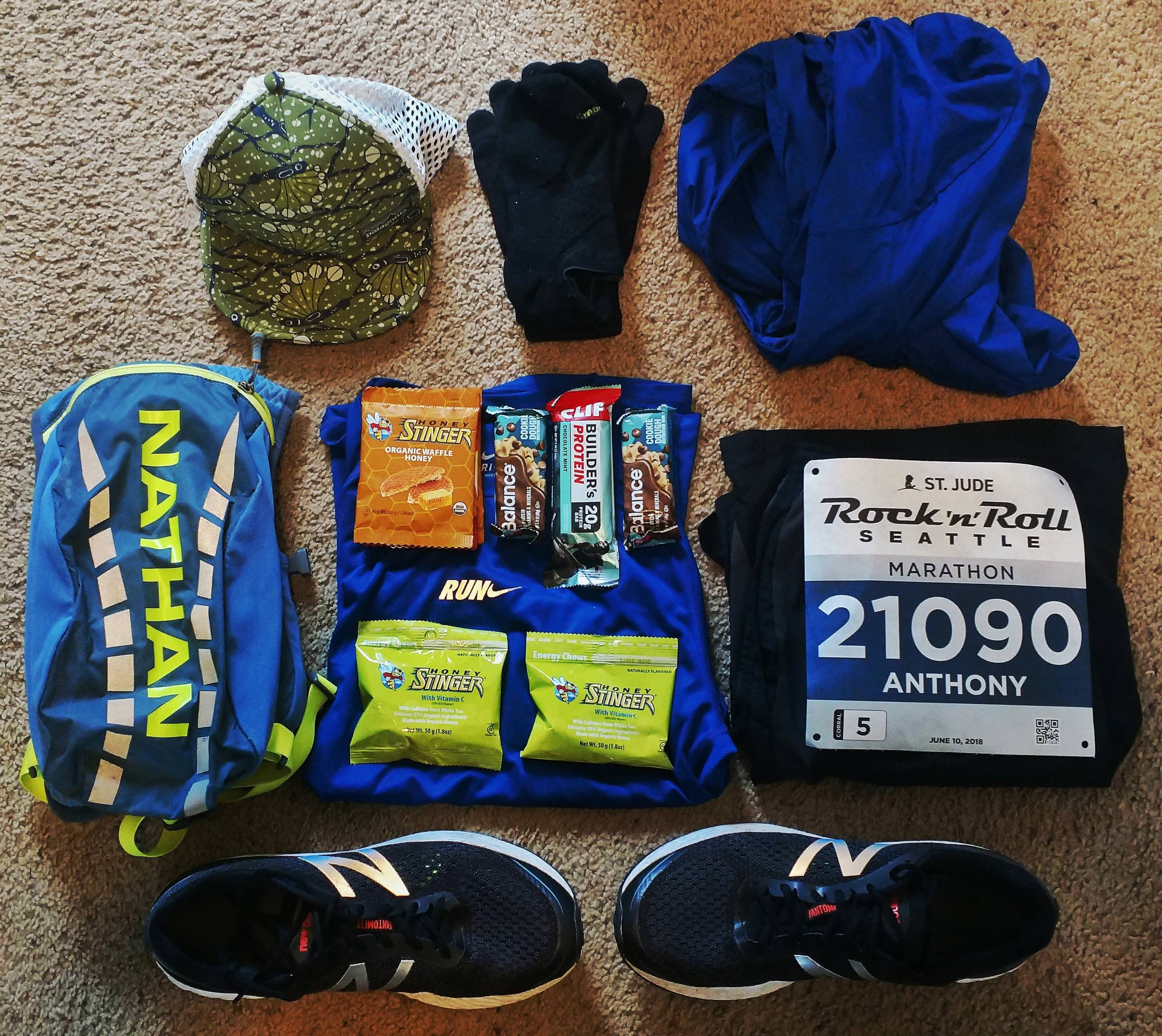 Drove up to Seattle, hopped on the monorail, nothing exciting. Ran into another runner I knew who was also running the full marathon, but not even close to his first. Ate a banana, spent some time in the bathroom. Went to bag check. All the little things that add up over the course of the morning. It was a beautiful morning, I couldn't have asked for a nice one. 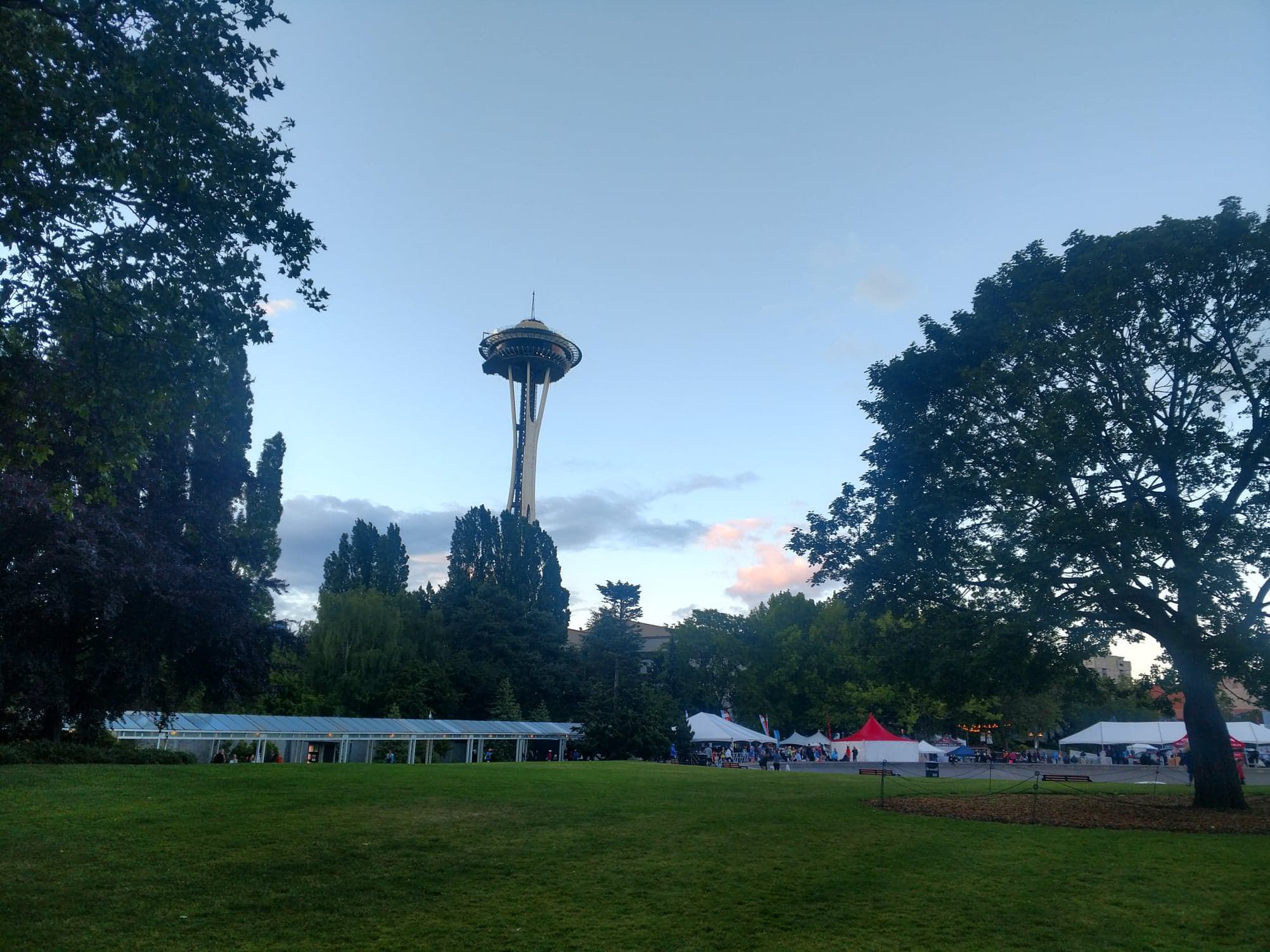 Things went way, way faster at the start this year compared to last year in this race. Corrals were smooth, I was happy with that!

Highlights from the first 13.1 miles:

1. Trying to eat a crumbled Stinger Waffle at mile 8ish. Took one bite and half of it ended up in my mouth. Choking hazards are real, people!!! Took me a handful of miles to recover from that incident and try eating more food. This also happened to coincide with a "really fucking steep" two-block stretch of hill that most people walked. I didn't, because holy fuck I've been walking up mountains for months now.

2. Mile 6ish, my favorite sign. "Stranger with Candy" as a lone lady with a candy bowl watched the spectators, I can only assume she was looking for somebody. I didn't take any candy. Other signs included numerous "You are running better than the government" signs. Seattle...

3. Splitting off from the half-marathon runners. This is where the pack really thinned out.

Highlights from the last 13.1 miles:

1. Running on the viaduct before it's torn down! That was a really cool experience, minus me really, really, really needing to use a port-a-potty during a five (!!!) mile stretch of no port-a-potties. That stop added probably three minutes to my time.

2. Eating more food without choking on it.

3. Seeing my friends for the first time with their signs and bells and whatever else. I didn't actually read the signs at the time, but I saw them!

4. Seeing a good friend of mine who was running the race with me on an outback stretch, she was a good two miles ahead of me at this point and kicking ass! This would have been the 14 (for me) and 16 (for her) marker. Also, seeing another runner I know at the mile 19 (for me) and 25 (for him) marker. He's really fucking fast and beat me by an hour.

5. Running up near the zoo! As soon as I hit trail I started passing lots and lots of people. It was rejuvenating and just in time. 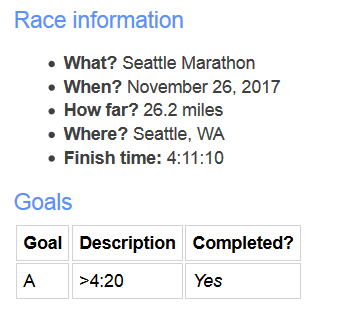 About 1,500ft of gain over the entirety of the course, and a race I'll never forget. I feel like I ran it fairly conservatively, and feel like I can run tomorrow without much issue. Maybe a bit too slow? The long split at mile 23 coincides with continuous uphill, and another port-a-potty stop...stomach wasn't very agreeable this morning, unfortunately. Overall I'm happy with how I ran the race, the intent was to match splits across the first and second half, and I did a damn close job of that despite the second half being much more sustained hills than the first. I nearly caught my friend, too, closed a twenty minute gap all the way down to a four minute gap because of the sustained performance. A lot of parts of my body ended up with minor pains and annoyances over the course of the race, including my arches which was a new experience, but nothing lasted very long. The arches were an issue for the last three miles, for some reason, but didn't hamper me. The last mile we finally got those showers, which actually rained pretty hard so I was nice and wet at the finish line. A true Seattle race.

First off, a big thanks to wasoxygen, WanderingEng, and some family members and friends for watching this all unfold in real-time. Hopefully you all enjoyed that and that the app was tolerable. Overall I came in the top 33% in this race, and placed almost exactly 50% in my division (gender and age). For gender, I was slightly above the top 50%. I'll take those results for a first! I ate a lot of food today, drank a fair amount of beer, and stretched/foam-rolled/ankle strengthening exercises. I'm tired, but on the verge of signing up for this race again next year...and taking a good luck at wear on my shoes!

One marathon down, who knows how many more to go. What a day...

It was looking close at the half, but you delivered quite the kick in the final miles. I don’t think I’ve ever finished a long race and wanted to do it again, not for at least a week anyway. Congratulations on a great run!

Definitely saw the light at the end of the tunnel, heh. The sub-9 minute miles in the halfway marks surprised me, too.

This is awesome ButterflyEffect, congratulations. I have been following your running for a while now. This is a big accomplishment. Shouting out to SeanBot who is about to run his first marathon.

Thanks!!! It's progressed a lot in the past two years, amazing to look back on things. Hopefully Sean see's this, I'm excited to hear about his first marathon!

Side note... I've found the Daniels 2Q is quite difficult, with most key workouts asking you to not just run long mileage but to put extended M/T segments in the middle of those long runs. I've attempted it but even maintaining the M pace segments after previous days of regular distance training is asking quite a bit. There's a lot of reasons most plans simply ask you to run easy on long runs.

Nowadays I just focus on banking high mileage at an easy pace and getting in one quality non-long workout per week. A little too Lydiard for most people's tastes, but it works for me.

Let there be rock!

Big congratulations! What did you take for food? In mine, I had Gus and Shot Bloks. Shot Bloks didn't work well, and man cannot live on Gus alone.

I was watching via the web, and it live updated great. I'm happy that your slower split late in the run was a porta potty. That's about the point where a lot of runners, including me, start to struggle. You had a great push all the way to the end.

1500' is unreal. I think mine was half that. Fantastic performance on a challenging course.

GUs do horrible, no good things to my stomach. A theme is that I have a sensitive stomach. Nutrition today involved the pre race banana and coffee, and during the race: Balance Bars, Honey Stinger Waffles, and Limeade Stinger Energy Chews. Plenty of water and Gatorade as well.

Thanks for the congrats, badge, and watching in real time. I definitely felt aware of that a couple of times during this race. This course was honestly harder than I thought it would be, there was no end to the hills in the second half.

One more nutrition question! Did your Saturday night meal work well? I sometimes eat sort of light the night before, and I think I maybe need to do more pasta.

Your report has me itching to do another, even knowing I'm signed up for Milwaukee just four months away.

It did! I ate too much though, and ate too much throughout the day. Plenty of pasta, threw in some cabbage on the side, and had one pint of beer with some friends around 7:30pm.

Milwaukee is a full, right? What's it even like there in October? Decent running weather?

Yep, it's a full. It's point-to-point. They bus you north to the start and then you run due south and average downhill to downtown. Weather is usually mild, neither hot or cold, and if there's wind it's usually a cross wind. I picked it as being nearby, a change of scenery, and famously good for PRs.

Thanks for sharing your experience! I'm hoping for personal improvement this fall. I was happy with my finish but think I can do better.