This seems like an opportunity begging for both sides to pick what they want from the event and solidify tribal allegiances. Exhibit A) Charles Murray is a cantankerous son of a bitch, an old school traditionalist who thinks what'll help the have-nots is a heaping pile of personal responsibility. Want proof? Look at how well white families have performed in the past. QED. Exhibit B) Liberals are pants-on-head retarded and can't even listen to someone before rioting and injuring a registered Dem faculty member of one of the most liberal colleges on earth.

I've read a few things by Murray, so I'm 10% qualified to speak on my disagreements with him. He's got a few good ideas. Some bad ones, which unfortunately have a lot of currency in conservative social circles. That said, there is still an unproductive tendency for (some/a lot... not sure the proportion) college-aged liberals to boil over red with anger and shut down all non-emotional faculties when confronted with conservative viewpoints. I understand that there is an incalculable cost associated with the unchecked racism that runs through the country's history, but Charles Murray was just vindicated for the rest of his life and I don't see how that helps.

edit to add: I've been thinking about how little I've managed to do in the wake of Trump--excluding all writing on the Internet as that has next to zero real world benefit--and I'm really dismayed. I have excuses like that I'm busy (college, buying a house) but they feel cheap. And when I think about the trapped feeling that most of my peers feel, rioting against the system and protecting the disenfranchised seem less condemnable.

I have no sympathy for the delicate flowers of academia.

The story of higher ed since the time of my graduation has been more expense, less autonomy, dimmer prospects. Universities have become ever more of an essential for high school grads if they want any kind of a future, but that future has never been bleaker.

Meanwhile, conservatives are assaulting universities as liberal hotbeds of treason and no fucking wonder - with conservatism becoming the brand of ignorance and vindictiveness, the people who lean conservative are staying away from college (let's mention in passing that they're also the least likely to be able to afford it).

This wasn't a round table featuring Charles Murray. This wasn't a debate between Charles Murray and David Graeber. This was sit down, shut up, and pay to listen to Charles Murray tell you your failure is your own goddamn fault. Considering the infantilization foisted upon undergrads everywhere, the utter powerlessness of the average undergrad, the only thing that's going to happen is anger and aggression. 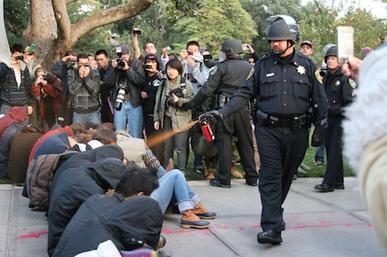 THAT is the power dynamic your average undergrad is facing. Wanna make a political statement? Pepperspray to the face. And we wonder why they're all up in arms about "safe spaces" and a bunch of academics that literally cannot be fired spin up about their freeze peaches when they can't invite whoever the fuck they want with those kids' tuition money.

Two quotes, the first from the New York Times op-ed:

What alarmed me most, however, was what I saw in the eyes of the crowd. Those who wanted the event to take place made eye contact with me. Those intent on disrupting it steadfastly refused to do so. They couldn’t look at me directly, because if they had, they would have seen another human being.

I stood at the podium. I didn’t make any attempt to speak—no point in it—but I did make eye contact with students. I remember one in particular, from whom I couldn’t look away for a long time. She reminded me of my daughter Anna (Middlebury ’07) — partly physically, but also in her sweet earnestness. She looked at me reproachfully and a little defiantly, her mouth moving in whatever the current chant was. I’m probably projecting, but I imagined her to be a student who wasn’t particularly political but had learned that this guy Murray was truly evil. So she found herself in the unfamiliar position of activist, not really enjoying it, but doing her civic duty.

If Prof. Stanger actually wanted kids to engage with the thoughts of Charles Murray, she should have given them a champion to ask the questions they won't be allowed to ask, to raise the points they won't be given a chance to raise, to gain some empowerment in the deeply disempowering environment of the lecture hall. So either she didn't, or she sucks as an educator. Seeing as how she spent the afternoon confronting an angry mob and ended up with a concussion, I suspect she sucks at lots of things. I mean, look at the arrogance:

MIDDLEBURY, Vt. — There’s nothing like a little violence to focus the mind. I am the Middlebury College professor who ended up with whiplash and a concussion for having the audacity to engage with the ideas of Charles Murray, a scholar at the American Enterprise Institute.

Engage with him all you want. It's when you decide you need an auditorium and ticket sales that you cross a line.

You mentioned Graeber. Would he have been your champion of choice against Murray?

He was my flippant angry leftist anthropologist.

The average starting salary for college grads is $50k a year, of which only 58% will have within six months.

Do you have a source for this? I'm not doubting the claim, but I'm interested in reading more on it.

I just googled it and grabbed credible data.

Not mentioned in this post: The fact that giving a eugenicist the podium and forcing the audience to wait to be called on, the power structure is tilted irrevocably towards eugenics. Murray wasn't invited to a debate, he was invited to a lecture and all the handwringing on the left about how uncouth we all are misses that point entirely.