Thanks for playing, and keep at it. Even if you miss some days here or there, nobody is counting.

Seems I'm mostly posting these around 3 PM EST workdays, so let's see if I keep that up. I wouldn't be surprised if it is not the same on weekends, but maybe I can keep it constant for M-Fs.

a coworker of 14 years was walked out the door

because some one in Costa Rica can do his job.

because they've not been paying attention to resourcing

I'm getting paid my normal wage

My shame reminds me that it wasn't

work this week is surreal

I worked at three houses today, the first was fairly simple maintenance and didn't take a whole lot out of me however realizing I forgot my good tools for the second day in a row wasn't how I wanted to start things off. By the time we got to the second house it was hot, and I spent most of that time spreading bags of mushroom compost. Sometimes that's really simple except today it just so happened I had to crawl between a wall and a shrub in order to actually get the compost everywhere. At the third house I'm fairly certain ants crawled into my shorts as I cleared away dirt from what used to be a massive ant hill so we could lay grass seed. Odd time of year for it and the stuff was old but we figure it's sitting there so we might as well give it a try. So by the end of work I smell, have squished ants in my shorts, my shoulders are killing me but I would still pick this job over any others I've had.

I'll take refuge in vague wording and write about someone else's job.

It must be a very interesting, if tough, year for political analysts in the US. You know it's bad when people who don't care about politics start to peer in, asking "What the hell is going on here?".

I never cared for politics, particularly of the US, and still, all I heard of Obama's policies was bad. He made cool media appearances nevertheless, and he didn't seem like a two-face, so it made me believe that he's quite a good person, whether or not he's a good President. This year, though...

I used to think that we have a local analogue of a certain Mr. Trump in Russia: Vladimir Zhirinovsky, a Liberal Democrat and the leader of the party. He, too, is often shown spewing some ridiculous nonsense off the parliament stage (or wherever it is he speaks), like taking back the native Russian words for common items (the Russian for "shitter" instead of the French "toilet" etc.). He, too, runs for President every year (barring a few) - unsuccessfully, of course, much like all of the Putin's opponents.

What Zhirinovsky doesn't do is talk shit about race and "the Motherland's greatness" or act like a five-year-old, which all narcissists do when craving for attention. I used to think Trump was like Zhirinovsky until I listed to the bullshit he says...

Which brings us back to the analysts. You sit in the office, you watch those news and you hear something like "Mexico's exporting rapists and murderers" - I imagine that would startle you even if you're experienced in the field. People talk a lot of nasty stuff in politics in the US, but this? This must be something so new, so off, that it would invoke a reaction you didn't know you had left from the years of empathy being dulled from the bullshit on all coasts.

And you call your buddies, and you ask them: "Did you hear?" - as if in disbelief, even though you know that just happened. And they tell you: "Yeah, I did" - and you both go in exasperation: "Jesus".

Even if you miss some days here or there, nobody is counting.

Russians have two words, or sensibilities, for the verb "to want." I want -- where I is the subject, is written Я хочу... (pronounced YA HAchoo). I want this thing, whatever it is, and it is the object of my wanting.

Мне хочется (pronounced menYE HOchetsa), although a verb with a similar root, has a different subject and object. Now me is the object, and the subject is this thing, whatever it is. The difference is the assignment of responsibility. The latter verb could almost be translated as This thing causes great likeness in me. It's subtly different. But whereas I was the agent in the former scenario, in the latter, this thing was so irresistible that I'm not even to blame. Which is truer?

Today, instead of loving my job, I imagined a job I loved, and thought about sentence structure.

Switch хочетса to хочется, and you've got it. Although I would have never thought about the distinction myself, it just comes out naturally.

Мне хочется = I'd like or It would be nice to.

True. Learning the language again as an adult after having forgotten it as a child was an interesting experience. It was much more academic than conversational. And so I have a scholarly, almost legalistic, understanding of words and the shades of difference in meaning between them. I was struck by the switch in agency between Ya hochy and Mne hochetsa.

Show up, get right to work. I'm behind on a lot of things because we've been interviewing candidates all week for a tech position in my department. This department, by the way, is expanding a bit now that I'm here. A great and diverse group of people, which is probably why I was attracted to it in the first place. We have a nacho cheese machine. It's quiet, dormant, waiting to be satiated with a "cheese" product in order to satiate us. For today, meetings, meetings, some actual work, and playing with systems. The last part is what I'm learning is my passion here and in manufacturing. How do the systems work, how do they work with other systems and with the people they directly impact. What does the back-end look like. The knowledge base is seemingly endless.

Got the news that my new title is being finalized as we speak and I should have the offer and paperwork and all of that soon.

In which I ponder the value of productivity. 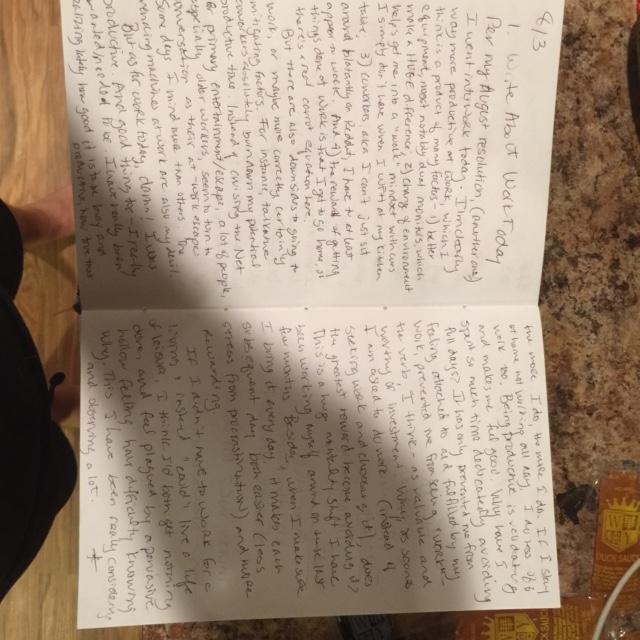 I thought about my day at work, but there isn't much there. It's simple enough and I'm regulated enough by the feds not too get too in-depth with it. Currently, I'm looking for a new job, and that is far more harrowing experience in my eyes. I've honestly been slacking, but there are a lot of nerves there to be struck. Day after day I ask myself the same question, "What do I do?" I don't think I have an answer that would sufficiently quell the voices in my head. I'm not sure if I'm upset that I didn't take full advantage of my time in college, but regardless that is the past now. Time to move forward. I've searched through quite a few job listings, and I think I'm closer than I was a month ago. At this point when I have my resume completely updated I'm just going to cast the widest net. I was thinking about it while scrolling through a lot of the listing that I have no clue who I want to be, and that I'll never figure it out by never failing to love a job. I'm trying to light the fire.