The Cossacks of the Zaporozhian Cossacks (from 'beyond the rapids'), inhabiting the lands around the lower Dnieper River in Ukraine, had defeated Ottoman Empire forces in battle. However, Mehmed demanded that the Cossacks submit to Turkish rule. The Cossacks, led by Ivan Sirko, replied in an uncharacteristic manner: they wrote a letter, replete with insults and profanities. The painting exhibits the Cossacks' pleasure at striving to come up with ever more base vulgarities. During the painter Ilya Repin's time, the Cossacks enjoyed great popular sympathy. Repin also admired them: "All that Gogol wrote about them is true! A holy people! No one in the world held so deeply freedom, equality, and fraternity."

As the Sultan; son of Muhammad; brother of the sun and moon; grandson and viceroy of God; ruler of the kingdoms of Macedonia, Babylon, Jerusalem, Upper and Lower Egypt; emperor of emperors; sovereign of sovereigns; extraordinary knight, never defeated; steadfast guardian of the tomb of Jesus Christ; trustee chosen by God Himself; the hope and comfort of Muslims; confounder and great defender of Christians - I command you, the Zaporogian Cossacks, to submit to me voluntarily and without any resistance, and to desist from troubling me with your attacks.

Zaporozhian Cossacks to the Turkish Sultan!

O sultan, Turkish devil and damned devil's kith and kin, secretary to Lucifer himself. What the devil kind of knight are you, that can't slay a hedgehog with your naked arse? The devil excretes, and your army eats. You will not, you son of a bitch, make subjects of Christian sons; we've no fear of your army, by land and by sea we will battle with thee, fuck your mother.

You Babylonian scullion, Macedonian wheelwright, brewer of Jerusalem, goat-fucker of Alexandria, swineherd of Greater and Lesser Egypt, pig of Armenia, Podolian thief, catamite of Tartary, hangman of Kamyanets, and fool of all the world and underworld, an idiot before God, grandson of the Serpent, and the crick in our dick. Pig's snout, mare's arse, slaughterhouse cur, unchristened brow, screw your own mother!

So the Zaporozhians declare, you lowlife. You won't even be herding pigs for the Christians. Now we'll conclude, for we don't know the date and don't own a calendar; the moon's in the sky, the year with the Lord, the day's the same over here as it is over there; for this kiss our arse! 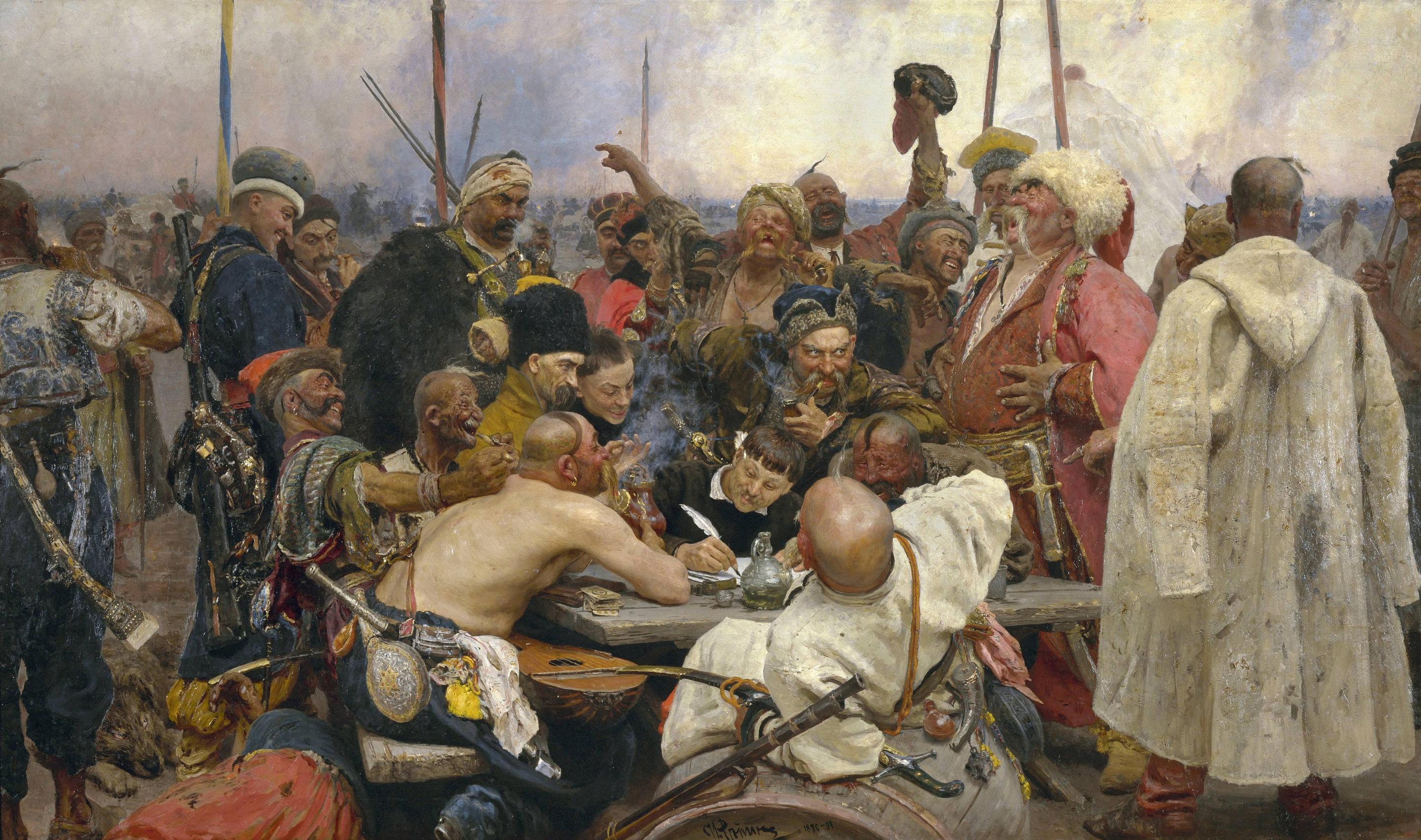 Here's also a live recreation of the photo that I found: 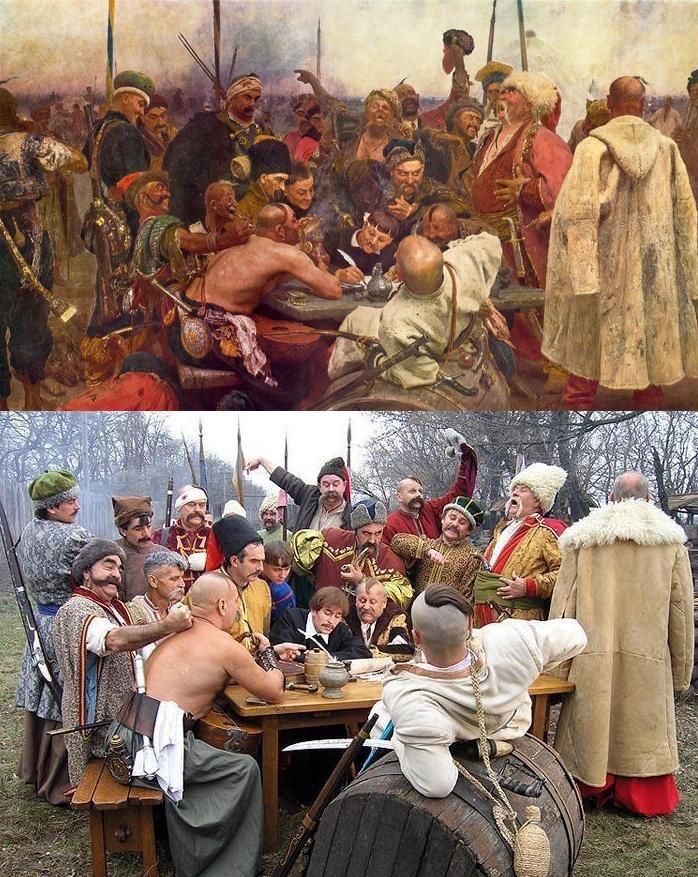 I may need to get these framed.

Which personality is your favorite?

If I have to choose just one, I pick big belly laugh on the right.

All those 12 year olds on XBox and voice chat saying that they "Fucked yer mun?" They are merely channeling the Cossacks from the 17th century.

Dude you and I both know that if you got called a "catamite of Tartary" or "goatfucker of Alexandria" instead of dick this dick that dick the other you and I would both play XBL more often.

I bet you could persuade some SCA types to go for it.

Nothing new under the sun.

I struggle to translate it, but there you have it:

TO THE HIGH COMMAND OF THE GERMAN ARMY

To the Fritzes, the Hanses, their servants and the rest of the scum

of the aryan chickenthievery gang

I can read the alphabet, and have a little vocabulary. It seems like the body of that poster is a lot of rhyming insults.

Is this a direct homage to Repin's Cossacks?

It seems like the body of that poster is a lot of rhyming insults.

It's what it is. Nasty rhymes of the kind of language one wouldn't be taught to translate.

I don't believe it is a homage. Perhaps it might have served an inspiration to the Soviet soldiers who wrote it, though. I found it appropriate to the topic of the conversation, having the picture in my archives of interesting historical things, so I posted it.

Definitely relevant. The poster, the reply to Mehmed IV by the Cossacks, and the painting itself all appeal to a headstrong, haughty, testosterone-laden side of me. Probably the side of me that older, wiser men have always warned younger men to be careful in heeding. The side of young men who tremble when they read Shakespeare's St. Crispin's Day Speech:

Can you put the speech in a simpler language? I'm afraid my grasp on English fails me when it comes to Shakespeare.

Sure, I can try. The speech occurs shortly before the Battle of Agincourt on St. Crispin's Day, October 25, 1415. In Shakespeare's play Henry V, the title character makes a brief speech to his English army, in response to one of his lord and lieutenant's wishing they had more soldiers to fight against the numerically superior French. The speech is longer, but from where I first started the speech:

The story of this battle shall be passed down from father to son, as an example of bravery.

And not another October 25th will go by without everyone remembering us and what we did here.

The most famous line from this speech. A call to brotherly bonds. Even though we come from different mothers, our presence here brings us as close together as though we were family.

It doesn't matter who you are or where you come from, you are my brother. Even if your past actions were immoral or cowardly, your presence here today cleans your character.

Even noble-born lords back home will think they they are cursed because they are not here with us, on this most special of days.

And those back home will shrink if the conversation ever turns to this battle, they will think themselves less than fully man, because they were home instead of here.