Ten years ago, I entered a wager on the price of oil. My position, inspired by the writings of Julian Simon, was that oil, like many other natural resources, would drop in price in the long run. A period of ten years was deemed long enough to weather temporary fluctuations in price, and was the term used in Simon's famous bet with Paul Ehrlich.

Because my friend had reservations about the U.S. dollar as a stable marker of value, we went with the price of a Big Mac, as tracked by The Economist. At that time, 19.2 Big Macs had the same price as a barrel of oil.

Oil spiked in the first years, and the record shows that I did not comment often on the wager in those gloomy days. But within three years, prices had equalized. Oil continued to drop, and then recovered some, so by the halfway point it was a close race. 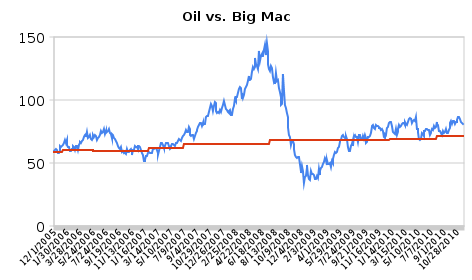 Occasional bumps in the Big Mac index, keeping the burger ahead of inflation, kept things exciting as the years advanced.

After eight years, I was trailing, with the Big Mac basket valued at $87.55 compared to oil in the mid-90s.

Then, just in time, oil crashed. With less than a year to go, oil prices fell by about half. I was saved.

I have not yet collected, but I am thinking of offering double-or-nothing, despite the apparently low present prices of oil. My wager was never about oil per se, but about the increasing availability of natural resources in the long run, a trend that has held true for many resources. I see little evidence to support the idea that this trend is likely to reverse. Who wants in?

In the next ten years, I think the far more interesting question with oil will be demand and not supply. These past several years have shown that supply isn't remotely becoming an issue in the near or medium term. What will happen to demand, however, if wind and solar keep falling in price? One would think that oil will fall as alternative energies also fall, as many types of fuel are at least somewhat fungible. I've taken to not believing any predictions about oil prices however, because the only thing they all seem to have in common is their incorrectness. Turns out no one can predict the future. Who knew?

What will happen to demand, however, if wind and solar keep falling in price?

I think batteries are the more important piece here. If battery prices drop an order of magnitude, oil use for transportation will see a long, slow death as more and more vehicles move to electric. Very little oil is used in electric generation. One of oil's key benefits is its energy density. While batteries aren't close to matching that density, if they're cheap enough, it won't matter.

The thing about entering a double-or-nothing for oil is that oil's fate in the 21st century is far from clear. As for resources in general, we've talked that to death, but I'm not sure exactly where we left off. Perhaps I can find some of our old conversations on the subject and see if it's worth a rehash.

EDIT: let the record show I was counting the days on the oil wager last month.