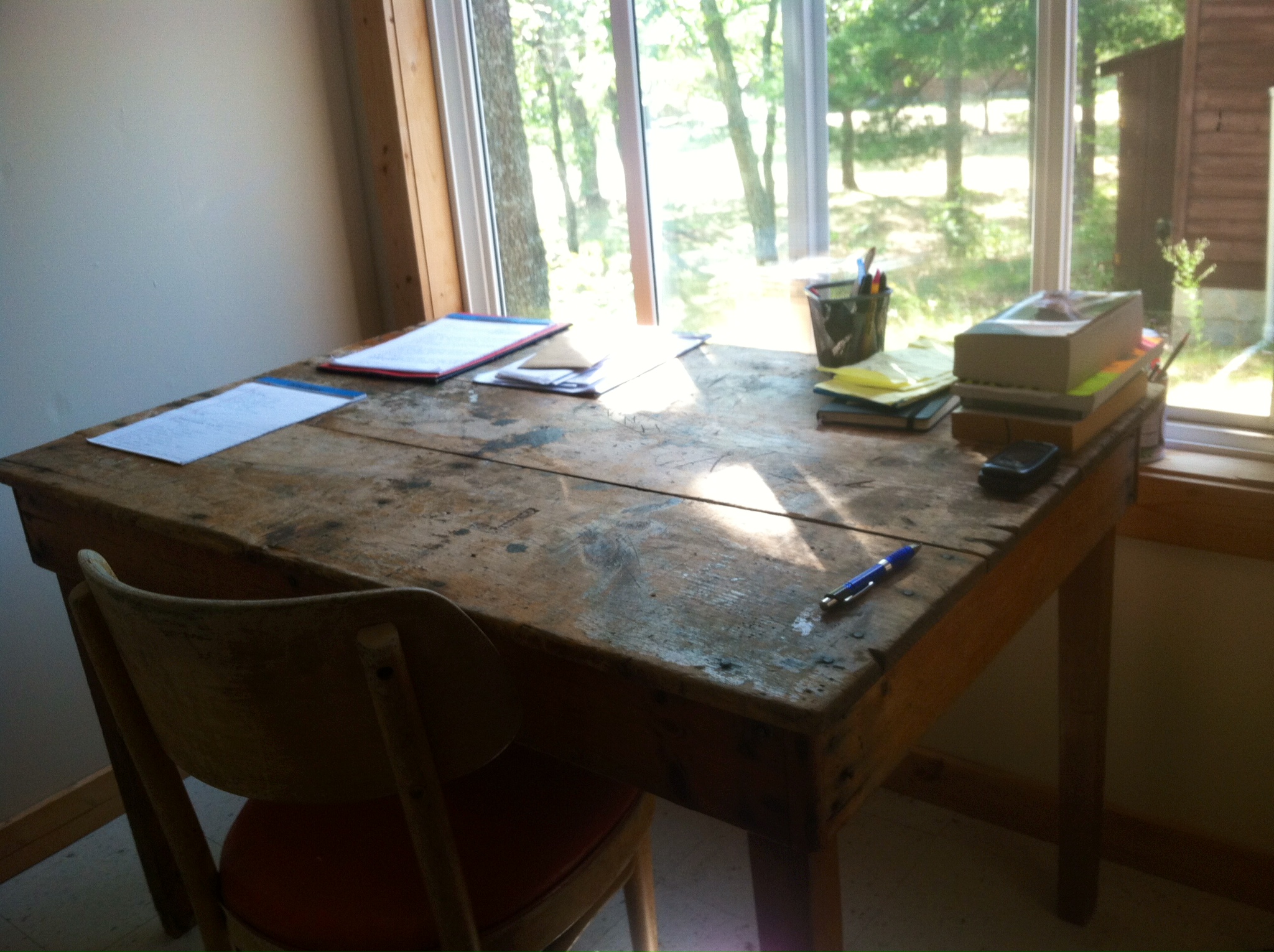 What do you like about your space? What makes it yours?

I live in a cabin in the woods of northeastern Michigan, working at a summer camp. This is the table I write on in the mornings and evenings. I love the wooden table, the feel and look of it. Even though my view is partially blocked, I like it, it's a stillness that I can rely on when thinking. The place is my own because of how tiny the room is, it's a scant 6 by 6 feet. The window is everything.

I'm working from home today, but here's a shot from a post like this a few years ago. 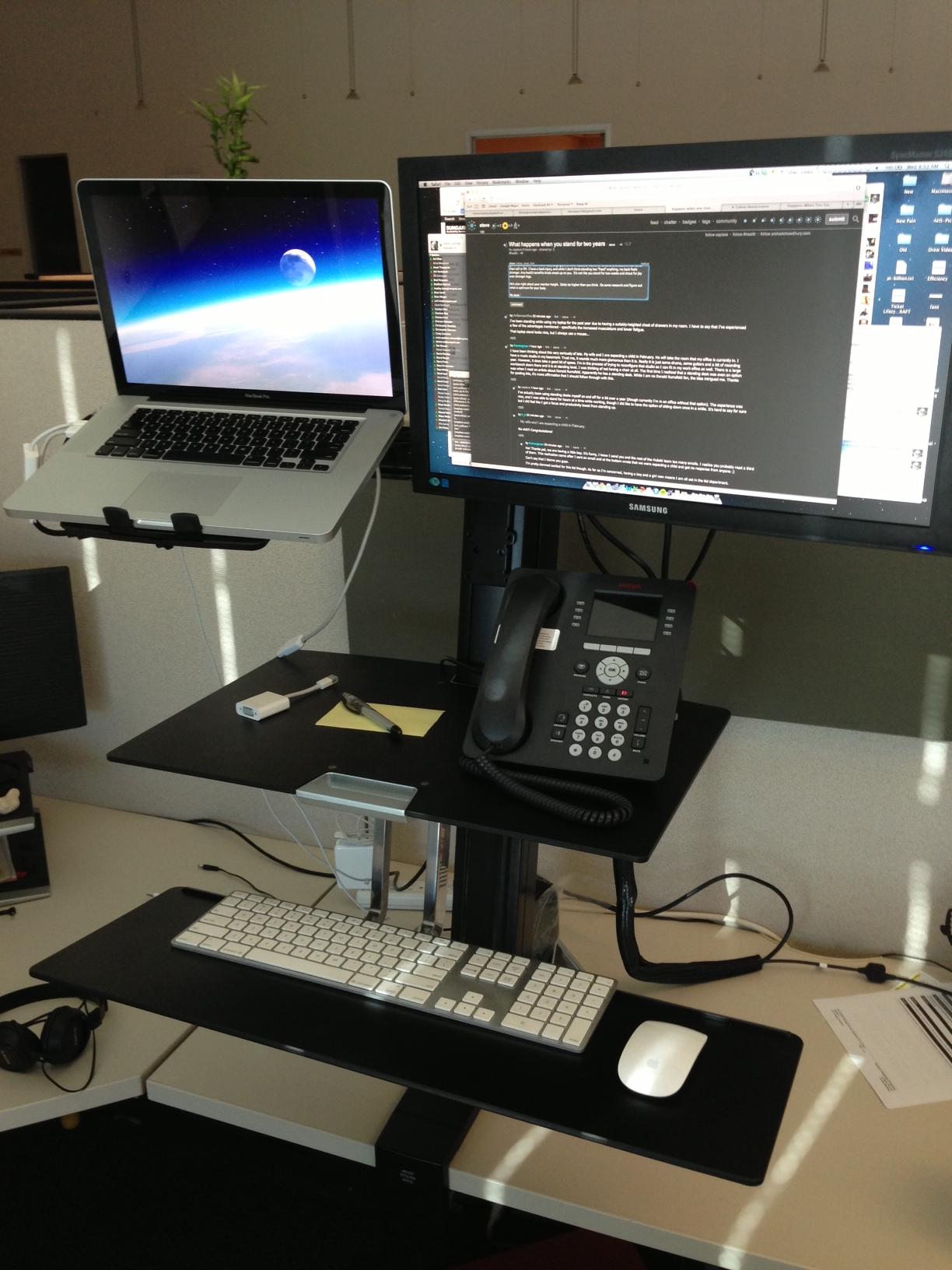 Dzam. The levels. And this is a standing desk, I presume?

Yep. It was an after market, bolt-on standing sitting thing. I've upgraded to a full blown standing desk and dual monitors. Pictures to follow.

I'm jealous. One day I'm going to have a workstation like this. 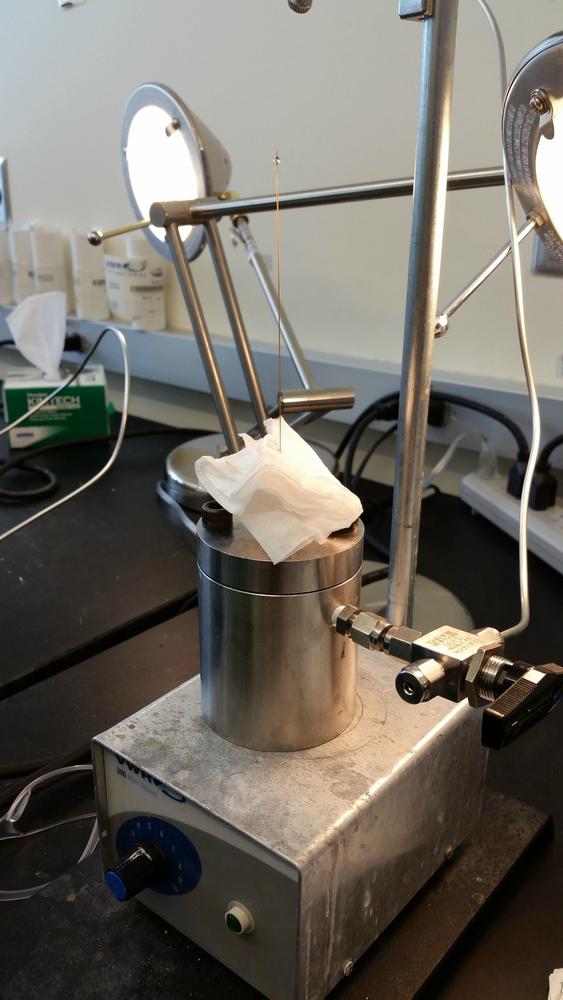 Wow. So what exactly is the spectrometer reading? What's the overall purpose of this exercise?

LC-MS: The mass spectrometer measures the mass-to-charge ratios of its inputs, picks the highly abundant ions, isolates and smashes those ions, and collects another mass-to-charge measurement of the fragments of those ions. It lets you "sequence" protein fragments and tell relative abundances, though the process is nothing like sequencing DNA.

That's amazing sounding technology. It's incredible to me that proteomics as a term was only coined in 1997 and now it's a huge scientific field of endeavor. I guess that's true of a few things.

So, what's the importance of sequencing protein fragments? By fragments, do you mean... amino acids? What's the big picture of this kid of work?

That's amazing sounding technology. It's incredible to me that proteomics as a term was only coined in 1997 and now it's a huge scientific field of endeavor. I guess that's true of a few things.

Haha, yeah, the crazy one to me now is in situ proteomics. That's one of those techs that could be The Next Big Thing in medical research in the next decade or two, if they're able to overcome a few big challenges.

So, what's the importance of sequencing protein fragments? By fragments, do you mean... amino acids? What's the big picture of this kid of work?

Yeah, fragments == short amino acid chains == peptides, the things that you get when you add a protein-cutting-enzyme, like trypsin, that cuts up proteins at predictable locations. The data gives you information on how abundant different proteins are, and which modifications they have. Putting that in context, it can tell you that some mutation leads to the activation of X, Y, and Z pathways (i.e. this cancer mutation leads to activation of Ras and Akt pathways) because you see an increase in the abundance of protein modifications associated with that pathway.

The power of this approach is that it allows you to simultaneously survey many sections of a large system. Thus you can get a more complete picture of which parts of the system are more important and which parts can probably be ignored. In practice, things aren't as straightforward as they are in theory, but this method gives a good starting point for more focused studies of a system.

The relevance of this work, I think, is that many diseases are not caused by intrinsically toxic species, like an acid bath that dissolves anything it touches, by physical damage that, say, cuts a cell in half, or even by broke cogs that bring the whole machine to a halt. Rather they arise from how an organism chooses to respond to its environment. And it's in that choice, propagating by these underlying biochemical signaling networks, that one can begin to understand how a disease has the effect that it does.

Rather they arise from how an organism chooses to respond to its environment. And it's in that choice, propagating by these underlying biochemical signaling networks, that one can begin to understand how a disease has the effect that it does.

Really? So a lot of diseases aren't actually species of invading bacteria or viruses but the body gone awry? Typing that out now it seems logical, like I know cancer is such a normal-behavior-gone-awry.

So a lot of diseases aren't actually species of invading bacteria or viruses but the body gone awry?

The ones that aren't caused by external factors of course. And yeah, cancer is one disease where cells change their programming. Auto-immunity and many neurodegenerative disorders would be others where (I think) intracellular signaling goes awry.

I would, but doing so would most definitely get me fired, if not sued. I work in a space where there is a LOT of confidential data (I signed an NDA) and so all complex electronics (defined by having a processor - so MP3 players, phones and tablets are banned if not company-issued or the person is approved, but watches are okay) are banned. 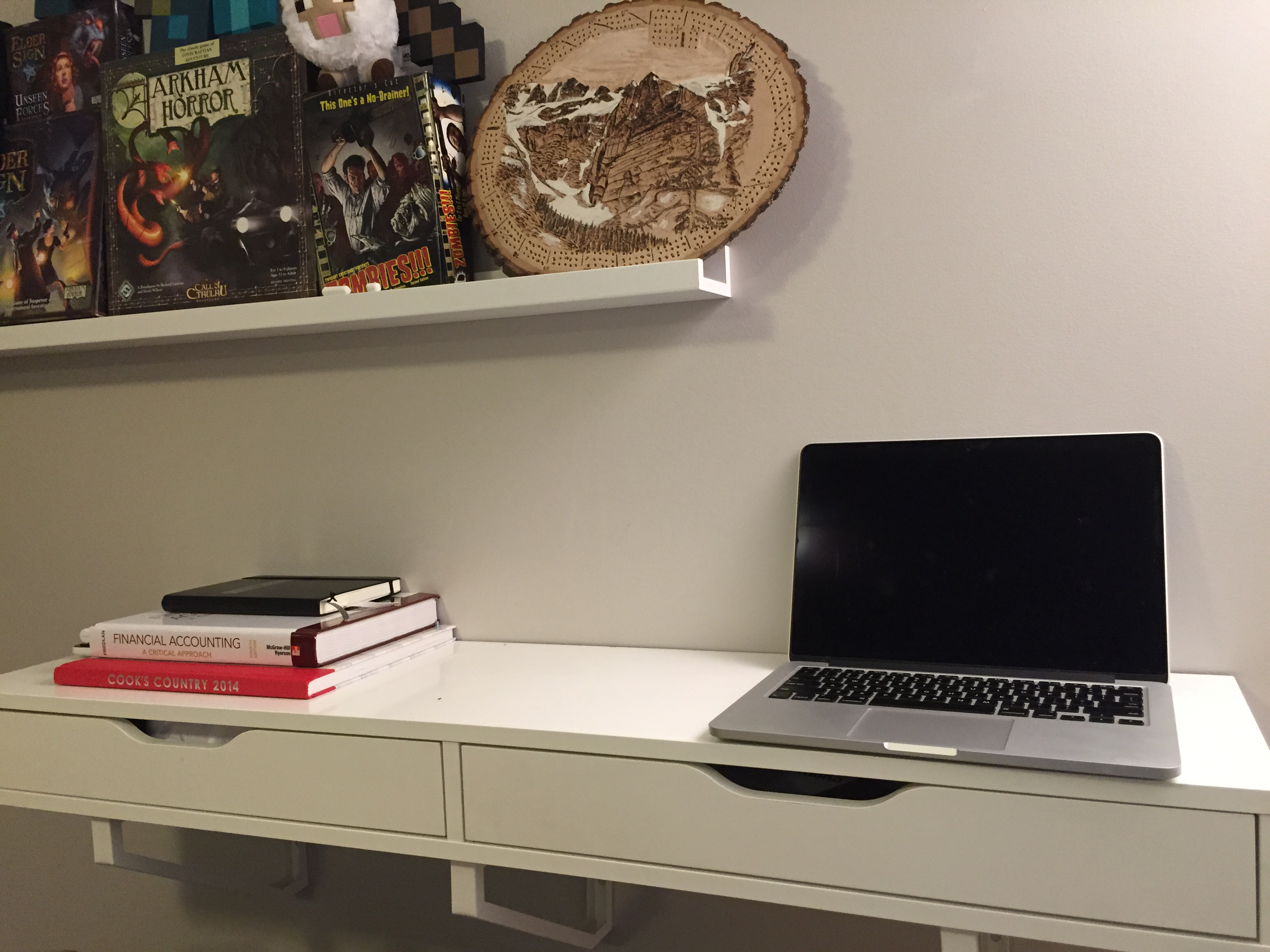 We found a wall mounted desk in the clearance section of ikea and it's worked pretty well for me thus far. I can stand, which is nice as before when I worked at home I was just on the couch which wasn't great for my posture or health. Also, there's something distracting about having the same place be where you play (video games, movies, tv, etc) and work. Why work when the ps4 controller is just a arms length away?

Just moved into a new office last week. I chose to try a standing desk after hearing nothing but good things about them for years. So far it's great! 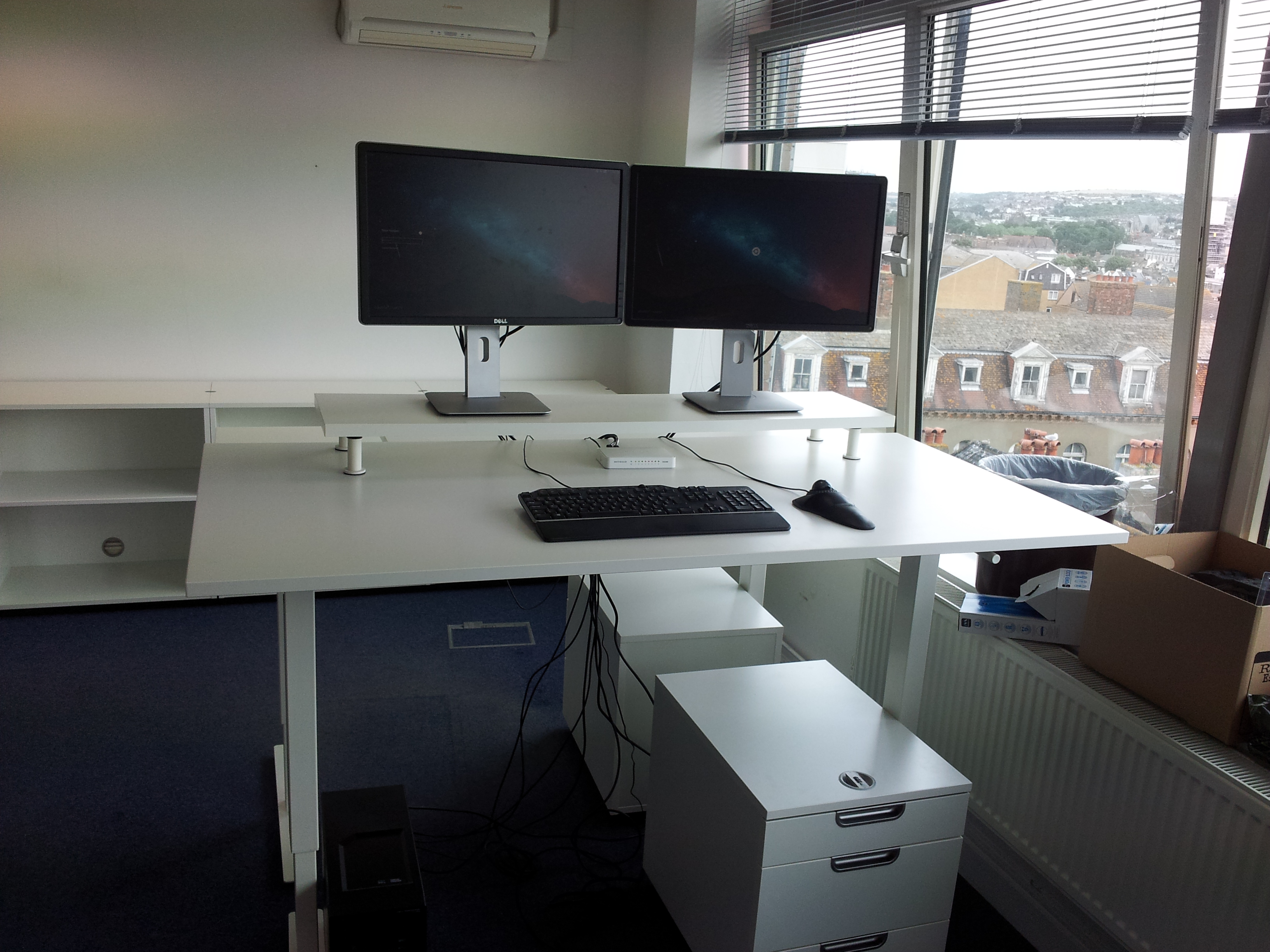 I wish I could work from a cabin in the woods. It's kinda my long-term goal to get a remote job that would allow it. 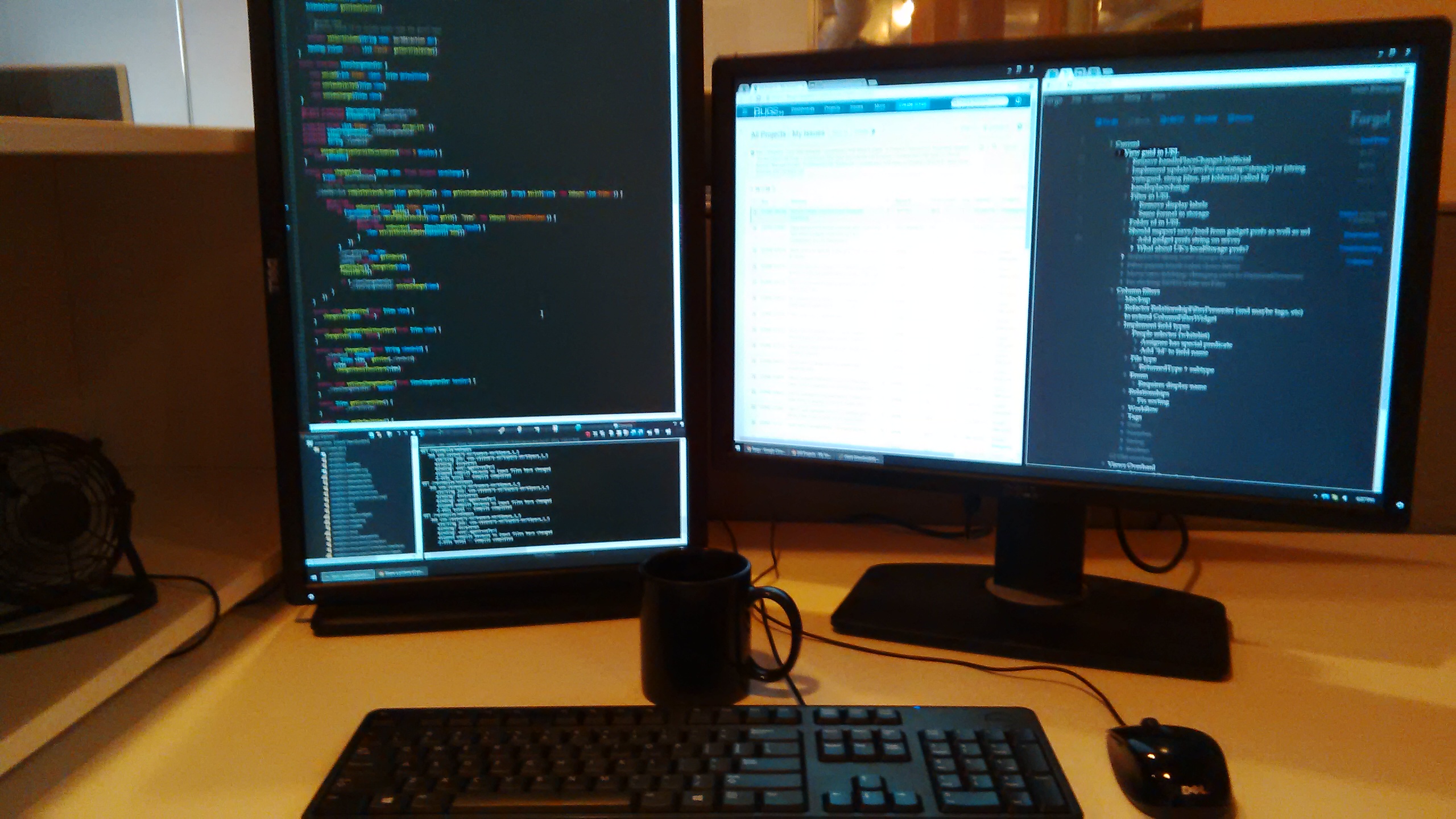 Whoa ~ that /is/ a beautiful desk and view

Here is my corporate Japanese office in Sydney Australia 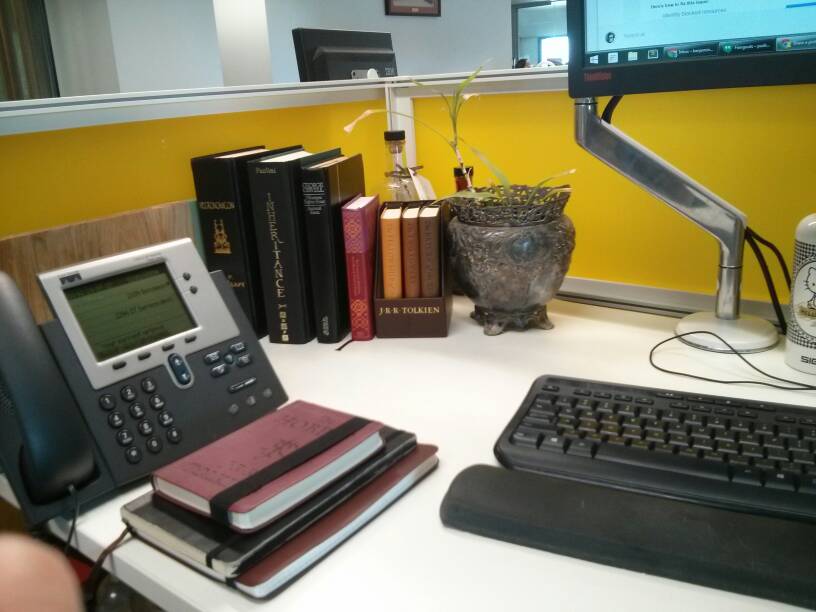 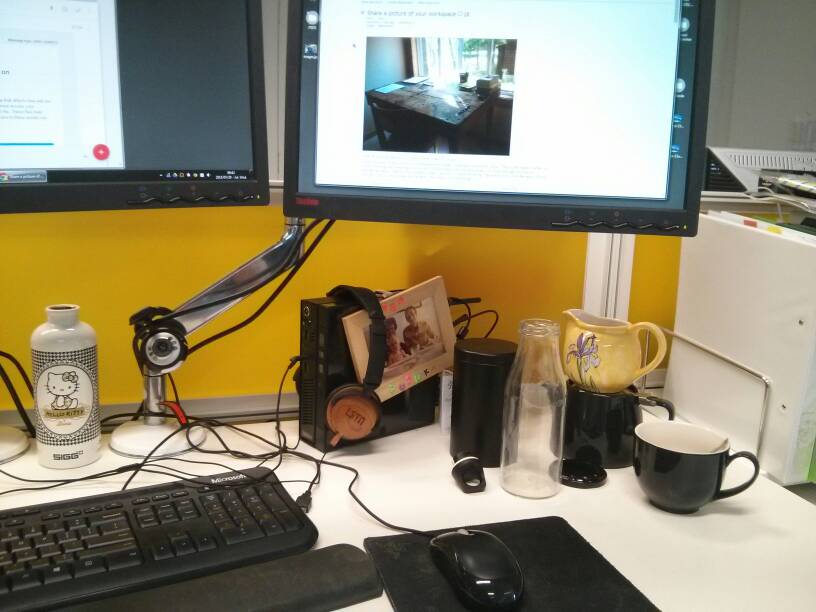 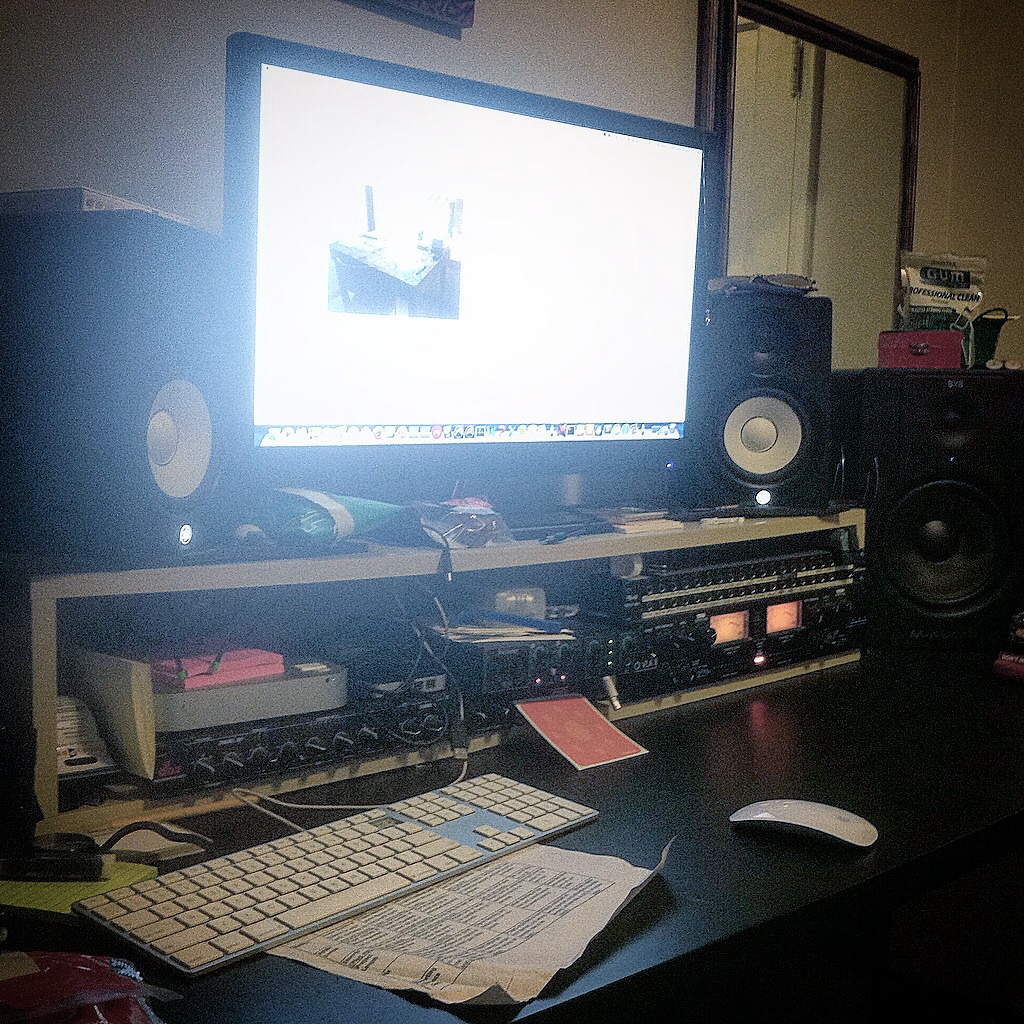 I like this a lot. What kind of speakers are those?

Bit old but not much has changed.

I haven't done much to make it like home (still need a plant) but I like that I can bring my own keyboard, and I have multiple monitors to arrange.

I wish I had an unpretentious wooden table to write at. Seems it would help the flow.