I've been working on a really interesting topic right now and since there seems to be some interest in this subject around hubski and because I like talking about what I'm doing and getting people interested in cool stuff, I'm going to talk about Artificial Neural Networks. Shoutout to insomniasexx!!

Anyway, lets get down to business.

An artificial neural network is, as one would assume, an artificial replication of a neural network! Cool huh? But since that kind of argument doesn't really lead to new knowledge, let's break things down from the start:

- A neural network is a network of neurons.

- Neurons are the most important part of our nervous systems, in which they are what transfer information and, when linked in networks, allow for complex thoughts. This is a neuron: 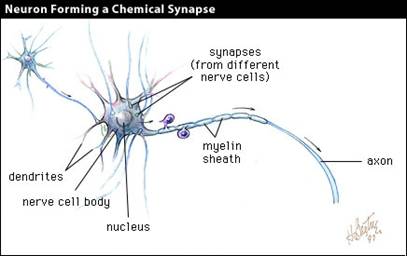 - Neurons, in the brain (and in other places), work by reacting against a change in voltage which is transmitted to them by other neurons (this is a synapse). They are what we call electrically excitable.

- Each neuron in the brain has two kinds of connections to other neurons: input and output. Generally, a neuron will have several (thousands, in a human brain) of each.

- How signals are transmitted in the brain, through a bunch of neurons, is the following: disregarding the signal origin (which isn't very important to us in ANNs (that's short for artificial neuron networks, remember that) because we feed those to our ANN), when a neuron gets a signal from another neuron connected to it's "input part" it may or may not send that signal forward. If that signal isn't sent forward it, obviously, ends there, and if it is then it will be up the the next neuron (to which the first is outputting) what happens to it.

I hope I was clear with my wording there, but if you didn't get everything don't sweat it. That was just a basic introduction to the mechanical workings of a neuron which you will certainly understand better when I give some concrete examples.

Alright, that was very pretty but how does an ANN actually work?

The model we use, specifically, for a neuron, in ANNs is the following: 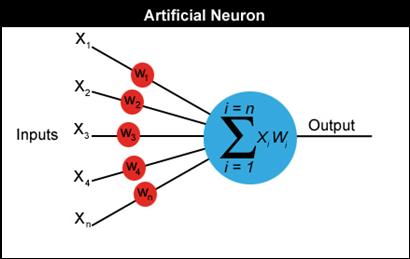 That image's pretty good, but words also do a really good job in the explanation department. In that picture you can see an artificial neuron connected to n inputs and 1 output. What it's going to do is read all of the inputs (all of which are binary, 0 or 1), multiply each by it's respective weight (to be explained further) and output a signal if the sum of those is higher than it's threshold. Pretty basic, right? The deal with the weights is this: to be able to fine tune the results of a neuron in face to a specific input and to further advance it's mimicry of a real neuron, instead of just adding up the inputs and seeing if they're over the threshold, we assign a weight to each inputting neuron. That makes it much easier to create and adjust, on the fly, the output that a certain set of input will yield, and allows us to have much more complex behaviour with much simpler neural nets than if we took the inputs directly. Since we allow this value (usually) to be within -1 and 1, we can also have negative inputs, or inhibitory connections. This is also great because it allows us to have more complex calculations with fewer neurons. Only one more thing about our model!: Each neuron has it's own threshold value, usually. We treat is as one of the weights, whose input is always -1. That makes it so instead of writing

which can make programming a model of a neural network and changing it's values on the fly easier. (Don't sweat the equations, I don't know how to format them here and they're probably unreadable. I just wanted to provide a concrete example of how a neuron calculates whether it passes a signal forward or not).

I'd like to hear about applications if that's one of the things you're planning to talk about.

Definitely, and this is one of the most important things I want to discuss after I finish writing a reasonably comprehensive rundown of the rest of the inner working of artificial neuron networks. There are soooooo many possible applications for neural networks due to their intrinsic ability to adapt to problem, as long as you give it a reasonable input and output.

what a neuron itself does is calculate whether to pass a signal forward or not. How it does this is, in a very oversimplified way, add up the inputs from the neurons that input into it and, if the sum of those inputs are over a certain threshold, pass the signal on.

As Hofstadter put it (in Gödel, Escher, Bach: An Eternal Golden Braid):

In any case, it is simple addition which rules the lowest level of the mind. To paraphrase Descartes' famous remark, "I think, therefore I sum" (from the Latin Cogito, ergo am).

Does part 2 include multilayer networks and hidden layers?

Definitely does! I'll also talk a bit about learning algorithms for these, though if part 2 gets too long I'll make it a part 3.

I'm definitely the most interested in the learning algorithms, and would honestly love a post dedicated to them entirely.

Awesome, I'm glad you understood. I was partly afraid that I wasn't being as clear as I wanted to but it's cool that people are understanding what I meant to transmit. I'll definitely touch on google's creepy images!

Duuuude. Just yesterday I was reading up on biological neuron models, and artificial ones as well, but couldn't find anything that made sense. Then here you are, talking in depth about it. Synchronicity, I like.

Hehe, that's pretty cool. It's a really interest topic and it's getting a lot of attention right now (thanks for making creepy pictures of dogs google!) and I felt like it would be cool to explain it.

I've rendered your equations here. I wasn't quite sure whether to align the equations to the comparison symbol, or the threshold variable, but I used the former.

I also wonder if the site would benefit from mathjax integration.

I really loved our conversation in IRC, glad I could see all this laid out.

Yeah, I was pretty psyched about it that night. Awesome, I'll probably keep writing part 2 tonight!

On another note, I'll probably be on the IRC for the next couple of days/nights so maybe I'll catch you there!

Lol you know I never sleep bud, you're always welcome to come in and liven up discussion with this stuff :D

How similar are ANN to the actual NN in the brain?

Very interesting, I look forward to part 2. I recently started toying around with recurrent neural networks to generate text based on a pre-existing corpus, it's good to learn a little more about the theory behind machine learning.

That's really cool! Can I ask what you're using as / whether you're using a framework for your neural networks? When I started my current project I started playing around with a few different frameworks so I could simplify most of my work, but I ended up starting to write my code from scratch (efficiency was a major concern).

Machine learning is a really interesting topic (with soooo much stuff to talk about) and I'll definitely talk about it.

Anyway, it seems like you've got a very cool idea and I want to know more about it!

Thanks, I've used Torch as a framework. I probably wouldn't be able to produce anything more efficient myself. I'm currently still very much at the layperson stage and taking lots of learning materials and code from examples online but I've been really pleased with the results so far.