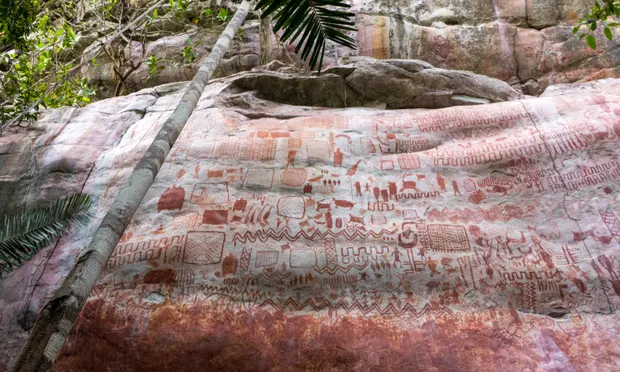 The discovery was made by a British-Colombian team, funded by the European Research Council. Its leader is José Iriarte, professor of archaeology at Exeter University and a leading expert on the Amazon and pre-Columbian history.

He said: “When you’re there, your emotions flow … We’re talking about several tens of thousands of paintings. It’s going to take generations to record them … Every turn you do, it’s a new wall of paintings.

“We started seeing animals that are now extinct. The pictures are so natural and so well made that we have few doubts that you’re looking at a horse, for example. The ice-age horse had a wild, heavy face. It’s so detailed, we can even see the horse hair. It’s fascinating.”

The images include fish, turtles, lizards and birds, as well as people dancing and holding hands, among other scenes. One figure wears a mask resembling a bird with a beak.