This was my first ultramarathon, I was signed up for one in late-July but that was unfortunately cancelled due to wildfires in southern Oregon. So, I signed up for this after learning about it from a friend, and tried training. But then I hurt my ankle. And then I hurt my ankle a second time. And then I didn't actually commit to running this race until the Wednesday of the week of the race...the race was on Saturday.

No real training plan for this due to the injuries. I did not run the first 16 days of October, then ran my way into a 60 mile week, including about 25 miles on trail which had me feeling good about actually being able to finish the race. Which, I'm of the opinion that a good goal for your first 50k or ultra of any distance is simply to finish without being injured. So, that was my primary goal. Of course I put in a secondary goal of a 6:30 finish.

Took a half day off of work and drove down to Portland to meet up with some friends before driving the rest of the way to the state park. Of course we were a little behind schedule, and barely fit everything into the car...so much to pack when you're camping and running all weekend. But, we made it, wandered over to another group of friends tent and ate a little bit of dinner, hung out at the fire, and went to sleep. Kind of, I barely slept. But at least made the time to pack the right clothes, food, etc. for the morning.

5:30am wake-up for a 7:30am start. Rolled around a bit, started feeling very, very nervous right around 6:00am...did some pacing around camp to work that out. At 7:00am, realize that oh shit, we're starting this thing mostly in the dark. I had packed my headlamp, but my friend hadn't so she borrowed one from one of the 7 miler runners who wouldn't need hers. Then, we start walking towards the start/finish line to realize we don't actually know the right way to get there from the campsite. Fortunately an SUV drove by, saw that we were clueluess, and picked us up. Really nice people who saved us from missing the start time, and had an awesome Boxer mix in their car who would not stop licking us.

The start was great! I was so happy to not be in a corral, and to be in a smaller group (roughly 180 people started this distance, with the marathoners starting 30 minutes after us). The temperature was brisk, it was a bit foggy out, but there was no rain. You couldn't ask for a better start!

Highlights from the first 15.0 miles:

I generally felt good throughout this entire part of the race, pulling 11:00ish minute miles. It was the flatter section, with a couple of steep ups and downs, probably 1000ft of gain over the course of it on non-technical trail and a little bit of mud.

1. Being thankful for wearing my road shoes instead of my trail runners, since the first 3 miles were a mix of trail and road. The road would have chewed up my Altras way more than I would have liked.

2. Mile 2 actually passed our campsite, so we saw some friends who were up and cheered us on! I didn't need my headlamp at this point, so I threw it at a friend for storage. Apparently I threw it way too hard and right at her face...

3. There was a creek crossing? And by crossing, I mean about 12ft of shin deep water that was very, very cold and did a great job and getting my feet and shoes soaked! I had heard about it, didn't realize it was that far into the course, and stopped for a couple of minutes just...looking at the thing and dealing with what was about to happen. It sucked, but dried off enough after a couple of miles.

Highlights from the next 11.2 miles:

This was where things went...not great...a solid 4 mile mountain stretch with probably 2k ft of elevation gain, in the mud, where when you took a step forward and up the hill you'd slide through the slop back down or sideways and try to keep pushing. The downhill between the two uphill stretches wasn't long enough to be a great break, either...it was this stretch where I was mentally struggling, the fact that there would still be another 11ish miles of running after finishing the mile 15-19 mountain.

2. There was this really great stretch of single track trail that was heavily wooded and had a lot of undergrowth that made it feel like you were moving very fast when you were not (hint: I wasn't).

3. The aid station after the mountain (mile 20) was awesome! Everybody was looking less than great, and this aid station had Coors Light and a bottle of Fireball at it. I had neither.

Highlights from the last 6.0 miles:

I actually mostly felt good on these miles! We finally ended up at the "falls" part of the park, which meant a way different terrain. Instead of soft dirt, there were now a lot of sharp rocks that could be treacherous if you stepped wrong on them.

1. All of the waterfalls were beautiful! With all the rain and wet lately they were really flowing, the first one we came across blew my mind but also that could have been because I getting really tired at this point.

2. There were a lot of hikers, families, etc. at this point which was also good and horrible. Some of them wouldn't move, but the ones that gave me high fives or words of encouragement were great!

3. Hitting the historic village area of the park and knowing there's only a mile left...until hitting a goddamn hill they put in the last mile, another 300-400ft of gain RIGHT AT THE END WHAT THE FUCK which was almost too steep to really run down, but I did, and I crushed it into the finish line. 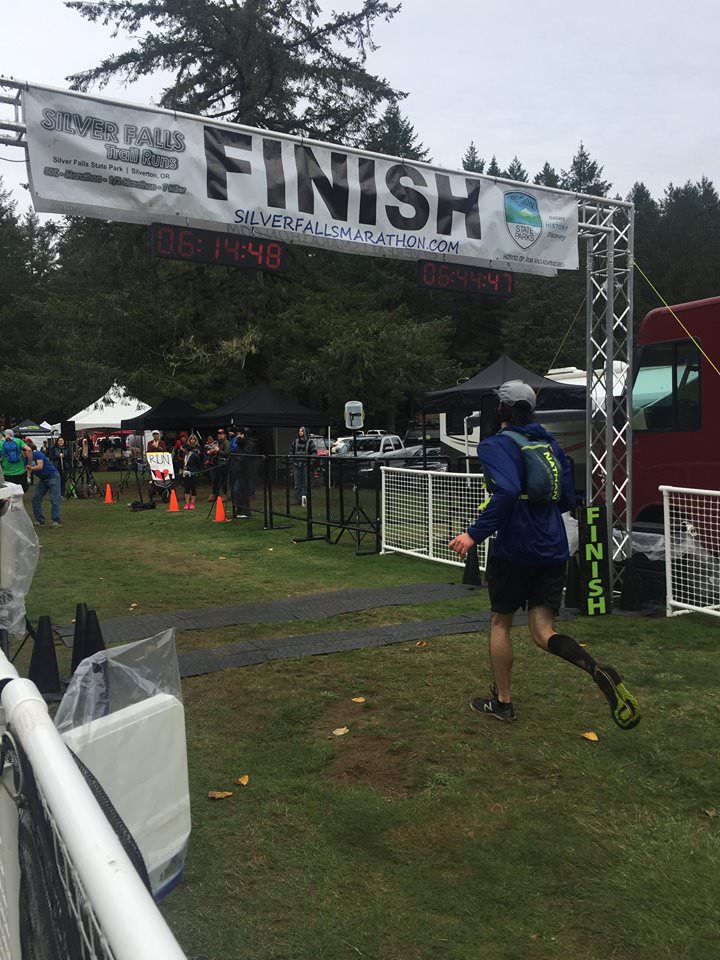 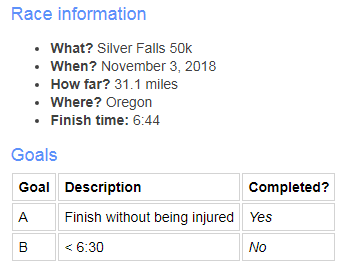 About 4,500ft of gain over the entirety of the course, and a race I'll never forget. Like most other races I had miles left in the tank at the end of the run. My ankle held up, every part of my body and mind held up over this distance! The final result, placing 100/156 finishers, and 100/180 starters. The cut-off time worked out to be 15:00 minute miles, and I finished with 13:02 minute/miles. With practice, spending less time at aid stations, and doing this again, I can easily see dropping 30 minutes off of that time. Running the first marathon with my friend was an amazing experience, and really comforting at certain points where her or I would be struggling. Same with the aid stations, those volunteers are champions, some of those stations are a 10 mile hike in and they were all in high spirits.

The rest of the weekend was spent camping with old friends, new friends, drinking unlimited free beer at the start/finish line, and generally feeling like a badass. I'm an ultra-runner now! Holy shit! 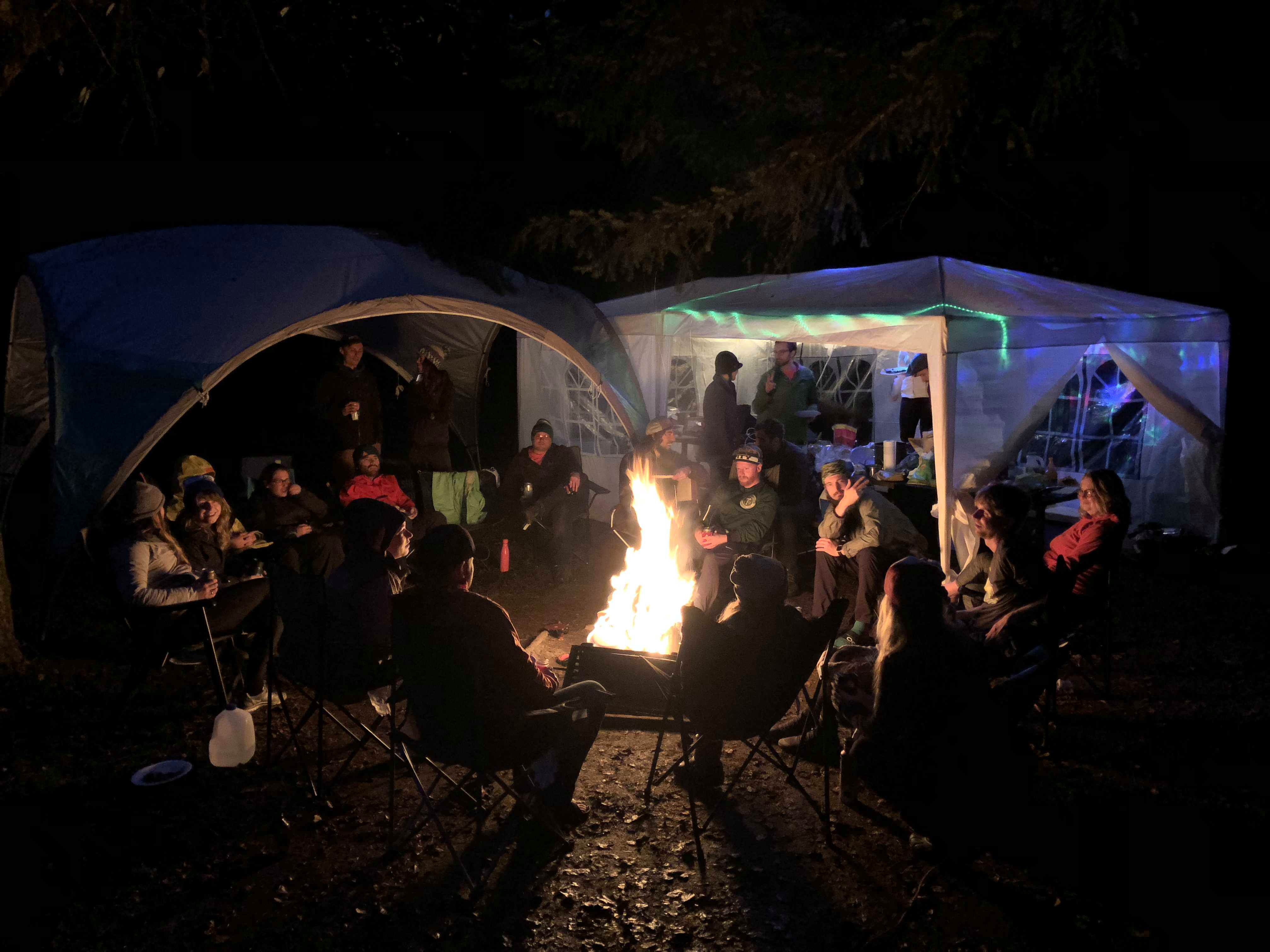